Wriggling up to Hokkaido

June 07, 2012
Hokkaido is the only of the four major Japanese islands that we have not yet visited and today we were destined for Sapporo, the largest city on the island. Hokkaido is not yet connected to the Shinkansen network, so it's a fair ride by train to get up there. 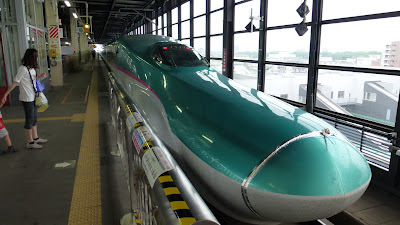 We raced up to Shin-Aomori, the current northern terminus of the Shinkansen line on the latest E5 model train and changed to normal express train. As we departed Aomori we could see the continuing construction of the extension to Hokkaido. 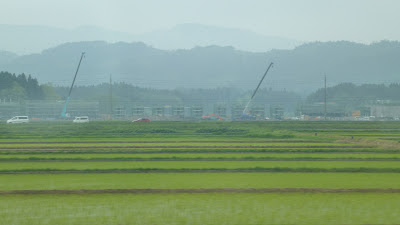 Pictured on the back of the seats is the schedule for traversing the Seikan tunnel under the sea between Honshu and Hokkaido. At its greatest depth the 54 kilometre tunnel runs 240 metres beneath the surface. 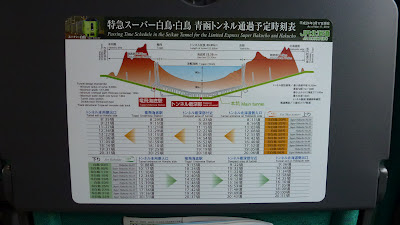 Much of the route between Aomori and Sapporo runs along the eastern coastline, though it sometimes dips into verdant mountainous forest or the rolling hills of rural areas. It feels isolated and wild out here, a different Japan to the semi-tropical southern regions. 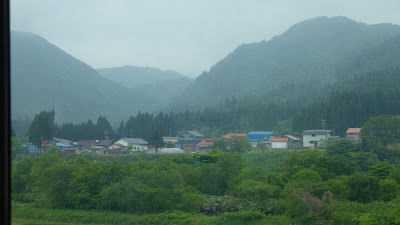 The sea is grey and flat and it is all too easy to imagine a tsunami washing away the small fishing villages along the coast. The houses are are frequently of a curvy 50's or 60's design, quite unlike anything in Australia. There are big collections of fishing nets and floats outside of sheds. Reeds ripple in the wind of the train's passing. 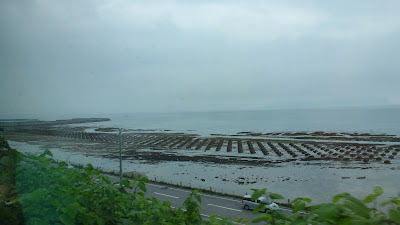 We had a train change at the southern Hokkaido city of Hakodate and have given ourselves a couple of hours to eat lunch and explore. Armed with maps of the city from the Tourist Office, where English was very well spoken, we first wander the around the now closing fish market.

There are rows of big hairy crabs on display and tanks of wriggling squid, which are caught off the coast here. Apart from the stalls of fresh seafood there are places to eat it. One has a big pool where a young mother uses a line and hook to catch a squid. It is then chopped up by the shopkeeper and served cold and still wriggling along with soy sauce. None of us are tempted to try it, but B has a grilled scallop. 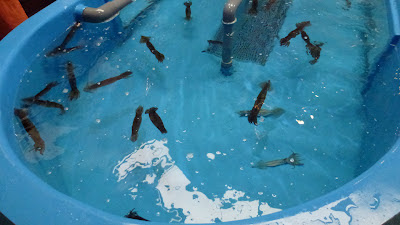 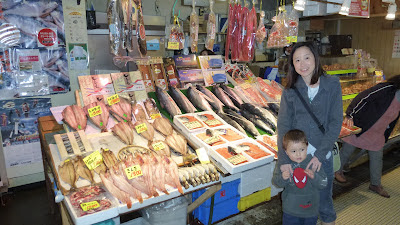 We are hungry and, attracted by samples of freshly grilled crab legs, we sit down in a small restaurant and eat a lunch of grilled crab and bright orange fish eggs on rice, while I have grilled fatty salmon and rice. The accompanying soup was delicious, but I think I prefer my salmon less fatty (unlike the Japanese).

Then we catch a tram one stop back towards the station, where we make a detour into the Wako department store. While B browsers the Tokyu Hands clearance goods at the bottom floor I take Alex up to the Museum of Hokkaido Rail up on an upper floor. There's an entry fee and lots of toy trains for sale. We quickly head back down before Alex realises. 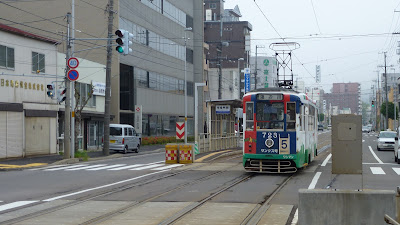 B and I sleep for part of the ride up to Sapporo, while Alex watches videos on a phone. It's very pretty scenery outside, at least until Muroran, which has a huge amount of heavy industry. 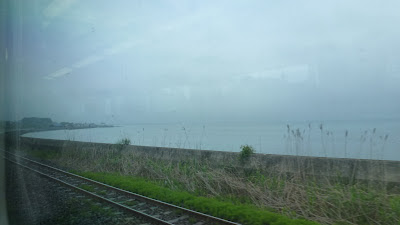 Finally we arrive at Sapporo's huge station complex. After collecting brochures from the tourist office we drag our bags down to the very trendy Cross Hotel. I think I prefer the traditional bathroom of the Osakan version, but it's still very trendy. Uploading of images seems horribly slow, so it may be a while before the photo gallery is available.

We are soon out exploring Sapporo, catching a subway to the nightlife district of Susukino. There are neon lights here to rival Osaka and Shinjuku (well, not quite on the same scale). We locate tiny Ramen Alley, where we sit down in a tiny shop to eat miso sweetcorn butter ramen and gyoza. Probably the most delicious meal that we've had since arriving in Japan. 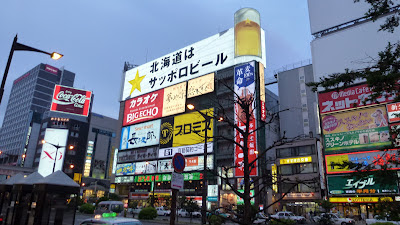 The nearby Lafiler department store has a 100 Yen shop where we buy Alex a couple of cheap toys to keep him amused in the hotel. Then we walk back to our hotel, passing Odori park, where there were fountains for Alex and stalls selling food to accompany beer. All overlooked by the Sapporo TV tower, like a mini Eiffel Tower. 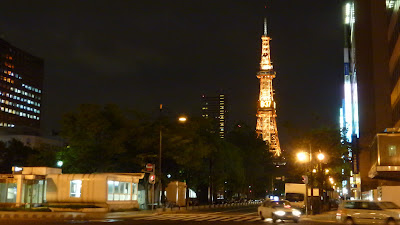 Alex is so unlike the local children. He is so animated, dancing, hopping, skipping his way along, chattering loudly and shouting with excitement. Sometimes he wants to return to the hotel so that he can have some quiet time playing with his toys, but it's fun taking him around, if a little tiring at times.

So far Sapporo seems like a lot of fun. Can't wait to explore more.