There is much to see in the Tohoku region of Japan. I had multiple itineraries planned for today, all of which involved a lot of train travel, the differences being which lines we caught. But after the previous night I wasn't feeling so enthusiastic about a whole day on the rails.

I was looking over some options with B when she spotted my brochure on the Gono-sen line, a scenic route which winds its way around the northwestern coast of Honshu. Ever since seeing a picture on the wall of a JR ticket office in Tokyo I've wanted to go on the Gono line.

Next question, how to get there. Do we go north first or across to Akita?

First B does the washing using the hotel facilities (usually my job and it keeps me up very late), then we have a Japanese breakfast of miso soup, rice cakes, Japanese potato salad and (for a western touch) mini croissants.

I'm still dithering about the destination when we cross over the road to Morioka station. Eventually, we reserve seats up to Hirosaki in the north and then on to the Gono line to Akita.

Most of the view north of Morioka on the Shinkansen line is obscured, but early in the journey there are fantastic views of Mt Iwate, a two kilometre high volcano also visible out our hotel room window, and other mountains, many still with traces of snow. 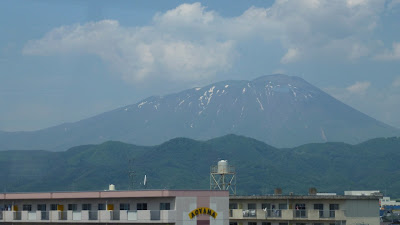 The Shinkansen line ends at Shin-Aomori, itself a recent addition to the network. We then catch a local train to Hirosaki. It's mostly rice paddies and apple orchards out of the window, but as we approach our destination 1.6 kilometre high Mt Iwaki dominates the horizon. 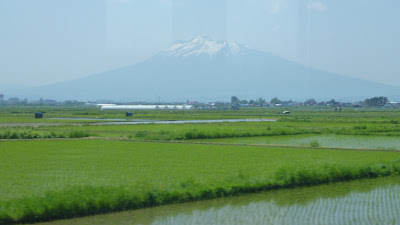 We have less than two hours in Hirosaki before the Resort Shirakami train leaves for Akita, but I have a long list of places to see. We catch a loop bus through the city to the castle park. The park would look grand during cherry blossom season, but it is still pretty now. We walk under the now green canopies of the cherry trees, while Alex has convinced us to buy him an ice cream cone. It feels very peaceful here. 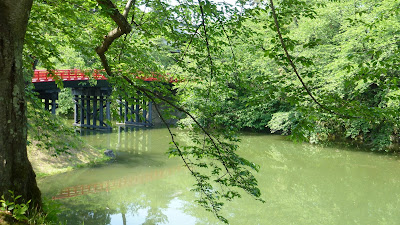 A small castle tower has been rebuilt, but we decide not to pay for entrance. Alex thinks we are going looking for a playground in the park as we try to convince him that there may not be one. 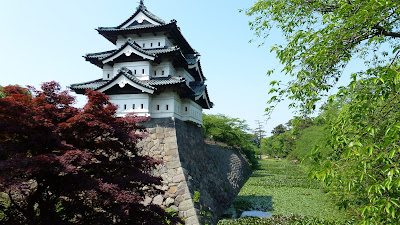 Suddenly, a playground appears. We are saved! Alex slithers down the hot metal slide, goes up and down on the old fashioned (and scary) seesaw and has a swing. The hot equipment makes it easy for us to get him to move along, as we are on a tight schedule. 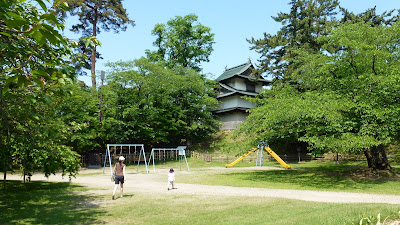 I am disappointed to be missing out on many of the sights that I came to Hirosaki to see. B, hungry and cranky, is upset about spending the rest of the day on the train instead of getting out at all the stops and exploring under the sunny skies. We decide that we might as well forgo the Resort Shirakami and stay longer in Hirosaki. Thanks to my portable internet connection I can check the timetable for returning to Morioka.

The only food we can find in the area is at the Neputa Village. We eat some local dishes, one served sizzling in a big scallop shell and ginger pork for me. Alex likes the port and the cabbage salad that accompanies it. 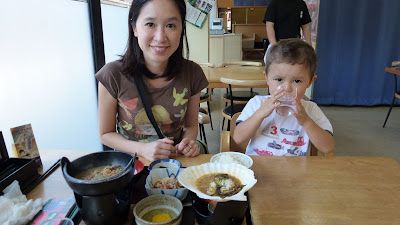 The regional theme fruit is the apple and we go crazy buying apple related produce from the adjacent shop. Then we enter into the attraction I most wanted to see, the Neputa-mura, a museum devoted to the Neputa festival and local crafts.

The Neputa floats are huge paper lanterns that are dragged through the streets during a festival in August. Even in their stationary states they are very impressive and lend the Neputa hall a magical feel. The parade is accompanied by flutes and drums and I was given a turn hitting out a rhythm on a taiko. Then we were dragged quickly through the complex to listen to a shamisen performance. 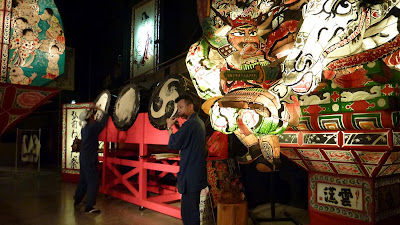 We all sit transfixed as two musicians, one male, one female, pluck out rapid tunes on these stringed instruments.

Then we returned for a more leisurely look around. The museum has working crafts men and women making lacquerware, stitching patterns on cloth, painting lanterns and turning wood. This is the most interesting to observe. 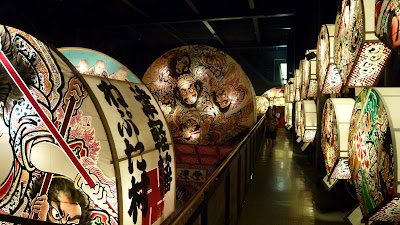 Outside is a garden and fish pond where, for 100Y (~A$1.20), you can feed the koi, who writhe at the surface sucking in air and fish food with their great mouths. 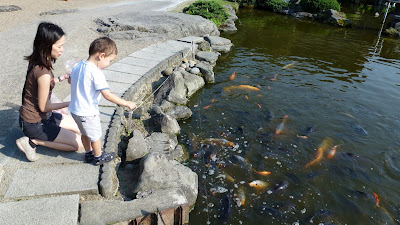 The final section is a demonstration of wooden spinning tops, including one which hides other tops within and another that whistles loud sounds.

It is getting close to time to leave, so we catch another loop bus towards the station. Only it stops at a bus interchange. We decide to walk the rest of the way, but get delayed by a local department store.

While B hunts for Alex's clothes, the little fella makes a beeline for a play area at the back of the building. For 200 yen he gets 30 minutes of playtime on some wonderful indoor facilities, including chasing balloons, a shifting climbing frame and hamster wheel. 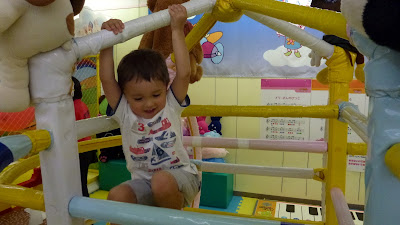 The kids clothes and shoes are really nice but cheap in these smaller department stores. Alex moved on to the next amusement area, which included some pretty sophisticated shop rides (in contrast to the shopping centre rides in Australia). I had to give him the 200 Yen. He was so happy.

There was so much more we could have shopped for him, but we only just made it to the train back to Shin-Aomori on time. From there we catch a nice new green Hayabusa Shinkansen back to Morioka. Alex sleeps almost the entire way. It's a pity he does because he would have loved the washbasin with its combination automatic soap and water dispensers and built in hand dryer. The toilet, lift and vending machine lover is back now that he is in Japan again. 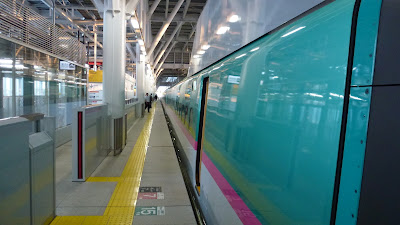 We had a tonkatsu dinner under the station's department store, something simple and delicious. Then, for once, a relatively early night back at the hotel. Tomorrow we head off to Hokkaido, the northernmost of the major islands.