June 08, 2012
Squid ink, sea urchin, sake, beer, wine, pumpkin, sweet potato, horseradish. Not your average dessert menu. But they were some of flavours on offer at Kita no Ice Cream Yasan in Otaru, along with the more normal lemonade, chocolate and white peach. 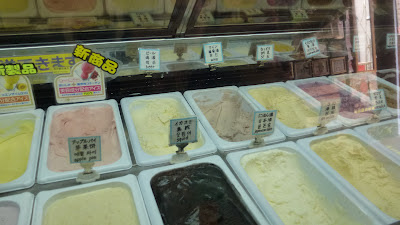 B ordered the black squid ink and sea urchin flavours, while Alex and I have a cone of the visually appealing lemonade and pumpkin. The verdict: Squid ink is okay, sea urchin disgusting, lemonade wonderful and pumpkin not so nice. I want then to try apple pie and white peach, but B won't let me. I suspect that some flavours are only tolerable after a high enough consumption of the beer flavour. 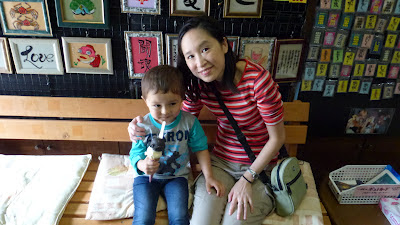 Otaru is a port city about 40 minutes by rapid train from Sapporo. It's the shortest amount of travel we've done in a day so far this trip - even the trip to the airport hotel in Sydney was longer! Once a major fishing port, Otaru has a large number of historic warehouses and a scenic canal still lit by gas lamps at night. Now it caters more for tourists and specialises in decorative glass blowing. 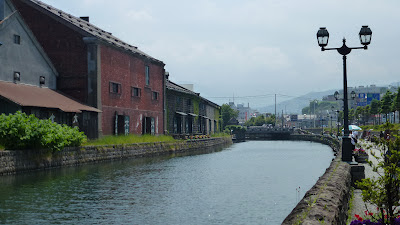 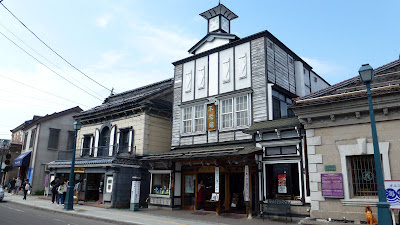 It is quiet a pleasant place for a stroll, though I think the canal would be nicer at some time other than the middle of a summer day. We probably got more out of trying the food on offer. Sadly the great range of seafood was too expensive for our budget after our meals in Hakodate. Instead we took samples of dairy, chocolate and cakes, all of which were mouthwateringly delicious (if you discount the ice cream flavours).

On our way back to the station we stroll along a preserved, but disused, railway line, Hokkaido's first. Alex was requesting that we take him to a shopping centre playground when an outdoor playground suddenly appears to our left. Saved again! 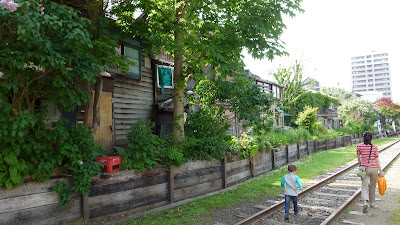 The local department store has a fair selection of Tomy railways, but we decide to wait until we reach a bigger city. No kids play area though.

The train ride between Sapporo and Otaru is very pretty, running alongside the coastline. But we sleep quite long on the way back, I wake just before Sapporo station. 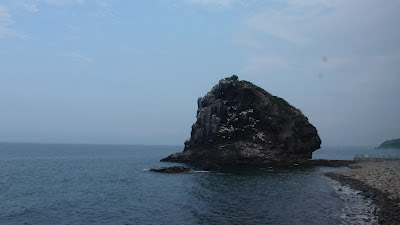 Alex continues to sleep on my shoulder while B shops in Gap, then wants to still wants to play and buy some trains, so we explore the department stores of the station area. No luck. Nothing much at Loft and we resist buying anything at Bic Camera, with Alex complaining that we really wants to play. 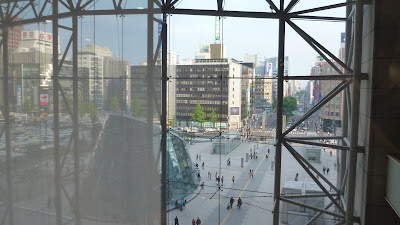 Maybe some food will cheer him up, so we eat a dinner of pasta and pizza, which tastes very different (and nicer in my opinion) than much of the stuff back home. We purchase some desserts from the shops beneath the department store, then continue our search for toys.

At the Tokyu department store, luck! A Tomy railway set is on special and they have lots of toys for the kids to amuse themselves. But it is closing and we have to quickly make our purchase.

Still, Alex is happy now and so are we. We treat ourselves by watching Mission Impossible: Ghost Protocol on the hotel television. It is a rare treat to watch a movie. While the others were washing I watched a travel program about the Gonosen line. A simple travelogue in Japanese with beautiful photography, with a high definition picture it was like riding the rails with them. Much better than the focus on the reporter or crappy photography back home. Wouldn't mind that as a job!

barrych said…
Well, my friend, I am a blogger myself. I have been to Hokkaido before. The best time to visit Hokkaido would actually be between late November and mid-March, which is the winter season in the Northern Hemisphere. Snow is especially beautiful in Hokkaido, of which, I have posted reports about it. You can access these links: