June 15, 2012
The horizon is glowing with the first signs of the new day and we are heading home. I welcome the light and perhaps even the destination, but I am sad that the trip is ending. 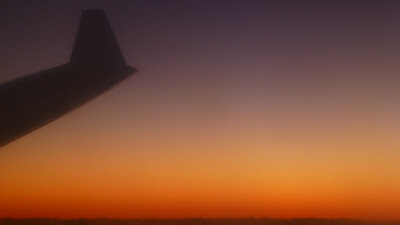 On our final day in Japan we sleep in and do not have our bags packed until check out time arrives. We leave these weighty objects with the concierge and set out for those last few things we need to buy before we return home; bags of quality Japanese shampoo, conditioner and body wash that is so cheap here, so expensive at home. 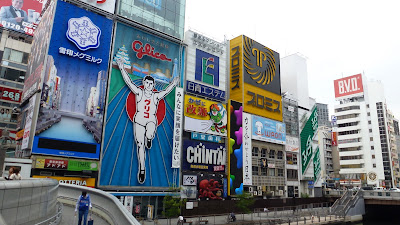 Lunch is yakiniku and fried chicken with rice at an underground eatery. Then we have promised Alex some dessert and all share a plate of deliciously milky ice cream, custard and fruits. The fruits are devoured fastest of all, for we have missed them so much during our trip. 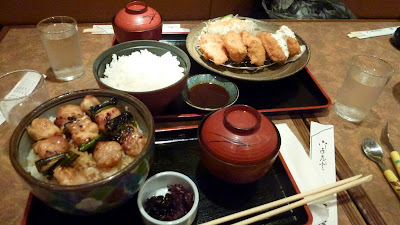 I sacrifice a trip to Den-Den town, so close to us, to buy model railway goods. For I have promised B a visit to an outlet centre. There is one at Rinku Town, but 5 minutes away from the airport.

We catch the odd looking Nankai Rapi:t train with its Darth Vader front and cathedral interior and squeeze our luggage into a couple of coin lockers at the Rinku Town train station. Then it is a 10 minute walk to the Premium Outlets Centre. 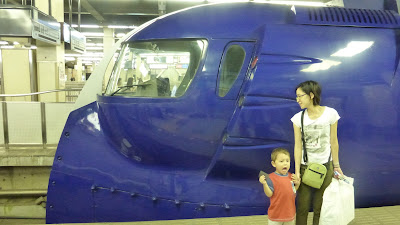 On the right is the Seacle Adventure Town, with its big ferris wheel, so colourfully prominent from the airport at night.We stop at a branch of Yamada along the way, but I am resisting buying any more electronics. Then we arrive at the outlet centre. 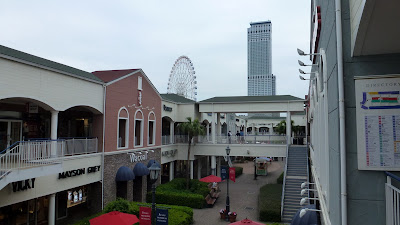 It is exactly what I thought it would be. Mostly branded goods supposedly discounted but still expensive. We buy little but spend far too long there. 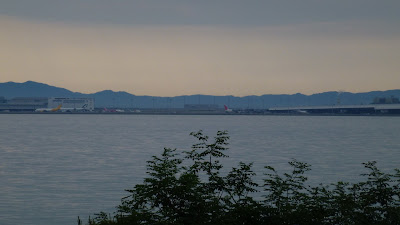 On the way back we walk the opposite side of the road for variety and decide to take a look at Seacle. Argggh! We should have come here instead! Lots of shops selling kids stuff and much of it pretty cheap. I spot a playground at the other end of the building and sure enough, Alex spots it too. We only have a short time before we are due at the airport, but there is no stopping him. I figure that I'll give him ten minutes, despite having to pay the entry fee. 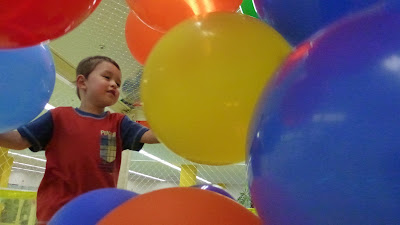 Ten minutes turns into half an hour. There is no way I can deny him a last happy memory of Japan. The playground is so very cool. Enclosures with balloons blown around, climbing ropes and frames on spinning or moving platforms. Wobbly water mattresses and ball areas. Even wooden train layouts. At around $6 for an hour's play it is so much better value, so much fun, in comparison to most playgrounds in Australia. 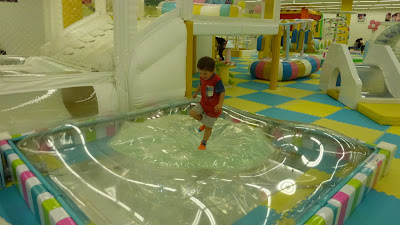 Alex loves it and B has fun shopping for him. By the time we arrive at the airport the check in desk is near closing, but fortunately there is no queue. Our bags are surprisingly even under the prepurchased and business class weights. After bathroom trips there is no time to eat dinner, so we make our way straight to the gate. Fortunately (an inadvertently) we have prepurchased meals for the flight. 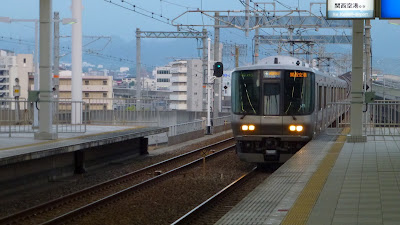 It's white VH-EBC again. I'm so bored of this aircraft. 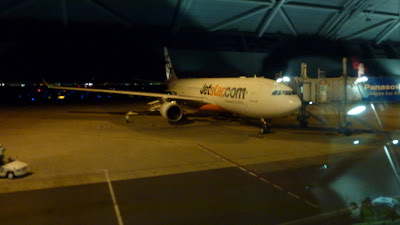 Again, we are separated, B and Alex in economy, me in business. I find myself missing them dreadfully during the flight. I'm already sad enough due to leaving Japan and just want this flight to end as soon as possible. I'm tired and resist falling asleep as we taxi as I want to enjoy every bit of our stay. 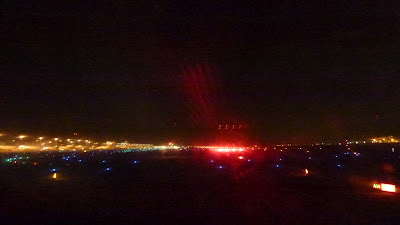 There are some pretty views of the airport and cities below as we ascend into the sky, but we are soon over blackness. The first half of the flight is pretty bumpy and, as the moustachioed captain predicted, the seatbelt lights are required over Guam. I distract myself listening to music and watching episodes of Spaced, Gruen Transfer and Wonders of the Universe on my media players. The power is dead to our seats, despite working on the flight up (same plane, same seat).

The captain announces the half time scores at the State of Origin rugby league match and says that the full time results will be posted at the galleys. I don't care. 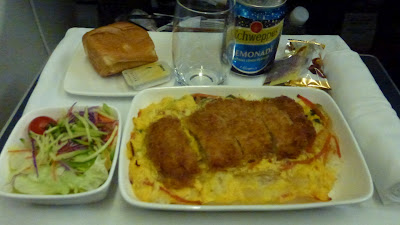 I enjoy my dinner of crumbed chicken and rice and the slice of berry cheesecake, much smaller than they used to give, is very good. I don't think I sleep long either. When I awake after one short nap I see a glow on the horizon. It is the waning moon rising, making silhouettes of the cloud beneath us. Finally there is something to see. 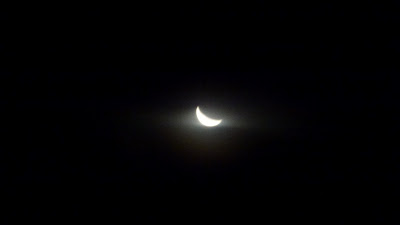 Just north of Papua New Guinea there are some isolated lights shining below and the moonlight shimmering off the water. Then more cloud. The time has flown past quickly.

It is still dark outside when the cabin lights are switched on and breakfast is served. My omelette, bacon, mushroom (yuck) and potato is surprisingly tasteless (actually, not that surprisingly for taste is deadened at altitude). The hot chocolate is still very nice. 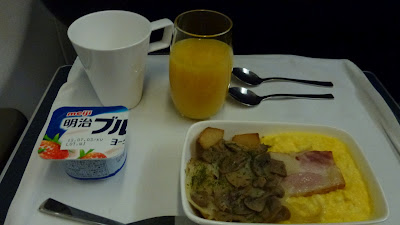 I watch the glow of the approaching dawn outside the window. A couple of planets are visible as reddened spots on the horizon. The sun is yet to rise as we penetrate the cloud layer and descend over quiet seas into the Gold Coast. 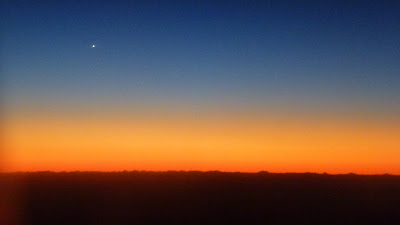 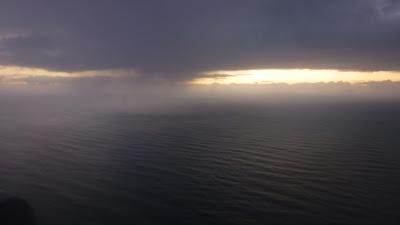 We pass through customs and quarantine with few problems as our food is all kept separate. Then it is back into the domestic section for a little over an hour's wait for our flight to Sydney. Alex and B slept for most of their flight, I am very sleepy. 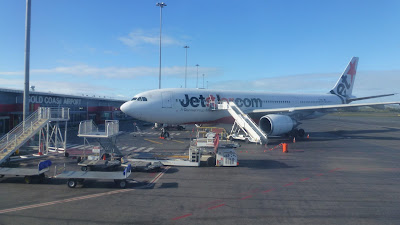 We are all seated together in the A320 that takes us between the Gold Coast and Sydney. I fall asleep during the taxi out to the runway and am surprised to wake up and find us at full power, about to lift off. The other two sleep almost the entire way. I have another nap at one stage, but for most of the flight I enjoy the bright skies outside of the window. I do love these short domestic flights. 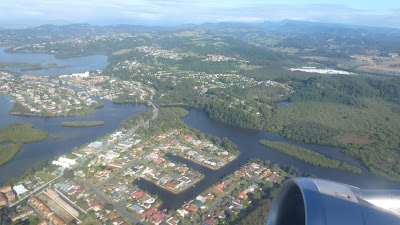 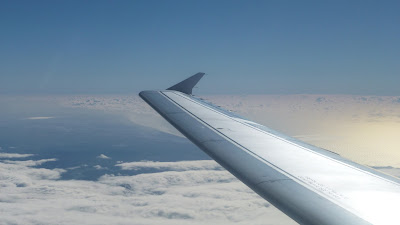 Sydney's CBD is right beneath my window, then we fly over the coast and up over Kurnell on our final approach. Everything looks so clear and it is such a pretty way to arrive into Sydney. Then we are out of the airport and on to a train and a bus for our ride home. 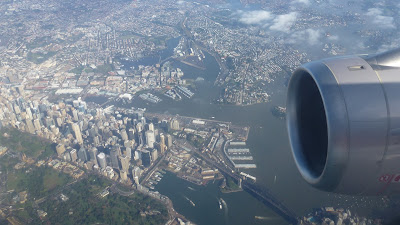 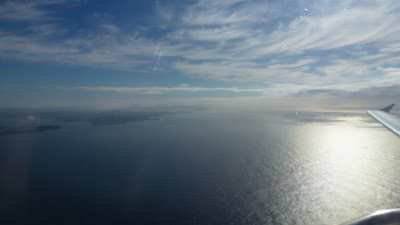 Alex is happy to be home and back with his new toys, building an even bigger train layout. He's been such an incredible traveller again. Kita is so excited when we pick him up from the dog kennel that we pays little attention to his new toys. We enjoy sitting out on the veranda under the cool sun, eating Vietnamese pork rolls from the local bakery.

All of us are sleepy, but you know what, I could go straight back the airport again and up, up and away.