June 05, 2012
It has webbed feet and scaly skin. On its back is a tortoiseshell and lives in the water. It ravishes women and eats children. The only thing it likes better is cucumbers. Should you encounter one, bow low and the pool of water on its head will spill, rendering it temporarily powerless.

This is the kappa, a mythical beast from Japan. Home of the kappa and many other folktales is Tono and that was where we were headed today. 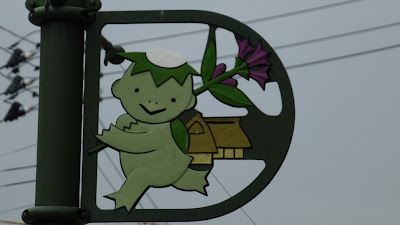 We are in a hurry as usual, just making the Shinkansen to Tokyo. We have been give split seat reservations and I am placed next to a young Asian Australian from Liverpool in Sydney. It is his first time in Japan and he seemed a little nonplussed. But I really wanted to sit next to B and Alex and swapped seats with the passenger next to them.

The ride between Kyoto and Tokyo lasts about 3 hours. It's not the most fascinating of journeys, so I spend the time writing my blog using the Blogger app on my phone (thus the dreadful formatting issues). As we near Tokyo there are some pretty stretches near the coastline. It is too hazy to see Mount Fuji unfortunately. 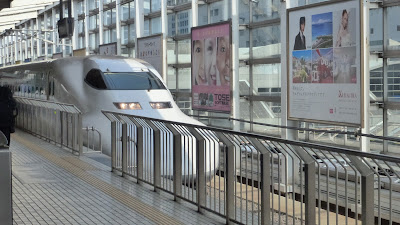 We only have a short time before transferring to the next Shinkansen at Tokyo station. We purchase an interesting bento box and a couple of bread rolls with Japanese style fillings. Then it's off on the Yamabiko Shinkansen.

This is the least comfortable Shinkansen I've experienced. The seats are narrow and we are in a row of three with me in the middle. The scenery outside starts with Tokyo cityscape, then flat plains of rice paddies. As we proceed north the landscape becomes hillier and we pass through a number of tunnels. 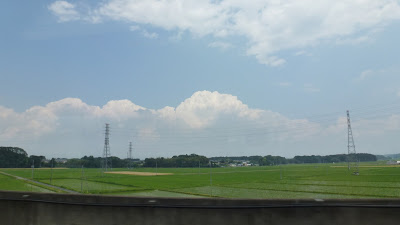 The hazy sky outside has the indistinct outlines of tropical cumulonimbus. We could be in South East Asia right now, but for sitting in a high speed train.

This is the first time we have visited the north. We wanted to last year, but the earthquake and tsunami scuttled our plans.

The journey feels long and Alex demands to go to the hotel. He wants to play. We pass through Fukushima, the nearest major city to the reactor leak. It was too bright to look for the glow!

Eventually we reached Shin-Hanamaki. We have nine minutes to go downstairs, out of the station building and across to a little platform, where a three car diesel train chugs up. We board. 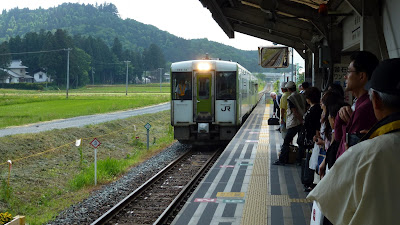 This is how I like it! A little local train chugging along through rural Japan. Tiny stations, each with a kappa motif and pretty flowers planted along the platforms. Little towns and farmhouses cluster around the tracks. Our route follows the river valley, surrounded by beautiful forested mountains. It's a very scenic ride that will undoubtedly be the highlight of the day for me. 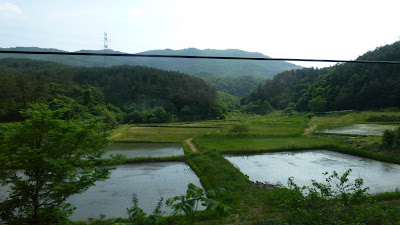 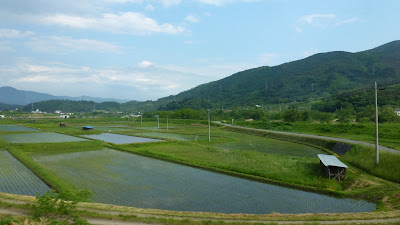 Alex and B play a level crossing spotting game.

When we get out at Tono I feel regret that I didn't book us into the station hotel. The town is very quiet. The tourist office across from the station kindly lets us leave our bags with them. Unfortunately, they have sold out of the English book of the Tono Monogatari, the book of folk tales written down by Kunio Yanagita. Their selection of kappa merchandise is also sadly lacking. I was hoping to pick up both for Alex here, one of the points of our very short visit.

We walk up the main street to the Municipal Museum. The shops are almost all closed, the town is dead. B doesn't like it, but I love the solitude. Alex skips along, telling us to hurry, for it sounds like a storm approaching. Or maybe it's the pachinko parlour. I'm not sure. 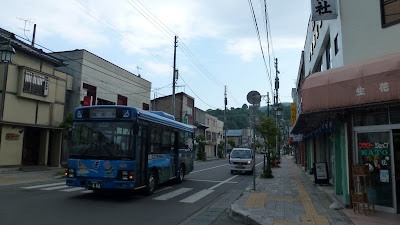 The municipal museum has a quality exhibit of traditional Tono life along with a multimedia display (in Japanese) of the folk tales. Unfortunately, we leave it until last, when the movie ends, and now have to hurry back to the station. Another disappointment as that was why I brought them along to the museum. Alex did have fun playing with some traditional Japanese toys. 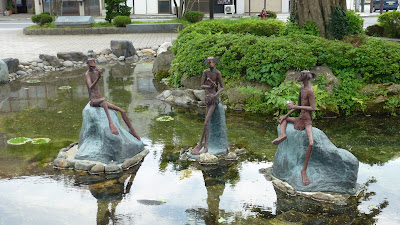 There is a fair crowd waiting at the train station when the single carriage rail car trundles up. There are noisy Canadian business people and school kids in the car. We have pretty views of the late afternoon sun shimmering off the rice paddies as we return down the valley to Shin-Hanamaki. 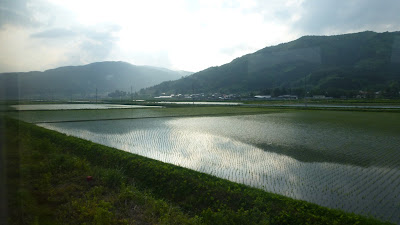 It's almost an hour wait until the Shinkansen that will take us to Morioka. Shin-Hanamaki station is in the middle of nowhere. There's some sort of building opposite, maybe a (closed) coffee shop inside there. The station building itself has a small noodle restaurant/bento box seller, a convenience store and a tiny cracker/gift store. There is a waiting room with a local tourist display and what looks to be a foot bath, but the display and bath are closed by the time we enter.

Again, I love this isolation, the silence that surrounds us. The sun is setting with a yellow/orange glow in the smoky sky. 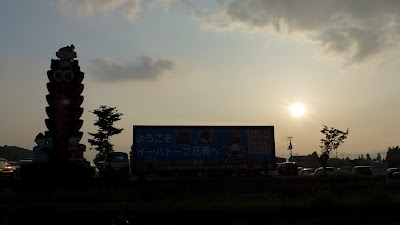 It sets entirely during our short ride to Morioka. The sunset behind the mountains is like a scene from a post card. 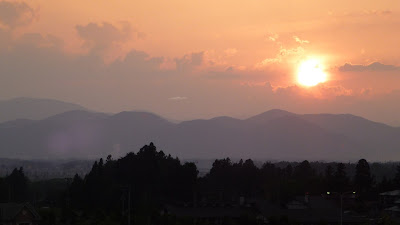 The Toyoko Inn is close to the station. We drop our bags and go to find some dinner. Spruikers convince us to try a traditionally decorated downstairs restaurant, where we take off our shoes and sit in private cubicles. We eat cold spicy ramen and seafood nabe stew both flavoured with kimchi, and some yakisoba for Alex. 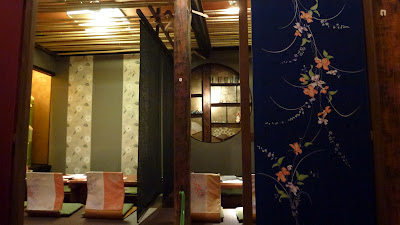 I'm  feeling dizzy and when I get back to the hotel, most of the dinner returns the wrong way into the loo. Oh no, radiation poisoning from Fukushima! Or more likely, not enough sleep.