On the ropes at Sounkyo

June 10, 2012
There is snow around, the peak of the mountain is up ahead and I'm wearing a t-shirt. Even I feel a little cold right now but I know that a hot bath lies ahead. Or below us, as was the case right now. 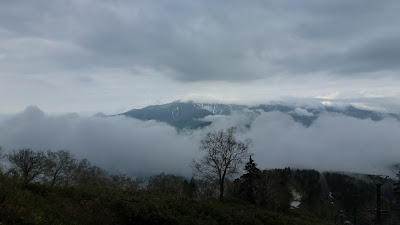 We were up Mt Daisetsuzan, overlooking the beautiful Sounkyo Gorge in Central Hokkaido.  The steep gorge is lined by sheer rocky cliffs and topped by rock formations like crumbling castles. 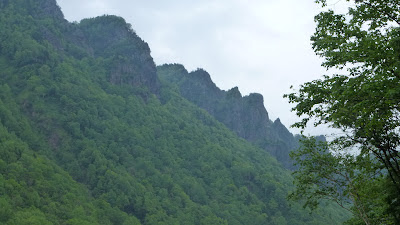 Thirty thousand years ago a volcano exploded filling a valley with its pyroclastic flow. The molten rock cooled quickly into hexagonal columns. At the end of the last ice ago a glacial lake dammed by ejecta from the volcano broke through and quickly eroded the rock, causing the tall columns to collapse, creating Sounkyo Gorge.

The National Park Information Centre has an English subtitled video of the formation of the gorge, along with scary looking stuffed bears. 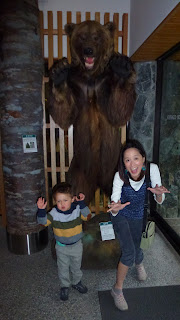 When we left the hotel, late, I hadn't made up my mind whether to go to Sounkyo or take the easy option and visit Noboribetsu Onsen and perhaps the volcanic Mt Unsan. The problem with the latter is that we would be retracing our train ride between Hakodate and Sapporo. With Sounkyo it would be a ride into the centre of the island and a chance to see something different. Asahikawa station is very attractive, modern, but with decorative wood fittings used across the interior. It feels new, spacious, quiet. We have twenty-five minutes to buy a bento box for lunch, let Alex purchase our drinks from the vending machine. 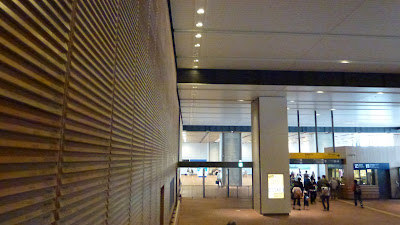 Then we board the single carriage diesel railcar for Kamikawa. It chuggs away noisily through the rice growing countryside until we eventually begin our ascent into the hills. No tall bamboo forests here, unlike in more southerly Japan. 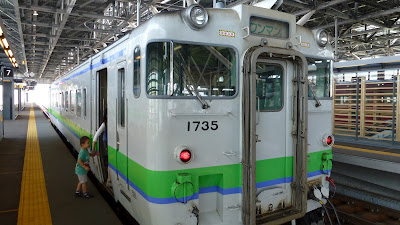 Kamikawa station is quiet. We follow the signs to the bus and tourist information office, but there are no attendants.

A bus pulls up and we board, but I hear the announcement that it is bound for Asahikawa in time. The next bus to Sounkyo is too late, so we walk across to the single taxi waiting at the station.

"How much to Sounkyo?" I ask in my limited Japanese.

"Go sen yen" is what I hear in reply.

Actually it is 5,000 yen, after which he switches the meter off. Expensive, but at least we get to Sounkyo. 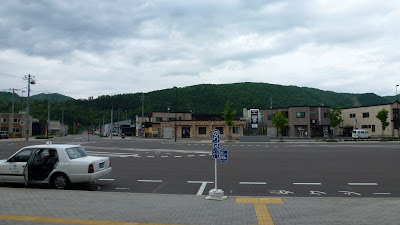 The drive up along the river was very scenic, but the sight which awaits us is even more so. 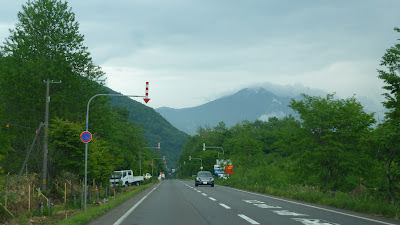 Sounkyo Onsen is a small village, consisting primarily of resort hotels and small shops and nestled at the foot of Mount Daisetsuzan. It is drizzling and I am sent on a mission to find an umbrella while the other two wait in the national park visitors office. 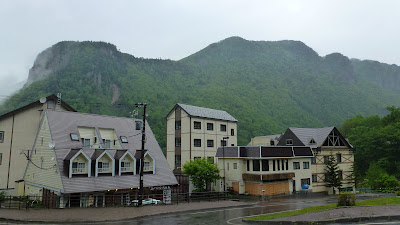 Returning unsuccessful, we quickly walk up to the Daisetsuzan Ropeway, whereupon we found cheap umbrellas for sale. The two big gondolas can each take 106 people, but there are only four aboard now, plus one attendant, for the ride partway up the mountain. 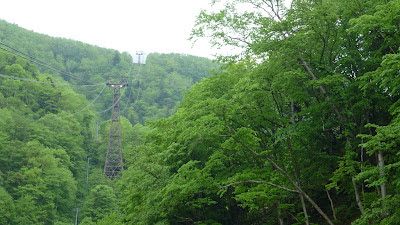 This is not a ride for those who fear heights. There are impressive views of the township and river before we enter cloud. 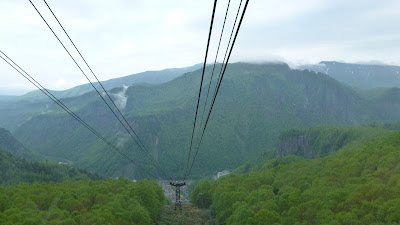 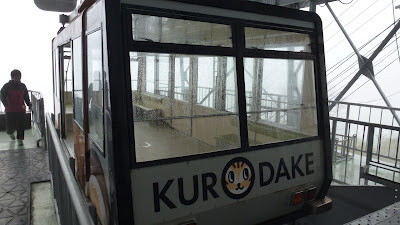 At the upper terminus there is a 200 metre walk to a chairlift towards the summit. There are patches of snow along the way and it's cool and hazy, but we know it will be fun. B equips herself with a loan raincoat. 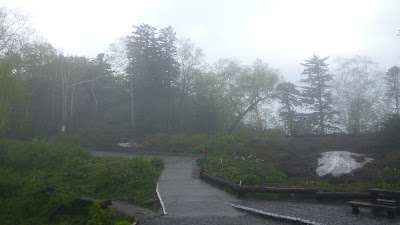 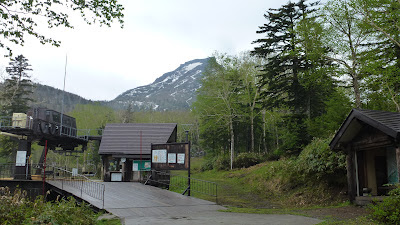 Indeed, it is quite a ride, especially when we penetrate the cloud and are rewarded with incredible views across the mountains. It is like flying. The forest has also changed from conifers to birch. 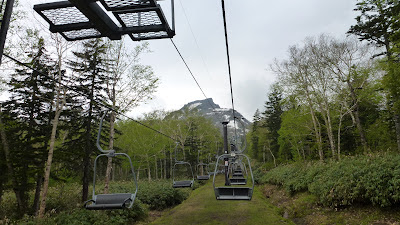 We can only stay a sort time at the top. It is very chilly. The snow mounds are melting and streams of cold water are running down the side of the mountain. Above us looms the summit, a 1.7 kilometre walk away, but only if you are properly decked out for hiking. 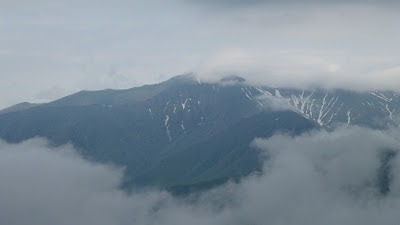 More brilliant views await us on the ride down. We warm ourselves in front of a gas heater while we wait for the next gondola down. 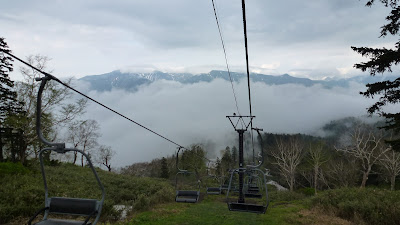 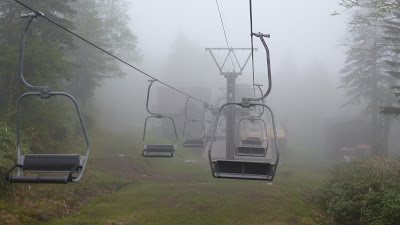 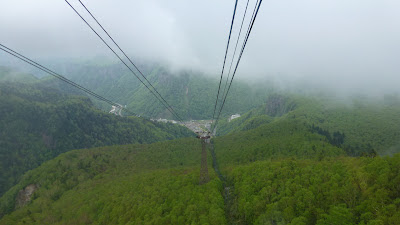 This is an onsen village and we can't leave without having a bath. We find the public bath house, B and Alex go one way and me the other. Bowls of hot water poured over the body to cleanse, then into the stone lined bath. It feels so good! 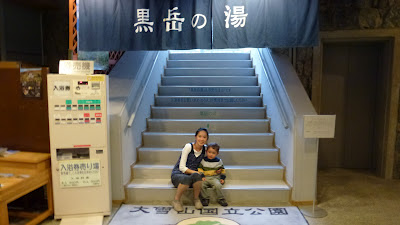 Just before it's time to get out and meet the other two I discover an outdoor bath. The contrast between the cold air and very hot water is delicious.

My body feels so good after that bath. I can understand whatever curative properties that are ascribed to the mineral springs.

We now have to rush to catch the last bus back to Kamikawa. Only, it is late. We arrive at Kamikawa and there is a railcar already at a far platform. I'm not about the timetable back to Asahikawa. Is this our train?

We race across the bridge and I ask the driver. Yes, it is our train!

We are hungry. It's dark outside, dinner time. But how much time before we leave? We don't risk a trip back out to get snacks. But there is plenty of time. The car is full of highschool kids, as noisy as schoolkids are everywhere. 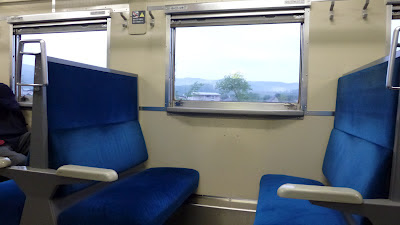 It is a long ride in the dark countryside. Eventually we arrive at Asahikawa and while I reserve seats B buys bento dinners.

We are so used to punctual Japanese trains that it is a surprise when the Super Soya arrives ten minutes late. This train has come from Wakkanai, the furthest north that you can go on a Japanese train. The train interior is pretty cool, with panoramic windows and a view out of the rear. But we just wanted to get back the hotel. 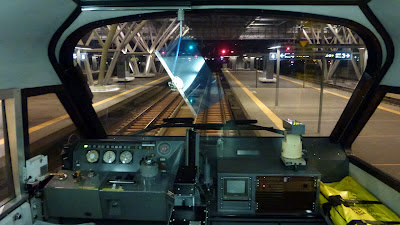 It wasn't until after 10 pm that we achieved our wish. No using the hotel luxuries tonight. It's an early ride back to Tokyo tomorrow.