June 13, 2012
Just for once I'd like an overseas trip where I've got nothing but a small pack on my back. Right now I feel like a pack horse. There's a huge and heavy suitcase pack on my back, a full daypack on my front, one hand is dragging a big roller bag and the other is carrying plastic bags.

They were previously much lighter but now they have bags of shampoo, Alex's toy trains, snacks, clothes purchases, gadgets, spare umbrellas and more.

I do so love the things they sell in Japan, but I increasingly hate shopping while travelling. I find standing around waiting in shops far more tiring than long walks exploring.

Fortunately the commuter trains we catch in Tokyo and Osaka today are not packed as I am taking up the space of more than two passengers. We say a sad goodbye to the trusty Prince hotel in Shinjuku and ride the Chuo Line to Tokyo station for the Shinkansen to Osaka. 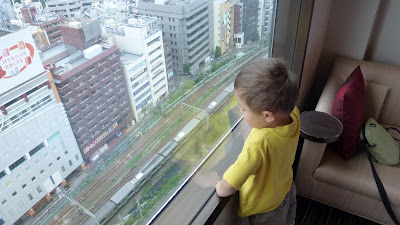 B gets lost in Tokyo station while hunting for some food. This is why we usually can't go separate ways while travelling.

Our Hikari Superexpress shoots us out of Tokyo along the Tokaido line. Are were quite a few foreigners in our carriage. The route seems prettier today than normal. I am surprised to see magnificent Mount Fuji out of the opposite window. I had assumed it would be hidden by the day's grey skies. 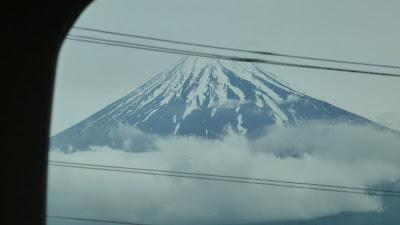 The train skips past sea and through mountains, by tea and rice plantations and grey cities and factories. We all fall asleep and miss Nagoya station. 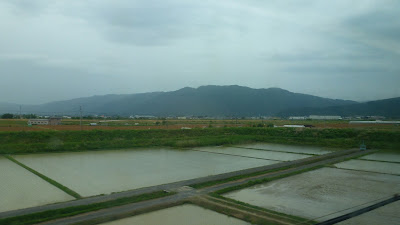 Most passengers disembark at Kyoto, but we continue along to the terminus of Shin-Osaka. There we make Alex very happy by purchasing tickets for the subway. He is disappointed by our JR Passes, because they don't allow us to use automated ticket gates.

Osaka's Namba station area can be quite confusing, despite the number of times we have used it before. Eventually we find the Swisshotel that sits atop Nankai Namba. It feels so different to the other hotels we have stayed at in Japan. Lots of Americans, lots of fawning service. We are a little uncomfortable. If not for a great deal and location we would not normally have booked this kind of hotel.

The views from our room are spectacular, overlooking the landmark Tsutenkaku tower, though it's most notable at night. Still, no time to admire it, we have lunch to find. 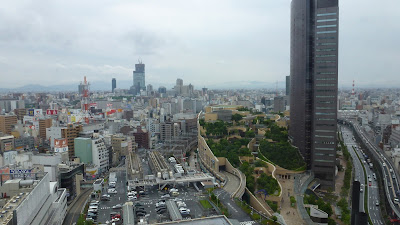 Descending back up Namba we search for somewhere selling okonomiyaki, the Osakan cabbage, egg and meat "pizzas" cooked at your table. After a long hunt we find a branch of Fugetsu. We've dinned at a sister branch in Umeda a couple of times. No queues today, there is only one other table of diners as the cook mixes up the ingredients and shapes them into a circle on the hot plate. 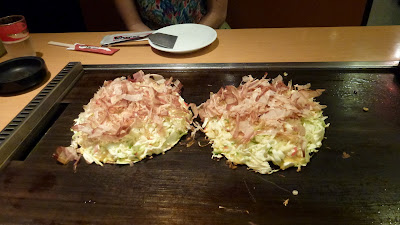 Shopping time along the long, long arcade stretching from Namba to Shinsaibashi. Alex complains that he is still hungry and near the end we relent and buy him a hamburger from a Lotteria. Then he's much happier, but we discover that our favourite homewares store Loft has disappeared. 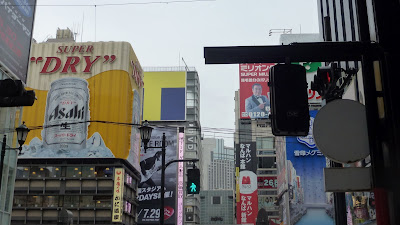 An internet search locates it at Umeda, so we catch the subway to there. It's quite far from the station and we need directions from the information desk. Through the dated gloss of Hankyu we emerge into a very modern looking shopping area. 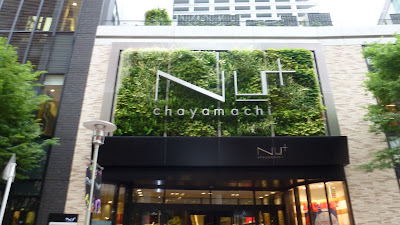 We buy knickknacks from Loft, but cannot find a foldable "floor couch" that we tried to order online, only to have the order rejected due to the difficulty of shipping it. Loft has some very nice Kansai Airport gear, but there is nothing I can actually use, so it stays unbought.

Alex falls asleep on my shoulders as we discover a branch of Tower Records. I leave him sleeping on a seated B's lap while I look through the soundtrack selection. More limited edition soundtracks, including one that I had ordered from a third party dealer on Amazon for a big markup. Should have waited until Japan! These aren't available as MP3 downloads.

B wants shabu-shabu for dinner. Rather than hunt for it along touristy Dotombori street I suggest we look around here. There seem to be a number of eateries along Kappa Yokocho (Kappa street), but none sell shabu-shabu. We ask at a hotel and they direct us to the lower basement floor of Hankyu station. 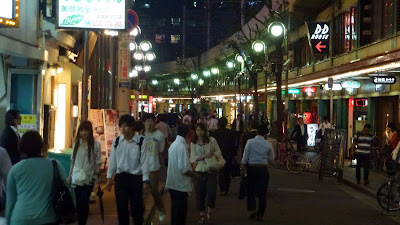 On the way we pass a row of somewhat murky fish tanks build into the walls of the walkway, and two levels of Kiddy Land, which has a huge range of toys, from Miffy and Gaspard and Lisa for the young ones, to Anime cartoons. Alex plays for a while with a wooden Thomas layout. 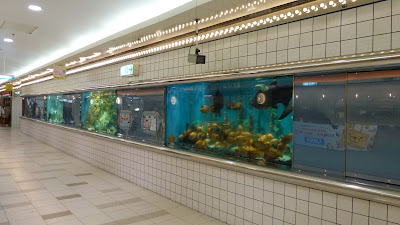 The shabu-shabu restaurant is perfect. You cook thinly sliced meat and vegetables in simmering kelp and soy stocks, then dip them into ponzu or sesame sauces. This was an all-you-can-eat restaurant,  though Alex didn't eat so much, until it came to noodles simmered in the broth and the included soft-serve ice cream. 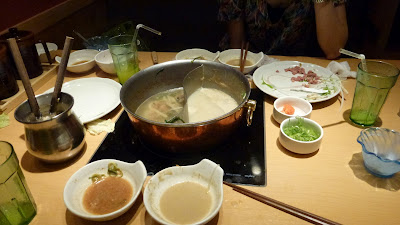 It us past 9pm when we return to the hotel. Most shops and many restaurants are closed or closing soon. B and I get sucked into watching the reimagined Star Trek movie on the television and stayed up late indeed. But we can sleep in. 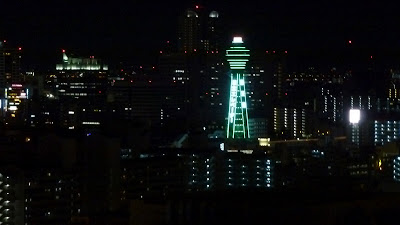 Last day and I am so very sad to be leaving Japan soon.