June 11, 2012
Last night I was watching a Japanese documentary about a future volcanic eruption of Mount Fuji. Now we are going to the scene of the action, in more ways than one. As B ascends what was once the world's tallest roller coaster, Fujiyama (literally Fuji Mountain) Alex and I gaze upwards. It's nice having a little excuse to stay down the bottom. Not that I need one. There is no f#!$ing way I'm going up there. 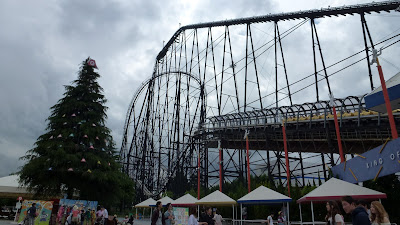 Behind us there is a blast of compressed air as cars shoot out and up of Dodonpa, another roller coaster, the world's fourth fastest and still the highest acceleration.


We are at the FujiQ amusement part. If the weather was nice we would have a magnificent view of Mount Fuji. Instead there are grey clouds above. But we didn't come here for sightseeing, or even roller coaster rides. Not really. Instead, the main attraction is Thomasland, a Thomas the Tank Engine themed section of the park designed for young kids.

We had caught the Holiday Rapid Kawaguchiko train direct from Shinjuku to the Fujikyo Highlands station. It was an old set, and the ascent up the private Fujikyu railway section was at a snail's pace, but the mountain scenery was beautiful. 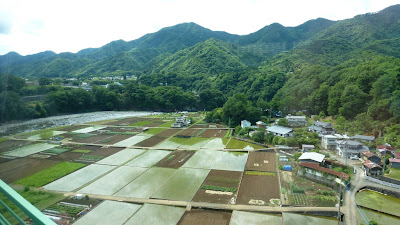 We purchased park entrance tickets, rather than inclusive of rides, as we figured we wouldn't make full use of them. Most of the Thomasland rides cost 200 yen.

Alex and B start with the Fluffy Cloud adventure, a mini overhead roller coaster type ride suitable for young kids, Alex just making the height limit. I think he enjoys this ride most of all. 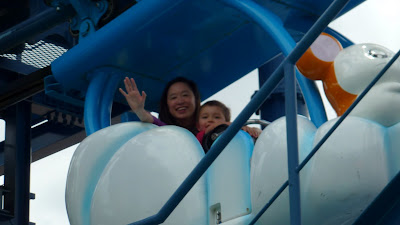 Nearby is the Great Zaboom, where boats plunge into the water, the occupants wearing raincoats.

Fortunately, he is well below the height limit for that ride.

When we reached Thomasland it is my turn to ride with Alex behind James on a miniature railway. It comes to a station shop and here we get stuck for a while. In addition to all sorts of Thomas paraphernalia are a couple of tables of wooden train layouts. Alex and other children play and play with the trains, lost in their imaginary worlds. 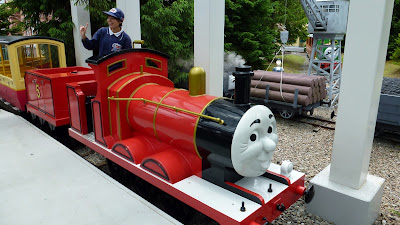 It is very difficult to get Alex way, but we let him on the smaller Thomas version of the Great Zaboom, the Uki-uki cruise, which is a lot less splashy.


Alex is getting a little cranky and demanding to return to the shop, which means its time for food. We had wanted to visit a Mos Burger and fortunately there is an outlet on site. Convincing him to eat was a problem, but we enjoyed our shrimp and teriyaki burgers. 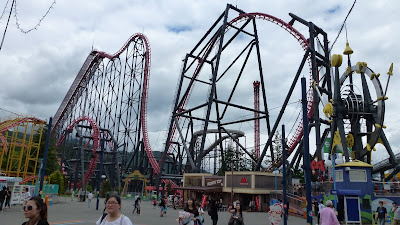 Alex and B had a ride on the horses of the Merry-go-round. That's four countries he's ridden carousels on now. Then we returned to Thomasland where the three of us had a rocky simulated boat ride on Go! Go! Bulstrode! (enough to make me nervous about turbulence on the flight home - I'm such a wuss). B and Alex squeezed into a smaller Thomas merry-go-round, the Minnade-Twist, which Alex loved second best of all for the day, happily shaking the tambourine provided for the ride.

B was determined to go for a ride on a roller coaster. While she joined the long queue, Alex and I ate ice cream below and tried to pick her ride out. At the end she emerged stunned and told us that she closed her eyes for a lot of it.


I had hoped to get my taste of more cerebral than physical fears at the Ultimate Horror Labyrinth, but there wasn't time.

We just made the Fujikyu Railway express down to Otsuki. The train backs up for one stop to Fuji, where we saw a Thomas themed set departing the station. Pity we weren't on that one. 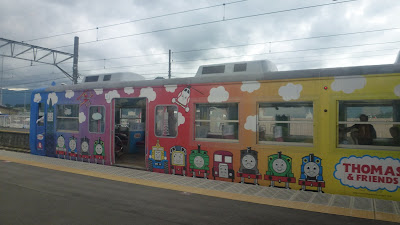 The old rollingstock had huge amounts of legroom. Another pretty ride down the hills and past the little townships. At Otsuki we encountered another Fujikyu train that was painted with a face and tongue poking out. Then we changed to the JR line to Shinjuku. Fortunately we were able to get seat reservations onboard as we had entered far away from the reserved section. 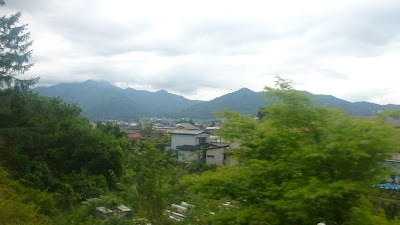 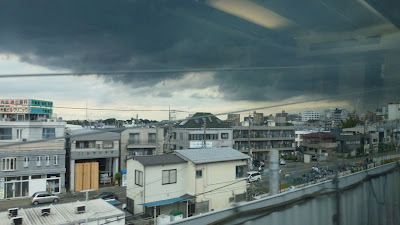 After arriving in Shinjuku the rest of the evening was spent shopping, before we had dinner at a couple of sushi trains. The first only served sashimi, which I'm not a big fan of, so we returned to Sakurasushi, right across from our hotel and an old favourite of ours. Alex even ate some, though he seems to have gone off raw salmon. 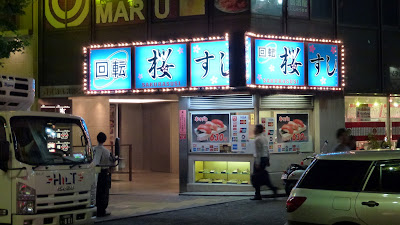 As I get ready for bed, Japanese television tonight is showing some analysis of the upcoming Australia versus Japan soccer match and teams of school girls hitting each other over the head with toy hammers in front of a host who looks like a Japanese David Sowerbutts from Psychoville. Goodnight!