June 16, 2008
We made it home from Osaka. There is a special feeling that comes when your arrive at your house after a holiday. It is utter relaxation. No longer do you need to worry about other language or customs. There is no need to look up directions, to plan out your day, to journey between sights.

Then again, you now need to clean up your own mess, to make your own bed. Rather than eat out you need to cook your own dinner. The shower is weak and the toilet doesn't wash your bum. And you need to wake up early tomorrow morning in order to spend a day at work. You are back to your old routine.

Looking back upon this holiday in Japan I've decided that the theme of running water has applied to each of the days.
As I remarked earlier it feels so unusual for a person brought up with severe water conservation to see so much water everywhere. I don't know that the Japanese waste more water than Australians, but I suspect that there is more to go around.

Our final day in Osaka was spent doing more shopping. We returned to Den-Den town in a largely unsuccessful hunt for model railway parts (seems to be a shortage of Tomix points), though B did buy me a nice birthday present. For B we explored the department stores. And my arms were very sore from lugging six liquid soap refills and other assorted cosmetics/washing products through crowded shopping arcade. They will hopefully keep us going until our next visit. The Japanese make wonderful body wash products, it feels like even cheap hotel rooms stock high quality shampoos and soaps. 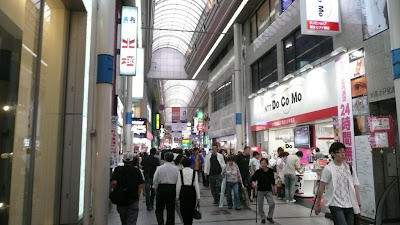 The Nankai Rapi:t returned us to Kansai International Airport as it started to rain outside. We discovered that our flight was delayed by a few hours, but all the shops were closing airside. I attempted to post a blog entry using the free wireless access, but kept losing all my work thanks to my clumsy fingers on the Sony Mylo. 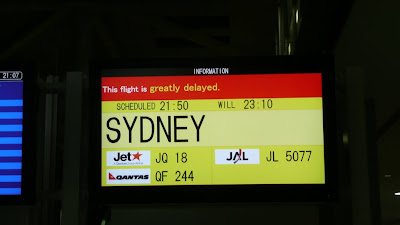 I was feeling a lot of trepidation about the upcoming flight. All I wanted to do was have a shower and sleep, but what I expected was a turbulent and uncomfortable 10 hours in the air. I wished that there was a magic portal that I could use to pass between the two countries. 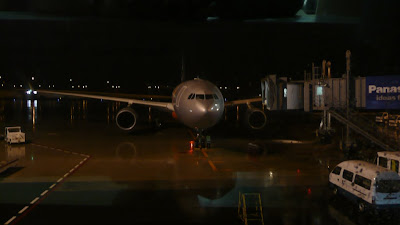 Well, the flight was quite rough, with the seatbelt light left on for quite a long period initially as we bumped and shook in the high clouds. I was glad we were seated in the over-wing section. It did level out somewat after a while and I even caught a little sleep.

Overnight flights are generally uncomfortable in economy class as it is difficult to sleep on the seats. Most of the cabin screen entertainment was not particularly interesting, though I half watched Charlie Wilson's War, which was okay. However, night flights can offer their own form of beauty, sailing high above the Earth in a darkened cabin while the land below sleeps.

I watched the yellow moon set in the west, beneath the high clouds. Once its glare was lost, the stars were revealed, with planet Jupiter bright against the cloud of the Milky Way, so much more rich and beautiful than you can see from a city.

I knew when we were approaching Guam by the storm clouds that flashed beneath us. Things got rough, with the pilot steering us between the clouds.

Dawn lightened the sky as we crossed over Papua New Guinea. I loved the orange light that suffused the dark cabin. The flight became smoother once we tracked along and over the coast of Queensland, flying high above a carpet of cotton wool clouds that stretched out forever. 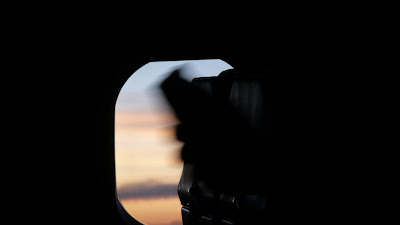 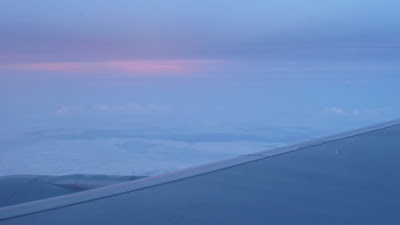 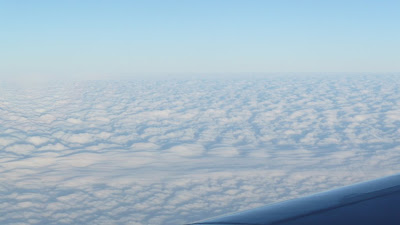 I was glad for the break at Brisbane airport during the brief transit, enough time to stretch the legs, empty the bladder and grab a drink of milk. Breakfast was various rolls brought over from the amazing food section of Takashimaya.

We reboarded our aircraft for the, thankfully brief, flight to Sydney. With tired legs we disembarked from the aircraft for the last time. It didn't take long for us to collect our baggage and pass through customs, then we were out, back in our home city! 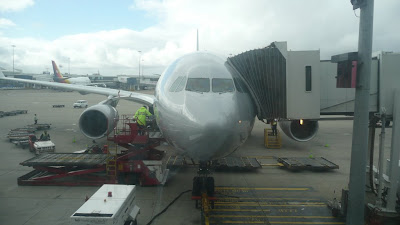 I'm glad I had another chance to visit Japan. I love the country, the scenery, the people, the goods, the foods. I know that I'll want to go back again, and again. Hopefully I have returned this time inspired and enthused. For a short time, at least, I am satisfied and happy to be home.

Anonymous said…
hi, just wanted to let you know i really enjoy reading this blog! i find your comments really interesting and your insights much similar to my own when i travel- im off to japan for the first time flying jetstar in dec08. any tips or suggestions? keep up the great blogging!!
Much Appreciated, Amanda.
23 August 2008 at 14:31

Thanks for your comments! I have lots of tips and suggestions for Japan - it just depends on what you are interested in doing and where you are planning to go. Note that Winter is the one season that I have never visited Japan, but I certainly enjoyed watching the snow go by while catching a train in the Japanese Alps past Takayama in early Spring.

If you are interested in what to do with Osaka or Nagoya as a base see:

Osaka to Tokyo
Photos
Japan related posts on this site

Tokyo as a base:

I would also add Nikko as a daytrip from Tokyo - saw it on an earlier trip than the one above (we've been to Japan 6 times).

Some of my top spots include Tokyo's Shinjuku district at night, Kanazawa and Takayama.

A Japan rail pass is fantastic if you will be travelling long distances, even Tokyo - Kyoto return is worth it.
23 August 2008 at 18:10