Bring you a roman

June 09, 2008
Sweet hearts and dreams bring you a roman. Or so says the cover of the Matsuyama brochure handed to us at the tourist office. What it means, I have no clue.

It's been a day of strange things. We squeezed on a subway train to Shin-Osaka station, exchanged our JR Pass vouchers for actual passes and hopped on a Shinkansen Hikari Superexpress to Okayama. It was one of those purple coloured sleek Shinkansens like the one that runs around my desk at home, only this one wasn't N-scale. 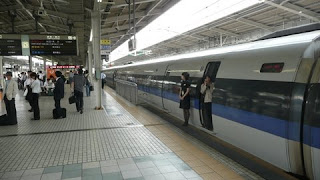 Okayama is known for its peaches and grapes and we couldn't resist some peach sweets from the gift shop. While waiting for the train to Matsuyama we also found a branch of one of B's favourite clothes shops.

When we arrived at our platform we noticed people crowding around the train with their kids. It was colourfully decorated with Anpanman, a very popular Japanese childrens anime television series. Before boarding we also purchased a bento box full of yummy goodies, like wasabi potato salad and grilled salmon, to eat on the train. 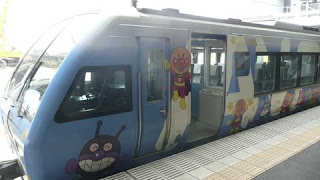 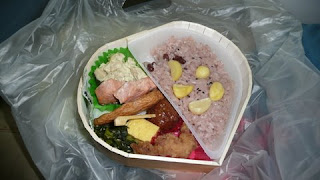 It was quite stuffy inside of the train and the two and a half hour journey felt very long. However, the route was very scenic. Soon after Okayama we crossed over the massive Seto-Ohashi Bridge between the main island of Honshu and on to Shikoku. The bridge skips across smaller island, but at quite a height. Once on to Shikoku we crossed over shipyards fitting massive spherical gas tanks. 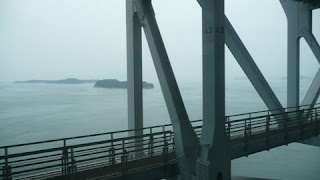 Once on to the island proper we passed through endless paddy fields and farms. Most were brown and unplanted. In the background were mountains with forests of trees and bamboo, to the right we could often see the ocean. 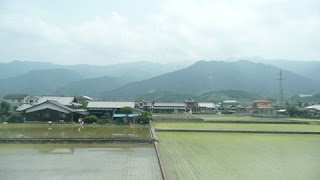 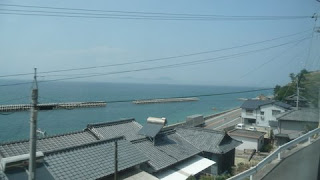 To our great relief we arrived in Matsuyama at quarter past two in the afternoon. The station tourist agency assisted us with his limited English to find accommodation, which is at the New Kariwara Hotel, very close to the station itself. The rooms is pretty basic and they encouraged me to use the free lobby computer for internet access rather than the 1000 yen in-room system (probably requires a knowledge of Japanese). Very convenient though and it's a clean place to sleep.

After dumping our bags we hopped on the quaint old trams that run right through the city. First stop was to see Matsuyama-jo, the castle. Unlike many Japanese concrete reconstructions, this is still the traditional wood. In order to reach the castle without walking up the hill you have a choice of chair lift or cable car, both costing the same. We chose the former as it looked more exciting. These are just single plastic chairs suspended from a cable without any safety restraints. Fun, really, unless you are really terrified of heights. 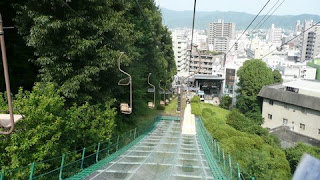 We've been up two of Japan's best castles in Himeji and Matsumoto, as well as the reconstructed castle at Osaka, but what stood out at Matsuyama was the detailed English histories throughout the building and the fantastic views over Matsumoto. 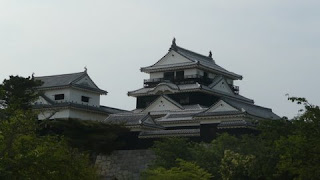 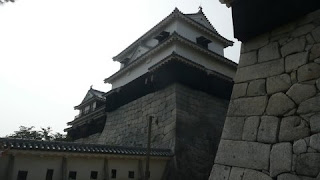 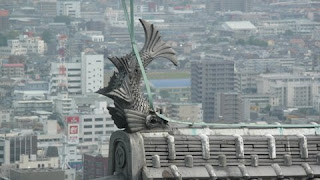 The castle looked especially fine in the late afternoon light. We walked back down the hill along a forested path with many steps. 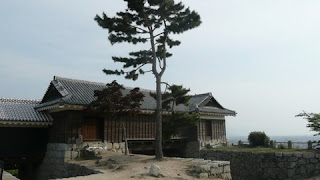 Hungry, we set off in search of Goshiki Somen, five coloured thin noodles that are the local speciality. The Lonely Planet said they could be found along the covered arcades, but we had no luck. Starving, we just picked a place and ordered without knowing what exactly it was we were choosing. Due to her condition, B couldn't eat the raw-hamburger like raw salmon and rawish egg on rice, so she had my cooked tuna mash on rice, but left me the curry udon. I don:t like sashimi, but I couldn't refuse this. It was okay, I guess. 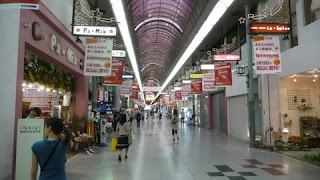 The last stop was also at the terminus of the tram line. The famous Dogo Onsen. Just across from the quaint tram station is a free hot spring foot bath. B already had her feet in when I was accosted by a highs school teacher wanting me to assist his students with their English by listening to them tell me about the sights in the area. Apparently I was only the second tourist they had found, but I was happy to help. We ended by posing for photos and exchanging business cards - finally, after 6 visits I have found a use for mine! 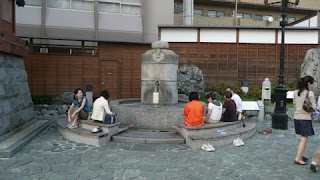 When I finally had a chance to put my feet in Toji, seated next to me, wanted to practice his English as well. His was much better than my Japanese, but it was fun nonetheless. Then the Botchan Clock started up, lifting up like a matsuri float to reveal a floating bath with cutely posed occupants. 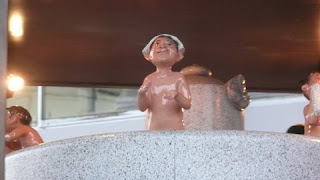 We walked up the arcade to the Dogo Onsen Bath House, made internationally famous by the Japanese animated movie, Spirited Away, whose bath house was modelled on the Dogo Onsen's. You aren't supposed to take hot baths when pregnant, so we decided to split up, with B heading back to the hotel and me taking a bath. 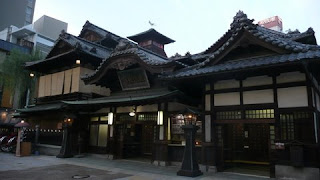 When I walked B back to the tram stop I finally caught sight of a Botchan Ressha, one of the time steam trams that run on the same tracks as the ordinary trams. They don't run on steam any longer, the black smoke is diesel exhaust now. Still, they are very cute. No chance for me to catch one as it was being stabled for the night. 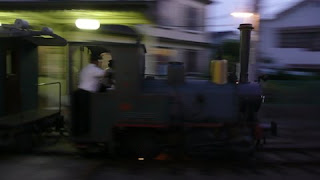 Truth be told, the bath wasn't all that fantastic. I paid 1500 Yen for the private room option. First take off the shoes and place them into the locker. Then go up to the third floor and enter my "private" room (actually you can look in from the outside, even see a bit of the street). I changed into the provided yukata (robe), stowing my belongings in the locked cupboard. Then down to the second floor to the Tama-no-yu (bath of the spirits). Take off the yukata in the change room and lock it away, then enter, modesty protected by a tiny towel into the bathroom itself. First, a thorough wash with the soap, shower and buckets of water, then finally sink into the hot bath, which is shared with other patrons.

In the end I couldn't detect that the spring waters were any different to a normal hot bath, unlike at Hanmer Springs in New Zealand. Somewhat more relaxed, I reversed the procedure, washing myself again, before returning to the private upstairs room. There I was given some green tea and a "botchan dango" (glutinous rice ball sweets) and left to relax for a little while. I suppose that if I wasn't alone then I might talk to my compatriots at this point, but I preferred to head off back to the hotel to see B. And that's what I did! 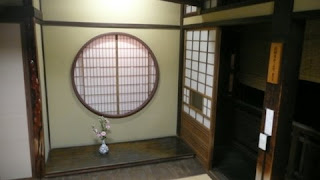 Now to work out where to go tomorrow. I'll post the photos up at a later date when I can use my own computer.