For once we were fully packed and ready to go when B's brother arrived to give us a lift to the airport. But when I opened the door I was hit by a hyper-excited bundle of brown and cream fluff. Michael had brought Kita (that's Japanese for North and Finnish for jaws) with him. We had taken Kita over to stay with Michael's two Cavalier King Charles spaniels the previous night , but it seemed like forever for our two-year old dog.

When Michael dropped us off at Sydney's International Terminal Kita was left staring at us bewildered and hurt that we were leaving him behind. It was heart-wrenching. Only a week poor pup.

After yesterday's sunshine the weather was now grey and drizzly. There was only a short queue at the Jetstar check-in counter; the staff were still preparing themselves for the morning rush. B's Malaysian passport took a long time to process. The check-in attendant was not aware that visas were recommended for Malaysians travelling to Japan. Fortunately, we were all prepared.

While B sat inside and tried to wake up I climbed the steps up to the observation deck and watched the busy operations of the airport unfold. Then it was breakfast at the food court. I purchased Subway for lunch to take onboard, but we decided that B was safest eating the hot airline meals.

Much of the airport's retail area is closed for building works and none of the remaining shops were of much interest. We were starting to feel excited about the trip as we passed through immigration. One of the things I like best about travel is that it's an opportunity for B and I to spend our time together away from all the demands of everyday life. 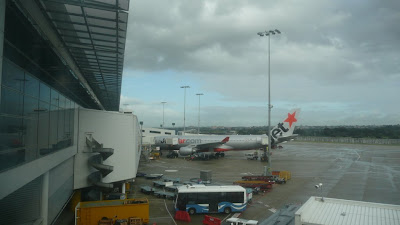 Our gate lounge, 54, was tucked away at the back of the airport with no view of the runways.It detracts a little from the experience, lessening the anticipation. Eventually we boarded. B claimed the window seat and for once I didn't fight her for it. The aircraft seemed fairly empty with plenty of free centre and aisle seats. There were quite a few young children. One of these was to delay our departure by 40 minutes. The family of a sick and screaming baby elected to remove themselves from the flight, and as a consequence their luggage had to be unloaded from the hold. I'm not complaining, perhaps we will be in that situation one-day.

The procedure completed, we backed away from the gate and taxied to the runway. The customer service delivered her welcome to the passengers at a breakneck speed. A safety demonstration, then we were ready for take-off. We raced towards the south, over Botany Bay, then turned northwest over the Royal National Park, which we could see through breaks in the cloud. 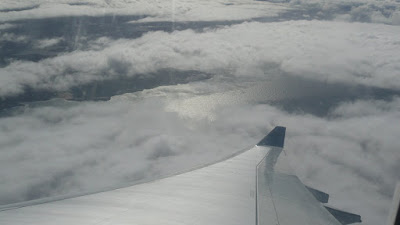 Once we were above the cloud layer the seatbelt sign was switched off and the first officer introduced himself over the PA. He warned that the meals service would be delayed by 20 minutes due to expected heavy turbulence. That's something I don't like to hear, but it was expected. I had checked the turbulence maps this morning and seen the band of rough sky between Sydney and Rockhampton. 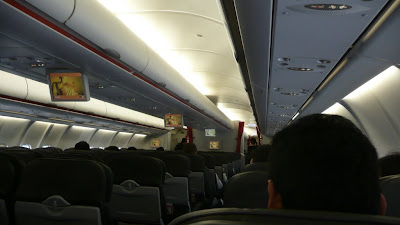 It was rough! A couple of times I could imagine a Monty Pythonesque hand of God reaching down to shake the aircraft. Incredibly, B slept through it all and commented that it was a smooth flight! Fortunately we were seated over the wing, which is definitely the best place to be for the turbulence sensitive like me. I still found most of the flight to be uncomfortably bumpy.

The crew did come through and hand out water. We were served water by Beer. That's what the Thai flight attendant's badge said. He claimed it was a nickname as his Mum drank a lot of beer while pregnant with him.

Apart from the frequent bumps as we passed through high cloud or between conflicting patches of weather the first few hours of the flight were quite dreary. We hadn't hired a video on demand unit and only had the cabin screens for entertainment. What we weren't aware of was that Jetstar have begun charging for earphones. If I had known I would have brought some from the pile I inherited on our last few flights. We decided to pay for a pair. 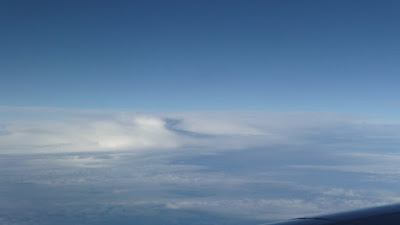 B watched the Steve Carrell movie "Dan in Real Life". What is it about Steve Carrell and Jetstar? I think we've watched something with him in it on each of our previous Jetstar international flights. That's not a positive, by the way!

We were excited to see the latest (and unseen by us) Doctor Who Christmas Special listed in the Jetstar magazine. Unfortunately, the schedule seems a little mixed up.

Once "Dan in Real Life" finished the map appeared on the screen and I was shocked to see that we were still over Papua New Guinea, that we hadn't even crossed the equator. It felt like a long flight.

So I continued listening to music on my MP3 player and chatting with B. Over Guam the plane started shaking with more vigour: it always does. Then, with the sun low in the sky the cloudscape opened up and the flight calmed down. Suddenly it just felt right. This was what flying was about: watching the clouds below turn pink and slate grey in an evening sky as we glide smoothly above. I ceased checking my watch and just enjoyed the scenery outside the window. 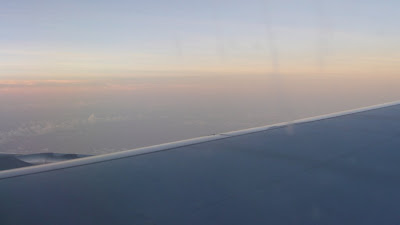 Eventually the slate grey sky turned black and there was nothing left to see. Still two more hours of flight and B grey restless. With half an hour to go we finally began our shaky descent into Kansai International Airport, built on a man-made island. Finally, touchdown!

We exited as quickly as possible, though there is a new delay as foreign visiters need to have their fingerprints and photograph captured at the immigration desk. It really slowed the long queue down in comparison with our previous visits.

When at last we had exited with our baggage we quickly checked the tourist brochure stand, then made our way to the train station. It was another ride in the Darth Vader train, the Nankai Rapi:t. Leopard trip seats, a cathedral like ceiling, oval windows and the space helmet front, the Nankai Rapi:t is, without doubt, the weirdest train on the rails. 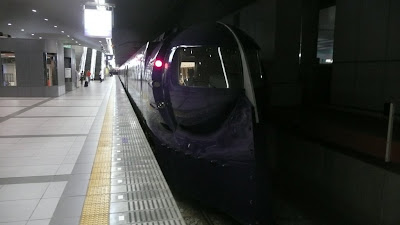 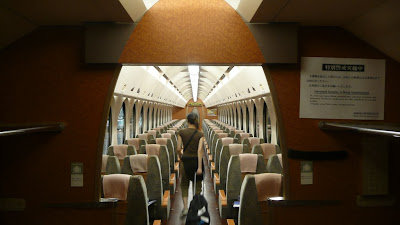 Under an hour later we were walking on automatic to the Cross Hotel in Shinsaibashi. Quickly checked in, then walked out again to find some dinner. It was past 10pm now and most shops were shut, or about to. We ended up eating udon at the same place as last time. Satisfying! Then a quick stop to a convenience store for some fruits in jelly, as we couldn't see any other place selling fruit. 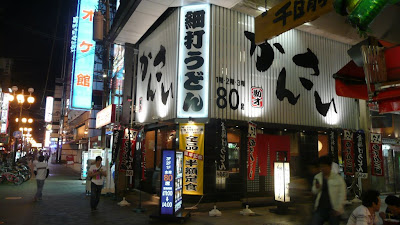 Finally, back to the hotel room and it's wonderful bathroom, pouring bowls of hot water over our heads as we sat on the little plastic stool. It's good to be back in Osaka, but it was a long tiring flight to get here.