You go, me go, Tsumago

June 11, 2008
Poor B, she doesn't have the same levels of energy anymore and with pregnancy we've had to slow down and make certain we have meal breaks at the appropriate times. It doesn't mean we can't still have fun.

Today we caught the Shinano Express to Nakatsugawa, a journey of less than an hour. The intention was to catch the bus to Magome and then decide whether to walk or bus it to Tsumago. Magome and Tsumago are historically preserved checkpoint towns in the Kiso Valley along an alternate route between Kyoto and Edo (now Tokyo).

The train runs up into the Central Japan Alps, along river valleys carved between the mountains. It is spectacular scenery, reminscent at times of the European Alpine regions. However, instead of meadows, available flat areas are devoted to rice paddies and vegetable farming. 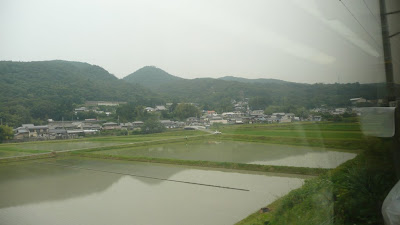 Upon reaching Nakatsugawa B decided that she couldn't face a half-hour bus ride to Magome and certainly was not able to travel between there and Tsumago. The alternative was to keep going onwards to Nakiso, the nearest train station to Tsumago, but we were out of the train by now and had missed any early connections. So we wasted some time by wandering around Nakatsugawa, B trying one of the local chestnut sweets. 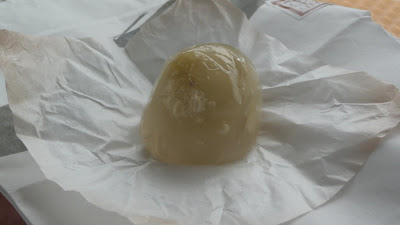 Nakiso is quite close by train. It's perched scenically over a bend of the rocky Kiso river, the valley floor littered with huge grey boulders. There was no bus to Tsumago for a while, so we hired our first ever Japanese taxi to take us there. It cost 1350 Yen, about double the bus fare for two, so it wasn't bad value. 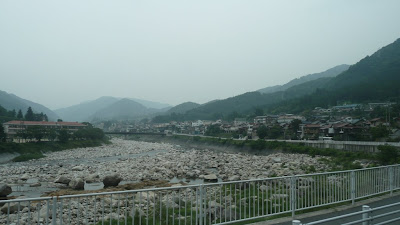 The drive took us past a stone monument workshop. Amongst the usual religious statues was a giant frog with breasts as well as a couple of gravestones for chihuahuas (the were picture on their fronts).

Despite the many tour coaches Tsumago was absolutely gorgeous. The town is nestled inbetween high mountains heavily forested with the cypress pines that played such a large role in the valley's history. Imperial decrees protected the pines, with heavy penalties for unauthorised logging of this valuable source for of building materials for royal residences and shrines. 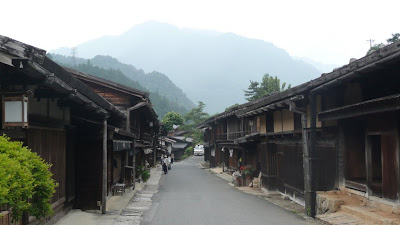 Edo style wooden buildings line a road open only for pedestrian traffic. The sound of running water fills the air, with streams running alongside and across the paths, filling wooden troughs and stone basins. 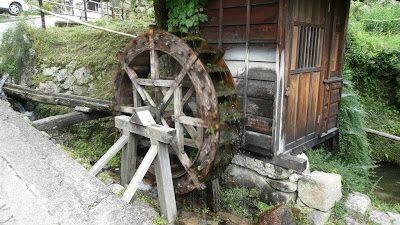 There are two museums that are well worth a visit. The Tsumago-juku Honjin was a rest house for nobles. Walking around the quiet tatami-matted wooden house is very pleasant, though there is a lack of English signage. You are handed a printed explanation with your ticket, however. 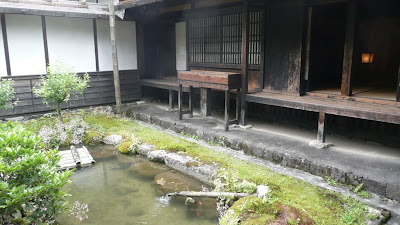 The Waki Honjin Okuya was another rest house for high nobles, including the emperor. Tour guides are on hand to explain. The gardens are gorgeous. Take the time to sit on the tatami floor and contemplate their beauty. The historical museum at the rear of the house features an extensive history of the area, starting with the stone age Jomon people. The English signage is excellent and there are guides on hand to talk about the house's interior. 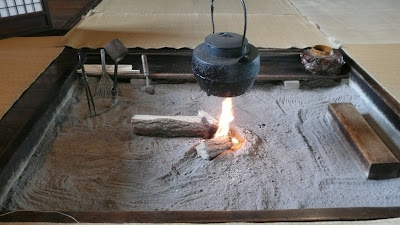 Inside the Waki Honjin Okuya we were handed a piece of rough surfaced cypress pine. The guide then told us that this was the state of the timber in a newly constructed house. It was then smoothed and darkened by the rubbing of clothes washing over the surface and by the action of the smoke from the irori, the open fireplace in the centre of the house.

I would love to walk the full path between Magone and Tsumago one day and to spend at least one night in a Tsumago ryokan. The town has a quiet, restful beauty that should be even better once the tour coaches have departed.

For now, we were day tourists and it was time to return to our hotel in Nagoya. We waited for the infrequent bus back to Nagiso, but once there only had a short delay before a convenient express train back to Nagoya.

As we entered the environs of Nagoya I spotted the Hotel 0 degrees C, followed by an appartment block named Incubator! I guess the locals like it a bit hotter than the visitors.

After our arrival at Nagoya we wandered through some of the shops nearby the station, including the ever wonderful Tokyu Hands, purveyors of various gadgets, crafts, furniture and everything else for the home and office. Dinner was local kishimen noodles, flat rice noodles. Nice, but after soba noodles for lunch we ended up feeling a little noodled out. 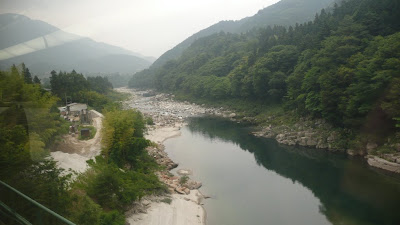 One the subject of food, in our opinion the Okayama peaches were nice, easy to cut but flavour-wise not worth A$9 each. The Gokuri mango juice was also good, but not up to their grapefruit standards. 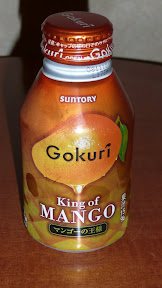 Artus Silenis said…
HI! I have discovered your blog preparing my tryp to Japan! It is amazing!! I love it!