June 06, 2008
Right now my Mother is somewhere in Europe on her very first trip overseas. Tomorrow B's Mum will fly off to China on a tour of that country's portion of the Silk Road. And on Sunday... we are off to Japan again.

I guess it demonstrates that international travel is possible after children! Actually, I never doubted that it was possible. But things will change with the addition of a new member to our household, that is certain.

As the high pressure system hovered over Australia, keeping the skies clear and blue, I was feeling the pressure of work and life. I stared up into those skies and dreamed of escape. I built a miniature Japan in my study in the form of a model railway. But I wanted the real thing. The Jetstar birthday sales arrived and I struggled to resist. B, in the early weeks of pregnancy, didn't want to travel, afraid, though there is little risk, of losing that which we had tried so long for.

It just felt like the right time to travel, to fly off into those stable, clear skies and follow the aircraft I watched on my daily walks. I was tempted to go off to Japan by myself for a week, to give myself time to think about life in a land whose people value simplicity and elegance, clarity in form. Late one afternoon, my mind filled with conflict, unable to focus, I stopped at Sydney's International Terminal to watch the planes take-off, to see others embark on adventures. There, for the first time, I saw the Singapore Airlines A380 lift ponderously into the pale and dusty western skies. 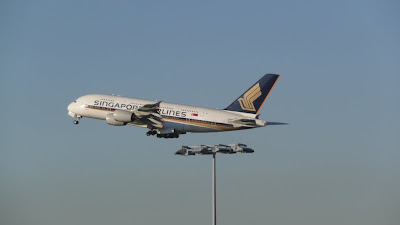 I could imagine myself ensconced inside the aircraft, watching the golden evening light fade away across the red Australian landscape, escaping to another part of the world. Imagined myself buying a ticket right there, though I had nothing but the contents of my work daypack with me. Imagined trying to buy enough supplies from the airport shops to keep me going in a country whether most clothes are too small. It would be fun.

Not as much fun as travelling with B. So I quelled by desires and went home. The next week we had our first sight (by sound!) of a seemingly healthy fetus. It was exciting and wonderful to be able to share our joy with the rest of the world. The riskiest time was over, for the next few months at least, and now we could relax a bit more.

We had planned to go down to Melbourne for a short break. The Jetstar international birthday sale had ended, prices were back to normal. I caught the train to work as normal, but happened to glance across to someone reading a newspaper. Down at the bottom of the page was an advert for a Jetstar sale. I resolved to check it out at work.

Jetstar on sale to Osaka. For trips beginning a week later until sometime in July! I called up B, she asked her boss. A credit card payment later and we were booked for a week's holiday in Japan.

An aside now. Why so excited about Jetstar? I'm not really. I would much rather fly a full service airline again. It's just that their prices are cheap enough and they are one of three airlines in Australia that fly direct to Japan. I still hope we can have a "full service" adventure to Europe when our child is a few months old and B is on maternity leave. But that is in the future.

This will be our sixth trip to Japan, but already I can find more things to see and do than we have time for. I want to visit Matsuyama and see Dogo Onsen, upon which Spirited Away's bathhouse is modelled on. It was watching Spirited Away again that triggered the desperate urge to visit Japan again. There is also the Kiso Valley. When we went to visit the travel agent to purchase our Japan Rail passes there was a big poster of Tsumago, a historically preserved town in the Valley, behind him. It looks so wonderful! So many sights to see!

Now, I always seem to get sick before visiting Japan and guess what happened today? I was off sick. Damnit! But it did mean that I could spend time with Kita, our dog, before he has to have his own vacation at the relatives. I'm always sad to leave him behind. And the sky finally cleared late in the afternoon after a week of rain, so I could see the aircraft fly overhead and put myself into the delicious travel mood of the weeks before. We are off to Japan! 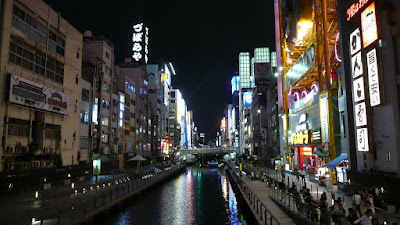