June 11, 2008
As I begin writing this we are speeding across Japan at hundreds of kilometres per hour not knowing where we will stay tonight. Our Series 700 'Hikari' Shinkansen will deliver us to Nagoya, but we have not booked any accommodation. 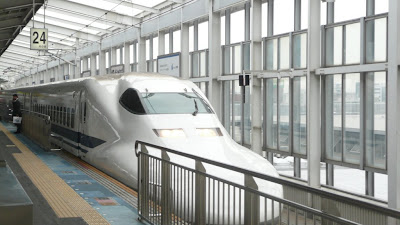 Outside the window the sun is a mere patch of glowing yellow in a hazy grey sky. The land alternates between rice paddies and the grey tiled roofs and concrete of suburbia. But if you look carefully there are always tiny patches of beauty that stand out amongst the samness o the landscape. A temple, somebody's ornately manicured garden, a narrow path between a bunch of old wooden houses. It takes a little while to see the real beauty of Japan. A cursory glance will only lead to disappointment. 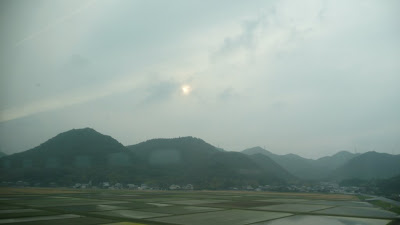 I happen to glance at the walls of this Shinkansen and notice, for the first time, that the plastic walls appear to be made of handcrafted washi paper.

The day began a little late, but sleeping in felt so good. We had to wait at Matsuyama Station for our train, so we ate a western breakfast at a small station cafe. I say western in that there was toast, eggs, bacon croissants and the like, but we ate it with chopsticks and were served small bowls of spaghetti in tomato sauce.

Everywhere on the main island seemed quite far from Matsuyama (Pine Mountain), so rather than waste a day we decided to make a detour via Takamatsu. Thankfully, the two and half hour journey was rather more comfortable than the previous day's. Despite the modern exterior the carriage had a wood theme going on inside. We had wonderful views across the calm Inland Sea, though the islands were rather obscured by haze. It's a pretty journey between the mountains and the sea, past rice paddies and through bamboo valleys. 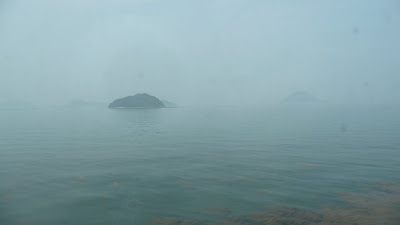 After our arrival at Takamatsu (Tall Pine) we dumped our luggage in a coin locker and obtained maps and train timetable information from the tourist office. With some time to waste we explored a nearby supermarket, marvelling over the range of goods.

A local JR train running on a single track took us two stations to Ritsurinkoen-Kitaguchi (Ritsurin Garden North Gate). The garden is Takamatsu's main attraction. We've visited two of Japan's Top Three Gardens and in my opinion Ritsurin should be displacing Okayama's Koraku garden in that list. 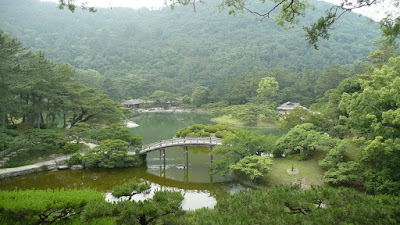 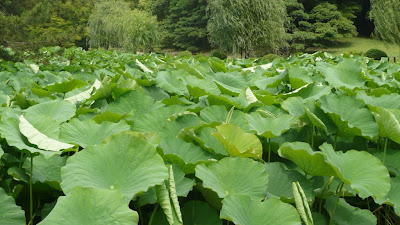 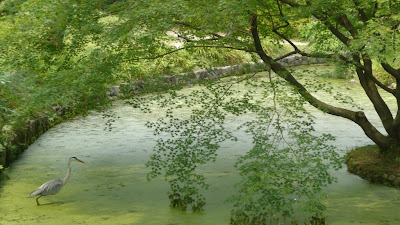 As Takamatsu was only a stopover for us we followed the supplied map's red "one hour" path, but it is worth making a few little detours now and then. One such detour is to see the Okedoi-no-tai waterfall. Apparently it was once generated by pouring buckets of water down the cliff whenever the local lord walked past. Now it seems to run constantly. 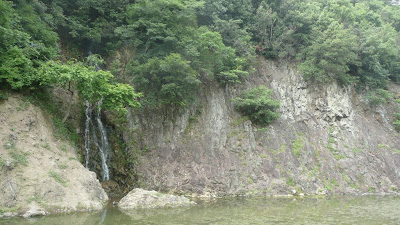 Nearby is the Kikugetsu-tei teahouse. We stopped there, removed our shoes and ordered a bowl of matcha (stirred powdered green tea) and sweet. The shoji screens were opened on three sides of our room, allowing the gentle breeze to flow through as we sat on the straw tatami mats. In front of us was a gorgeous view of the Kansui-chi pond with the waterfall in the background, a gentle sound the only noise. It was wonderfully relaxing and if somebody had layed down a couple of futons it is likely that we would have fallen asleep there in the afternoon warmth. 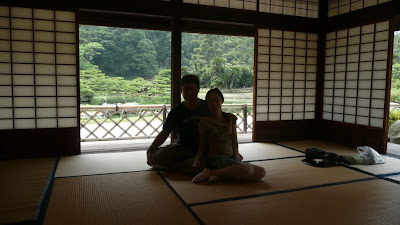 Unfortunately, our time was limited. We returned to Takamatsu's main station and had a late lunch of tonkatsu before boarding our train to Okayama. Across the massive Seto-Ohashi bridge, admiring the islands to the South in the late afternoon haze. It was a classic Asian scene. 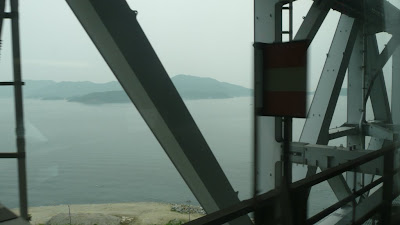 After a total of six visits to Okayama station we finally bit the bullet and purchased some fresh peaches from one of the souvenier shops. They cost 1800 Yen (A$18), making them the most expensive fruits we have ever bought. We'll see how they taste tomorrow.

From Okayama it was a Shinkansen ride to Nagoya. I thought of just wandering around until we came across a suitable looking hotel, but B's eyes lit up when she saw the shopping and eating opportunities in Nagoya's station plaza. The Associa Hotel (not the Marriot Associa!) has discounts for JR Pass holders and is located within the station building. They had a vacancy, so we took a room. They also have free wireless internet access - yay!

Unfortunately for B the shops were closing by this time, but in a kind of appropriate way considering our first meal of the day, we had a late dinner of Japanese style pizza (Nagoya chicken and leek with soy sauce) and pasta before returning to our small, but comfortable hotel room.

Those of you who remember my earlier trips to Japan will know of my obsession with Gokuri Juice: the Miracle of Grapefruit. No luck finding it this time, although I did see competing grapefruit juices. However, at a little supermarket outside of the station, one which sold Tim Tams, I discovered Gokuri: King of Mango! Which will win 1800 Yen peaches or Gokuri Mango? Stay tuned for tomorrow's edition!