Beefing it up in Takayama

Not all beauty in Japan is on a miniature scale. The train ride between Nagoya and Takayama is incredibly scenic, running along deep river gorges of boulders and jagged rocks on the way up into the mountains. There was an English/Japanese brochure detailing the region’s many sights in the train's seat back pocket and the sights were also announced over the PA system. 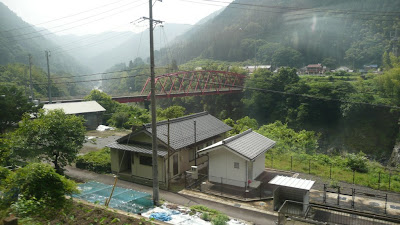 Initially we followed the Kiso River, the same as we visited yesterday. The Kiso was joined by the Hida River and it was this that we followed into central Japan. At times the river rages through narrow gorges, but the Japanese have tamed most of their rivers to provide hydroelectric power, so other sections were placid blue-green lakes bound by dams. Great pipelines ran down sides of mountains, through the generator turbines and back into the river. Steel red and pale blue bridges criss-crossed the valleys to allow traffic and trains to pass between the towns that lined the riverbanks. Tiny tea and rice plantations clung to the edges besides the train tracks, while the number of sawmills hinted at the major industry of the area. 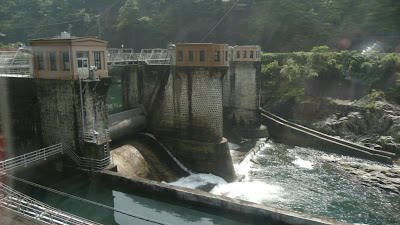 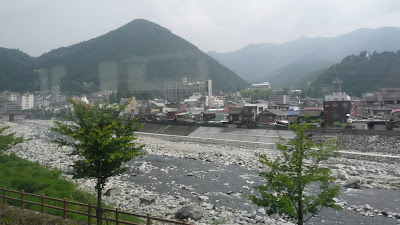 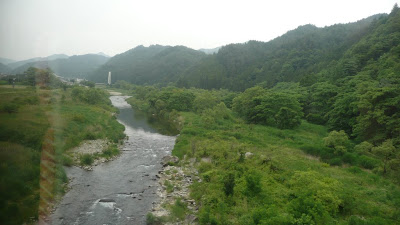 The previous time we visited Takayama was during its famous Spring festival, when giant wooden floats were paraded through the streets. Takayama was a lot quieter today, though there were still many tourists. We had fallen in love with the historic streets with their traditional wooden architecture and the many shops selling woodwork, furniture, pottery, rice crackers and other souvenirs. Most of all we loved the Hida beef, so tender and full of flavour. 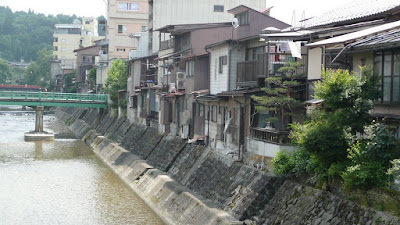 After dropping our bags off at the hotel the first thing we did was go to a restaurant and order premium Hida beef shabu-shabu, thin slices of meat and vegetables you boil in broth yourself using a cooker at the centre of your table, then dipped into either a citrus or sesame sauce before eating. It’s an expensive dish, but it tastes divine. 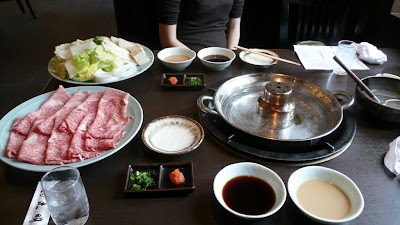 We then spent the remainder of the afternoon wandering around the historic areas of Takayama, stopping by shops to purchase fine crafts as souvenirs. The lacquer and wood work is amazing, but usually has prices to match. We did pick up some really cheap, but interesting, pottery, along with a few other odds and ends. One of these was a sarubobo, a faceless doll that is supposed to bring you luck. I’m after an orange sarubobo, which is supposed to bring luck in travel! 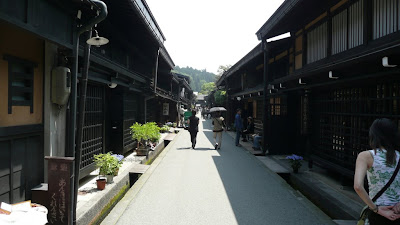 The amazing thing about both Tsumago and Takayama was that wherever you walked you could hear the sound of running water. The water flowed through the drain channels at the edge of the roads, presumably coming from the rivers that flow through Takayama. It's such a beautiful but strange sound for someone coming from a country seemingly in perpetual drought, where running water generally means that it's raining or that water is being wasted. 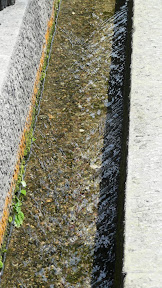 When the time came to replenish our energy we stopped by a small store to order takeaway skewers of Hida beef. Then dinner was a crumbed cutlet of Hida beef with salad for B, while I had hoba miso with thin strips of Hida beef. Hoba miso is a local miso with vegetables cooked in a magnolia leaf over a small charcoal burner at your table. We sat cross legged at the low tables on the tatami mat section of the restaurant, the Bandai. 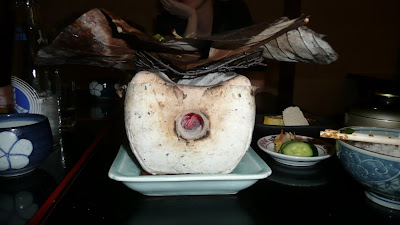 Our room at the Hana hotel is also Japanese style, with a tatami mat floor and rolled out futons for beds. We had the choice of a Western style room, but it's more fun to sleep like this, with the scent of straw permeating the room. The staff are very friendly here and there is free internet (wired LAN) in the lobby. 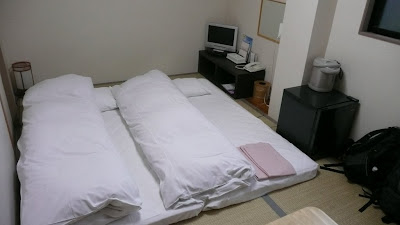 There is so much to do in and around Takayama. And more Hida beef to be eaten!