June 15, 2008
Just watching BBC World News as live scorpions are being deep fried in a Beijing market. Now it's pork in steamed egg in a Chinese take-away. Brings back memories, but I know which country I prefer right now as a tourist. Yes, it's Japan. And I don't want to leave.

[How do you eat duck heads? You open up the mouth and suck out the brains.]

Still on the subject of news, we woke up this morning to see a 7.0 magnitude earthquake in Iwate province flashed all over the Japanese news. Down here in Osaka we didn't feel a thing, but the pictures of roads demolished by landslides are quite astounding. Unfortunately they are currently listing 6 people dead and about 100 injured. Scary.

The earthquake replaced the other big news which has dominated the television news since we arrived: the Akihabara knife-wielding murderer.

Fortunately, there was nothing so dramatic to report about our adventures today. All we did was shop. And shop. And Eat. And shop. From the shops along the Shinsaibashi covered arcade we caught the train up to Umeda. There we waited in a long queue to dine at an Okonomiyaki restaurant. 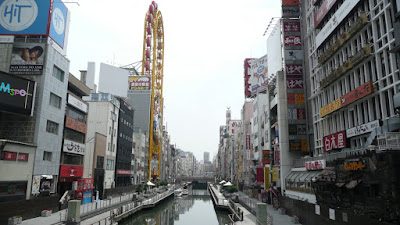 Okonomiyaki is a patty shredded cabbage, meat and egg cooked in front of you. [Yaks' penis. He split it in half. It just moved. I'm not trying. No way! Back to Okonomiyaki] It's then covered with mayonnaise and a sweet teriyaki sauce. It's a local speciality of Osaka and it's good! 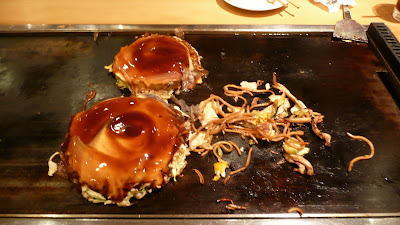 Back to Shinsaibashi station. More clothes, and the wonderful Tokyu Hands. We were in search of dog-related items, specifically a pooper-scooper. Surely, the Japanese would have a really cool version.

All we found was a scoop designed to be held at the dog's rear while it is doing the business. Right. Don't think that's going to work on Kita. 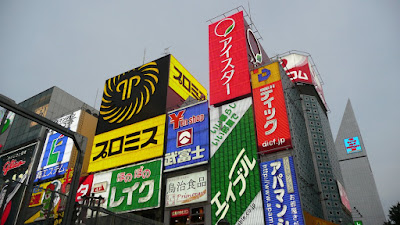 After dinner, we dropped off our heavy load at the hotel, then walked down to Den-Den town. Most of the shops were closing at 8pm. We made it to Joshin Super Kids "toy shop" (Super Kids must be a euphamism for big boys, like me). Unfortunately, they had run out of some of the model railway parts I need. I did pass a closed model railway shop on the way, so I'll give it a go tomorrow.