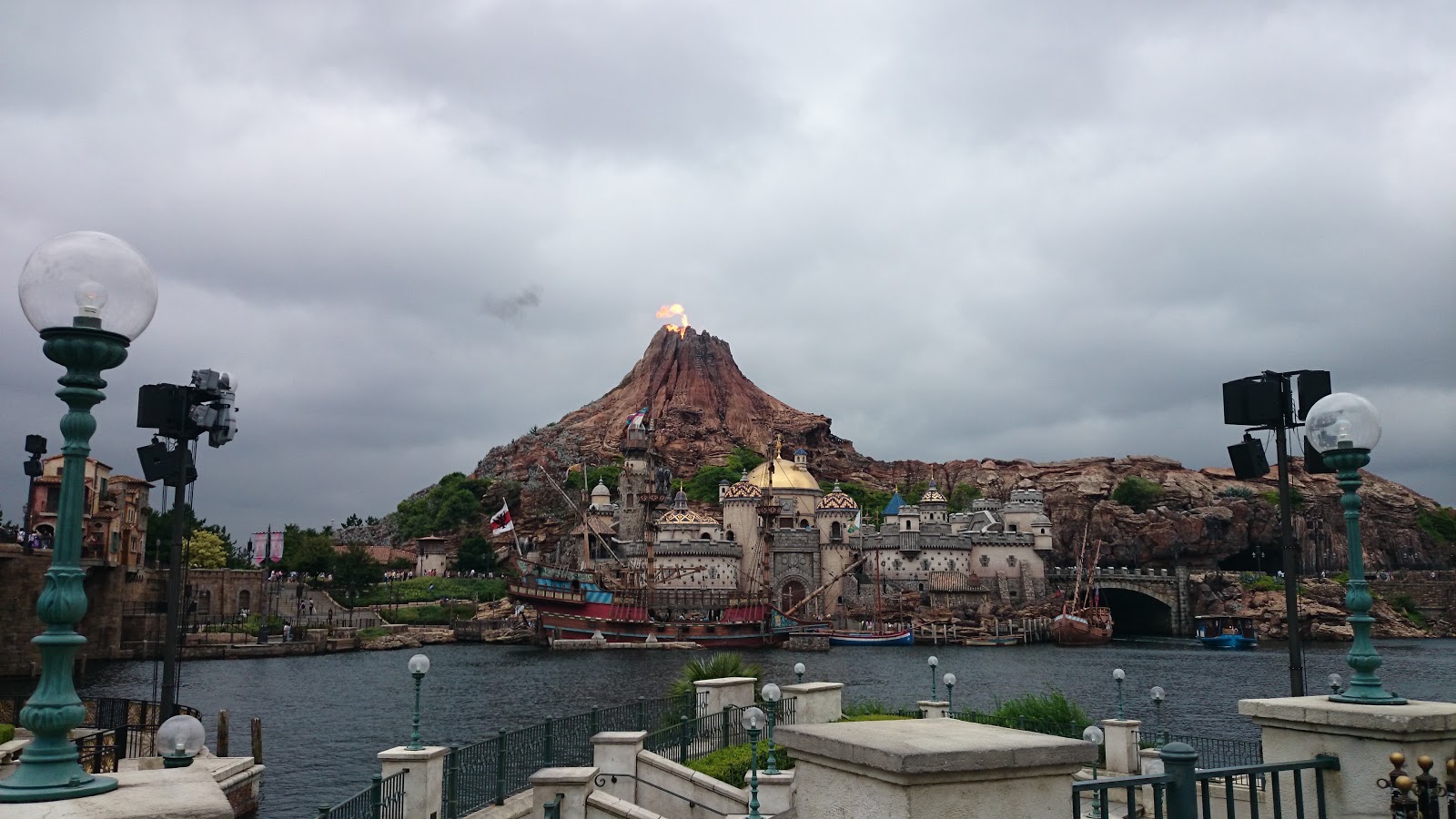 I was never a great fan of Disney as a kid, but I'm beginning to understand its attractions. Last year we visited our first Disney theme park; Tokyo Disneyland and thoroughly enjoyed it, despite the long queues for a number of major attractions.

To reach the park from Shinjuku involves a 15 minute train ride on the frequent Chuo Line Rapid to Tokyo Station, then a long walk to the Keiyo Line to Maihama. This time we caught the Mickey Mouse windowed Disney Resort Line monorail to the DisneySea park entrance. Alex was delighted to finally use automatic gate tickets at the monorail station (you can also use IC cards) rather than the attendant gated JR Passes we have been relying on. 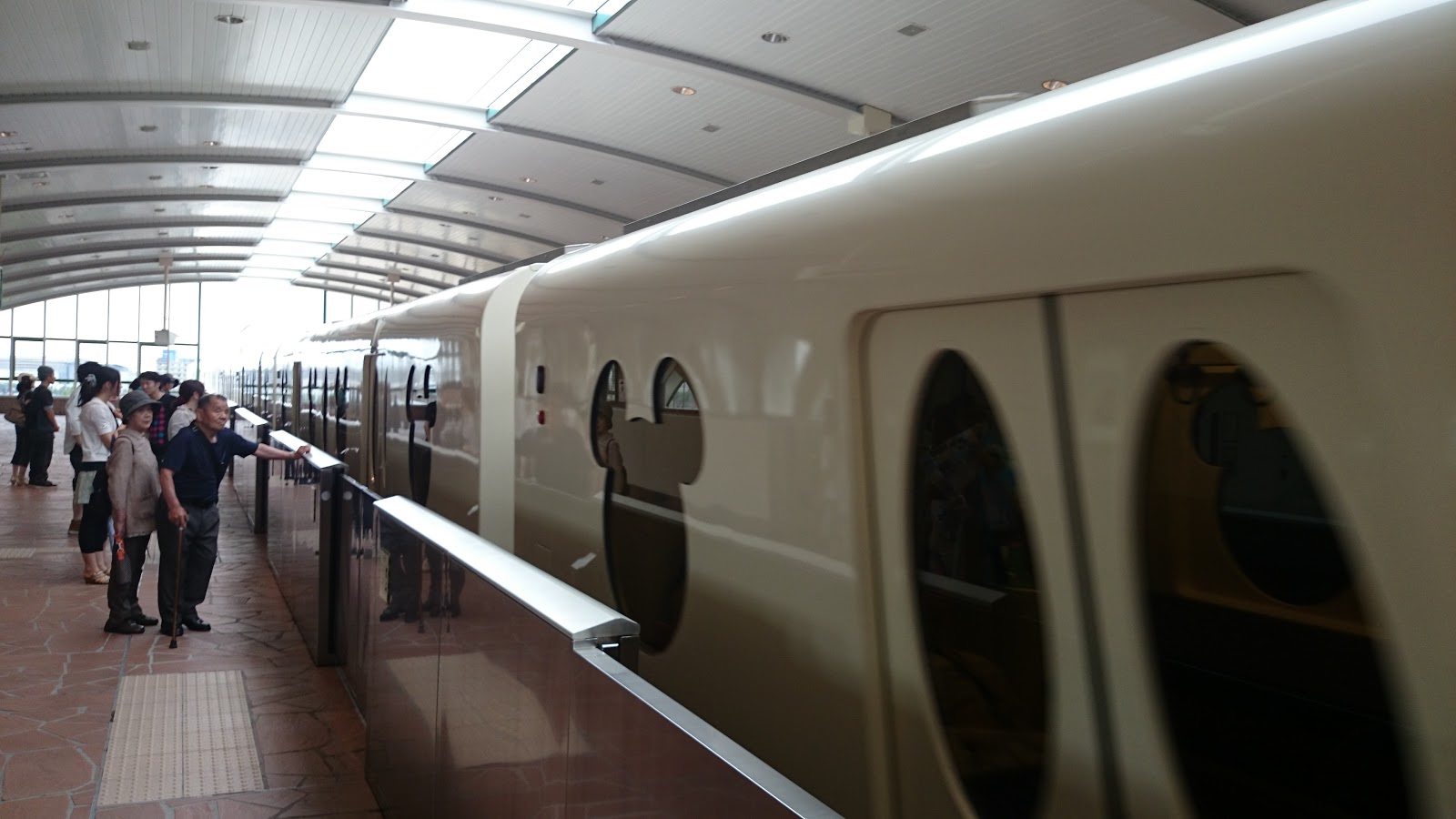 Once through the ticket gates a large globe, appearing to be suspended by water, spins slowly. The gateway to the park is through the Mediterranean Harbour district, a grand pseudo Venice which looks really impressive, though not as genuinely decayed as the original. 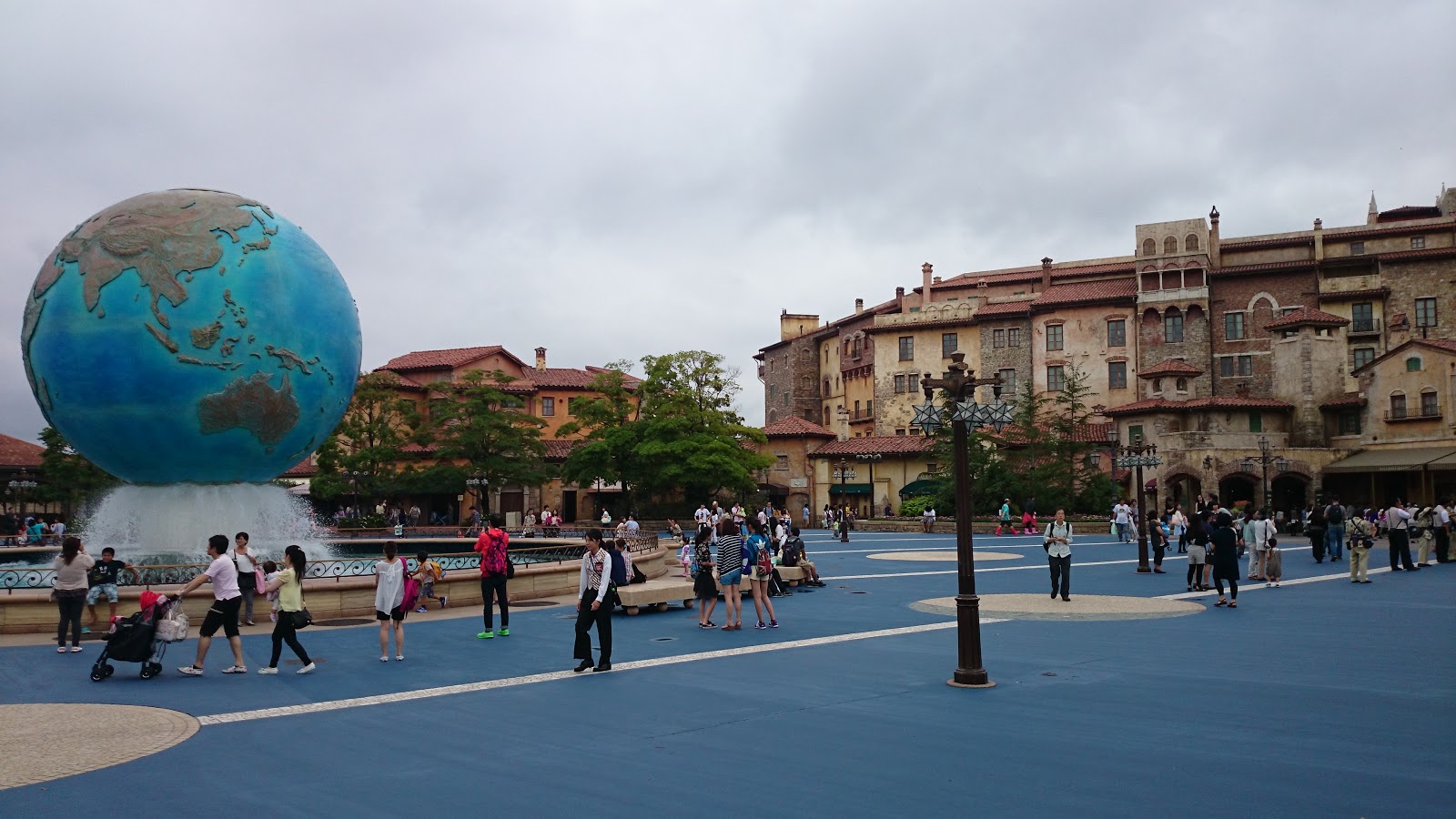 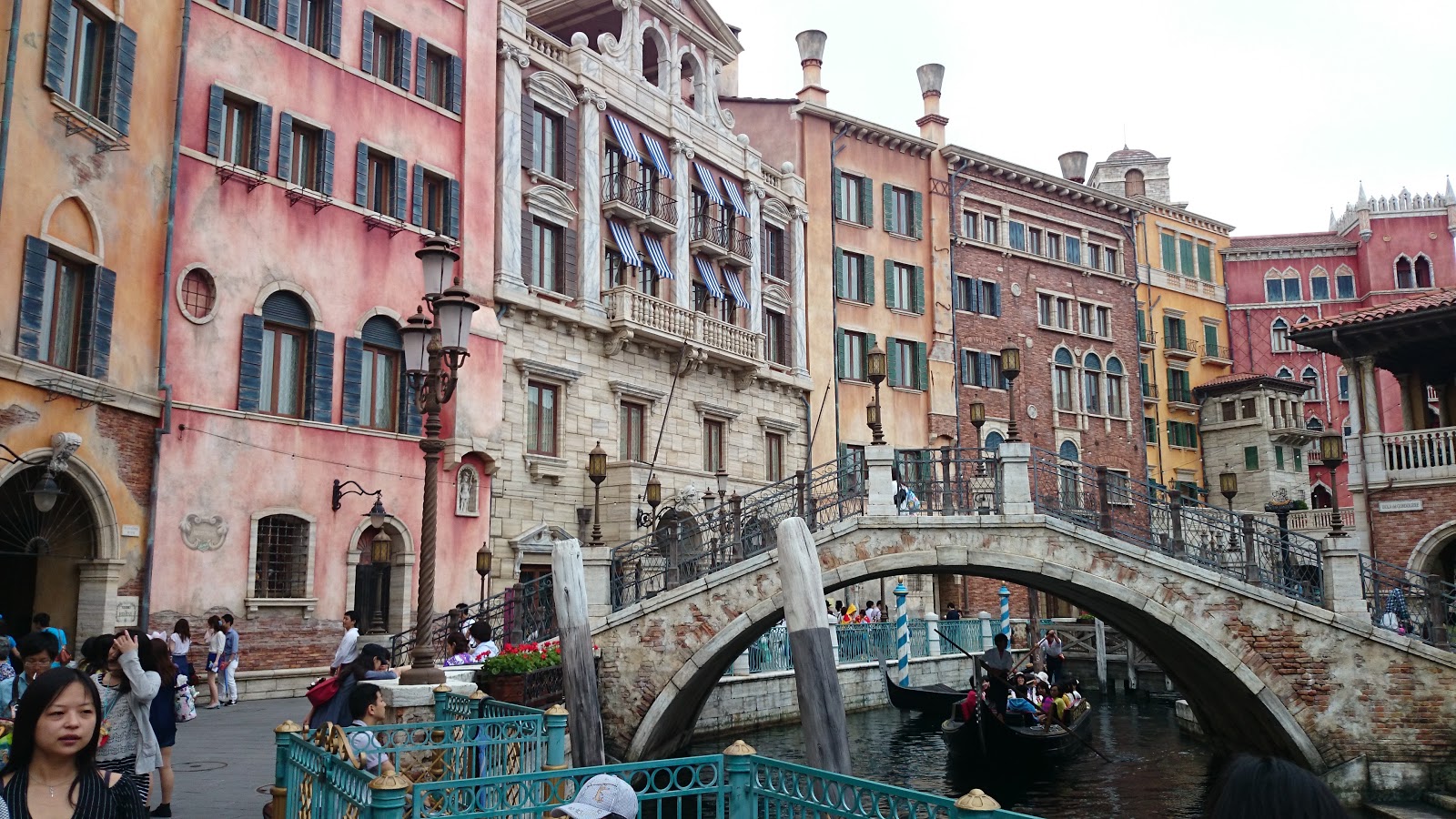 The whole park was grand in scale. A huge "hotel" dominates the American Waterfront, the Tower of Terror, with a lift inside that suddenly plunges down. Or at least, that's what B and Alex tell me, such a ride is one of my worst nightmares. Adjacent to this looms the full scale liner SS Columbia, housing restaurants. An elevated old American style elevated railway delivered us up to the Lost River Delta with it's "Inca ruins". Unfortunately Alex was slightly too short for the Indiana Jones ride (phew). 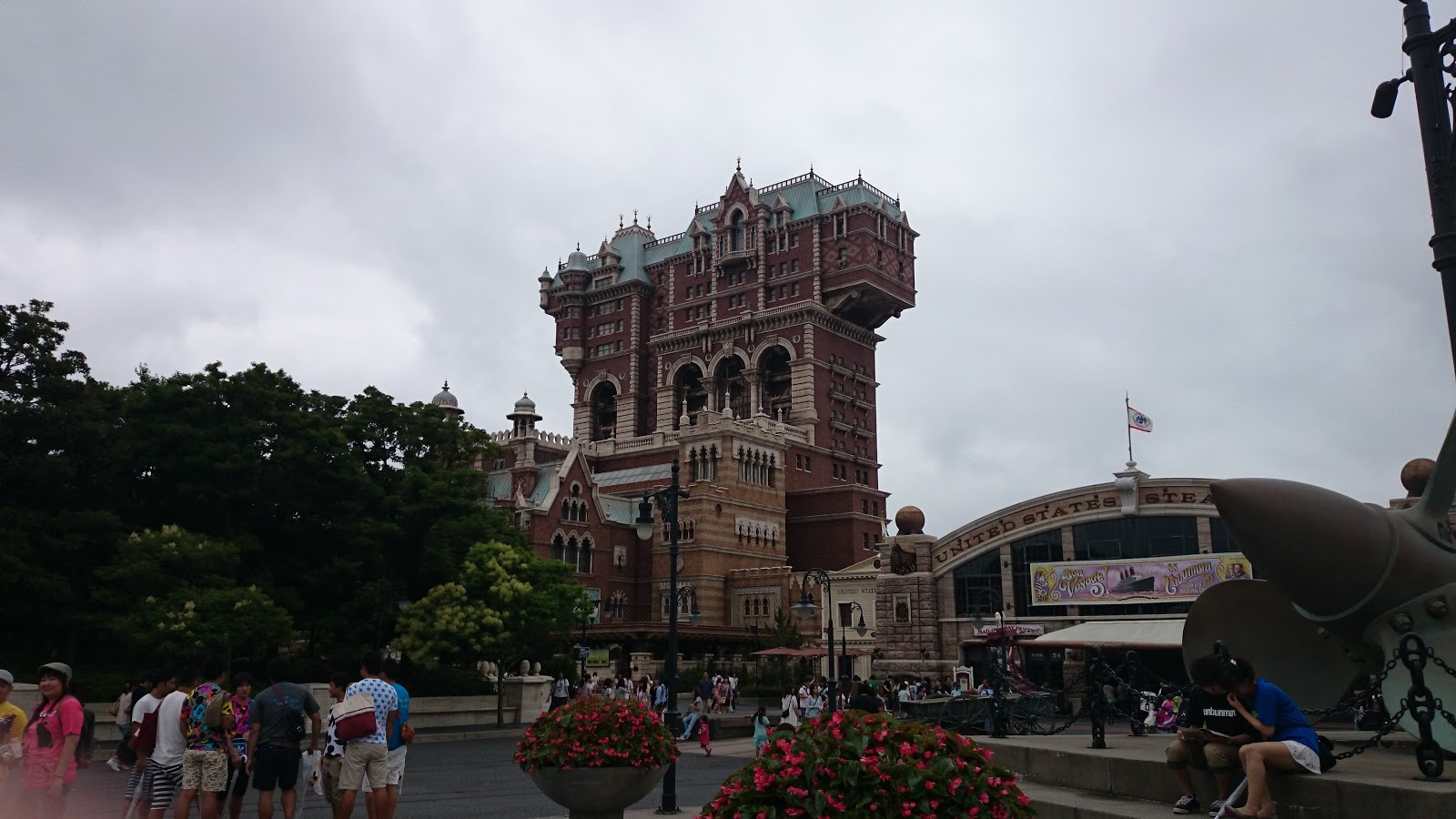 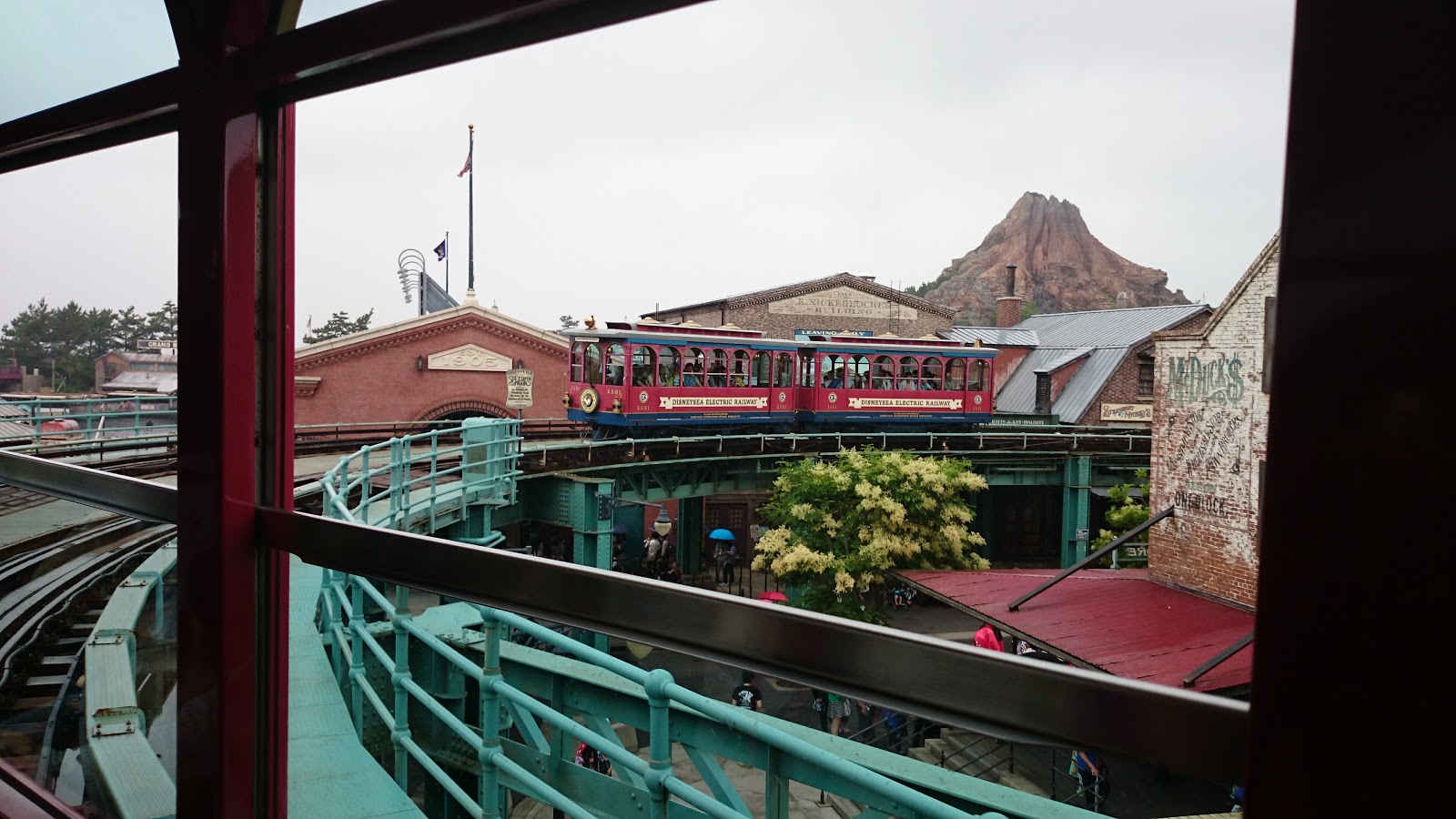 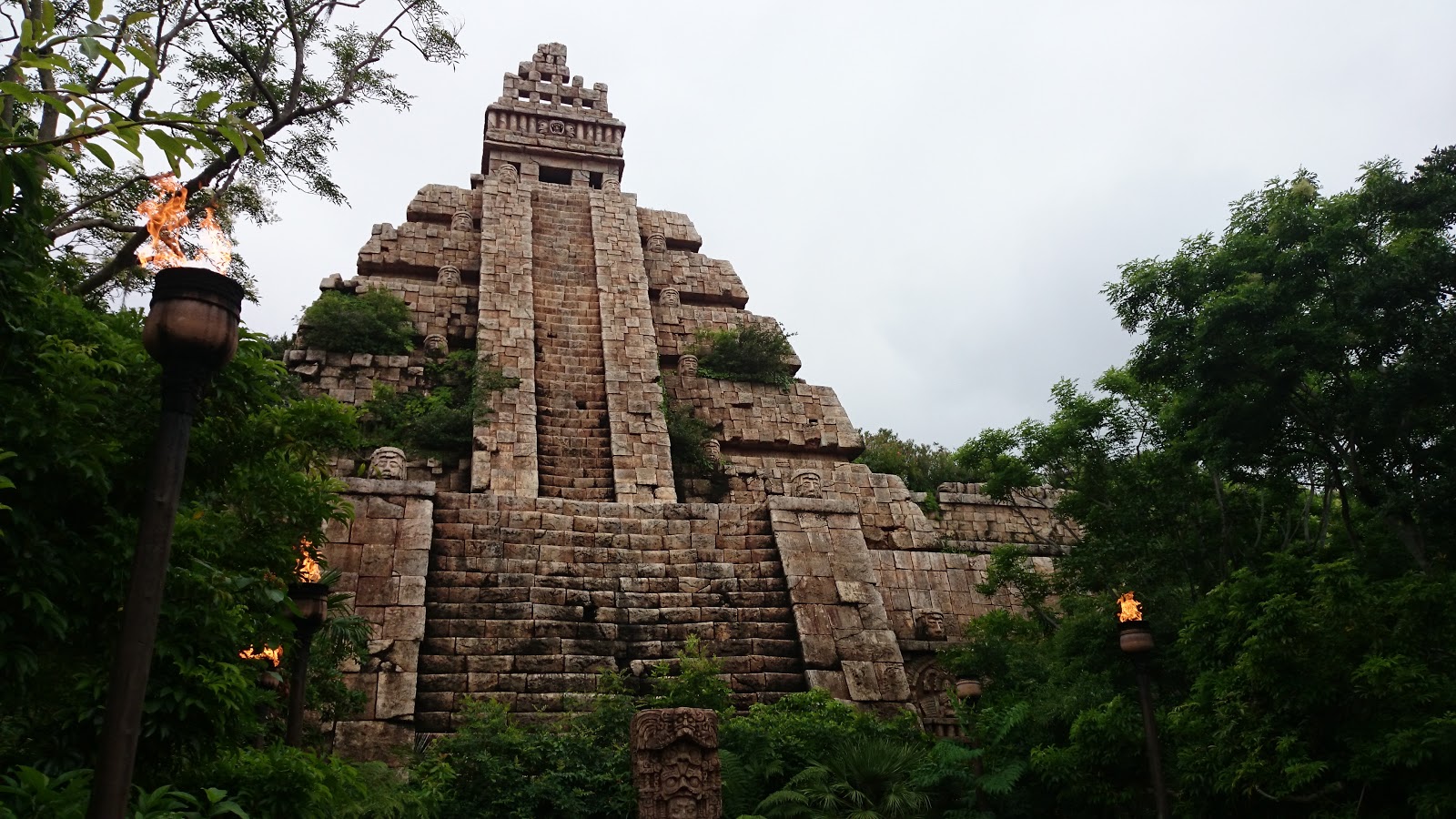 We chanced into the Mystic Rhythms show which featured an amazing dance and live music act set in a jungle with costumed performers. Well worth seeing. 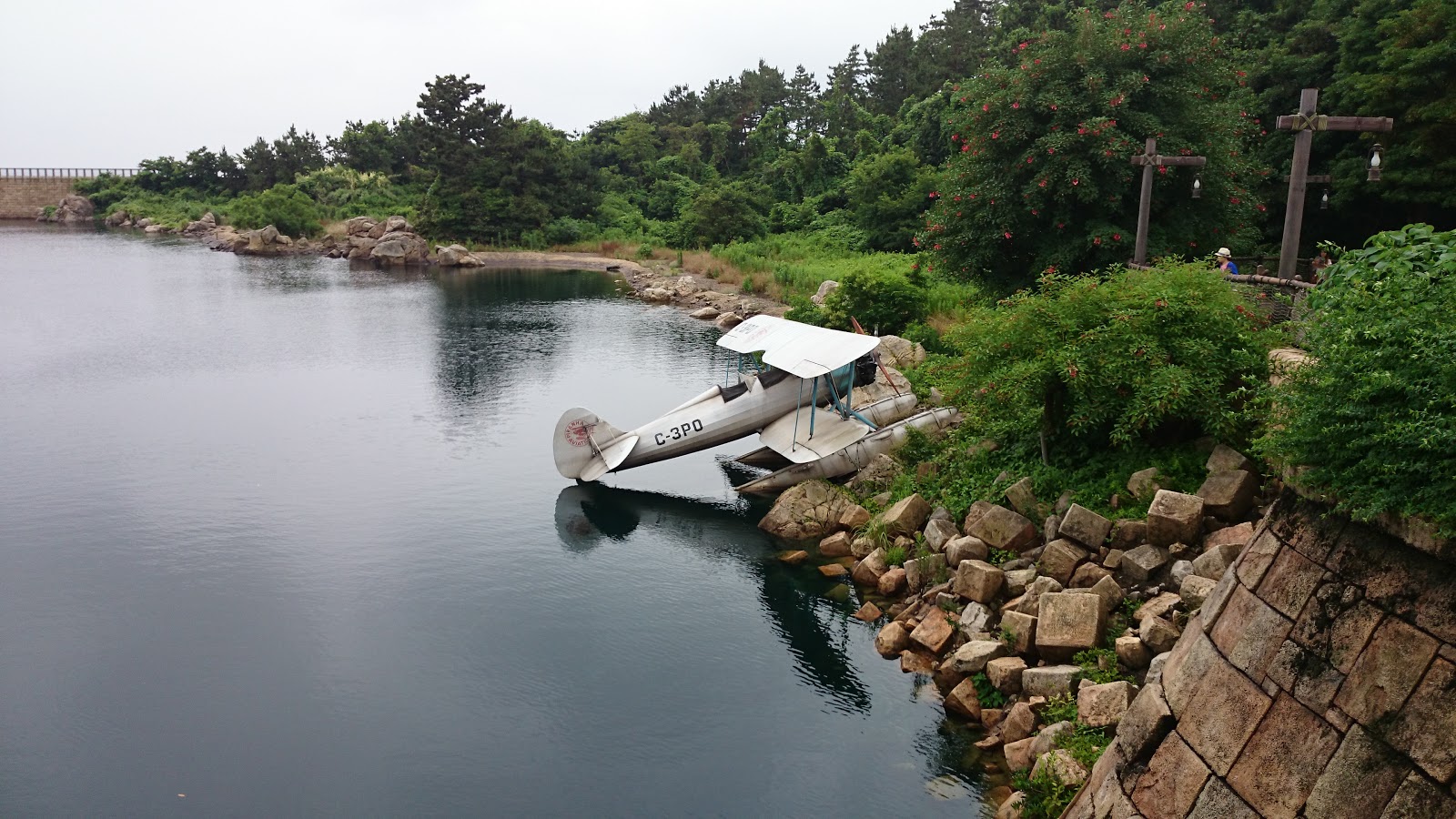 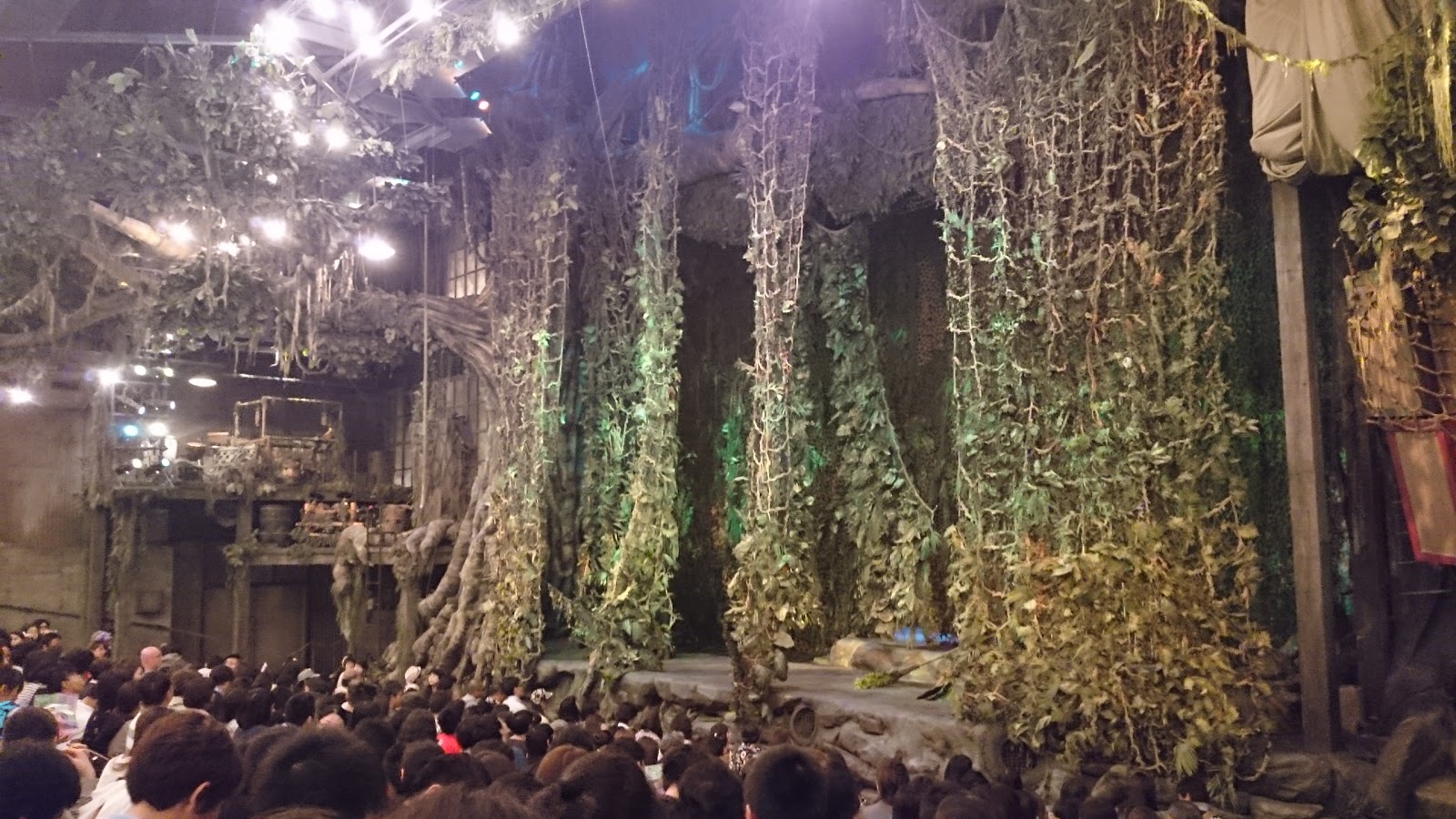 Then it was off to the Port Discovery area for the Aquatopia ride.

From the outside Aquatopia appears to be a dodgem boat ride on hovercraft, but these automated vehicles actually follow underwater paths, suddenly spinning and reversing. 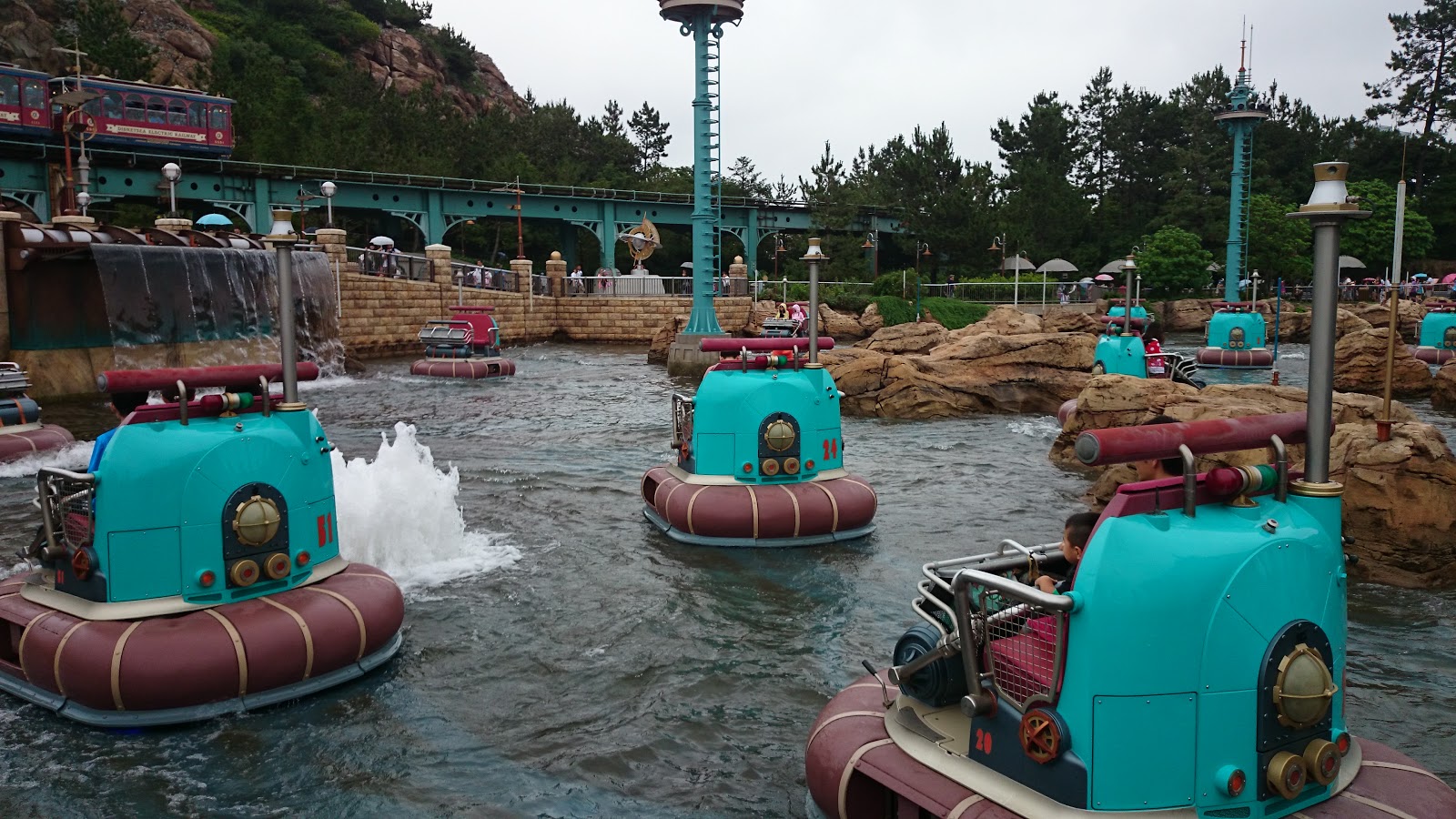 We had taken advantage of the FastPass system, where you can get direct entry ticket for a certain time slot for certain rides, for entry to StormRider, a simulation of flying into a storm with the cinema room mounted on actuators. I don't know why I would voluntarily ride an experience I try best to avoid in reality, but it was actually less bumpy than some recent flights. But fingers crossed the flight home will be much smoother. 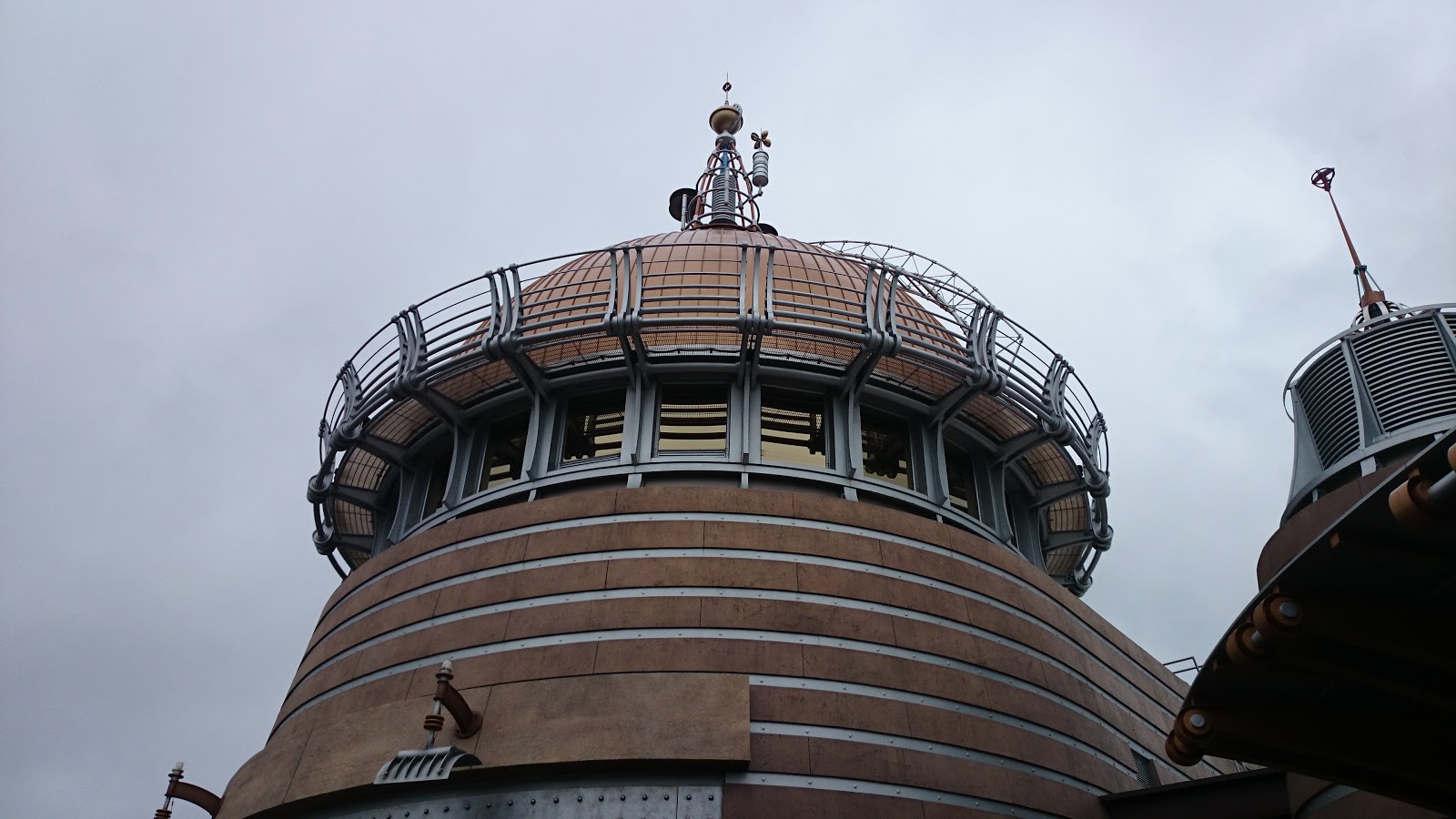 We hurried back to a vantage point over the Mediterranean Harbour to watch the Legend of Mythica show, which was quite spectacular, then once that was finished into the Mysterious Island section. Alex was eager to ride in the submarines of 20,000 Leagues Under The Sea. That was until he heard an alarm as the "underwater" cars pretended to suffer an emergency and he got all scared. It's all animatronics outside, a bit of harmless fun but nothing too amazing. 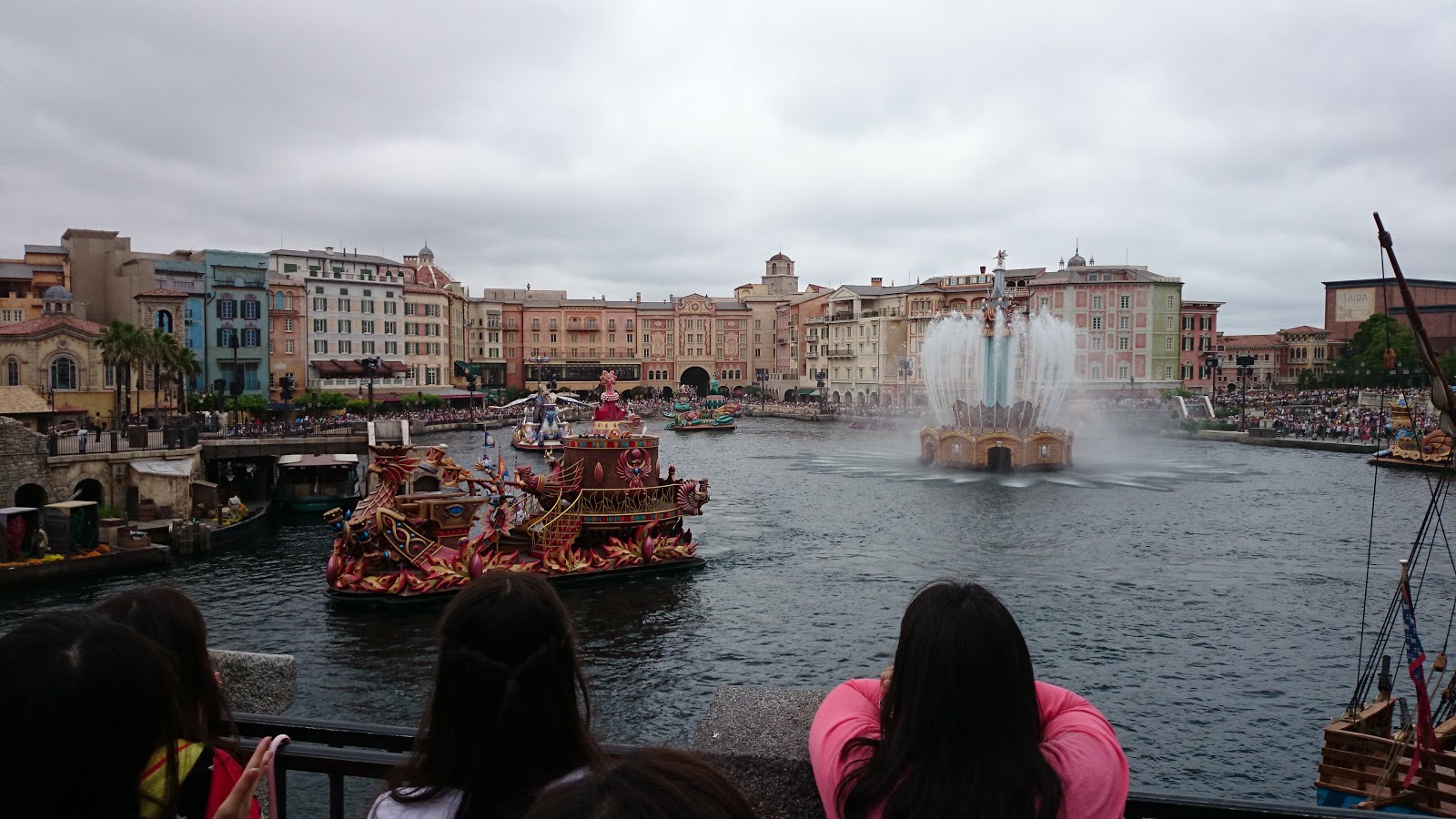 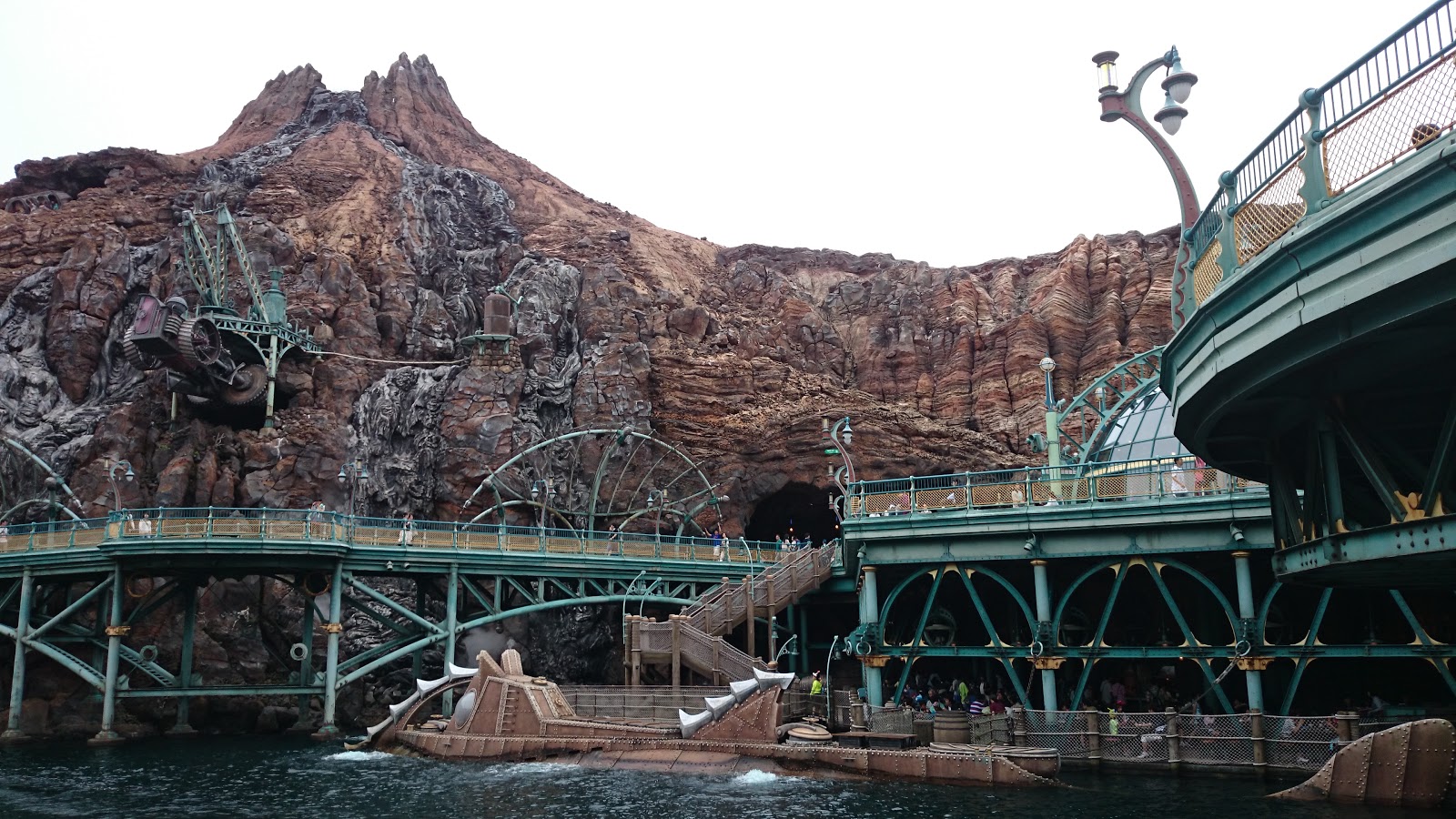 Alex's height and my fear precluded either of us from riding the Journey to the Centre of the Earth up the imposing artificial volcano, which occasionally spewed big bursts of flame. B, however, chose to go hurtling down the track at 75 km/h. Good for her. We had a snack. 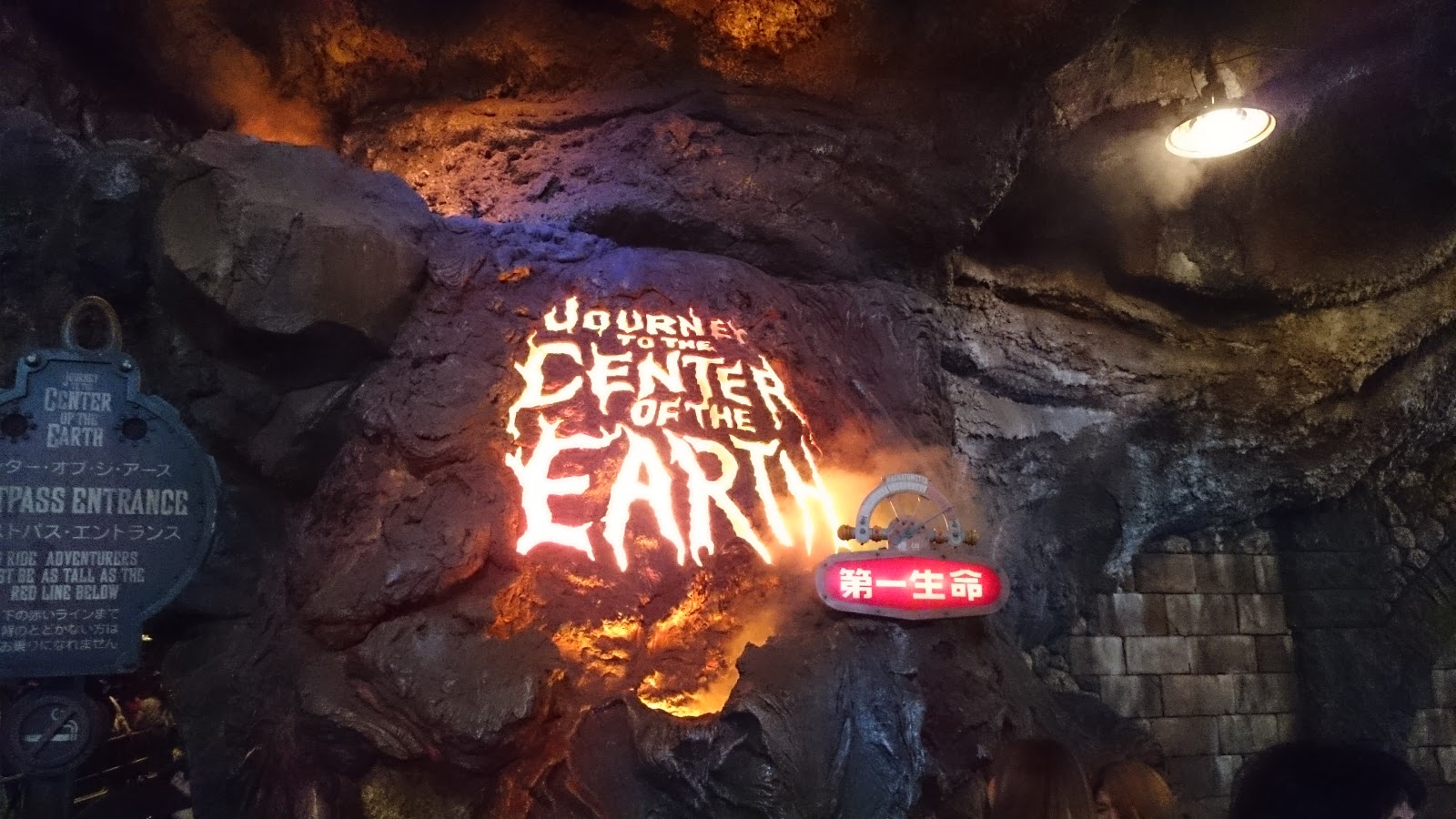 Colourful indoor Mermaid Lagoon is really for the littlies, but Alex was young enough to enjoy the ride. I got motion sick on the spinning teacups, err whirlpool. Alex and B had fun on the little Flying Fish Coaster. Then over the bridge to the Arabian Coast, or at least Disney's version of it. Come to think of it though the real version might be just as artificial these days. There was no queue at the Magic Lamp Theatre, which was really just a combination of live action show and 3D (4D if you count some of the effects) movie. All in Japanese, but B and I were given subtitle devices that detracted from the experience. 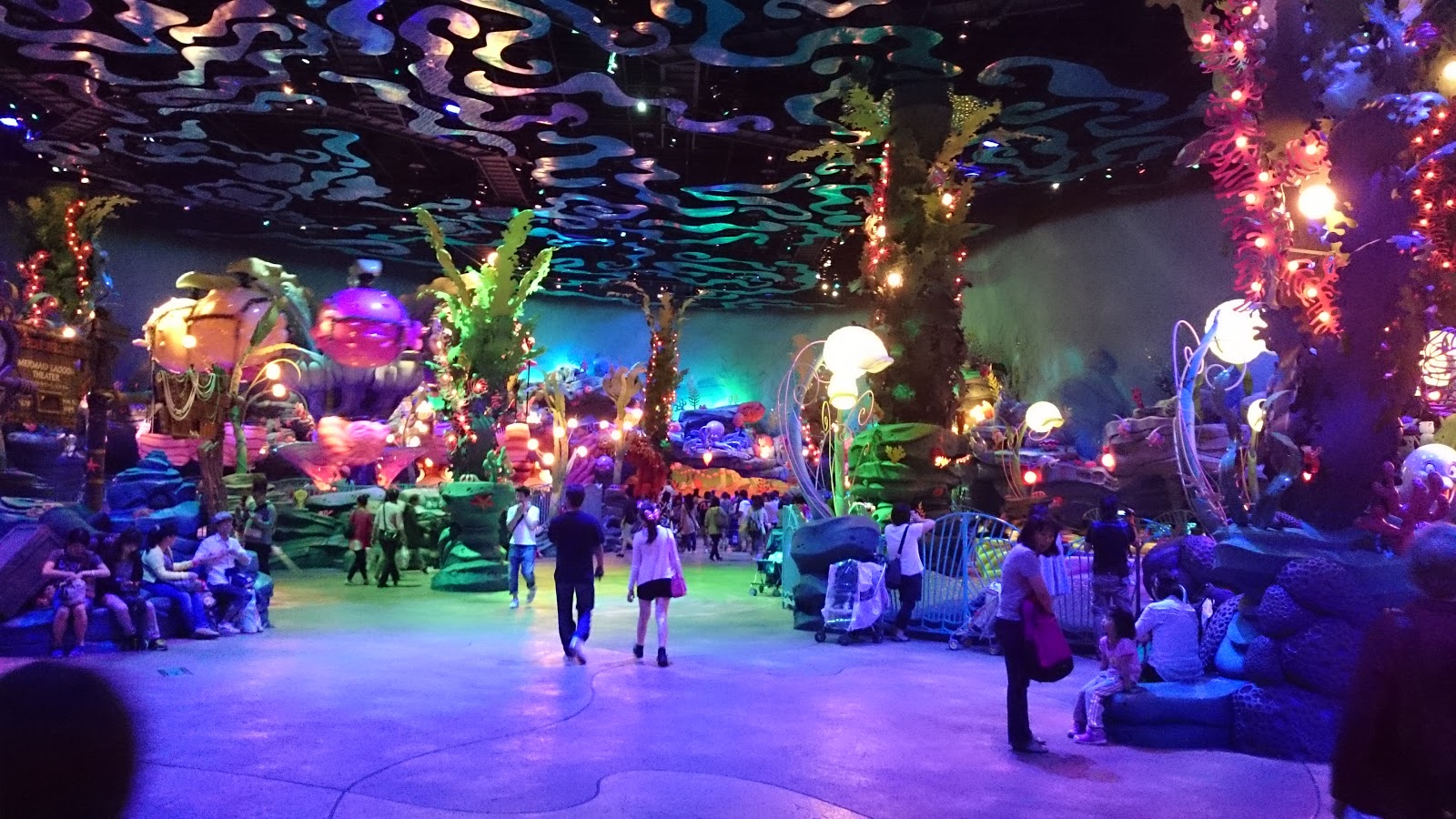 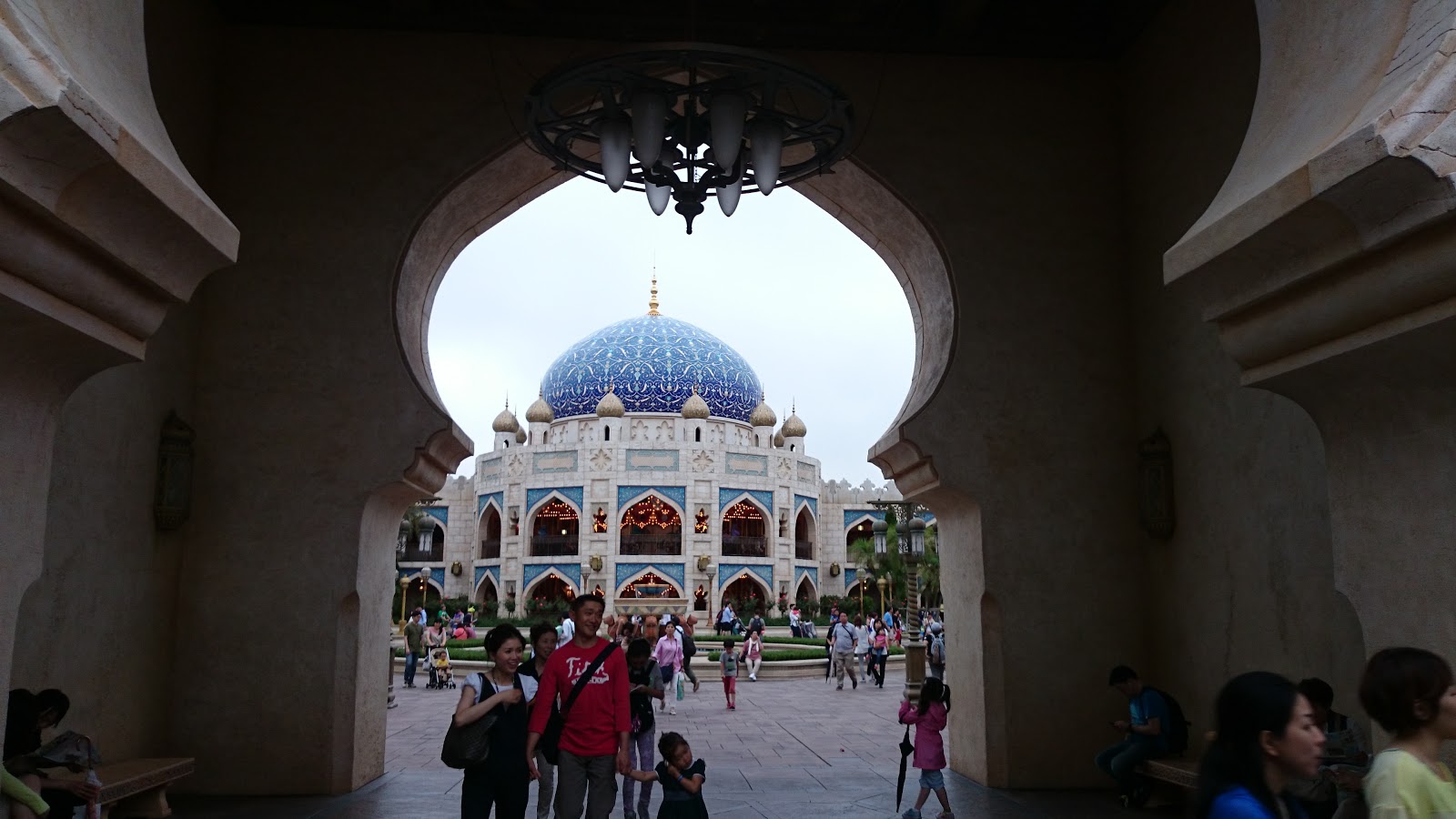 B and Alex whirled around in Jasmine's Flying Carpets and we all went on a ride through Sinbad's Voyage, sort of a Small Small World display except based on the tales of Sinbad. There's a message there about boat people from the Middle East trying to reach Australia said the cynical side of me. 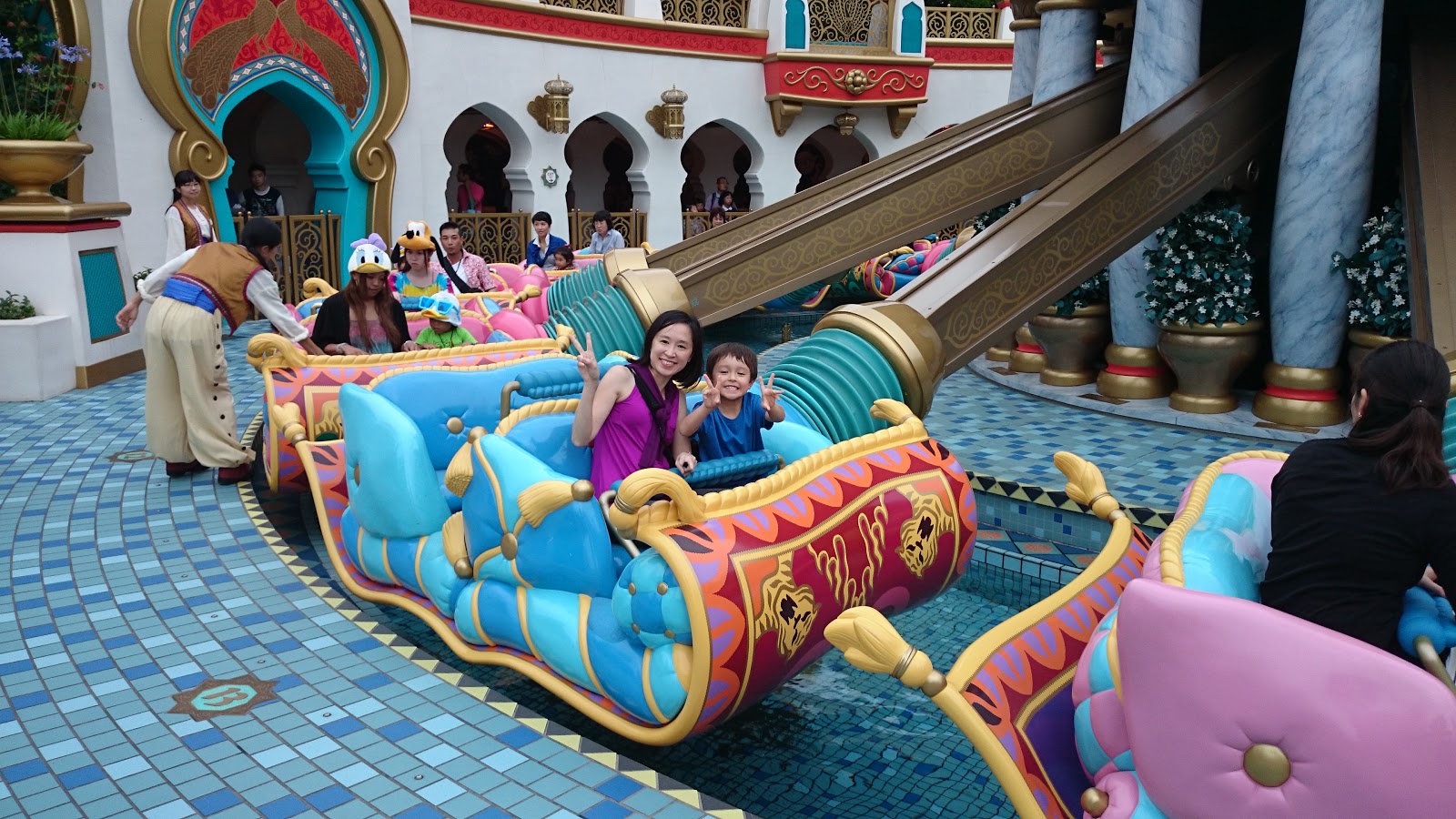 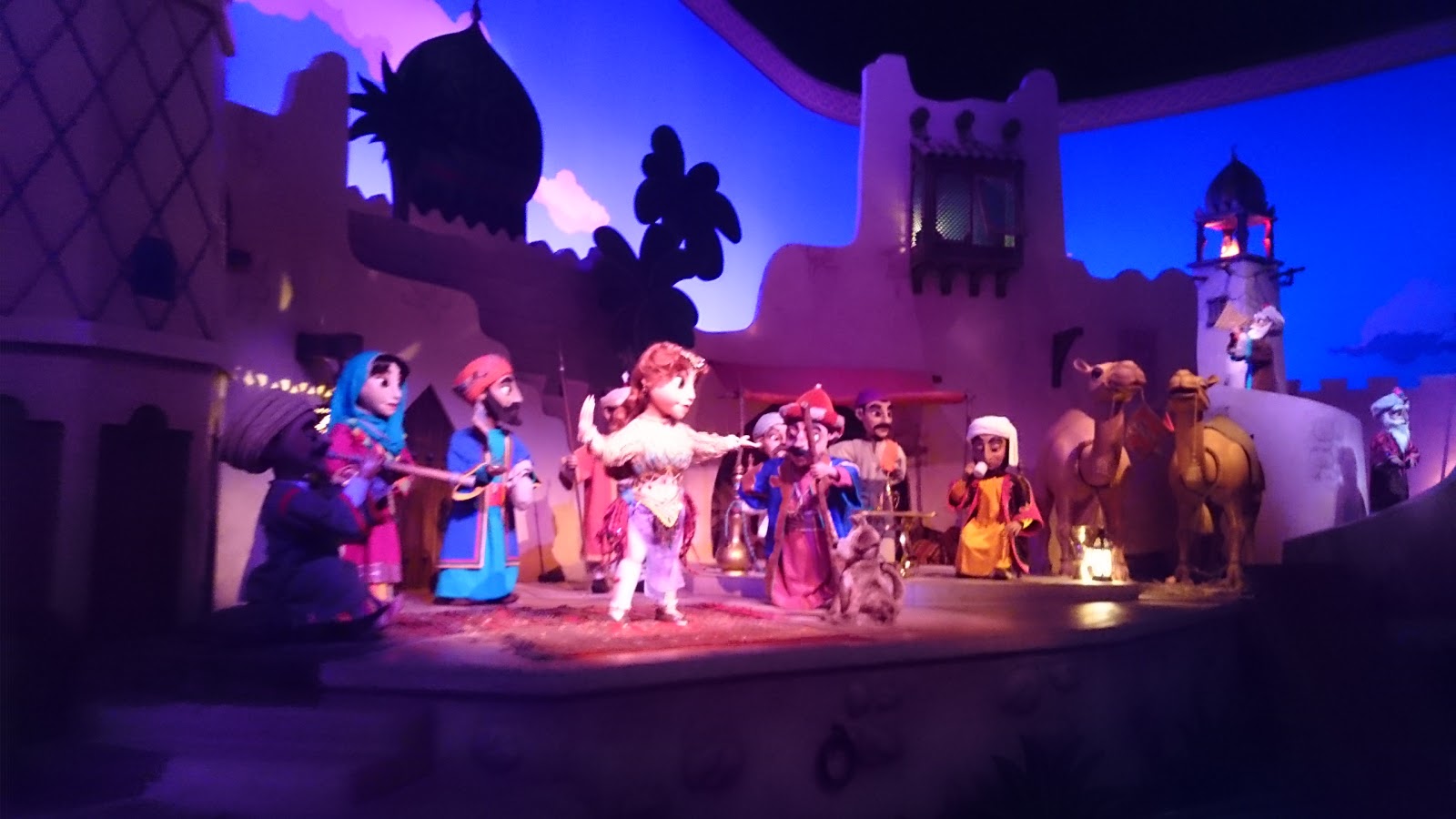 The light was fading, lending a great atmosphere to the park, especially at the Lost River Delta where we waited for a steamer to return us to the American Waterfront and food. There are lots of food outlets at DisneySea, some not terribly expensive. We had burgers and seafood chowder at the Cook-Off. It was okay, food for hungry stomachs. 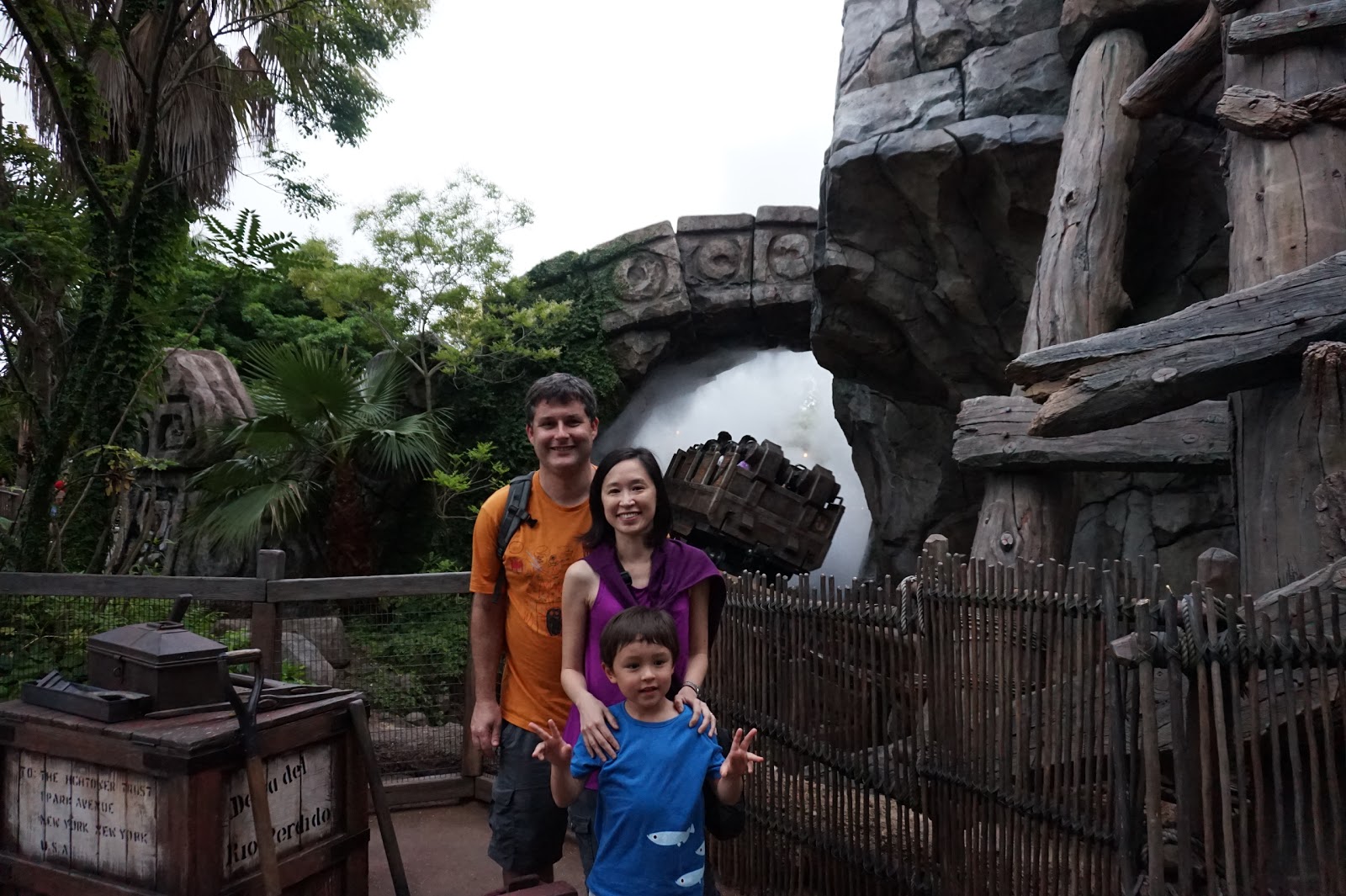 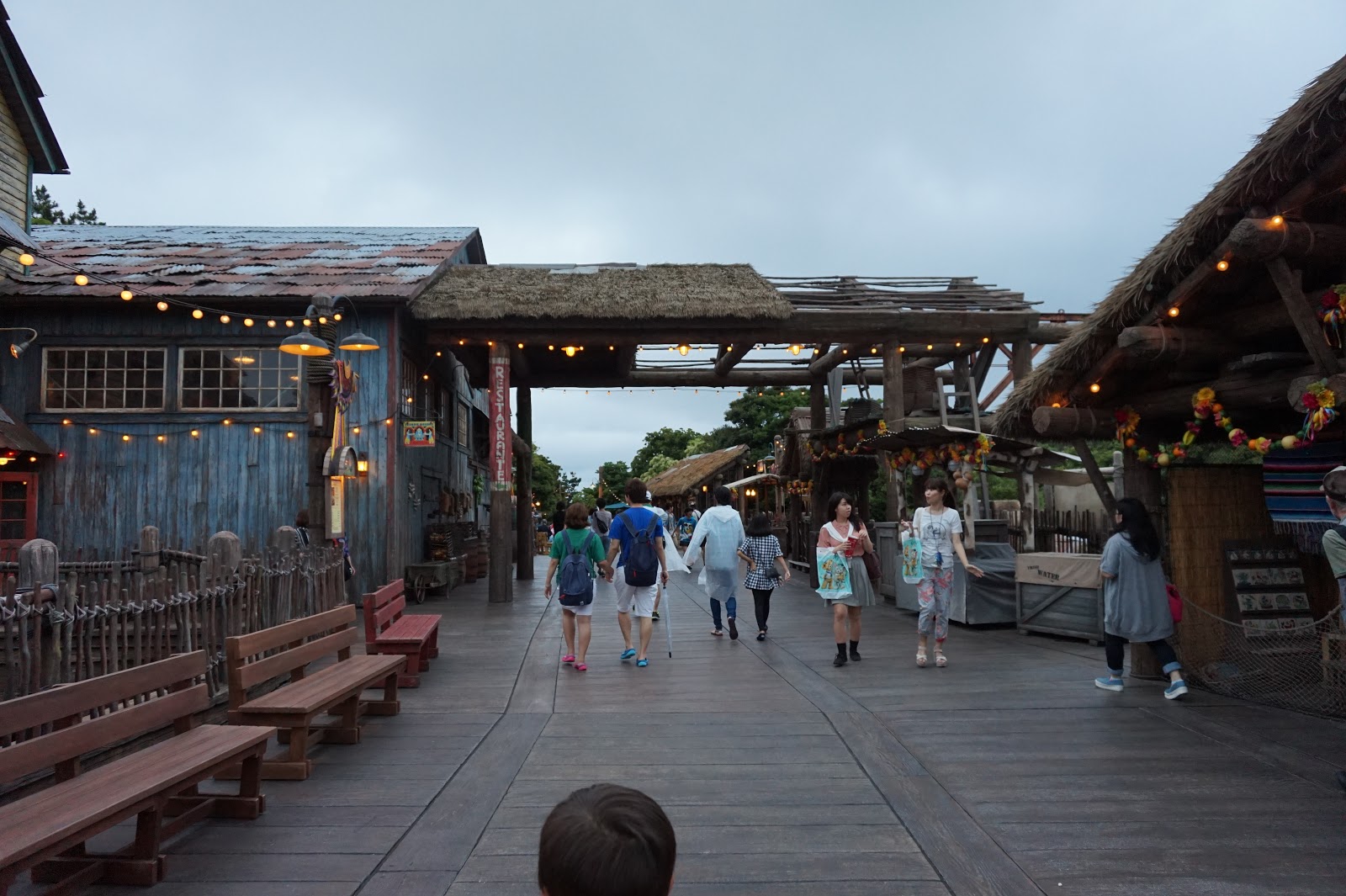 The Tower of Terror and SS Columbia looked just as impressive at night, but we were again in a hurry for a show - Fantasmic - on the harbour. There were colourfully lit up boats, balloons, flames and fireworks. Wonderful! 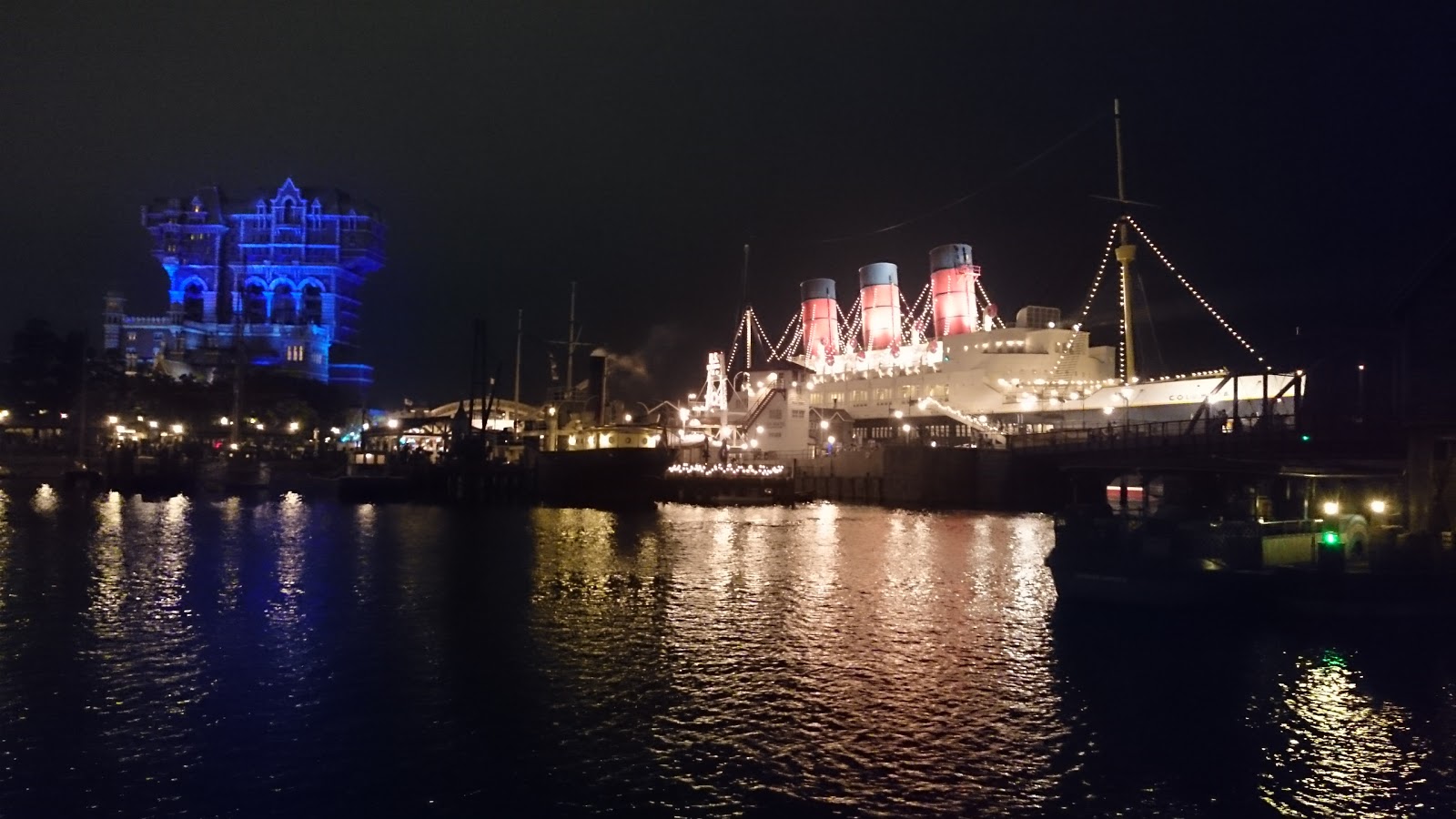 Then, as we made our way towards the exit came the nightly fireworks display. Not quite as good as viewing it at Disneyland, but still a nice way to end the visit. 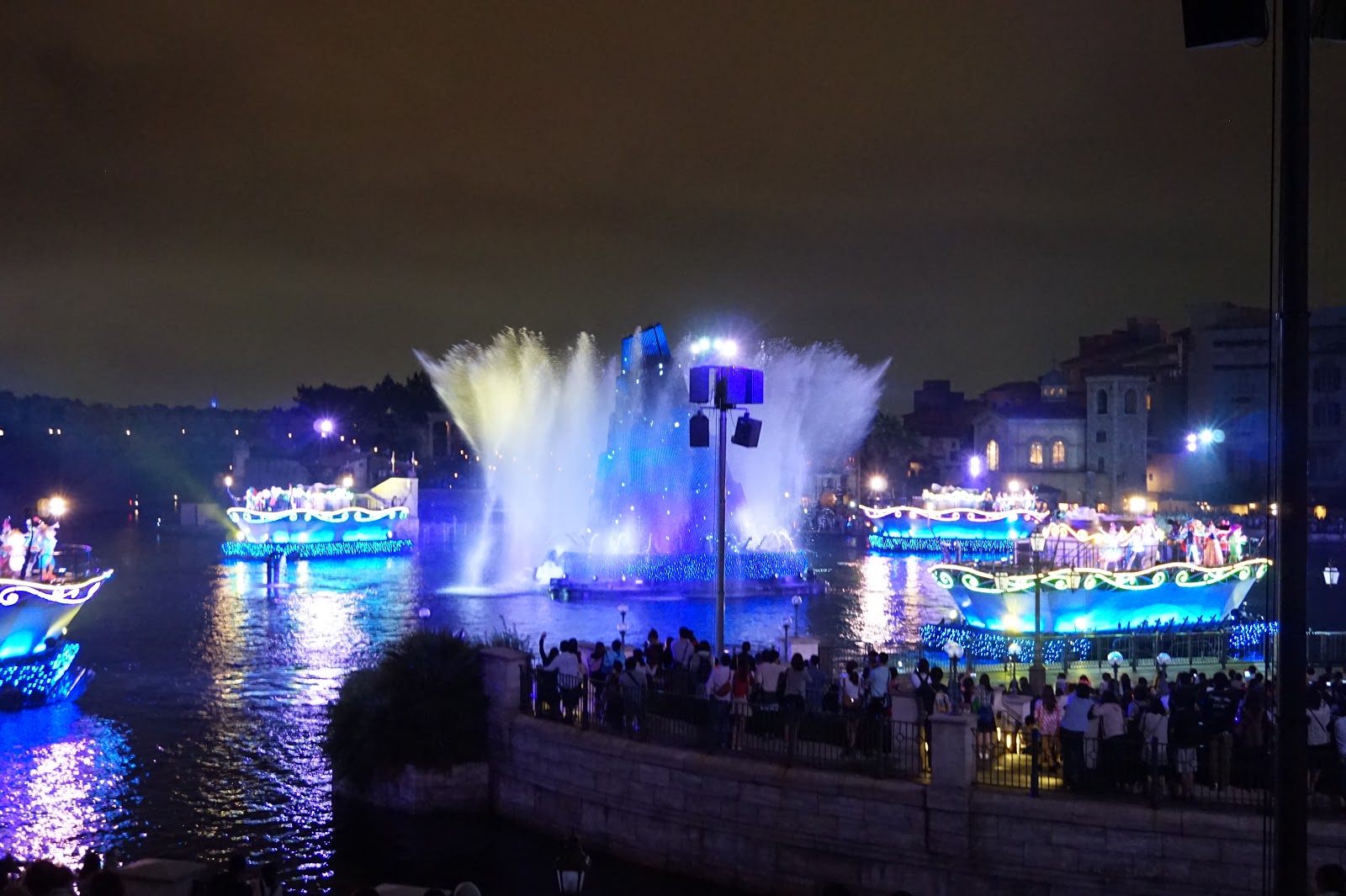 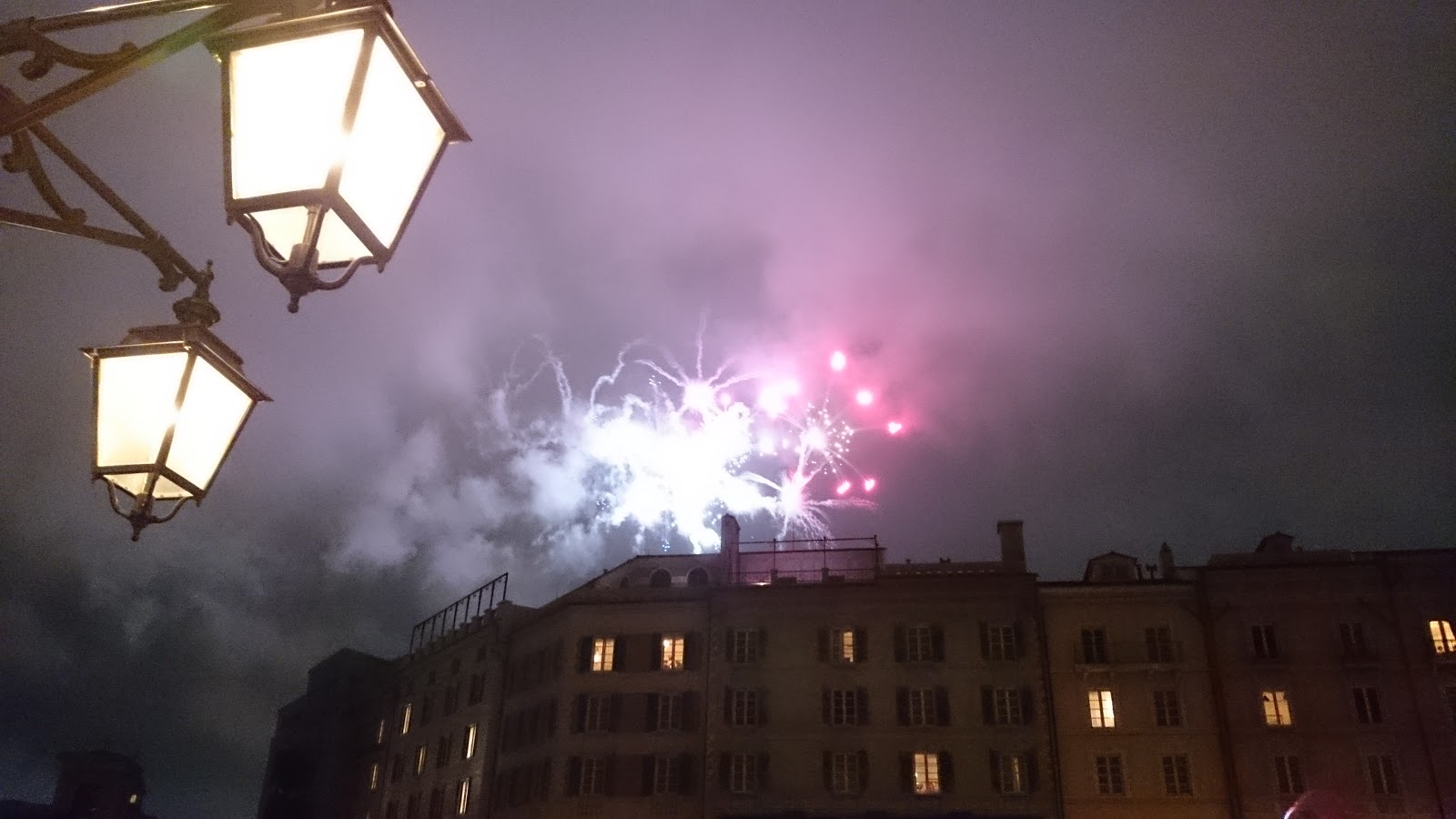 When we arrived back at Shinjuku it was a supper at Sakura Sushi across the road from the hotel. We always go there and always enjoy it.

I think I prefer DisneySea to DisneyLand. There queues were much shorter, 40 minutes or less, though perhaps that was the rain. The park itself looks more impressive and there's an exotic atmosphere without all the complications. In the Disney world everyone smiles (or is sacked, I presume), there is almost no crime bar the cartoon kind and it brings a sense of nostalgia for a world that probably never existed. I can understand why people return again and again, though sadly it's nothing but an artifice.