Horrors and happiness in Hiroshima 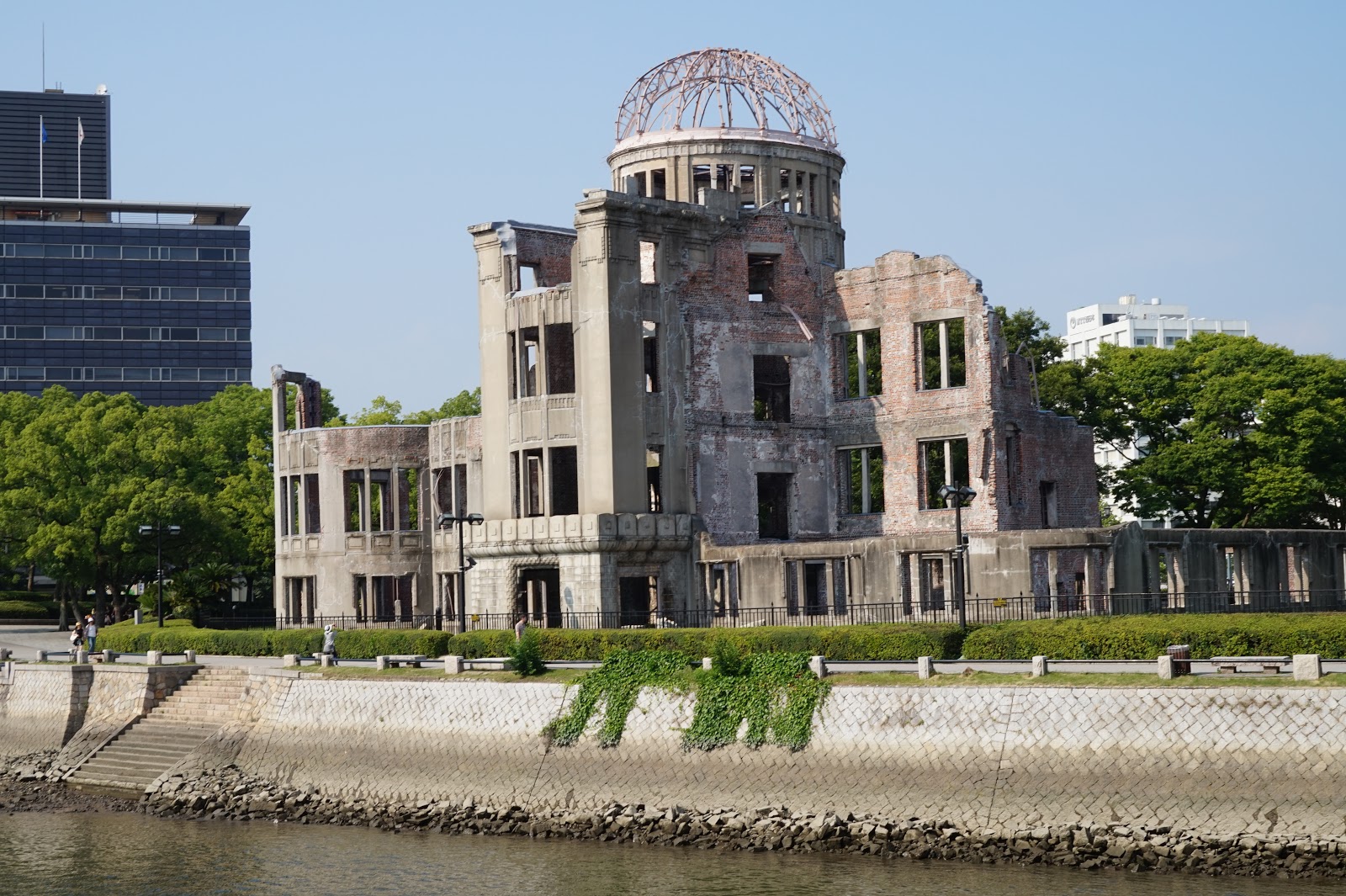 I've been hoping, promising, Alex for so long that he could ride on an Anpanman train like those in his book, but again I failed. The whole morning was a bit of a stuff up. We checked out of the hotel and caught a tram to the station, but the travel agency desk where JR Passes are handled didn't open until 10am. And the next Anpanman train wasn't until mid afternoon, too late.

He didn't catch a Botchan Ressha replica steam tram either, but at least he saw it parked at the Dogo Onsen terminus.

The station cafe where we had happy memories of a breakfast of thick toast, salad and spaghetti back in 2008 was gone, replaced by a Japanese bakery. The colourful pachinko parlour beside the station was derelict but for a basement carpark. 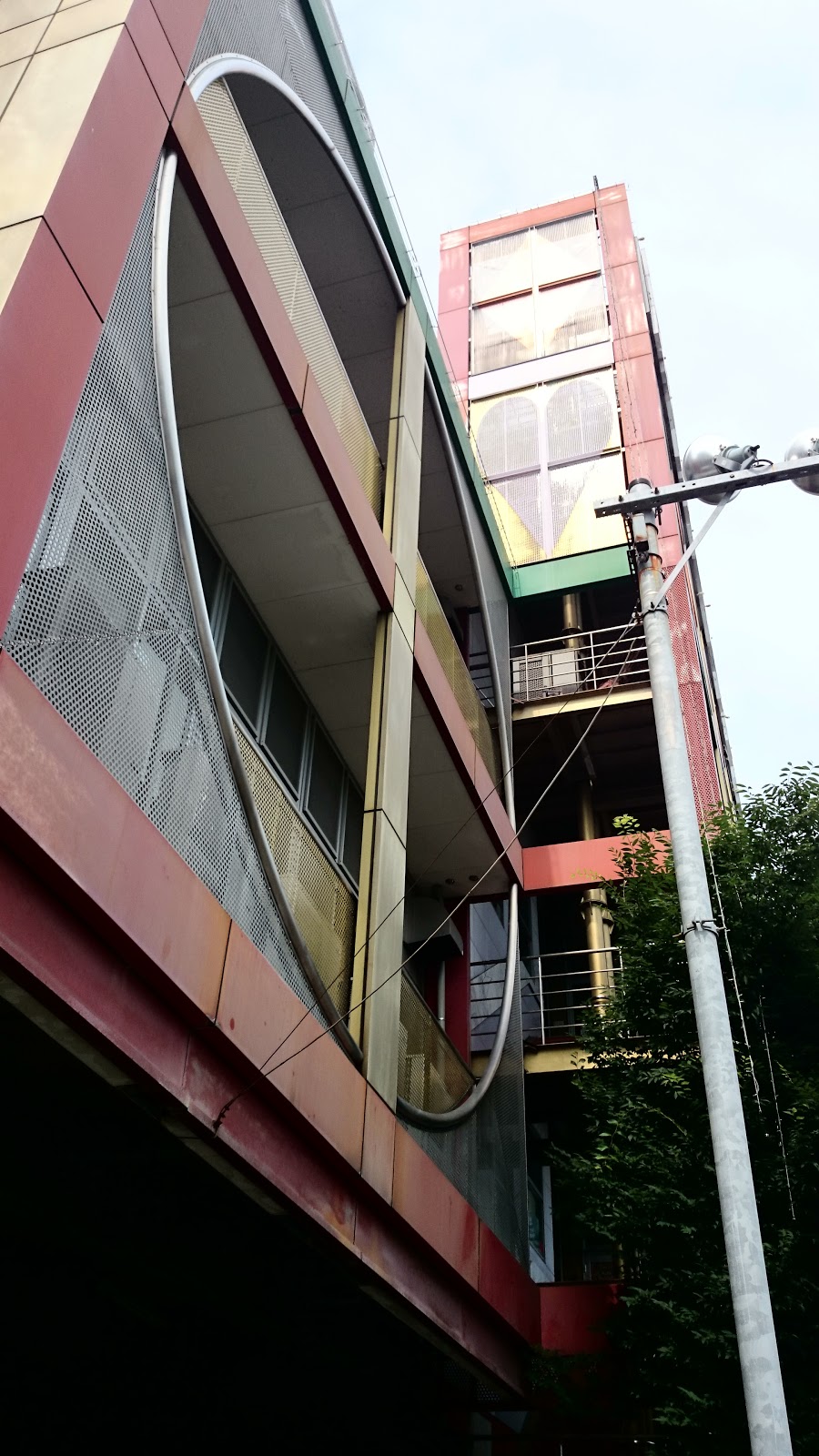 We went to catch a short private Iyo Dentetsu train to the station under Takashimaya, but had to contend with watching it as the level crossing blocked our path as it crossed the road. 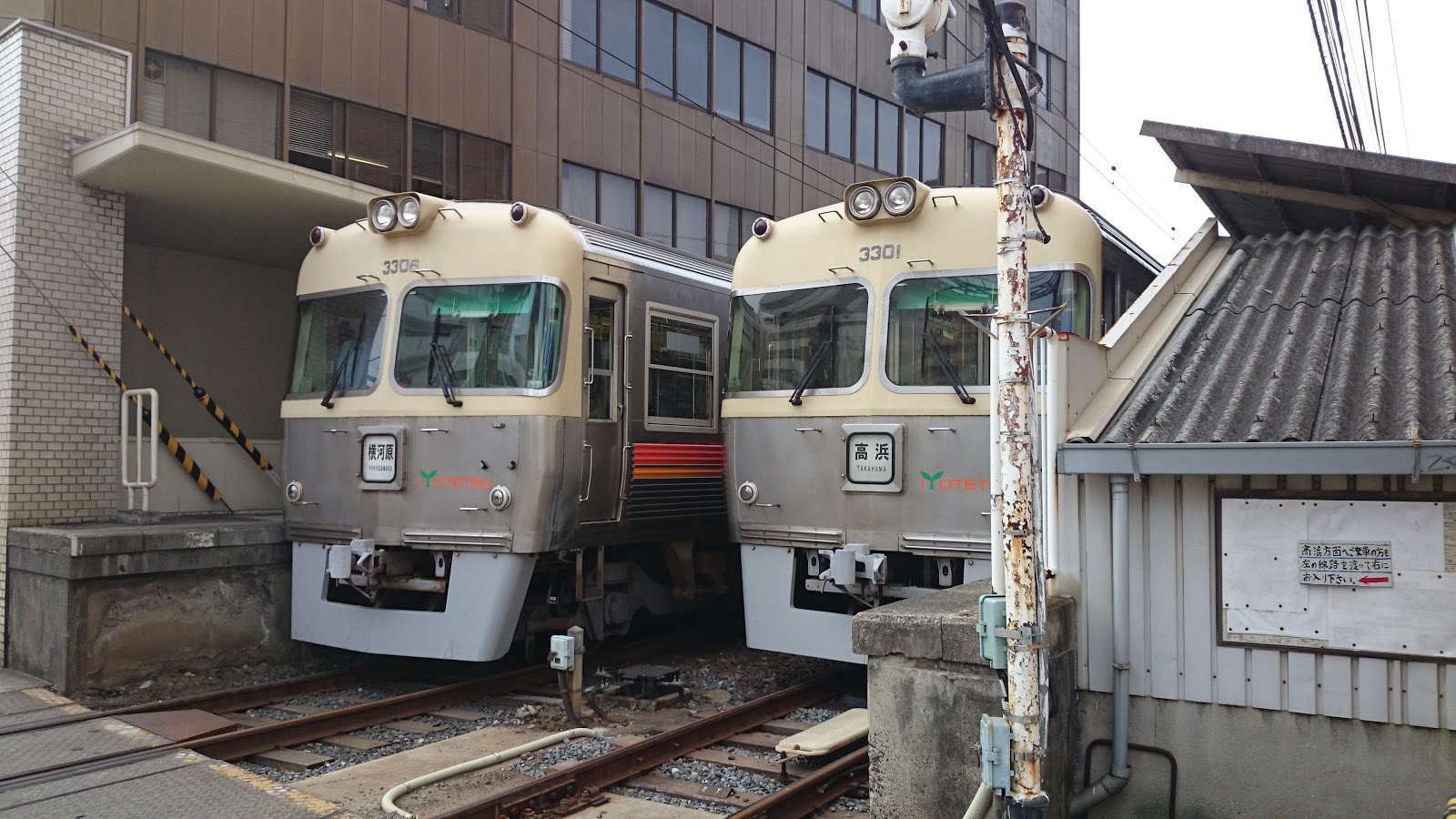 But I still love Matsuyama. I'd come back any day.

A fast, tilting electric Shiokaze express carrier us on the two and a half hour journey from Shikoku and back across the massive Seto Bridge to the main island of Honshu. There's pretty scenery as it winds along the coast, past rice paddies and small towns and through the mountains. All of us slept for part of the journey. 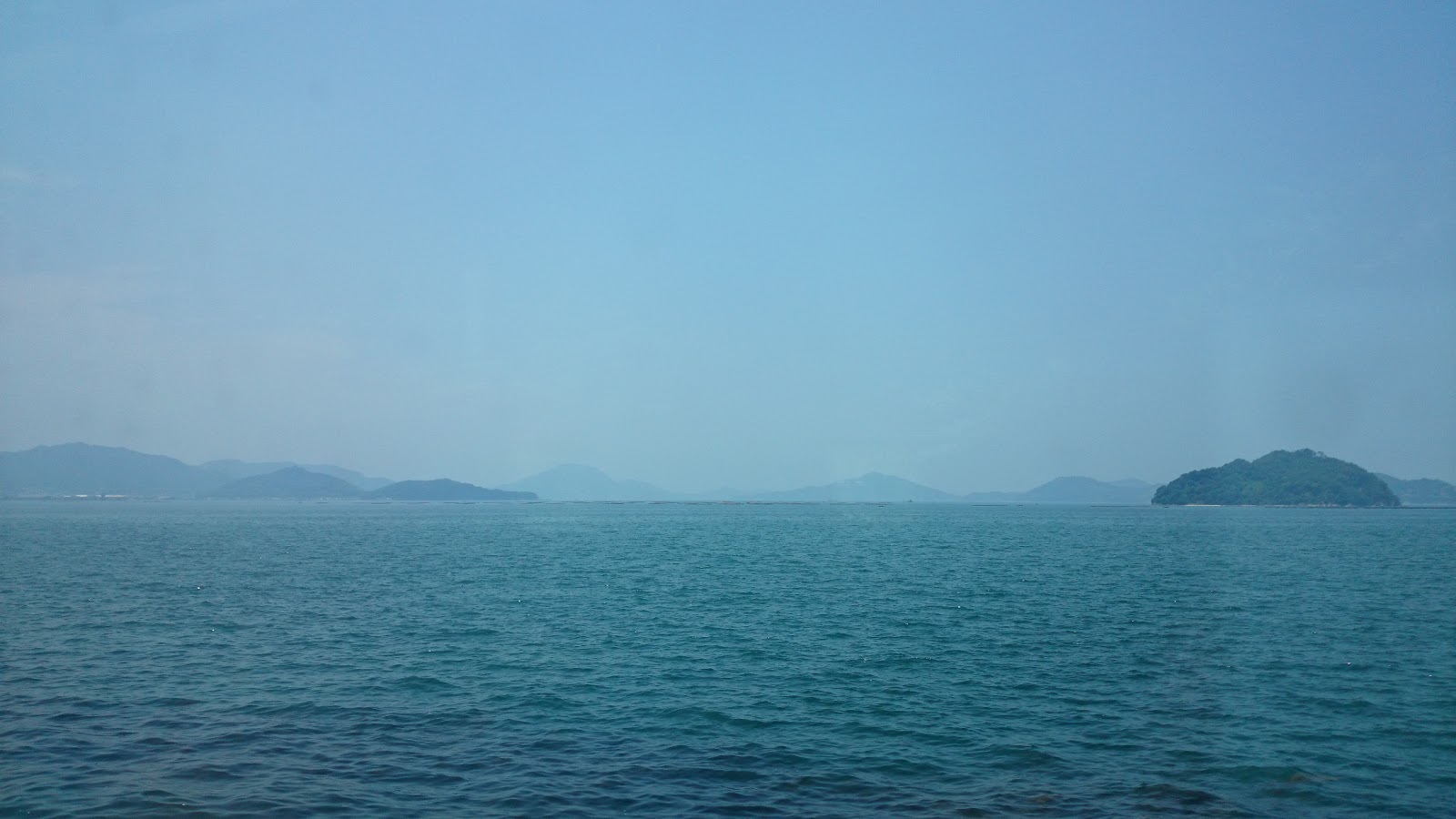 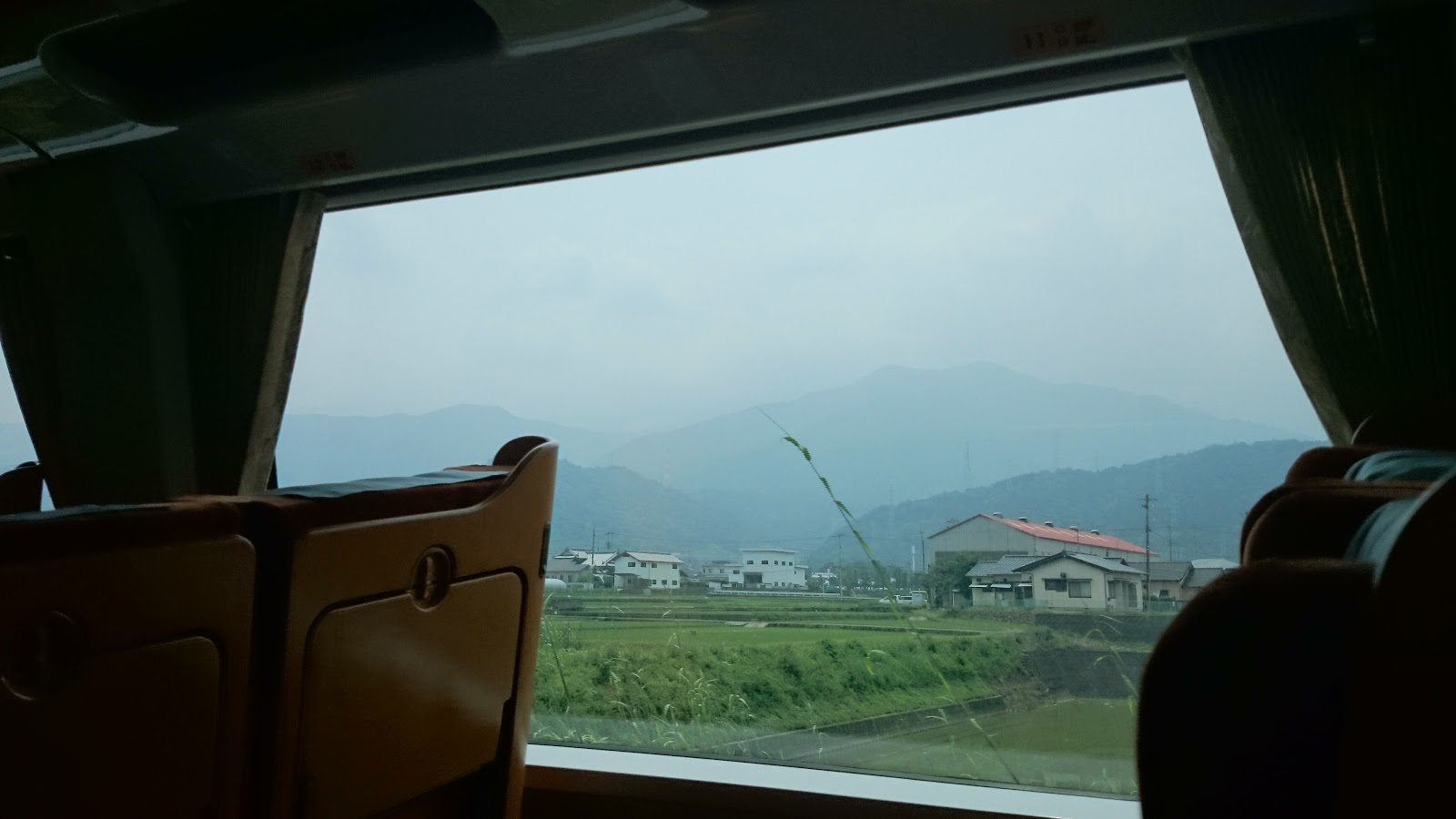 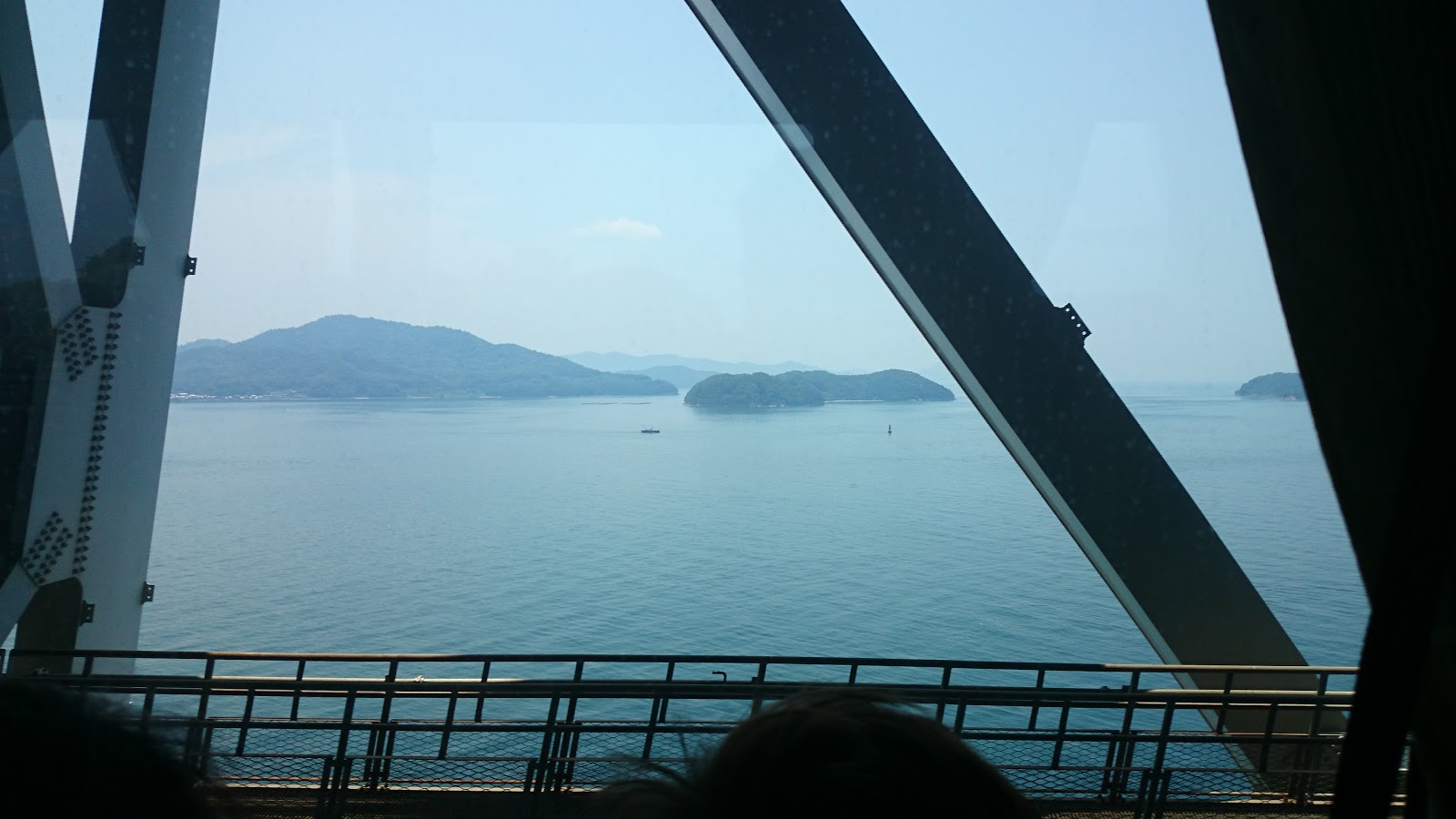 At the terminus of Okayama one of the tyres on our bag shredded again. We had to wolf down our tonkatsu and oyakudon set lunches before racing to catch a Sakura Shinkansen. Alex, despite having caught Shinkansens countless times, was impressed by their speed. At least he stayed away from the toilet. I enjoyed the comfort. 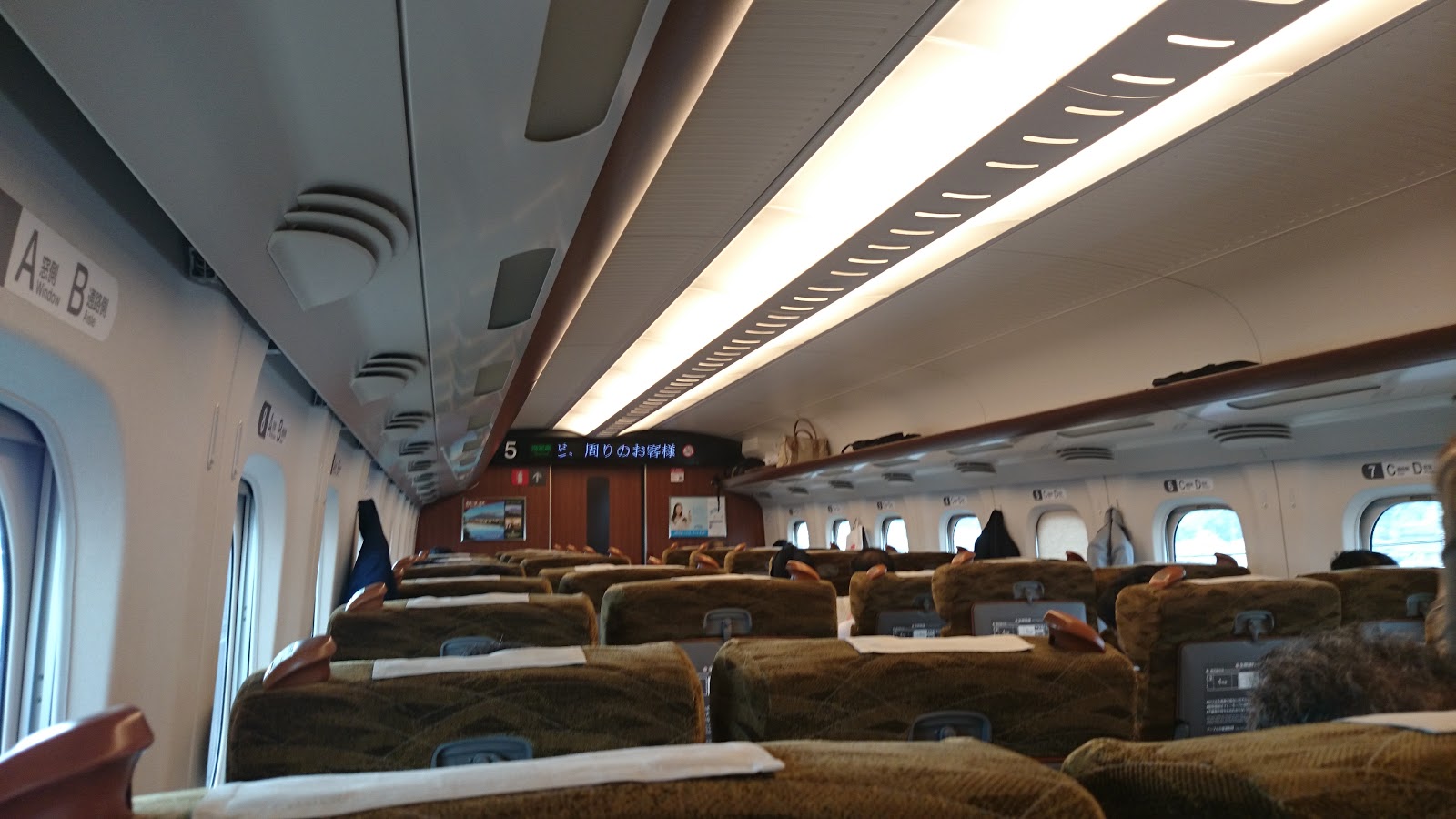 It was less than an hour's journey to our final destination of Hiroshima. After dumping our bags we caught a tram down to the symbol of Hiroshima, the remnants of the Trade Centre, it's skeletal dome and brickwork the sole remaining public example of the horrors of the atomic bomb blast over the city. 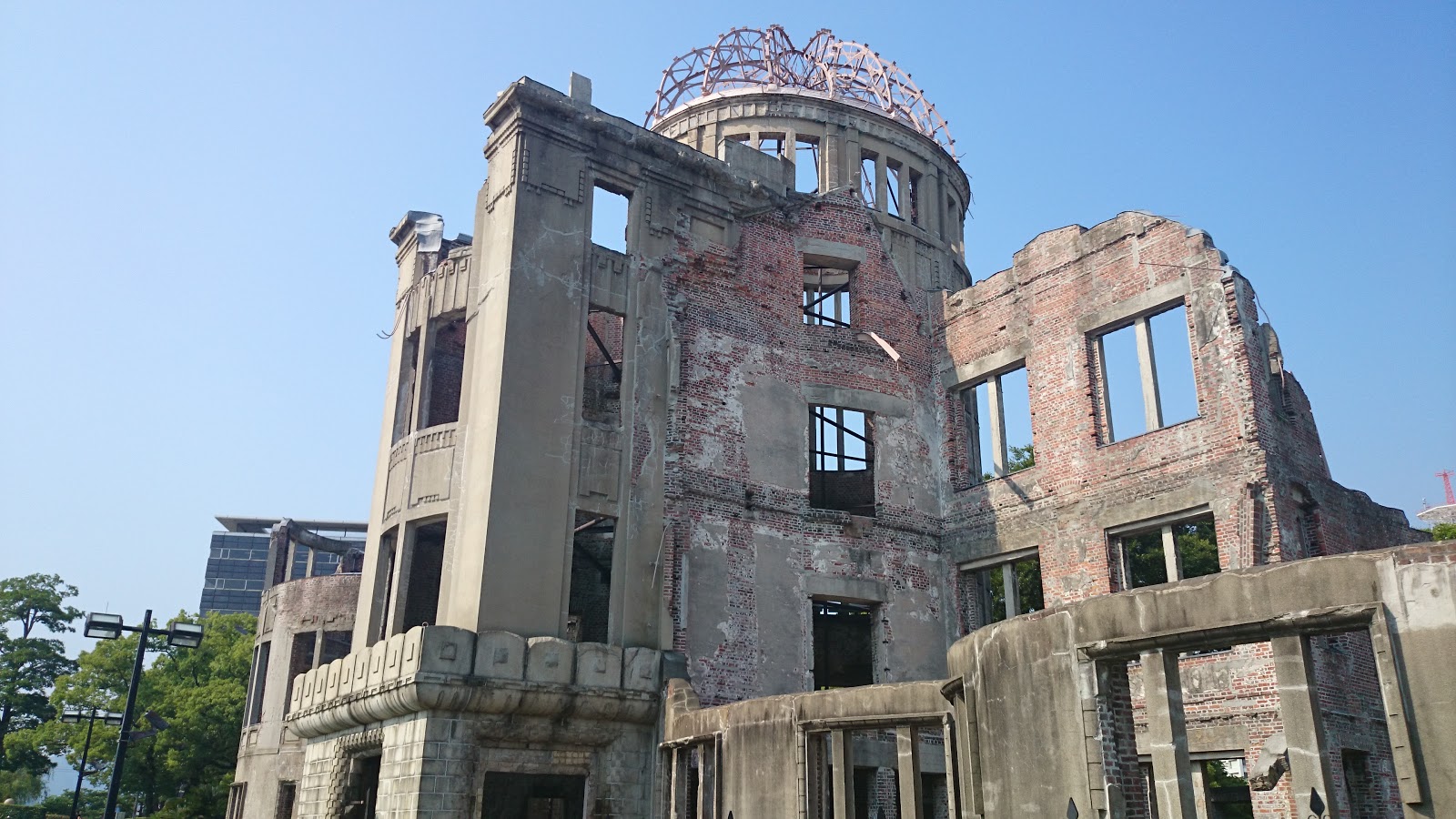 It is estimated that over 200,000 people died as a consequence of that explosion. We tried to explain the events to Alex. He's perhaps too young to grasp it, but then there were many victims younger than him. We walked under the hot summer sun through the Peace Memorial Park. Alex rang the bell for the child victims, like Sadako, displays full of paper cranes. 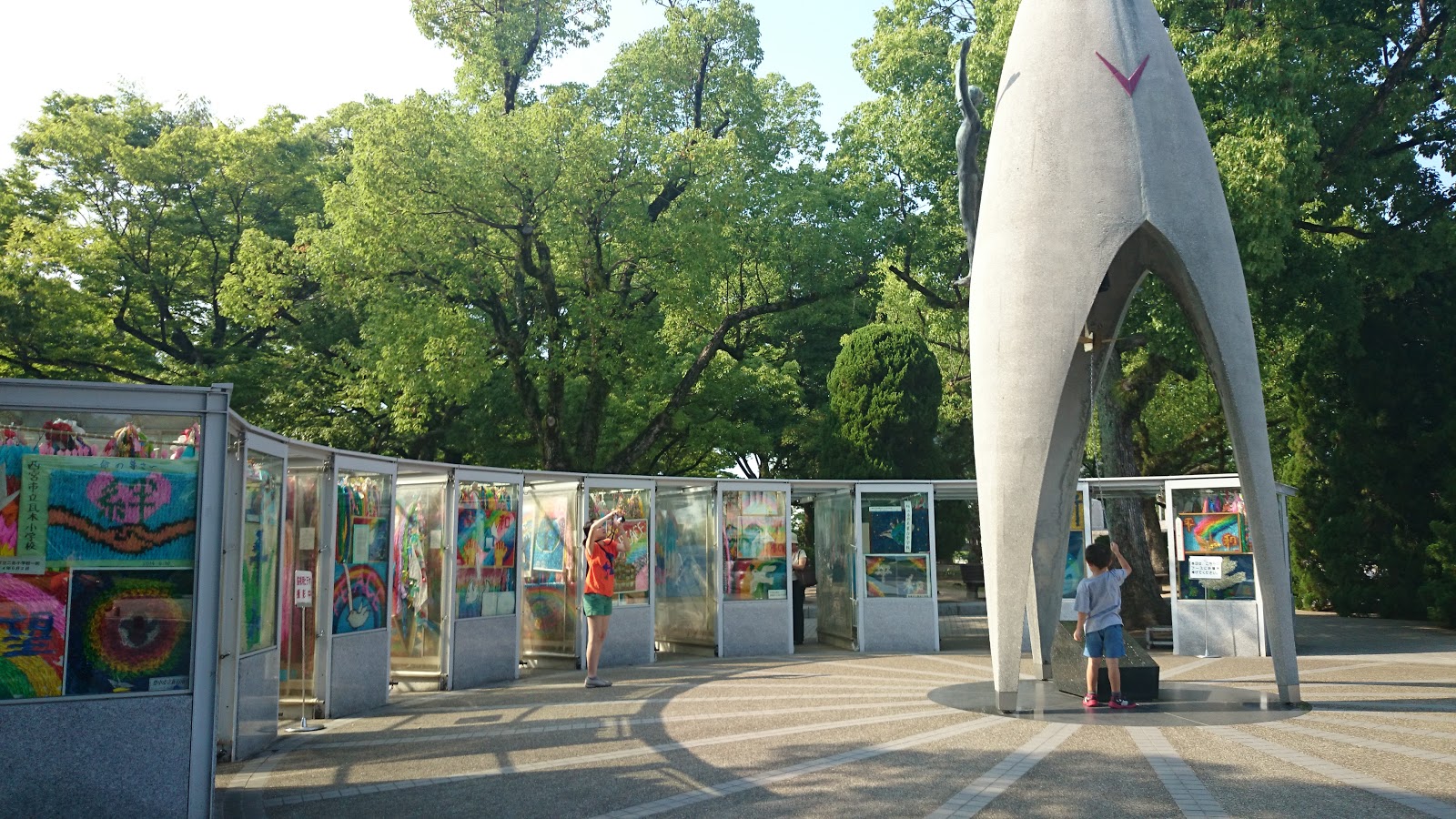 B and I have visited the memorial museum before, but it was just as moving as then. The devastation, roof tiles melted, glass shards embedded into concrete, warped, charred, twisted objects. And the human victims, their tales so terrible. Photos of injuries, tattered school uniforms of those who succumbed to the burns or the radiation. A visitor shrieking at the recreated sight of manikin children, like zombies, wandering through the rubble, burned skin hanging like shreds. 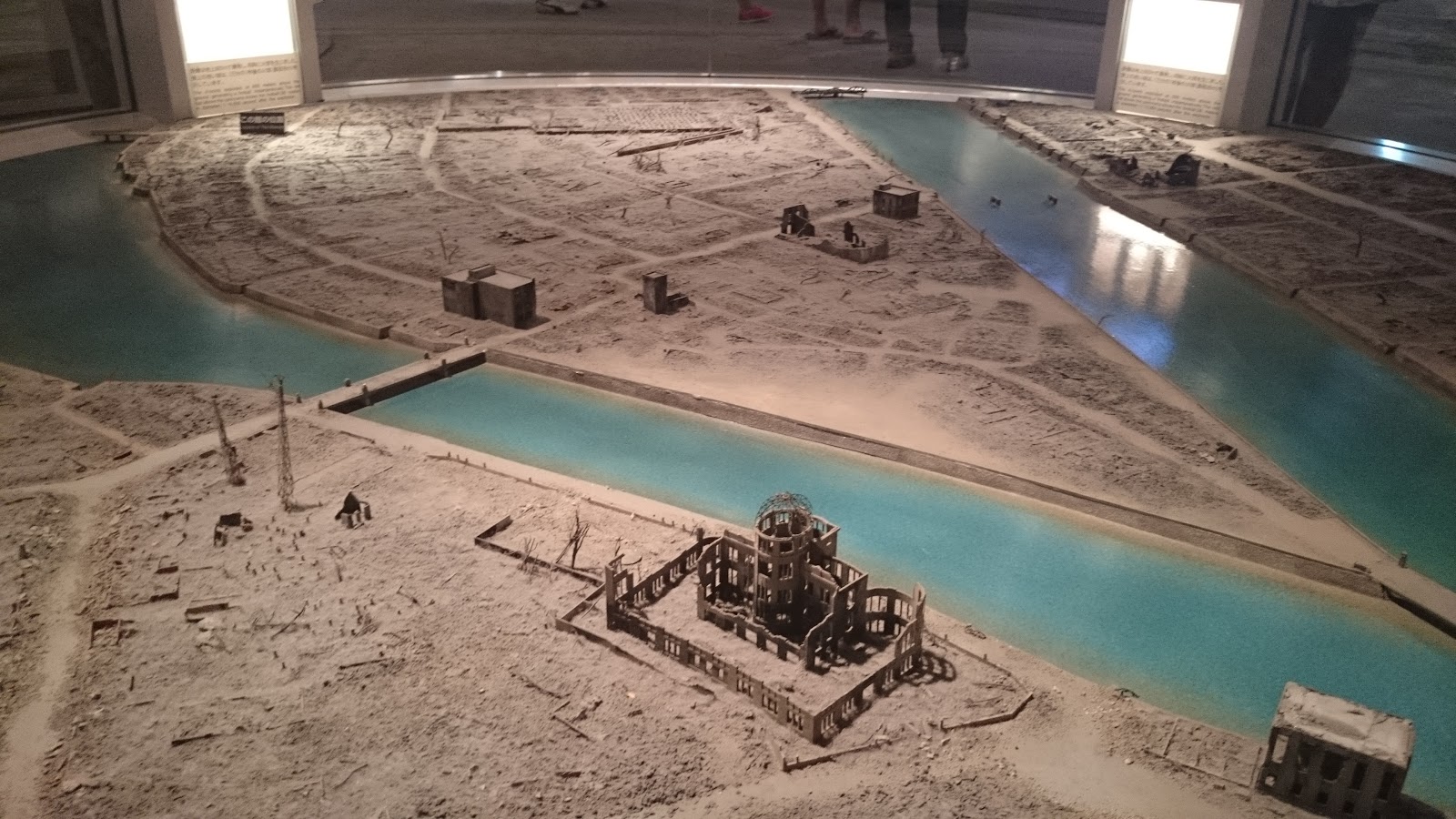 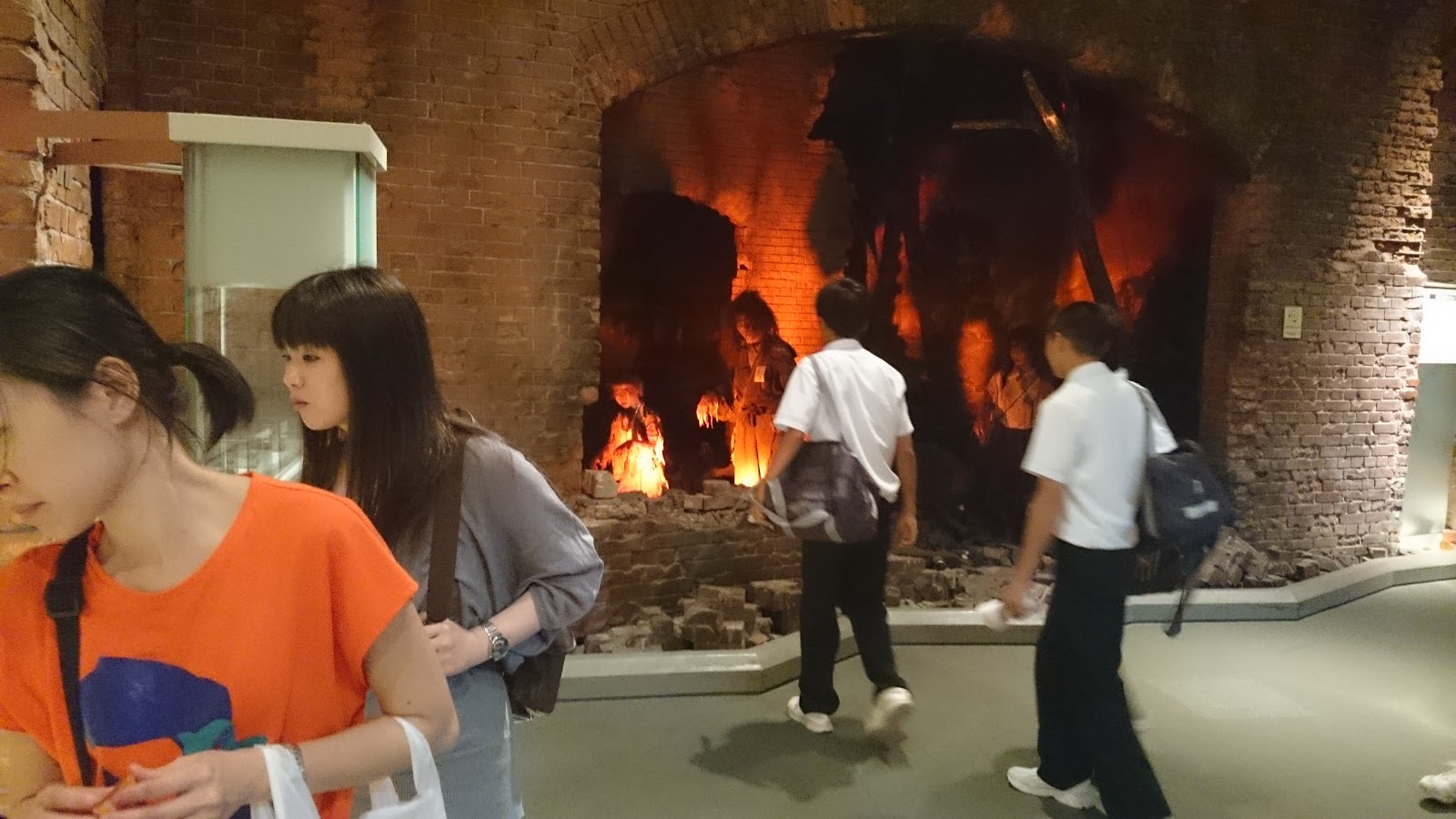 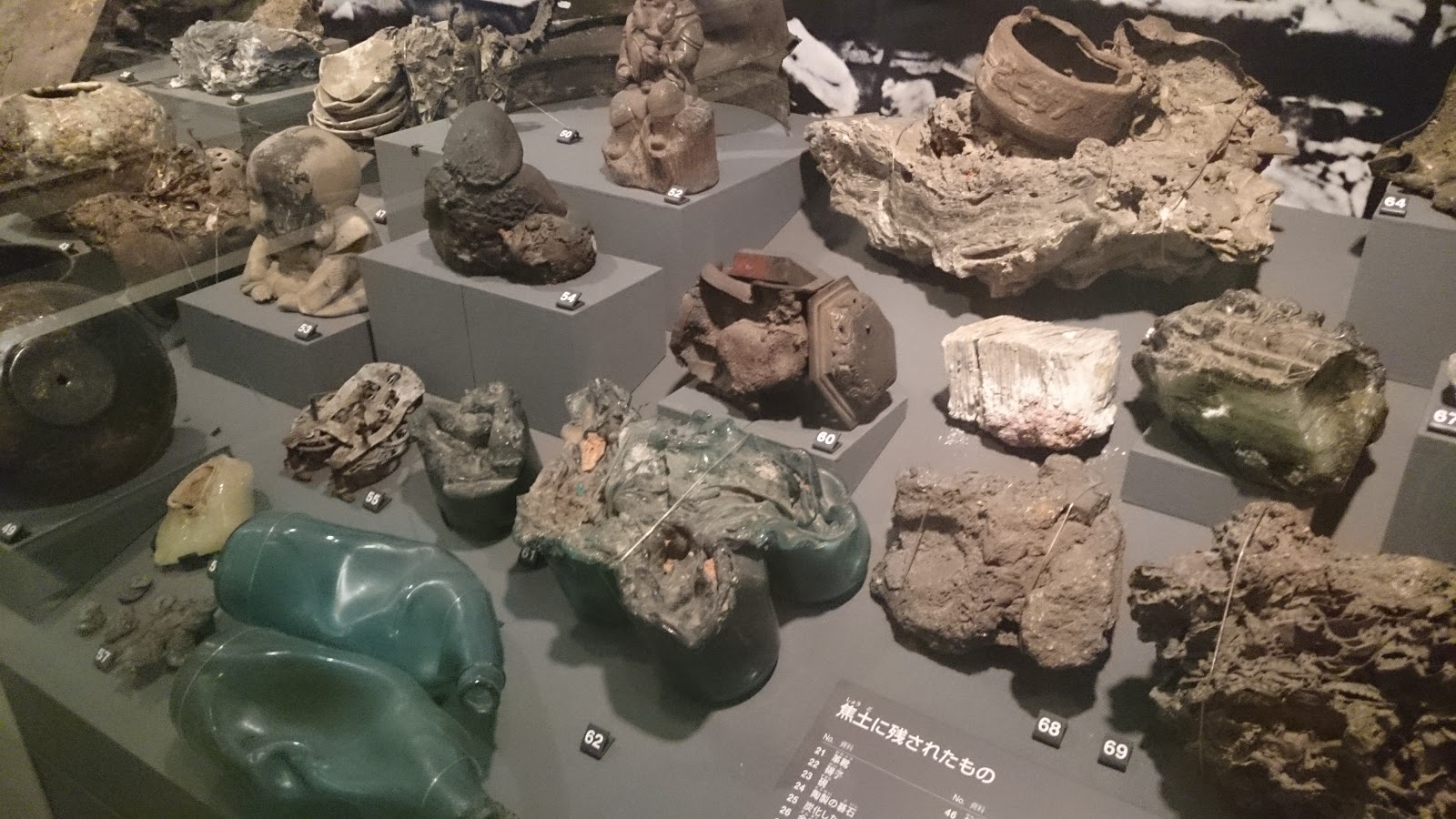 It is terrible, but it must be seen. The museum shatters the delusion that war is a grand thing. It is not. It is horrible. 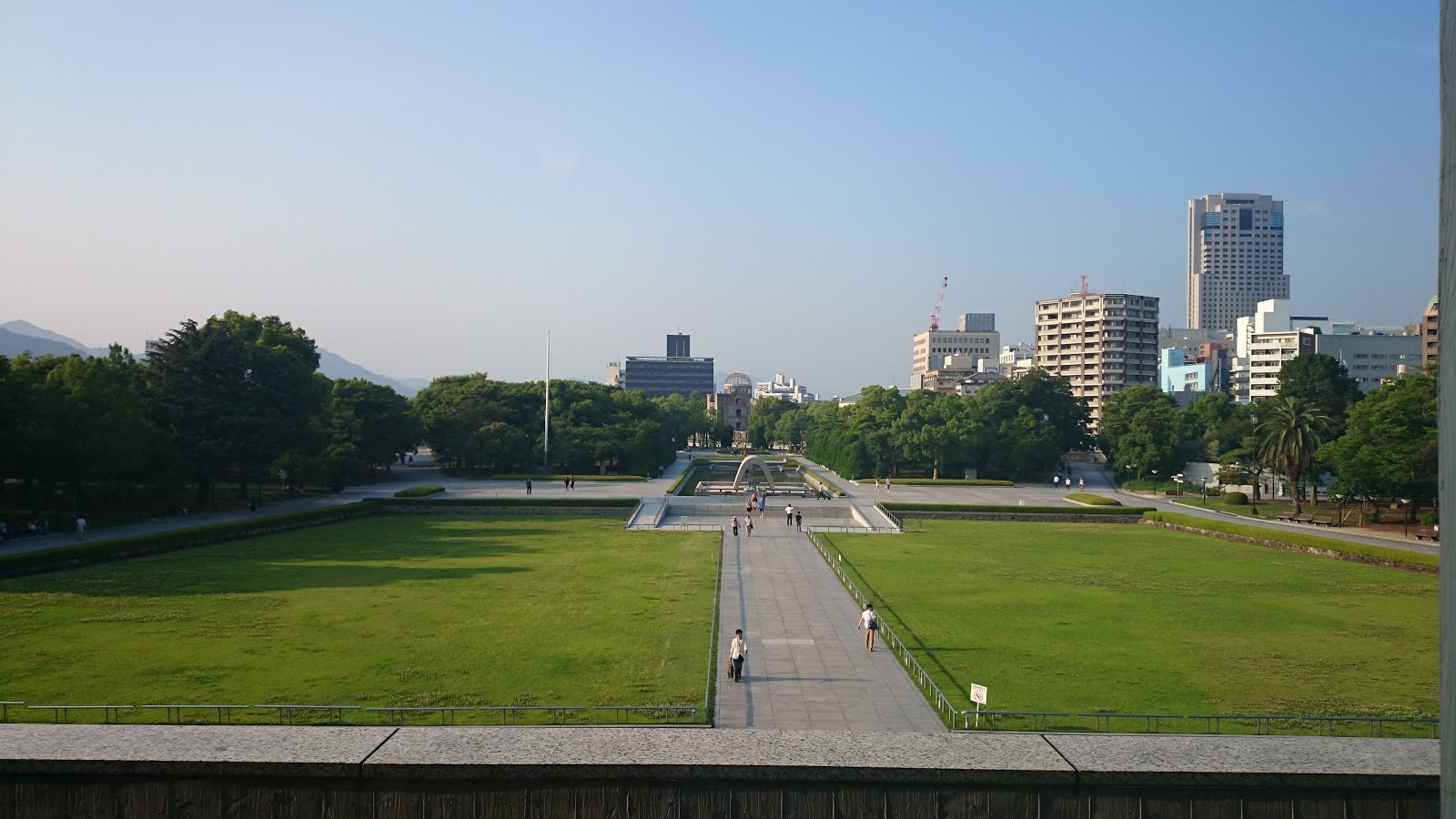 But despite the utter devastation, almost 70 years later Hiroshima is very much alive. We walked through the covered arcade in search of dinner and the place was thrumming with life. While Matsuyama felt sleepy, Hiroshima was full of energy. B had noodles at Ippudo, but I could see no point dining somewhere with a branch in Sydney. I saved myself for Okonomimura, a 50 year old building devoted to Hiroshima's version of okonimyaki, where they add noodles to the egg and cabbage pancake. Very yummy. 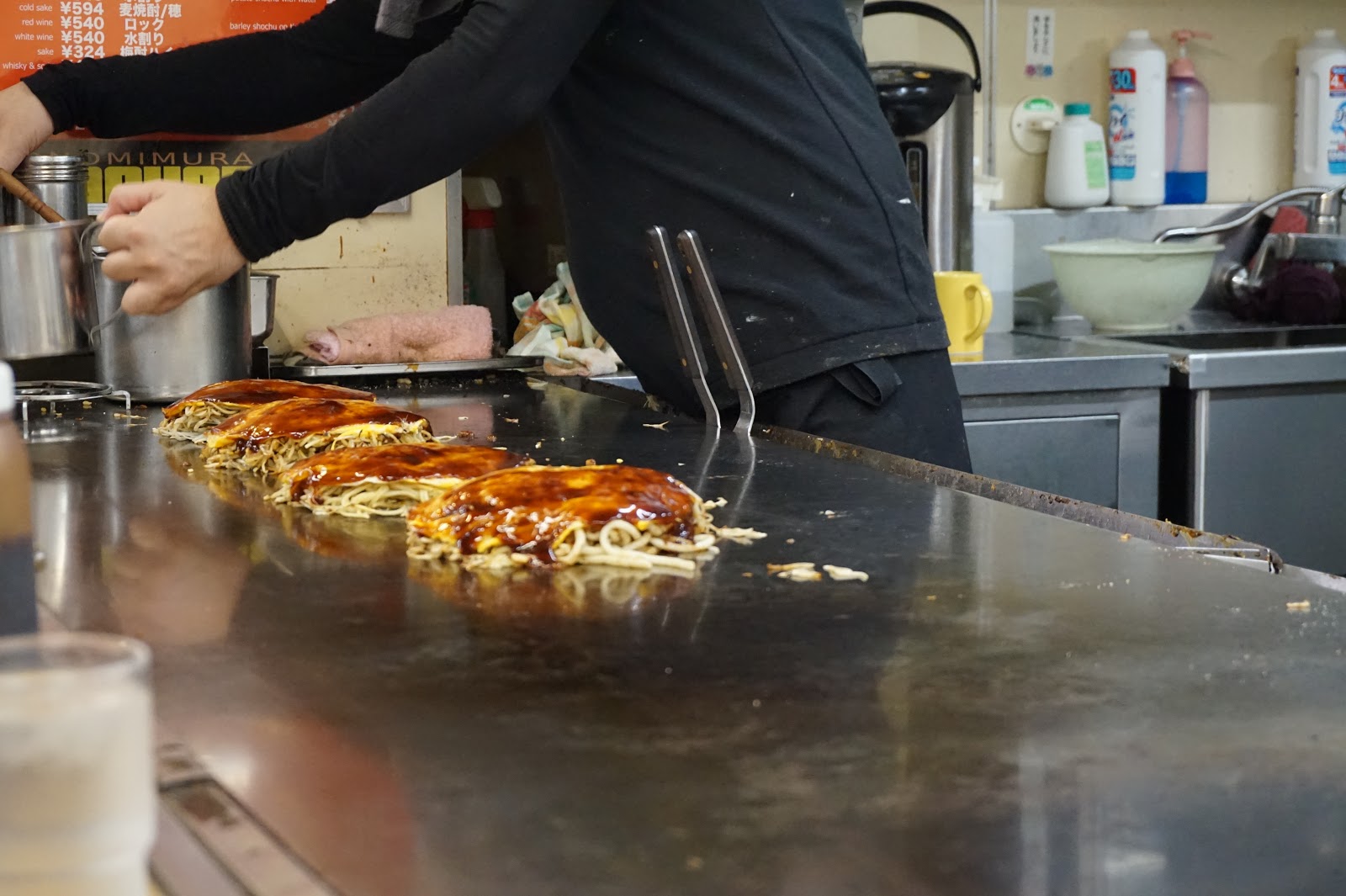 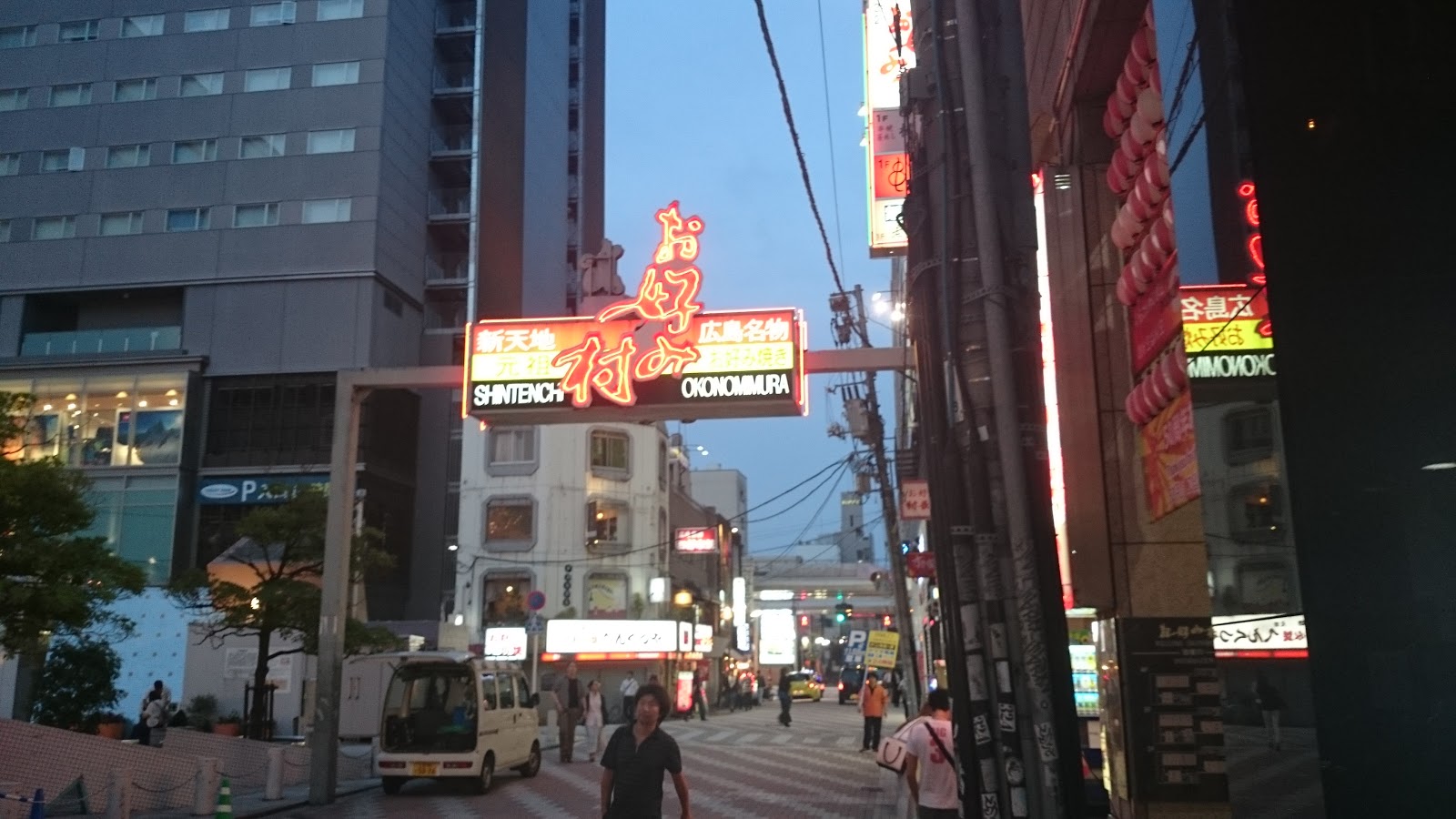 Then B found Don Quioxte, a discount chain selling a variety of goods, including food.

Most of the shops were closed when we finally exited and caught the tram back to the station and our hotel. From the window we could see the amusingly named Mazda Zoom-Zoom stadium all lit up with a crowd watching a baseball match. 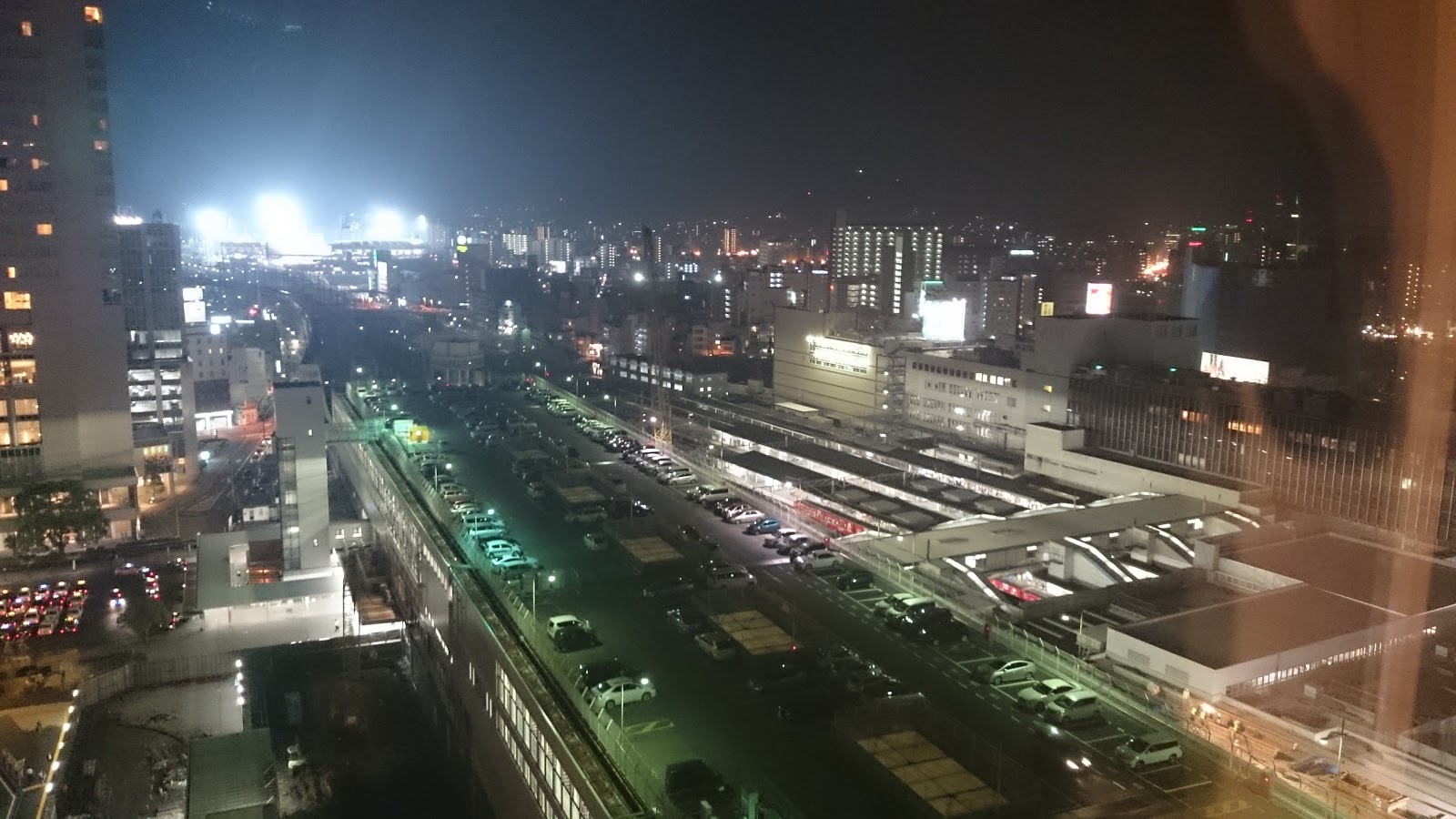 Tomorrow we go to the Mazda factory!