November 09, 2011
The overnight train was as good as it gets for travel. I awoke to farmlands covered in mist and frost, the bare branches of a coming winter visible in the pale light. Alex awoke and we sat together, watching signals whizz past, then a red sun rise into the morning sky. 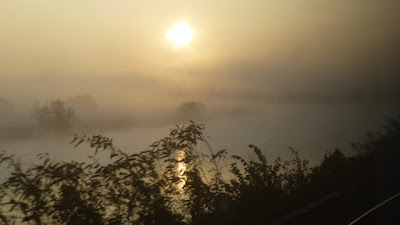 B made the mistake of climbing up to the top bunk to retrieve some clothes and made herself horribly motion sick. From that moment on she was confined to bed.
We were served a breakfast of cold meats, cheese, jam, warm rolls and croissants, fruit tea and orange juice. The yoghurt was so nice I even ate some. There was a little tub of tartare sauce and Alex was given a chocolate milk drink, to his great delight. The scenery as we raced down the Elbe river valley was stunning. Old German houses and castles built on rock outcrops. Then before we knew it we were in the Czech republic. What a perfect breakfast! 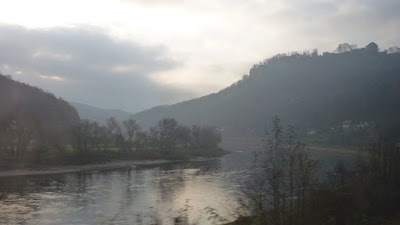 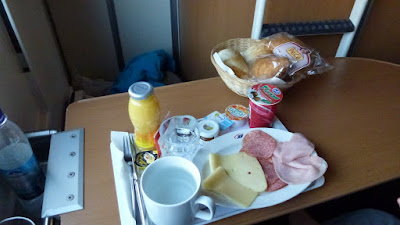 As we moved away from the river we passed a field of solar panels, followed by a coal fired power station.
We had arranged a driver to pick us up at Prague station through our hotel. The drive to the hotel took us past many landmarks, Wenceslas Square, the Dancing Building and more. Prague was big and grey, old and new trams rattling through the streets past old churches and chain stores from across Europe. 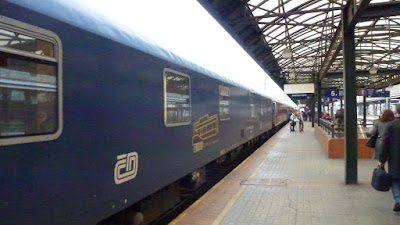 At the hotel, the Aparthotel 5, we were greeted by the irrepressible redheaded Kristina. She pointed out the well stocked toy corner to Alex and after we had dropped off our bags, fed us a welcome drink and went through an itinerary of sights on the map. We felt guilty that our stay here is so short. We would definitely return here. The room has cooking facilities and the toilet even has one of those embedded seashell seats! 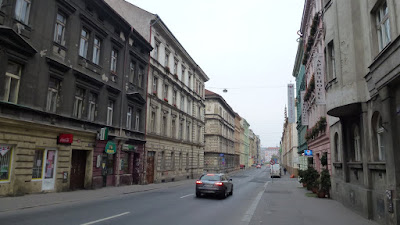 After picking up some supplies at a nearby shopping centre we followed the river towards the Charles Bridge and old town. Along the way we stopped by an island dedicated to children's activities, complete with a big playground. Alex was delighted! 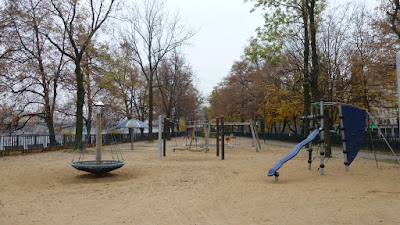 We passed an art gallery where big black faceless baby statues read books about the exhibitions inside. There was lovely autumn folliage along the way and beautiful sights across the river. 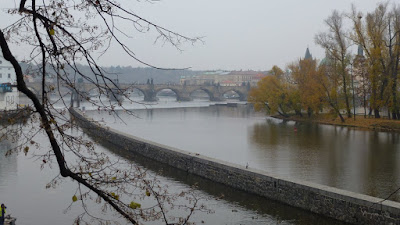 Charles Bridge was tourist central, but fun to cross nonetheless. We followed our fellow tourists into Stare Mesto, the old town and the central square overlooked by the Astronomical Clock, a tall tower with a clock and figures that perform on the hour. Thankfully we arrived just in time. Atop the tour a red and yellow attired trumpeter sounds his instrument as well. 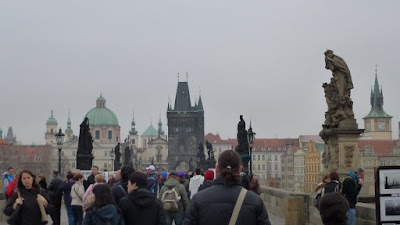 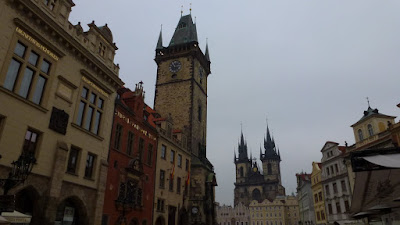 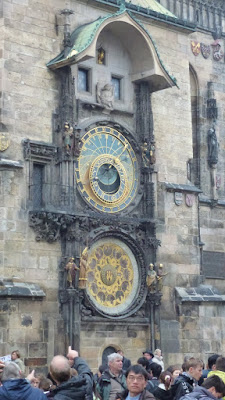 We ate a very late lunch of hot dogs and potato chips from stalls in the square, then began a wander back towards the hotel. Alex fell asleep on my shoulders and the sky was darkening. After a few confused missteps we found ourselves at the shopping streets around Mustek and the road leading  to Wenceslas Square. Too tired to continue, we caught the metro back to Andel. 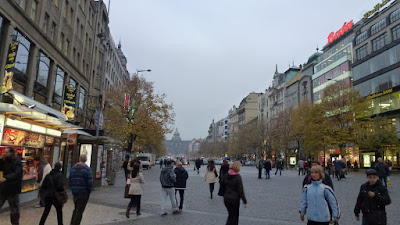 There we walked to the big shopping centre, a modern clone of anywhere else in the world. Alex had fun playing with other kids in the children's area, while we took turns hunting for clothes for him. We were planing to use the cooking facilites to make dinner with ingredients from the huge Tesco, but we gave up when we realised it wasn't worth it for a single night.
It took us a while to find a restaurant that had seats available and got to the point of thinking we should have tried a fast food outlet. Eventually we sat down at a little pizza place and had bad pizza and pasta. It was food.
When we arrived back at the hotel Kristina had done our washing for us. How good is this place?