November 15, 2011
Here we are at the A-Train hotel in Amsterdam after a day on the trains. A long day on the trains.
We said a sad goodbye to Paris, catching a packed metro train and then a RER train up to Gare du Nord station. We were early and there was not much to do but stand around the headers and watch the trains arrive and depart under the canopy. 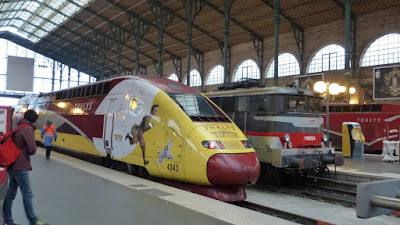 Our fast Thalys bound for Amsterdam waited next to another decorated with Tintin, in a cross-promotion with the Spielberg movie. The Thalys was very comfortable inside, bright pink and red decor, wifi (free for first class, extra cost for us) and power sockets. After days of blue skies today we left under foggy grey, racing past tenements, then cultivated fields of green dotted with small towns.
Though our tickets were for Amsterdam we had to make a stopover in Brussels to pick up some lost property. We had actually left it in Ghent, but the luggage staff kindly shipped it straight down for us and look after our big bags as well. Not having seen outside of Brussels Midi train station before, while we waited we caught a train to Bourse, the closest stop the Grand Place. The tram stop was underground, next to the regular metro. 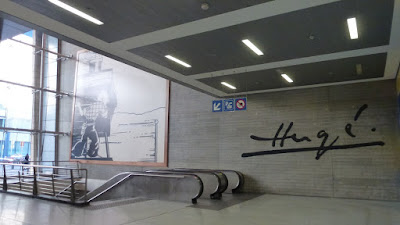 Belgium has some stunning architecture, and that includes the aptly named Grand Place. Such ornate buildings! 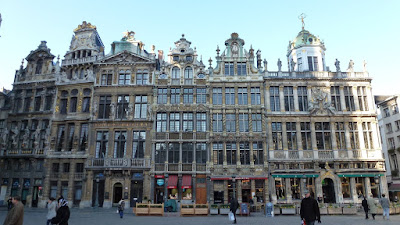 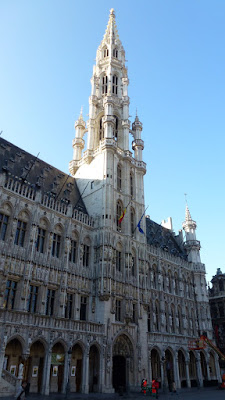 We made a quick stop for waffles and souvenir clothes, then had to walk down to the famous, but unimpressive, Mannekin Piss. Well, fountains are one of Alex's favourite things. 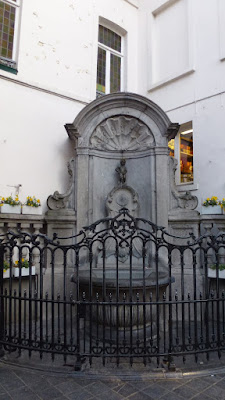 It was quite a walk back to the train station, where our lost bag and luggage awaited us. We now had to make our way to Amsterdam. Rather than spend money on another Thalys we decided to catch a regular intercity train, taking advantage of our underutilised Eurail Select passes. We quickly ate a uninteresting lunch at a cafe and went to board the train. Unfortunately, the trains weren't cooperating. Amsterdam trains leave hourly and our planned train had been cancelled!
We waited the hour then jumped on board the first class carriage to Amsterdam. It was clean, fairly empty and there were power sockets, though I didn't use one. We cruised out past the outskirts of Brussels, villages and fields before making a stop at Mechelin, which was home to an impressive tower and cathedral. 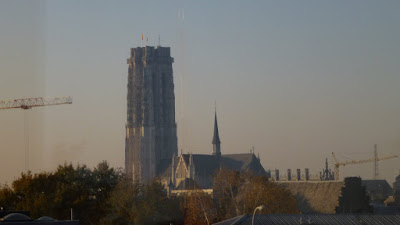 On we went with Alex watching videos or giggling with us. He was extremely well behave all day, except for when he wanted to break away from us and use a lift.
As we approached Amsterdam it seemed that we were running late. A number of stops, including Schipol, were deleted, but we still seemed to crawl. Then we stopped and the lights dimmed. Eventually an announcement was made that there was a technical fault with the train and it was being reset. It was painful, all we wanted to do was get to the hotel. 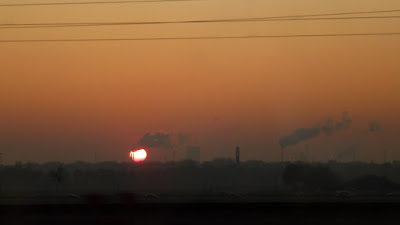 We limped into Amsterdam's Centraal station and emerged into freezing cold air. It was misty and chill outside, an ordeal especially for B and Alex.
The lobby of the A-Train hotel is decorated with all sorts of railway paraphenalia, including Australian material. When we entered our split level apartment room Alex's eyes immediately lit up. There were toys! He immediately sat down to play.
We quickly reemerged from the hotel to take a quick walk around the dark city and get some dinner. After passing an "Occupy Amsterdam" encampment we revisited the red light sector, full of marijuana and sex shops, plus a few, mostly empty, red windows. With Alex perched on my shoulders the drug pushers left us alone. He wanted to get down and feed the white swans on the canal. 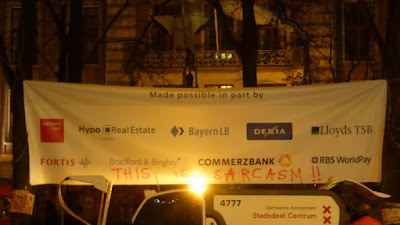 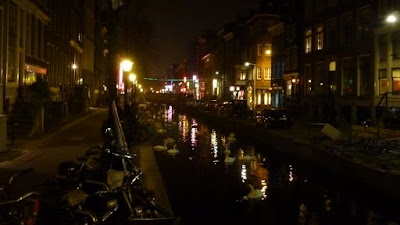 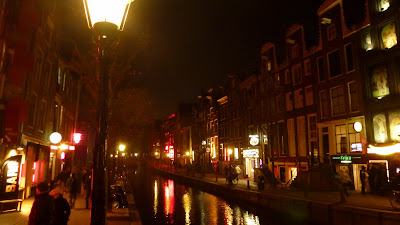 There were plenty of kebab shops and Argentinian beef restaurant, but we eventually had dinner at a pasta bar. Then a quick retreat back to the hotel.
This is a fun room for Alex. It's a pity that we aren't staying here longer. We would be, but our plans always get disrupted now.
Tomorrow we fly back to Kuala Lumpur, where hopefully we will get a few days rest before heading home.