November 06, 2011
London is one of the world's great cities. It's also congested, dingy and apparently almost nobody speaks English here without a non-English accent. Well, at least not near the city's centre. Actually, I did hear two families and both had the fairest hair you could have and then there was the erudite guy seated next to use at the cafe who talked incessently about books.
It's a pity that Alex inherited my sleeping habits rather than B's. She claimed a lack of jetlag, having slept virtually the whole night. Alex and I were up early and back to sleep again a few hours lately. So it was that we left the hotel rather late on our only day in London.
The new development around the Novotel Paddington is commercial highrise and was rather deserted on a Sunday morning. Quite attractive though, in a modern sort of way, and at least there is a small supermarket and eateries. As we walked to the station we passed long thin canal boats mored alongside the edge. Some looked abandoned, a couple were for hire and one was rather well lived in, with potted plants on the roof and wood smoke drifting up from a small chimney. 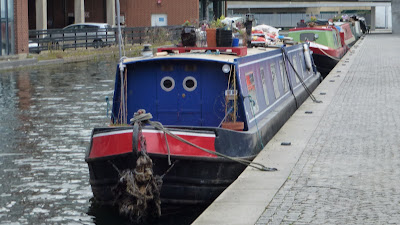 Under the classic, but rather dingy, canopies of Paddington Station the famous literary figure Paddington Bear was found. Prior to travel I found the first of Michael Bond's children's series about a small bear from Darkest Peru in K-mart for $5, so Alex was familiar with the name of the location. While his parents ordered a bacon and egg roll from a kiosk for breakfast Alex demanded an apple - he puts us to shame. It was a very nice apple too! 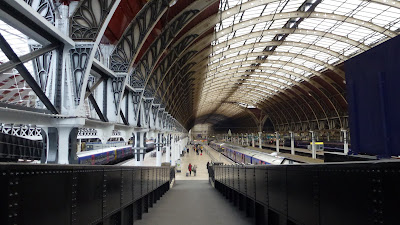 A couple of underground rides took us to Tottenham Circus, from where we walked to our first destination, the British Museum. I had visited there alone on my trip to London in 2009 and just had to share this great museum with B, despite it obviously being too old for Alex.
This is a museum of classical history to beat all other museums. The unexpectedly grand Assyrian statues and amazingly tiny cuneiform writing on Babylonian artifacts. The Etruscan  jewellry and mosaics. Greek pottery and statues missing arms and heads. Roman glasswork and everything else. But what everyone comes for is really Egypt. This is the home of the famous Rosetta stone that allowed the decoding of Egyptian hieroglyphs. There are big Egyptian statues and stoneworks. Really though, what the visitors are looking for are the mummies. 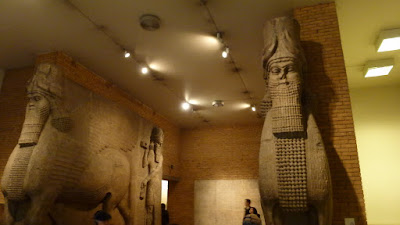 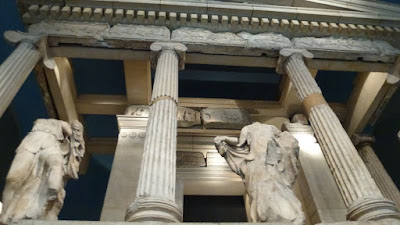 There are big mummies, little mummies and animal mummies. Opened sarcophigi with bandaged bodies inside, others closed with the painted or carved likeness staring out. The range is astounding, there is much more than the classical Tutankhamen image that we are all familiar with. 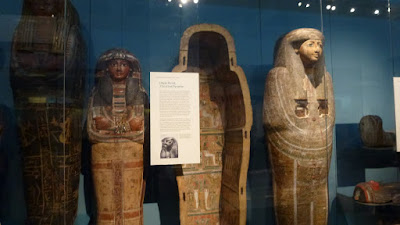 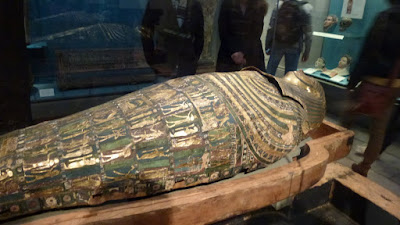 Naturally, all Alex wanted to do was catch a lift and drink orange juice. He did say thank you for doing both.
Our lunch was pasties at the Cornish Bakehouse and the little one was hungry. Our bodies don't know what time to eat now.
We walked along Oxford Road towards Oxford Circus, stopping only a couple of times to shop. It brought back memories of my Plone tutorials in a small rented office alongside the road, which is busy with tourists and shoppers. At the Oxford Circus underground we stopped to let Alex listen to the Salvation Army band playing. 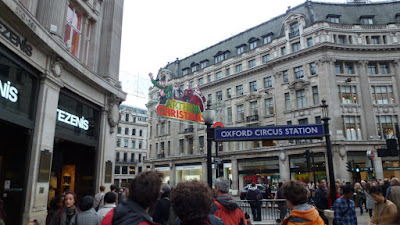 "Can I have an instrument too?" he asked. 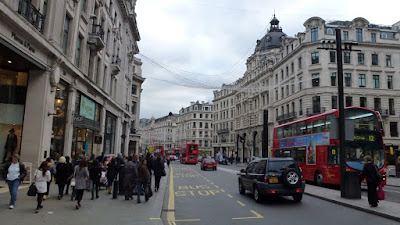 Our next destination was along curving Regent Street, a canyon of shops. Famous Hamley's toy shop, a busy place with staff loudly spruiking toys and five levels of stuff for kids. Alex was fascinated by the remote control cars, then the Thomas the Tank Engine train display. Most of all he loved the tubs of water containing motorised toys.
How could we not buy some gifts for him, despite the prices?
After an age (and a lift ride) we dragged him out and continued down Regent Street. Unfortunately, the branch of Habitat, a homewares shop, seemed to have disappeared, as I wanted to take B there.
My plan had originally been to take them to the grand Natural History Museum to show Alex the dinosaurs and then show B the Victoria and Albert. There just wasn't the time. It wasn't even four pm and the sky was getting dark.
So instead we walked down to The Mall past the Duke of York statue, to Trafalgar Square and then down to the Thames. Alex, asleep on my shoulder, woke to see the London Eye lit up in blue as we crossed the Hungerford bridge.
"Can I catch that ferris wheel?" he asked. 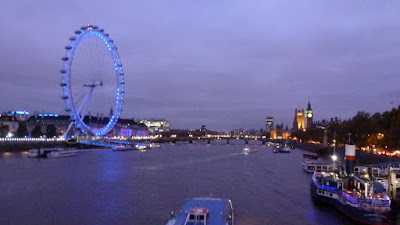 Instead of that expensive option B and him took a ride on the horses of a brightly lit carousel running by the south of the bridge. He loved it! 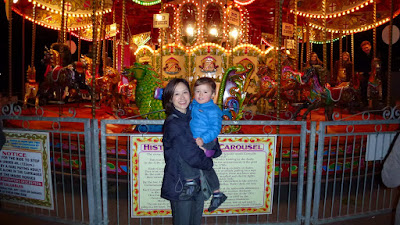 How could we not take him to see the iconic image of London: Big Ben? It's a lovely view at night, a change from the daylight walks we have done previously. But it was also cold and windy. Alex and the rest of us were glad when we finally reached the sanctuary of Embankment station for the underground ride back to Paddington. 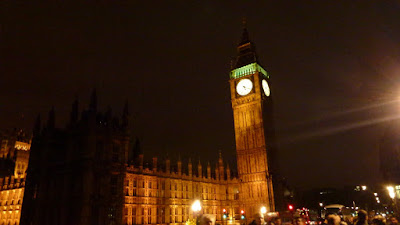 Dinner was in a little cafe near the station, eating delicious lamb shank and beef and ale pie. They had no milkshake, which is what Alex wanted, so we bought him a fresh orange juice, importantly, with a straw.
"Can I have an orange juice machine at home?" he asked sweetly.
A cold walk back to the hotel, where again there were fireworks in the distance, frightening Alex. We just made it to Sainsbury's in time to purchase a couple of items before retreating to the warmth of the hotel.
Off to Belgium today.