Breakwaters, beaches and the Big Banana 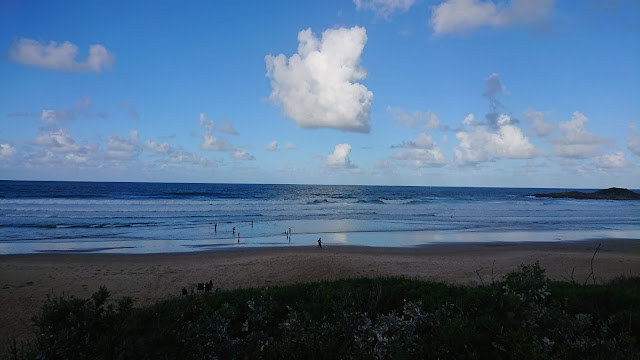 Sleeping in. What is it? Does it exist? I'm no longer certain any more.

Anybody for hot cross buns (microwaved, of course)?

So we drive down to the marina, which is already busy with swimmers and runners, walkers and posers. I guess we are among the second pair as we stroll out on to the long wooden jetty, snapping photos as we go. 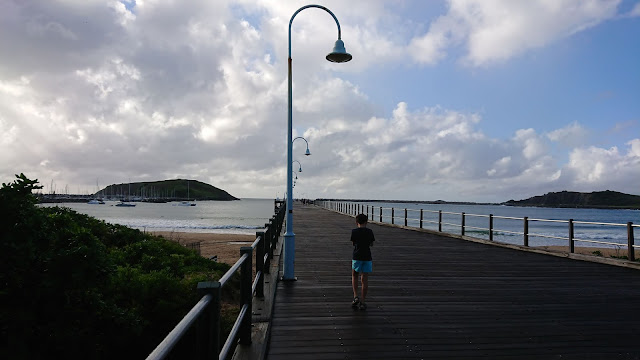 A couple of fisherman throw lines out. Do they catch anything, or is that just bait on the hook? I don't know.

Others swim in the rolling waves, under a warm autumn sun. As with yesterday, massive clumps of cloud are rolling in, threatening rain. A heavy downpour woke us up in the middle of last night.

It's peaceful on the jetty, the gentle swoosh of the waves, the breeze rustling our hair.

On the unprotected side of the breakwater the waves are heavier, spray launching itself over the rock barrier. Our stomachs are desperately calling for breakfast. Salvation comes in the form of a small burger bar opposite the yet to open fish market. 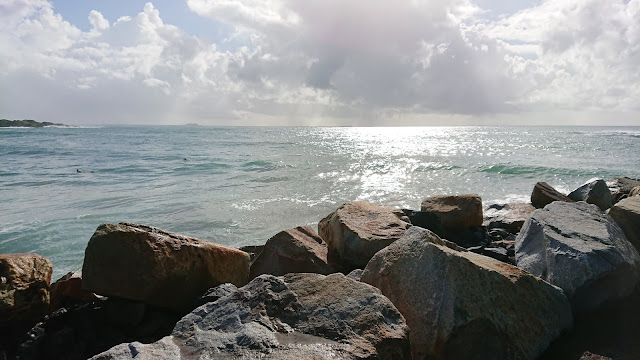 After a burger brunch we have enough energy to continue along the breakwater towards Solitary Island. We feel we are racing the dark grey cloud mass approaching with a curtain of rain.

The path up the bare island hillock, it's sides pockmarked with mutton bird burrows, is very steep. At the top is a lookout with views out to sea, across the town and beyond to the mountains, south past the airport. It's beautiful and well worth the effort of the climb. 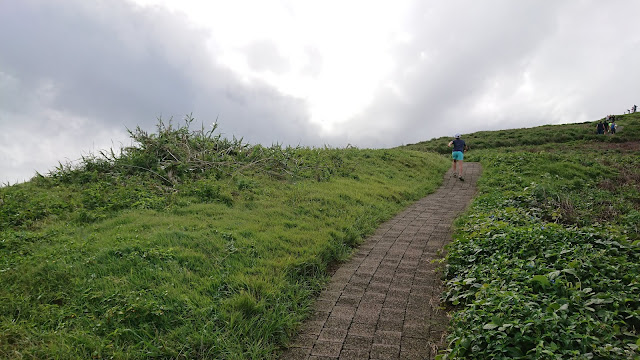 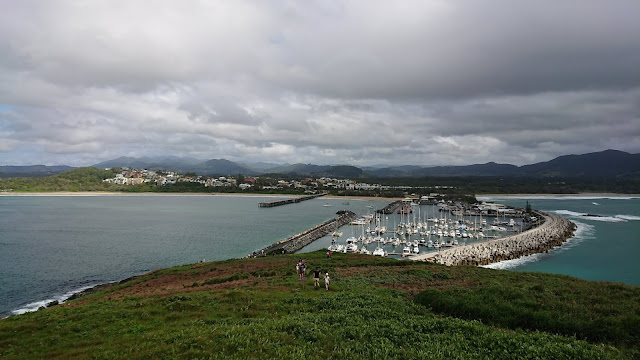 The sun still shimmers off patches of sea, but already we can feel the spit of rain drops. As we return hurriedly down the slope the rain increases. There is a shelter at the base where we wait until the shower lessens.

This time we walk back along the marina boardwalk behind the breakwater. In the calm waters below we spot many species of fish gliding past, a stingray and a shy octopus returning to its rock hideout.

B and I want to visit the dolphin conservation centre, but Alex only wants the Big Banana fun park. We acquiesce.

The Big Banana is Coffs Harbour's best known sight. On my sole previous visit to Coffs more than thirty years ago it was just a big banana statue outside of a banana farm, or at least that's how I remember it.

Now there are a variety of attractions, including a water park, toboggan sled ride, giant slide, ice skating rink and more.

The car park is already crowded when we arrive. Initially we begin lining up at the main ticket office, we realise that our desire is limited to B and Alex on the toboggan and Alex at the water park and that there's no discount to be had.

The queue at the toboggan is incredibly long, almost an hour. And when they finally get their ride it is done at a crawl due to the overly cautious lady and child ahead of them, spoiling all the fun.

It was yesterday's traffic jam all over again.

B on sells her ticket to the next ride, unwilling to suffer the queue again.

There are pauses too, as a couple of showers shut the ride down temporarily.

There is only 45 minutes left in the current session at the water park, but the attendant sells us the ticket for half price and we figure that's all we can stand waiting for Alex.

Over and over again on the same open slide, not the Super fast one, not the tunnel or the inflatable ride. But he enjoys it, and that is all that matters. 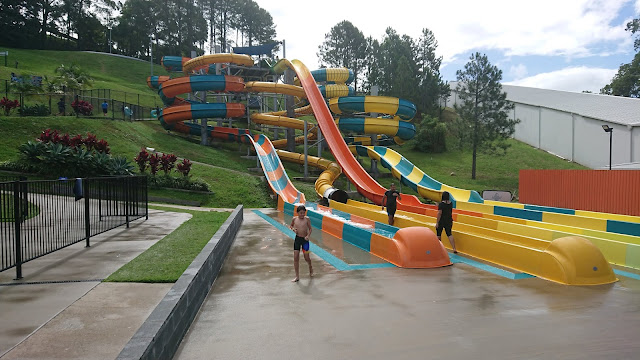 Before we leave, we need to get photos at the Big Banana itself. 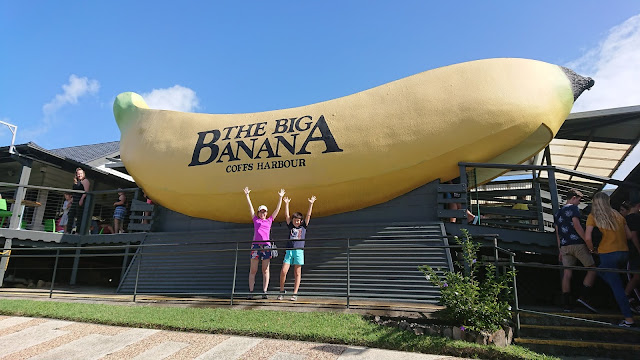 Then we are free!

I want to get Alex some craft materials to amuse him in the hotel evenings. We cross the busy Pacific Highway to the Park Beach Shopping Plaza and end up eating lunch at the Chinese run Shinobi Sushi. It wasn't great, but Alex ends up costing us a lost as he keeps eating more and more sushi.

Further along is Park Beach itself. The scattered cloud and golden afternoon light shimmers off the flat expanse of wet sand. In the background is the constant pulsating roar of crashing waves. 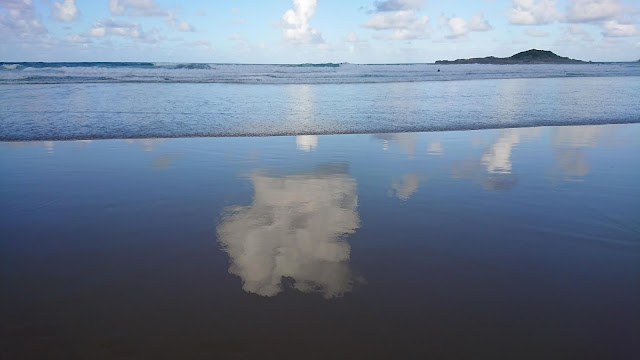 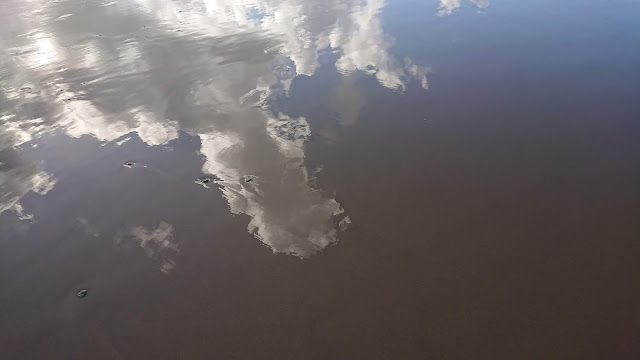 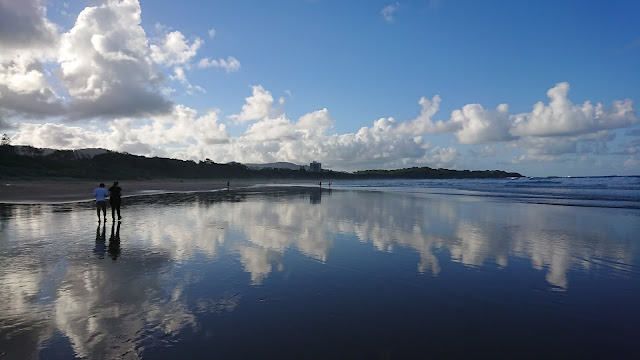 It's beautiful out here. This is more my kind of thing than theme parks.

Scattered stones are polished flat, perfect for skimming of only the ocean will behave. A Virgin Australia 737-800 roars overhead on descent into Coffs Harbour airport. I almost wish that we'd flown here. The view from above would be great.

Eventually we walk back to the car, take a drive into the city centre. It's too early for dinner, but most of the shops are closed. K-mart is still open in the attractive shopping centre.

We buy Alex a very cheap art pack. Something to do in the evening.

Food has been expensive so far and we are tired. So we buy microwave dinners from Woolies to heat up back at the motel, microwaves being the sole cooking tool available.

It feels wrong not to have a seafood meal at this fishing town, but I suspect everyone else is fished out this Easter.

Perhaps tomorrow, as we head up the coast.