A not so Good Friday drive to Coffs Harbour 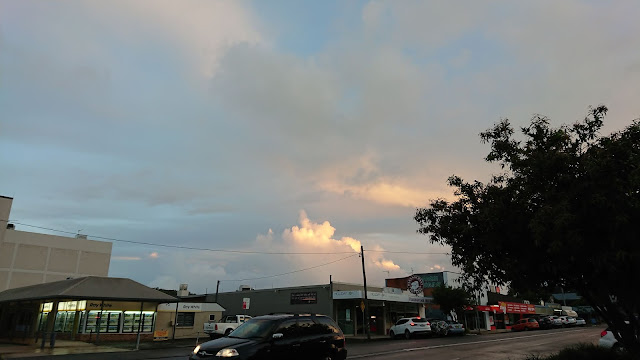 Note to self: Don't drive out of Sydney on Good Friday. Especially if you are heading north.

It all started yesterday. After a day of me at work, and Alex building Lego Mindstorm robots nearby, we arrived home in the afternoon to take Kita to boarding. Normally that would be a 15 minute drive. Felt like it took at least three times that in the traffic. Almost as bad heading home.

We left the house earlier than usual this morning, before 8. The traffic was okay until the northern suburbs Sydney and barely let up until after the turnoff to Port Stephens.

There were times we were crawling along at under ten kilometres per hour!

It took us six hours to reach our late lunch stop of Port Macquarie. There was a general hangriness inside the car by that stage. This was resolved by a great meal at Chop 'n Chill, but we had no chance to admire the pretty scenery outside as the big clouds that had accompanied our drive decided to burst.

We were all rather soaked when we made it back to the car.

The cloudscapes, huge puffy cumulonimbus towering over farmland and rivers were magnificent today. I had little opportunity to admire them, for today was the longest that I have driven and the heavy traffic required strong focus.

An hour and a half later we were in Coffs Harbour.

I was glad to arrive at our motel, simple but clean. We decided to have an early dinner

Most shops and many eateries are closed on Good Friday. We found a couple of Thai restaurants open for dinner in the centre of Coffs Harbour and chose the second, busier one. The food was pretty good and the fresh veggies were better than the fast food alternatives.

It's nice to have an early night. Alex mentioned Mr Creosote in the car and to my delight Monty Python's Flying Circus was on SBS tonight.

It's been an exhausting first quarter of the year. I was still working late last night. I need a holiday.