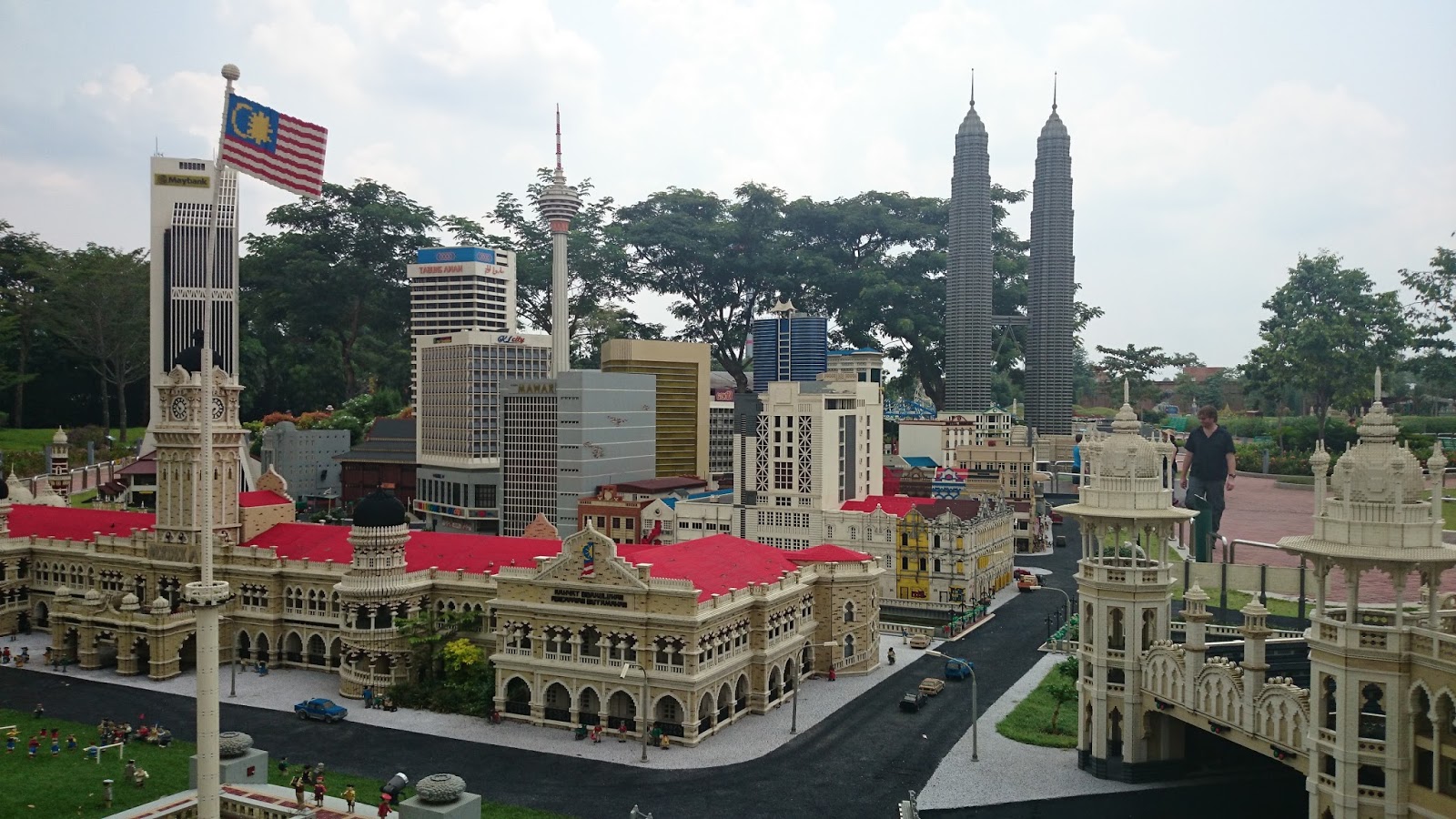 When it comes to dream jobs I suspect that professional Lego builder would be at the top of many people's list. There must be quite a few of them judging by the number and size of models around Legoland.

Another too early morning from Alex. He and I snuggled up in the bottom bunk bed (no, not a double decker sofa!) and he watched cartoons while I typed and B slept in the adult's room.

There was a panic the previous night when B couldn't find her wedding band. We searched everywhere, but to no avail. Then this morning we heard a shout from her in the bed. It had been with her the whole time, somehow stuck in her watch band. 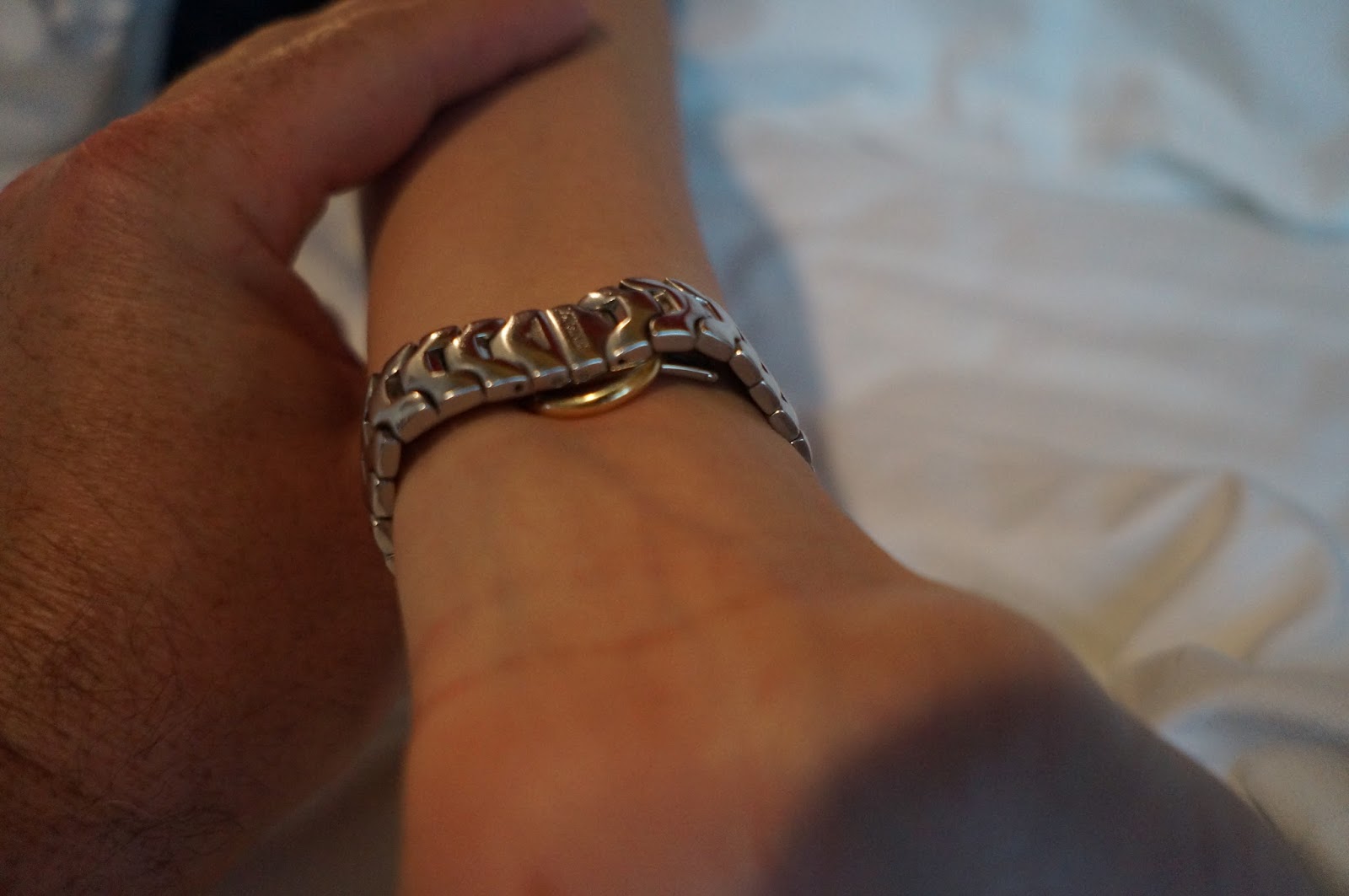 The buffet breakfast had a decent range of both western and local dishes, including roti canai and curry. We ate until we were very full, anticipating a lot of exercise and little eating inside the park. Then we checked out and left our bags with the hotel.

Emmett Brickowski, a couple of stormtroopers and some park employees were dancing at the entrance to the park, which was just opening. 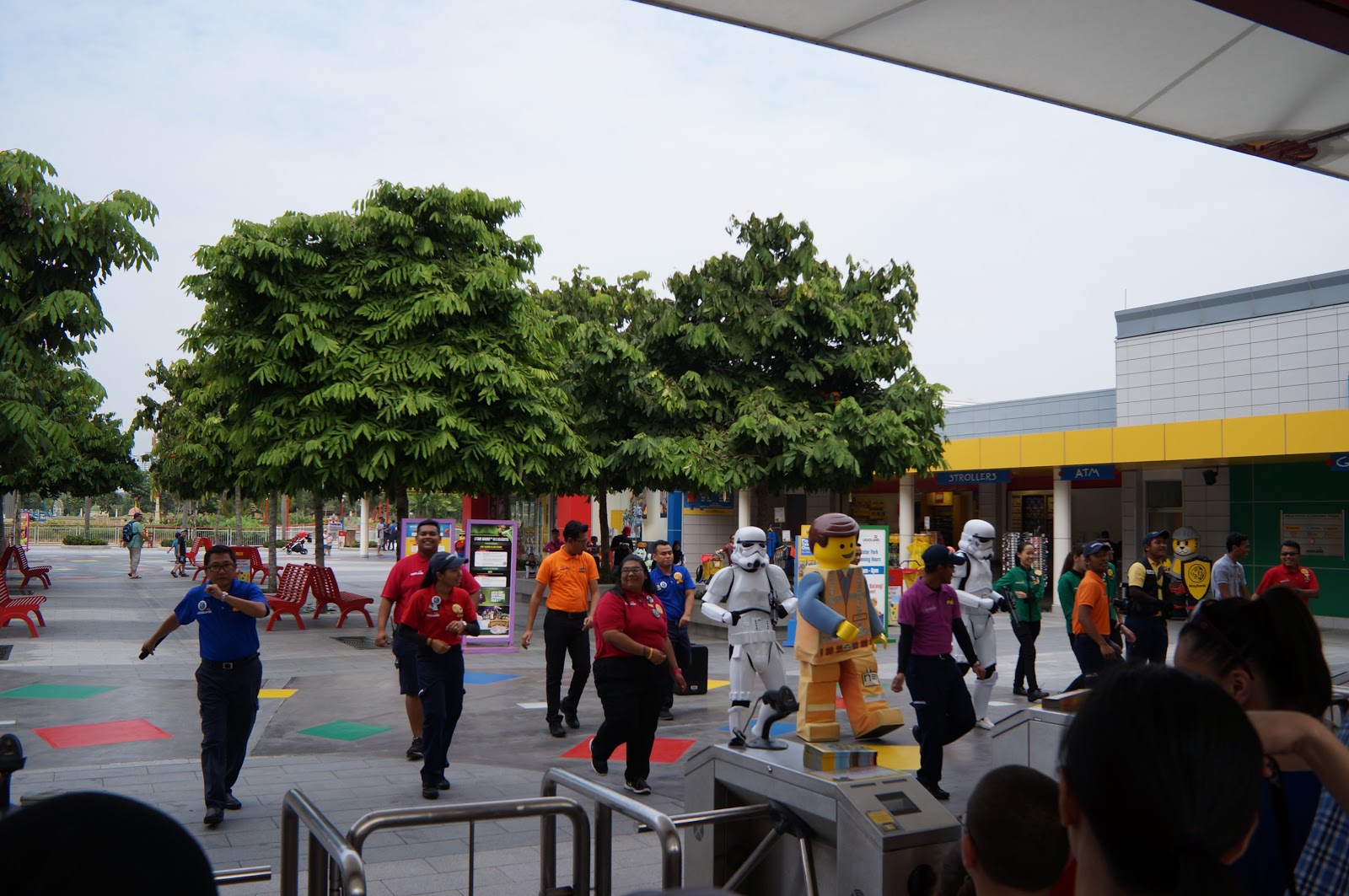 I've heard that the park can get quite crowded, but on this Friday there was virtually no wait for any ride. We walked around in a clockwise direction.

B and Alex started with he Technic Twister rollercoaster. I'm a wuss and won't go on anything with drops.

There were screams involved.

Both the hotel and park have been holding a Star Wars promotion and John Williams' music was being played everywhere. Yep, doesn't get any better than that!

Our first attraction was the Star Wars Miniland displays, which began with a very amusing short animation of Boba Fett versus Jar Jar Binks (plus everyone else). Inside various Star Wars planets were recreated in Lego in amazing detail. 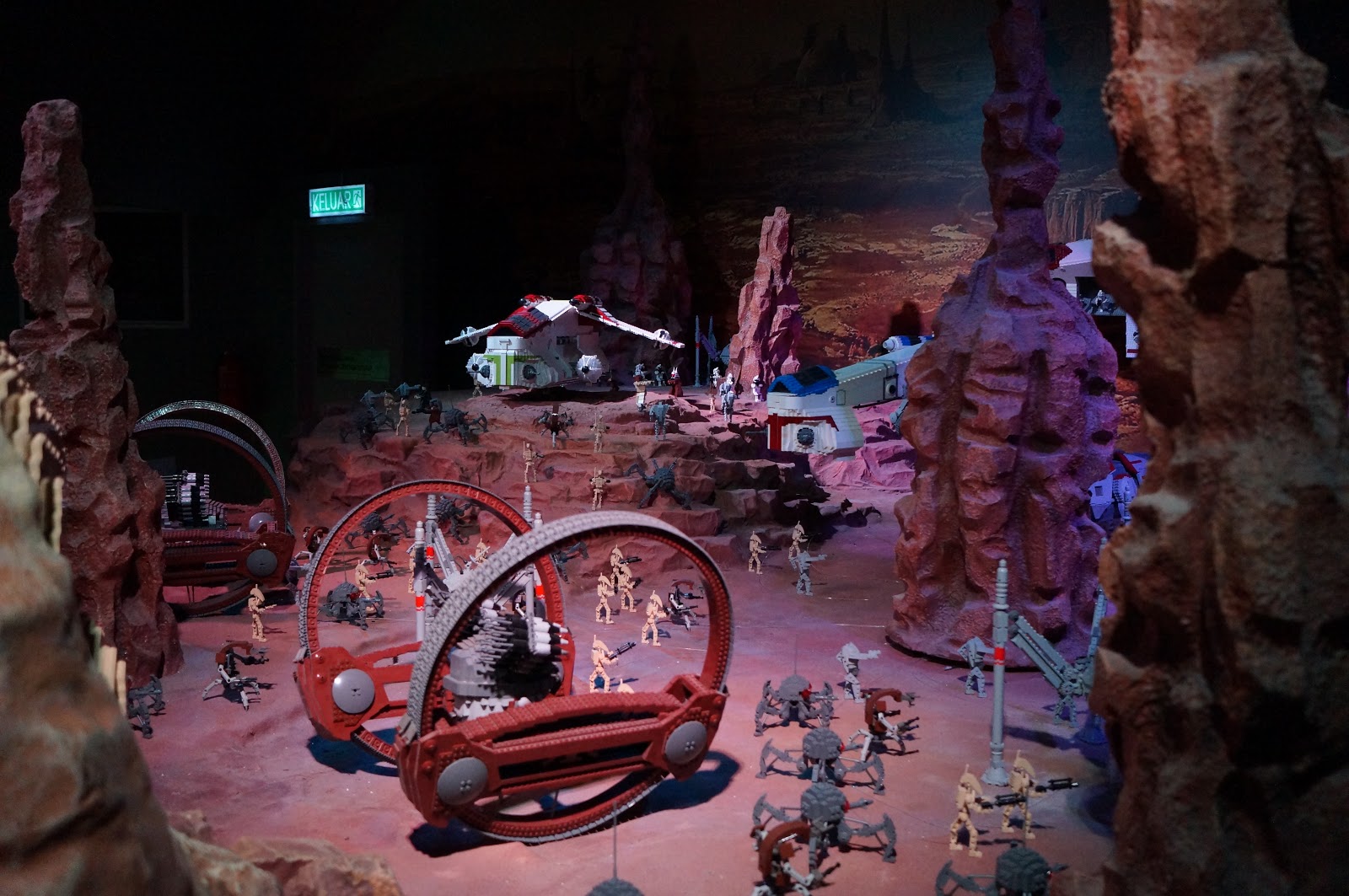 The attached Lego store was a punishment of desire.

In the Land of Adventure there were some money operated drying booths. The reason became apparent after B and Alex rode the Dino Island ride and got thoroughly soaked with the big splash at the end. Alex needed bandaids after scratching himself.

We did the pump fire engine ride, then caught the world's slowest train around the park, though there were some good views of the Lego models. Finally, Alex got his driving license at the Nissan Driving School (he's almost 6...).

By now we were starving, so we crossed over to the Asian Deli for a surprisingly good nasi lemak and assam laksa. The two meals, along with drinks and watermelon cups cost the equivalent of A$10.

We were all hot and sticky, but I had to have a look at the model buildings and cityscapes of Miniland. They were mindblowingly exquisite, especially the recreation of Kuala Lumpur. It's just a pity that many of the vehicles were not operational on the day.

It was definitely time for a soak in the water park. Alex immediately disappeared into the kids area with its slides, water cannons and giant bucket. We eventually convinced him to join us in a lazy river ride on inflated tubes with foam Lego blocks floating by. The tubes handles were generally broken and there was a lot of flipping over. I managed to scrape myself and sprain a thumb, but it was still a relaxing activity.

Disappointingly, the wave machine was under maintenance, so we moved on to the waterslides. I had to take my t-shirt off for a ride, then we climbed up again for a inflatable ride together down another slide. Fun, but quite scary.

After too many too early mornings (thanks Alex!), the heat and bright sunlight I was feeling under the weather and not like going down scary rides, which is a pity because I generally like waterslides. B and Alex tried a big funnel on another inflatable, but emerged a bit shaken.

The rest of the afternoon was spent in the kids area and on the river.

Pointing at the big storm cloud approaching we finally dragged Alex away to the change rooms, though more bandaids were required due to more scrapes.

Legoland was really fun, but also really exhausting. Faced with a bus or taxi ride across to Singapore we took the easy, not cheap, option. Two rides would be required thanks to the cross border nature of the journey.

Alex quickly fell asleep as our taxi driver into central Johor Bahru did a running commentary about the sights outside. He was quite proud of his city. The historic buildings and grimy old shopping centres, seafood restaurants, fairground and hawker stalls had a real kind of beauty in the grey and gold afternoon light as seen through car windows splattered by short tropical showers.

We had to change to a Singaporean taxi for the actual crossing. It's S$55 for anywhere in Singapore and so we decided to go straight to the hotel rather than change to an MRT at Woodlands.

The traffic was terrible and it took at least 45 minutes to pass through both immigration controls and across the Causeway linking the two countries. Fortunately there was no need to leave the taxi, with passports passed out the window for checking.

I was feeling horrible, possibly dehydrated, a massive headache and feeling like throwing up.

Eventually the paracetamol and air conditioning worked their magic and I could enjoy the slow ride through Singapore. The road through this section was lined by big tropical trees. The path through the Bukit Timah area brought back memories of my first overseas trip. We even passed by Orchard Road on our way towards the hotel.

The Amara is in Tanjong Pagar. We arrived feeling hungry again and, after dumping our bags, we walked down to the Maxwell Road food centre where we devoured hokkien noodles, "carrot cake" and chicken rice. Good stuff!

Adjacent to the hotel is a shopping centre with a lot of Japanese food. Around us are many Korean restaurants too. Not here for that, just local food. Our mission for today.