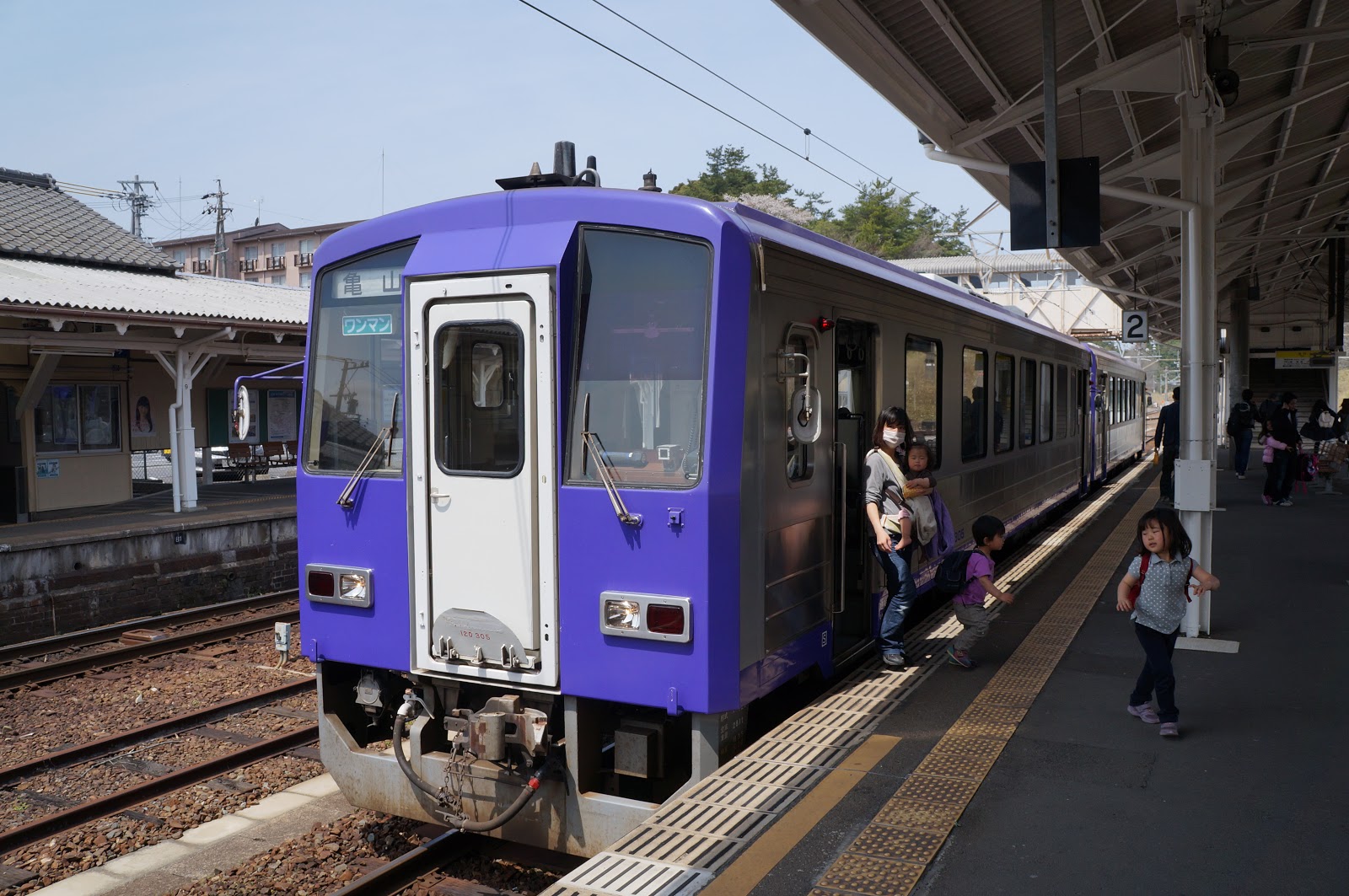 Here we were with an unexpected bonus day in Japan. Had I known earlier then whole trip would have changed. We could have gone via Matsumoto or spent longer in Kanazawa. But it was all so unexpected that nothing was planned but a little sleep in to recover from the previous day's exertions.

Mum suggested Nara and I said yes, though I was sure there were many other places I wished to see. I didn't want to go too far, for we still had to catch the train to the airport.

First we had to find somewhere for Mum's coffee fix. Lacking addictions makes life so much more flexible (okay, so I have a travel addiction and that is a big impact on life). I found somewhere new underground.

We boarded the busy rapid train direct to Nara, were early so had seats. Initially, the landscape wasn't particularly interesting. As we rattled along I gave more thought to the day. At Oji I suddenly realised that Koya-San would be a far more rewarding experience for Mum, but the doors shut before we could get out. Later checking of the timetable confirmed that it would have been a long trip. 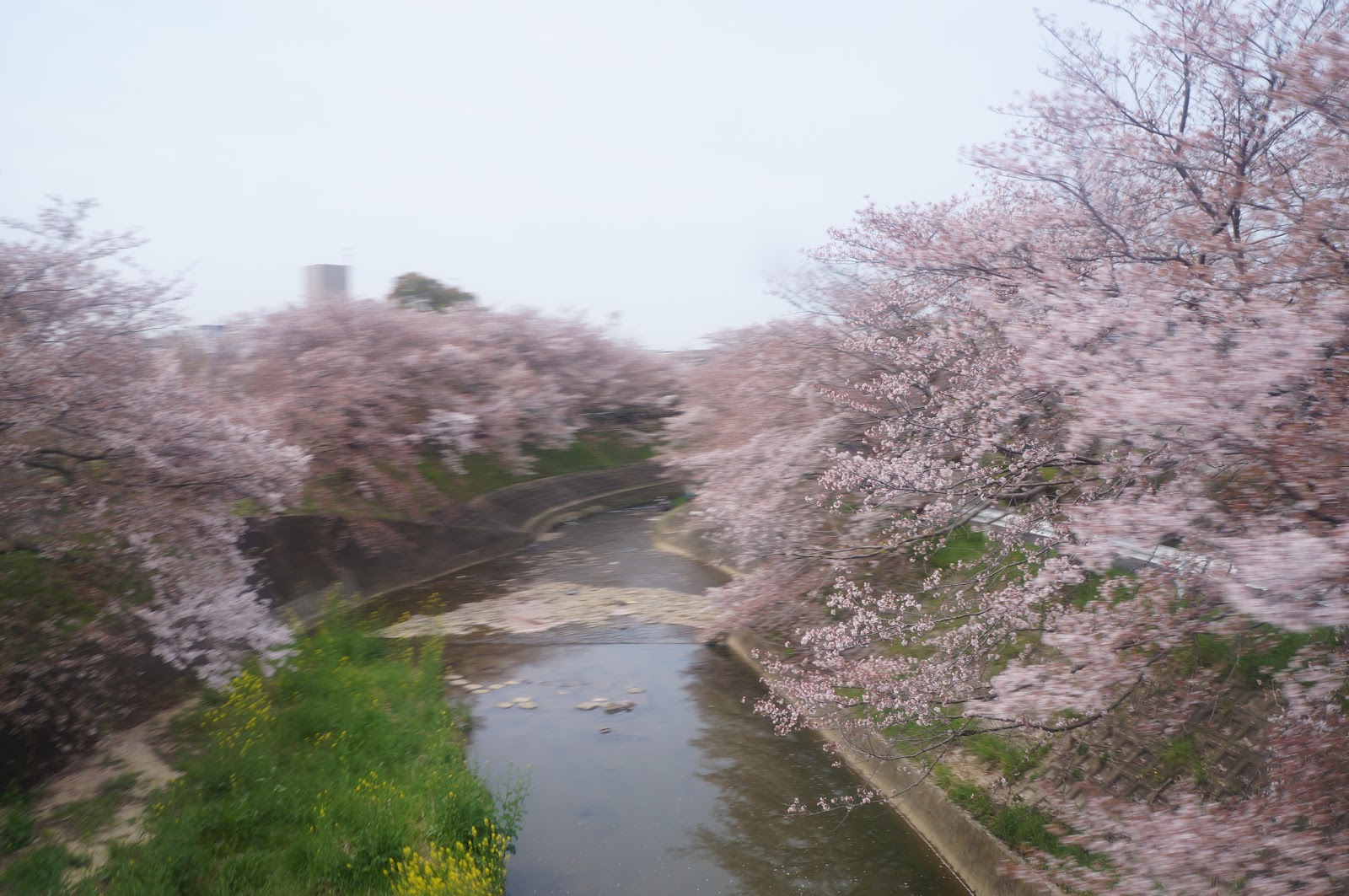 I realised, and I think Mum did too, that perhaps we were tired of temples and shrines. Once they were removed there was only the bowing deer and I would rather keep that for Alex.

There was something else I wanted to do, a little selfishly. I had previously bought a model KiHa 120 rail car decorated with the Kansai Main Line, but never caught that train along there. In fact, the only section of the Kansai Main Line, which really isn't a main line, having no through trains, was between Osaka and Nara.

There wasn't enough time to do the line in full, but I worked out a way to at least get a flavour of it, and see another new line as well. That's the benefit of mobile internet and the Hyperdia app, you can make it up as you go along.

We passed through Nara then continued a few stations on to Kamo where the electrified section comes to an end. There was our blue and silver KiHA 120 two car diesel electric set waiting for us. The train was crowded and we had to stand at the end, soon joined by a couple of families with young kids. I didn't mind, I wanted to take pictures out the end anyway. 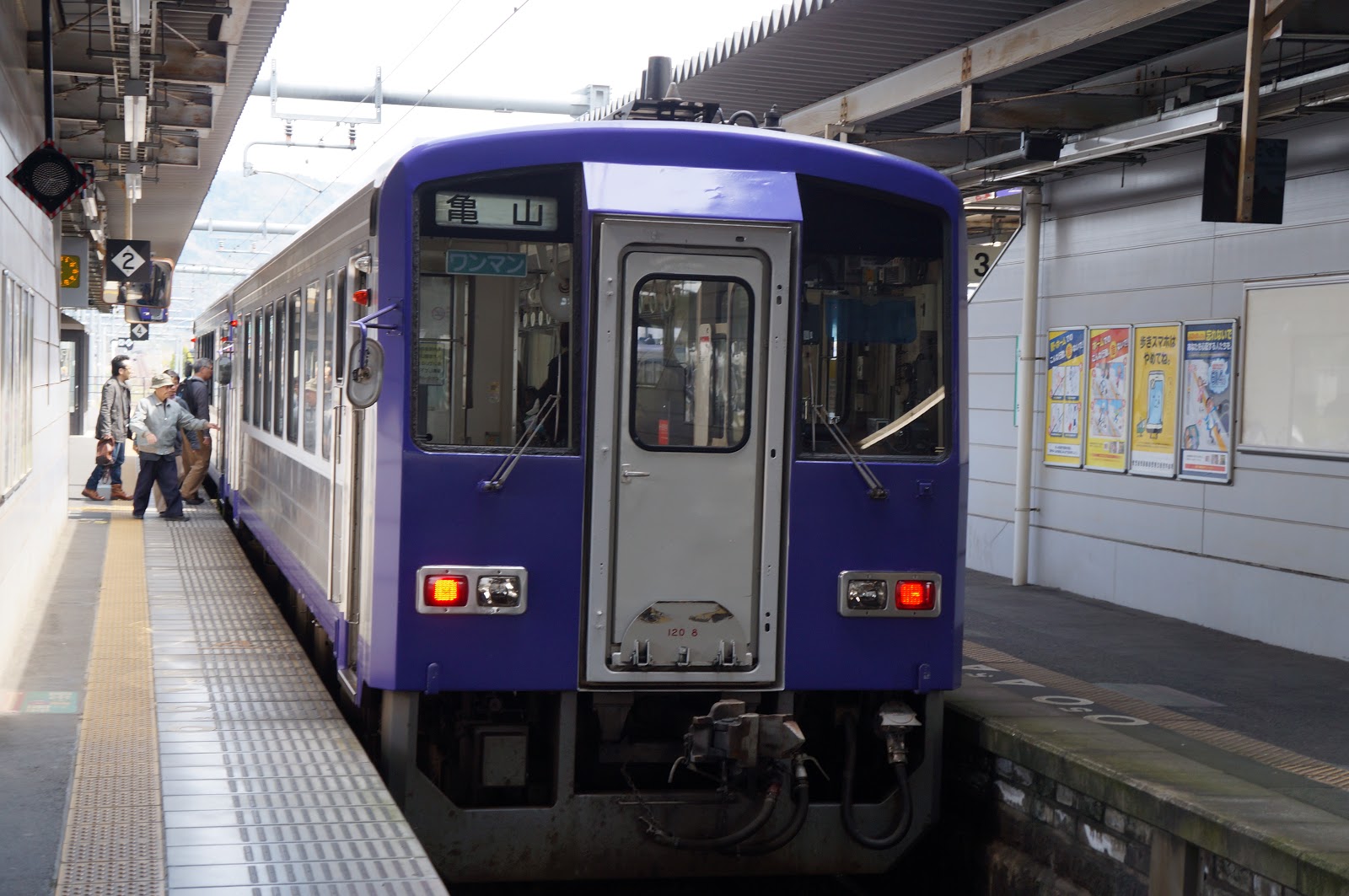 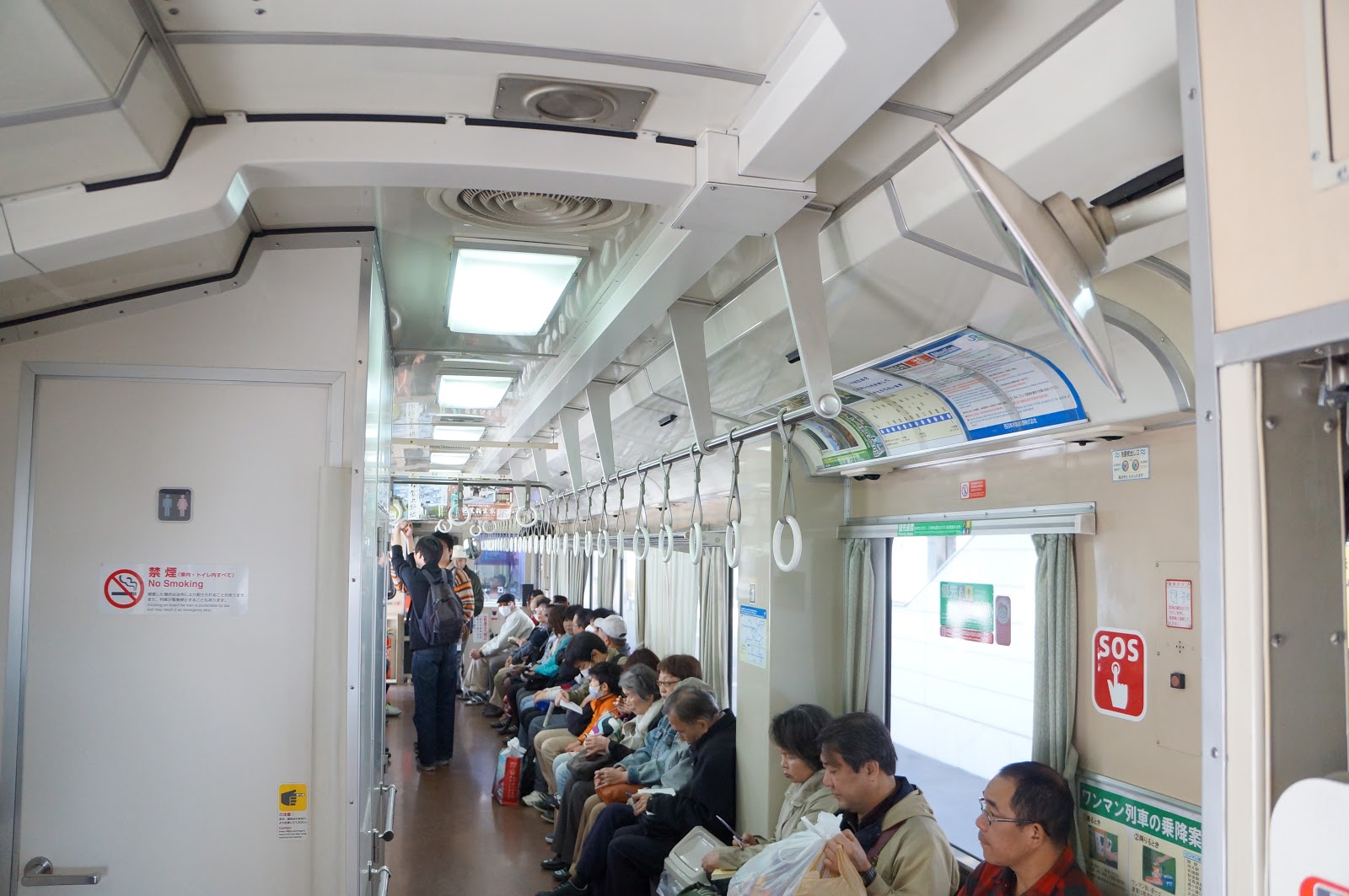 As we rattled off I thought to myself that this was how I loved to travel, indeed how happy I was now. The scenery quickly become more interesting as we chugged alongside a river, into the mountains and past small towns. The conductor came down later to give the kids some railway stickers and I had to smile with the remembrance of Alex being the recipient of similar gifts. 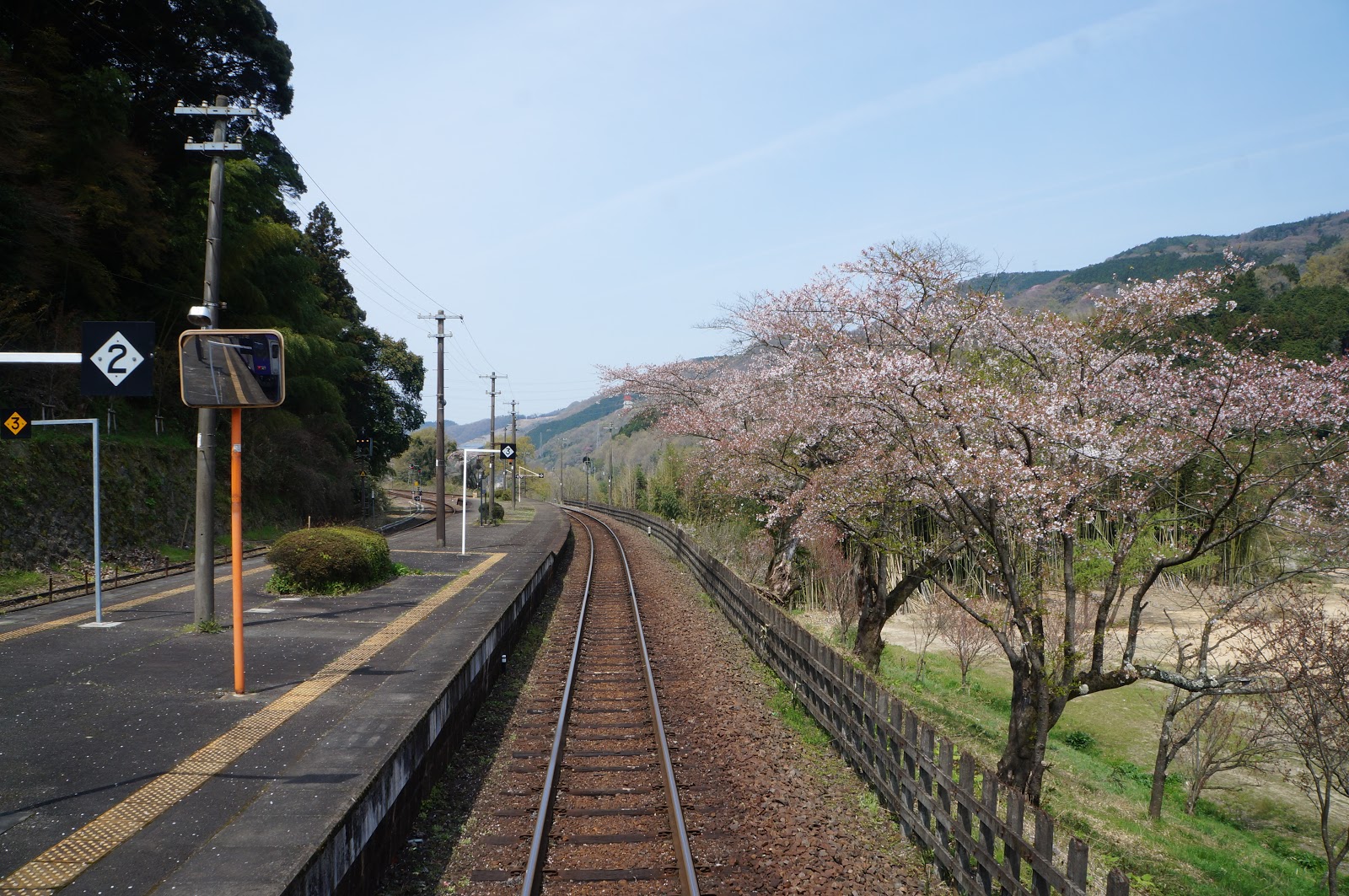 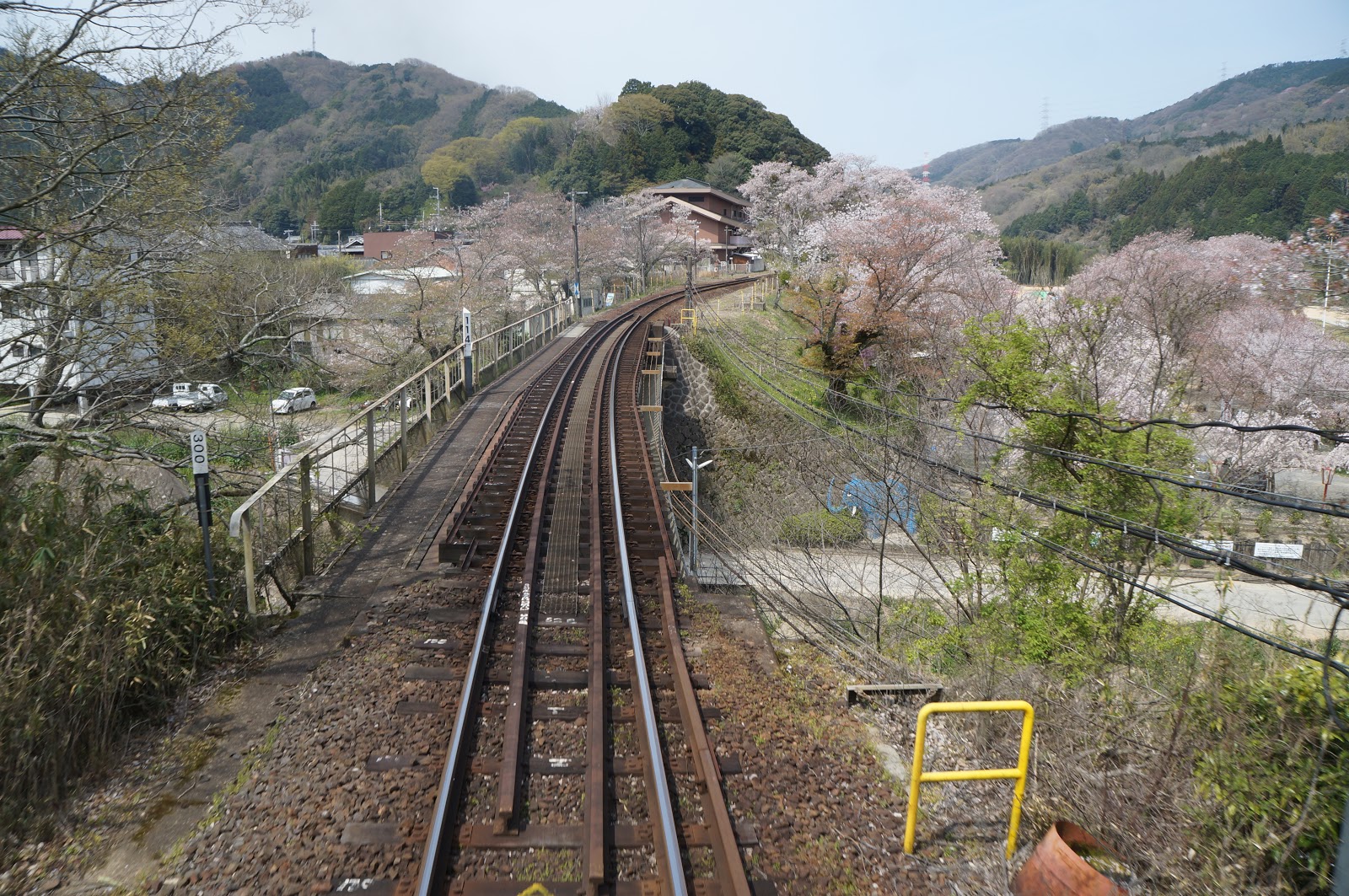 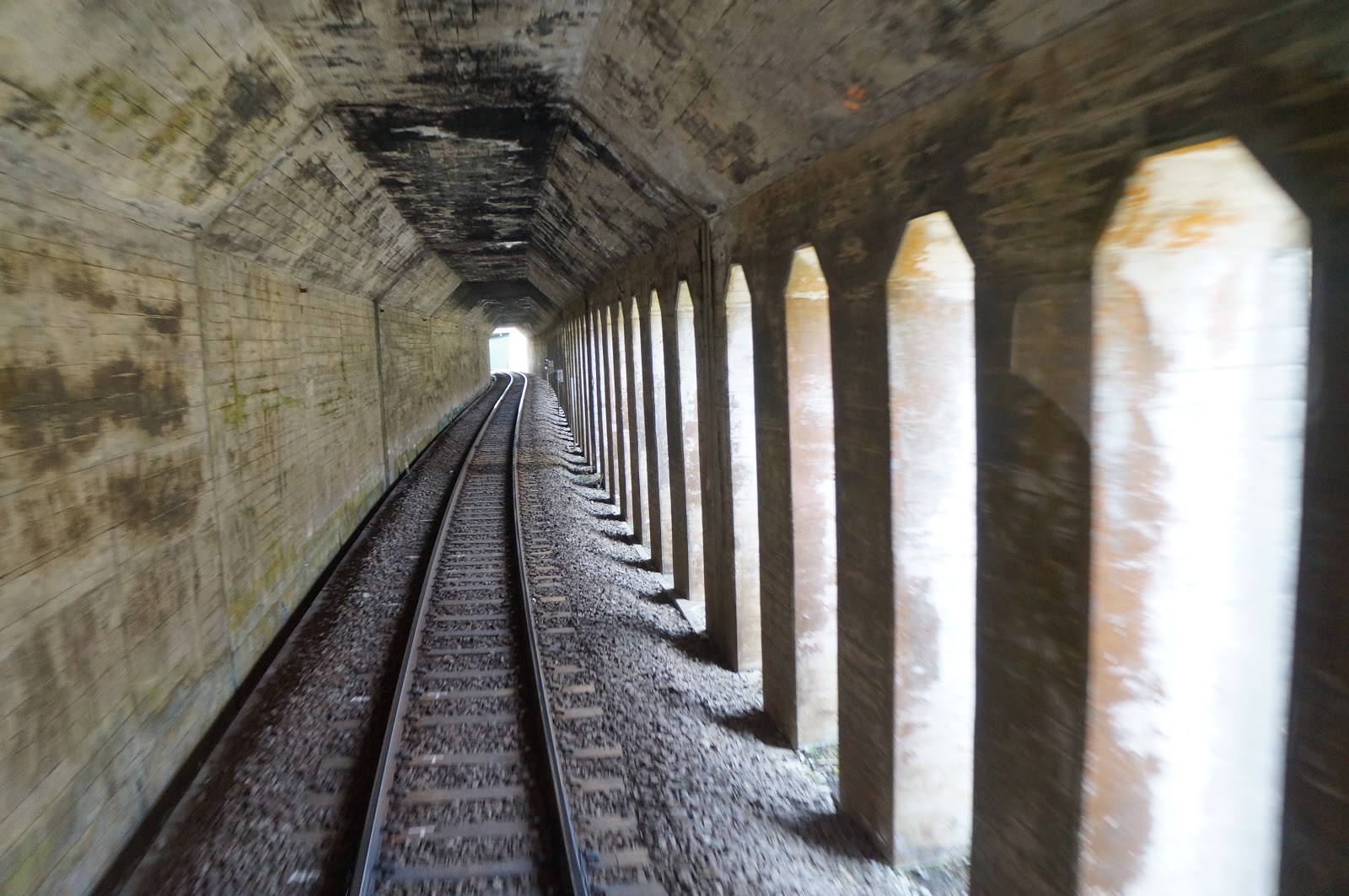 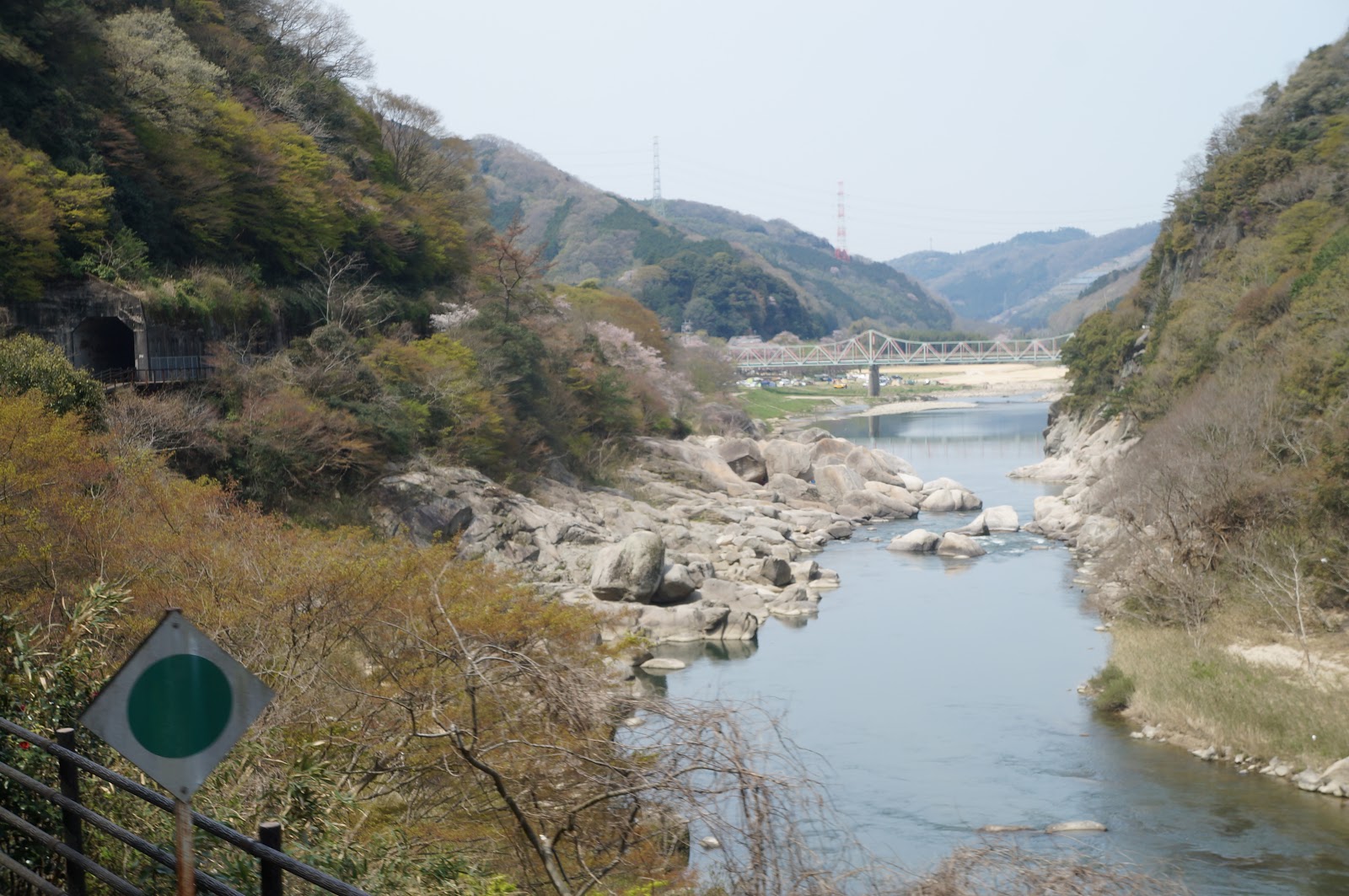 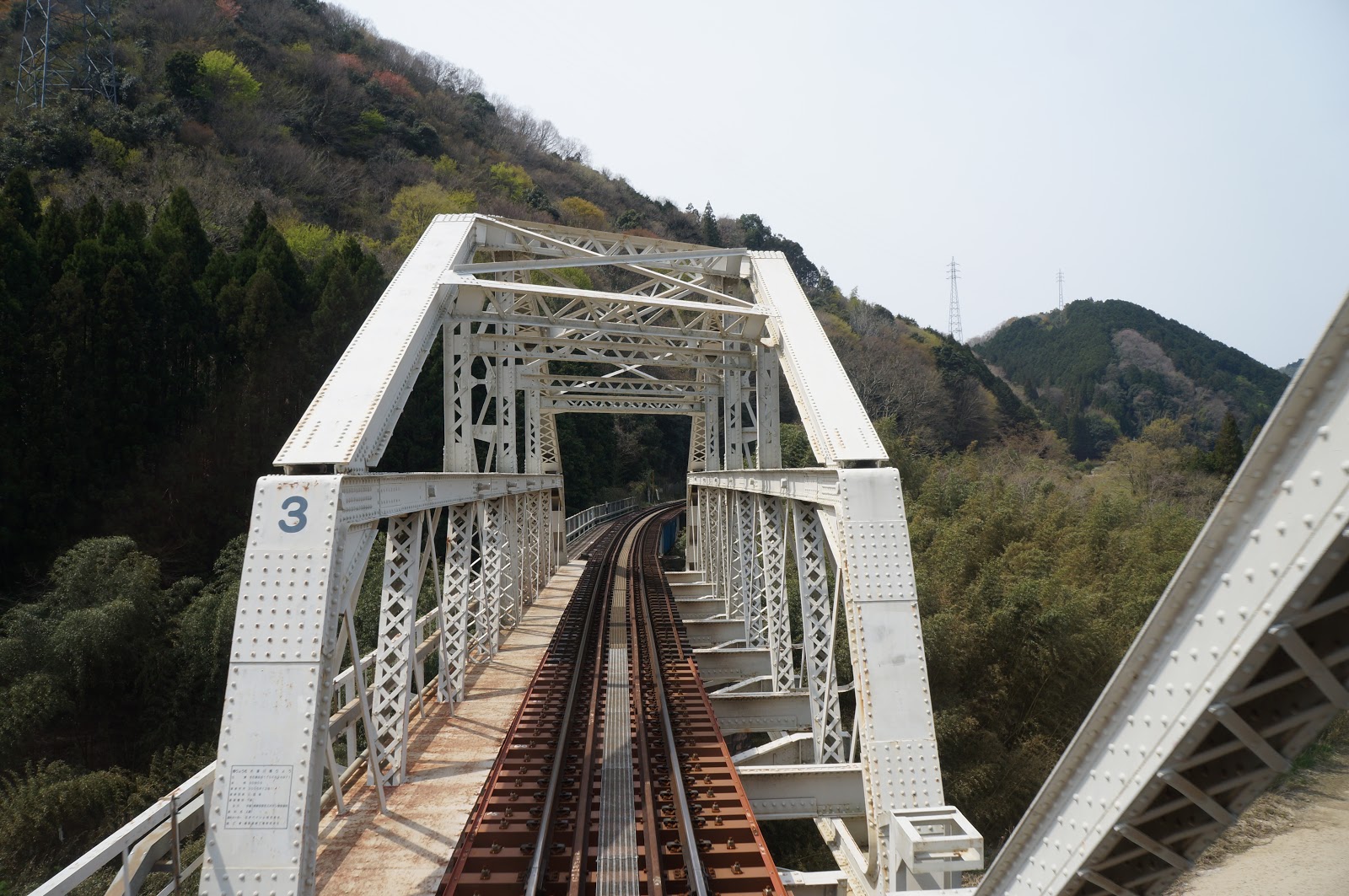 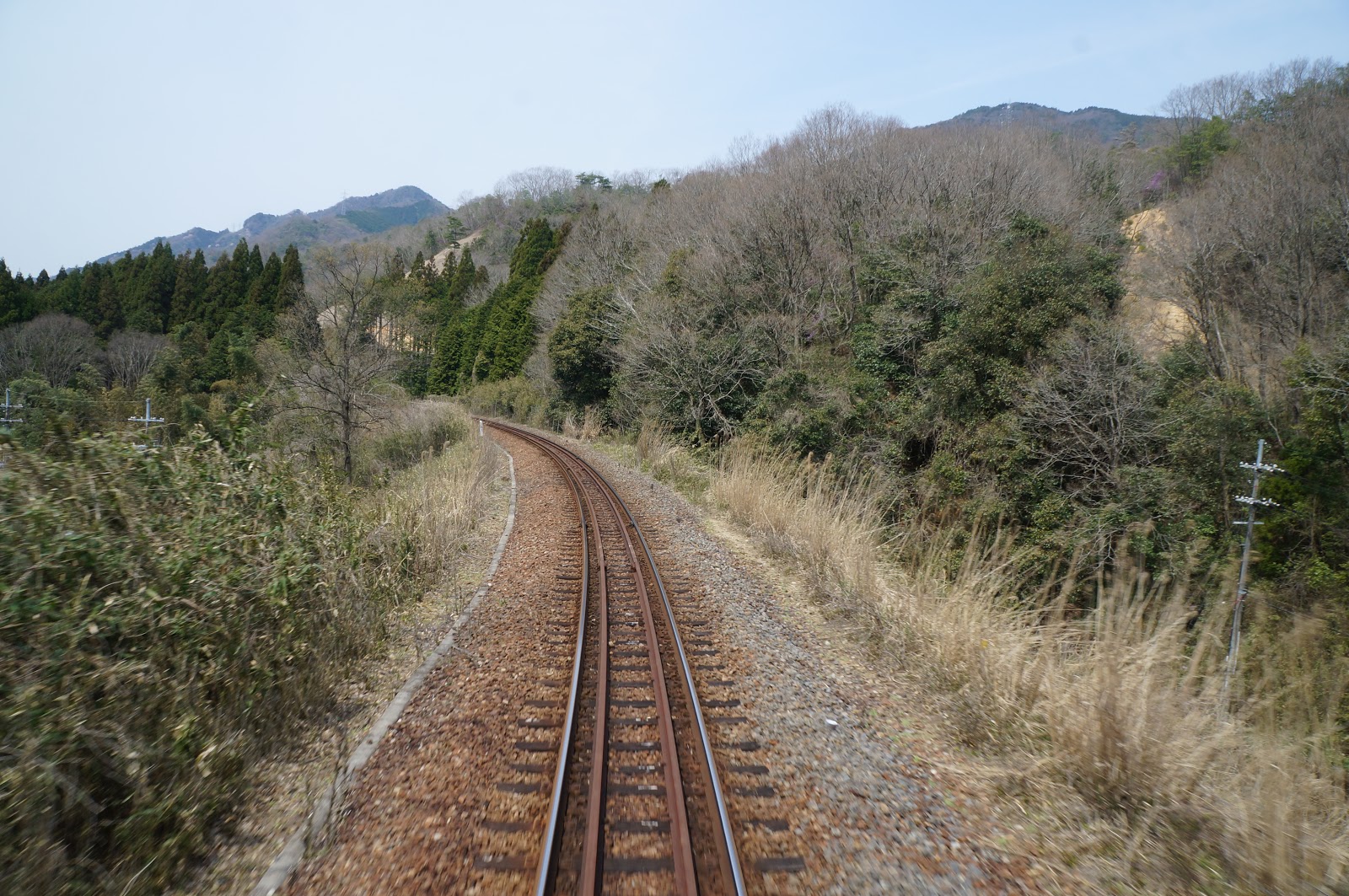 At Iga-Ueno I saw a connecting private railway line where the trains had pointed eyes. I later found out on the flight back to Australia that Iga-Ueno was home to one of the two big ninja schools and might be well worth a visit in future. 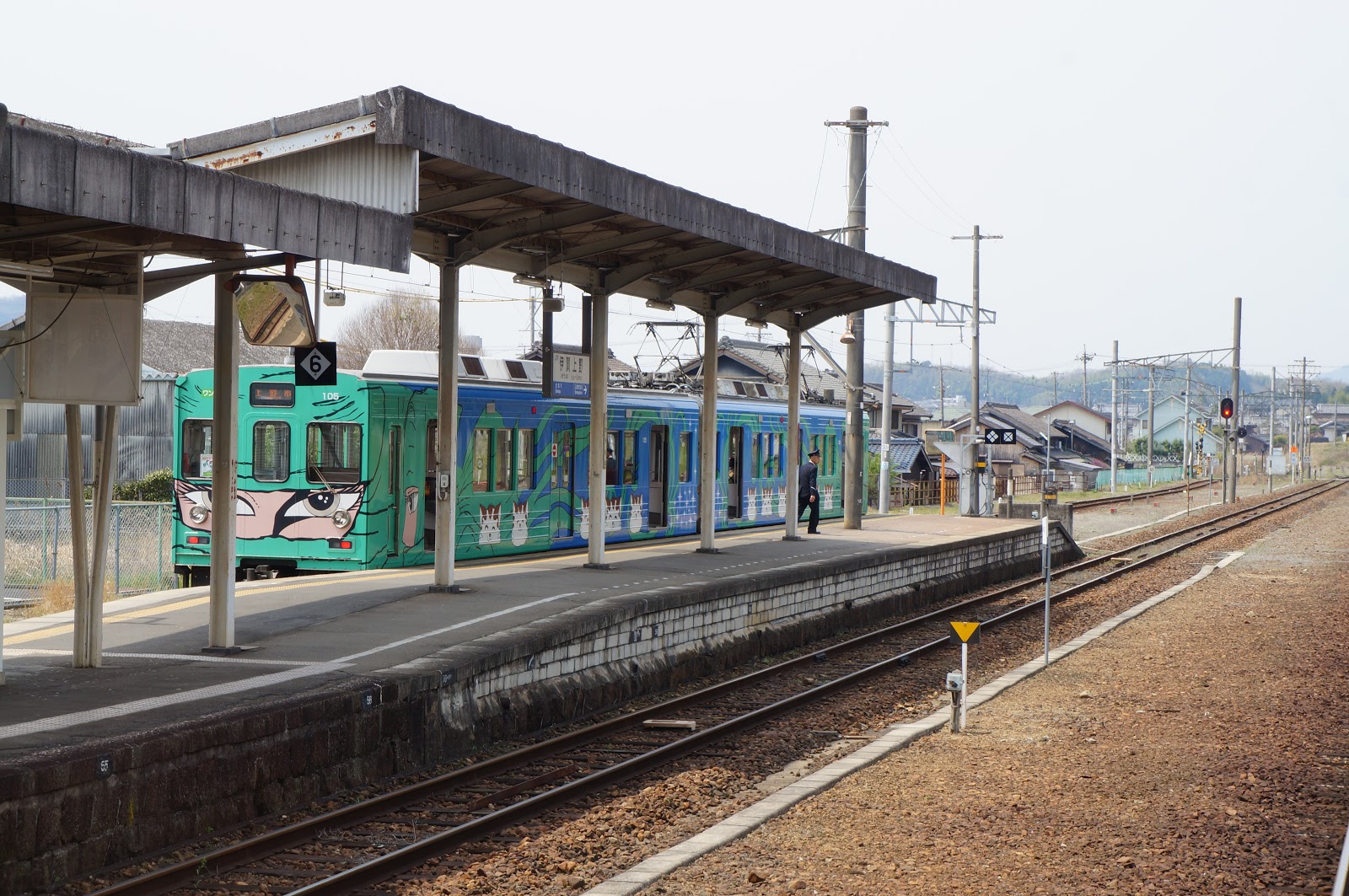 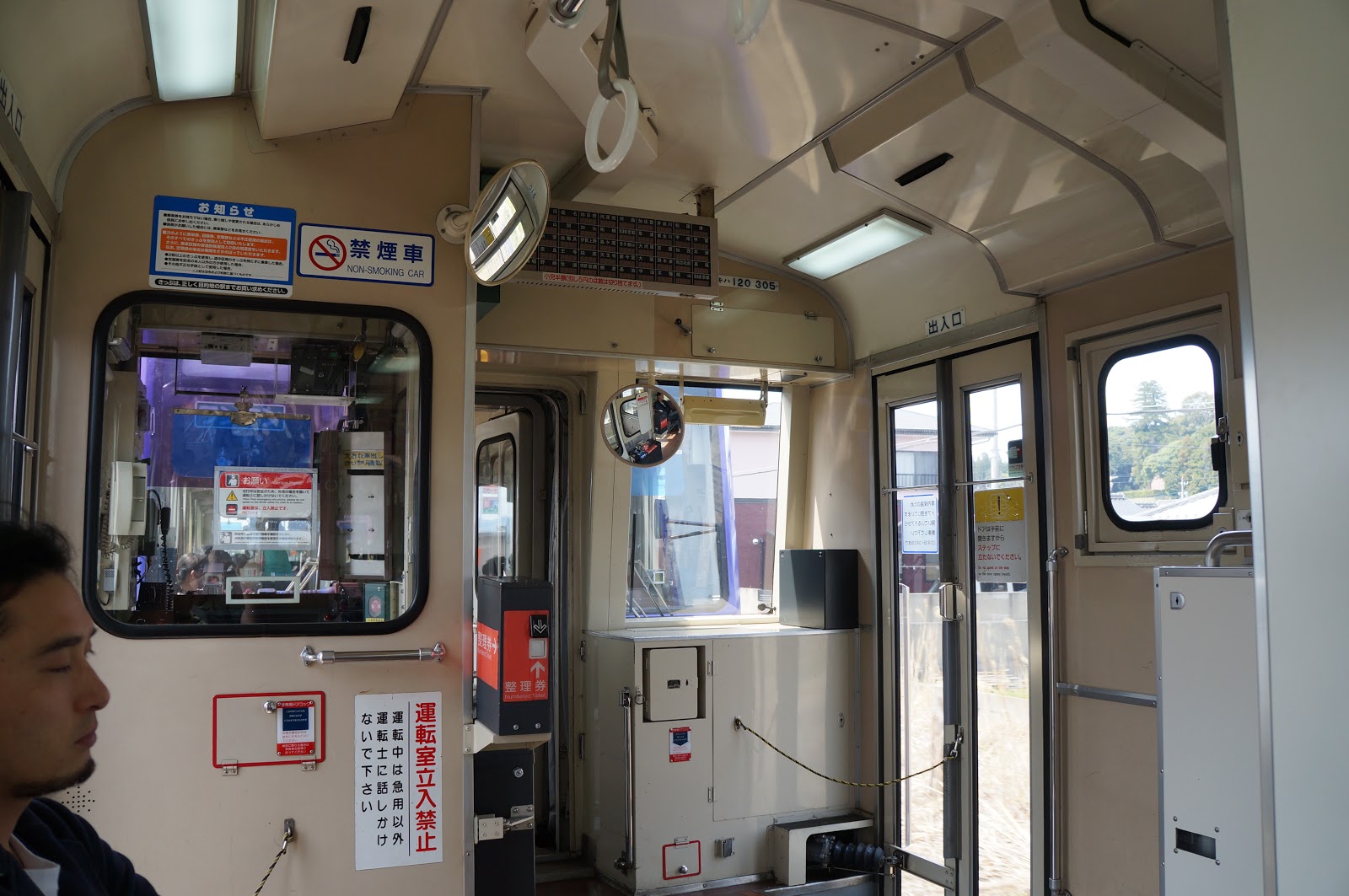 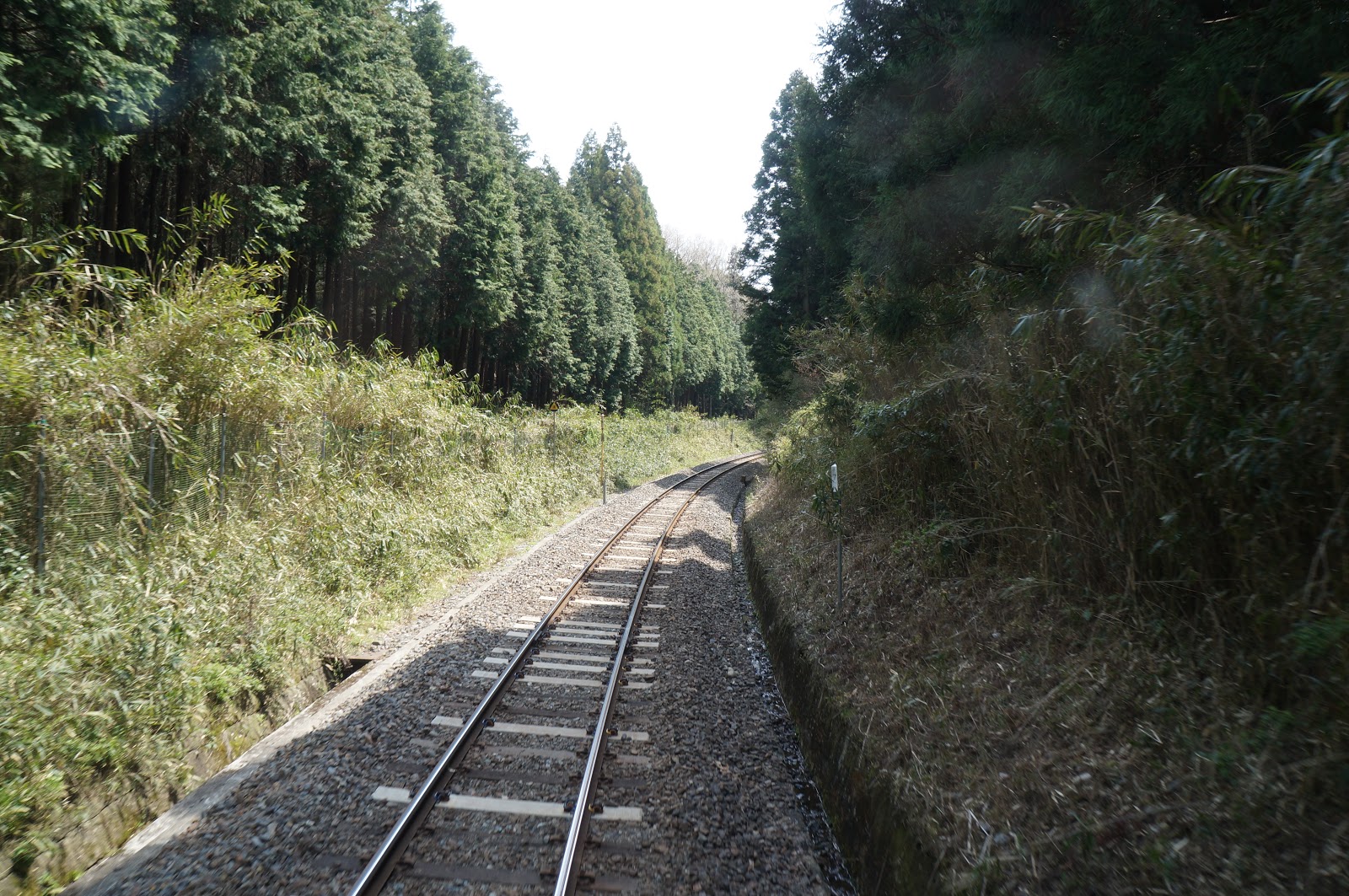 Though the train continued on further we left at Tsuge, where there was a connecting electric train to Kusatsu where we could join a train to Kyoto and Osaka. The old green train soon arrived, but we had about 20 minutes before departure. I crossed platforms to the station building in search of some food or snacks, but nothing was to be found and there wasn't time to explore further. 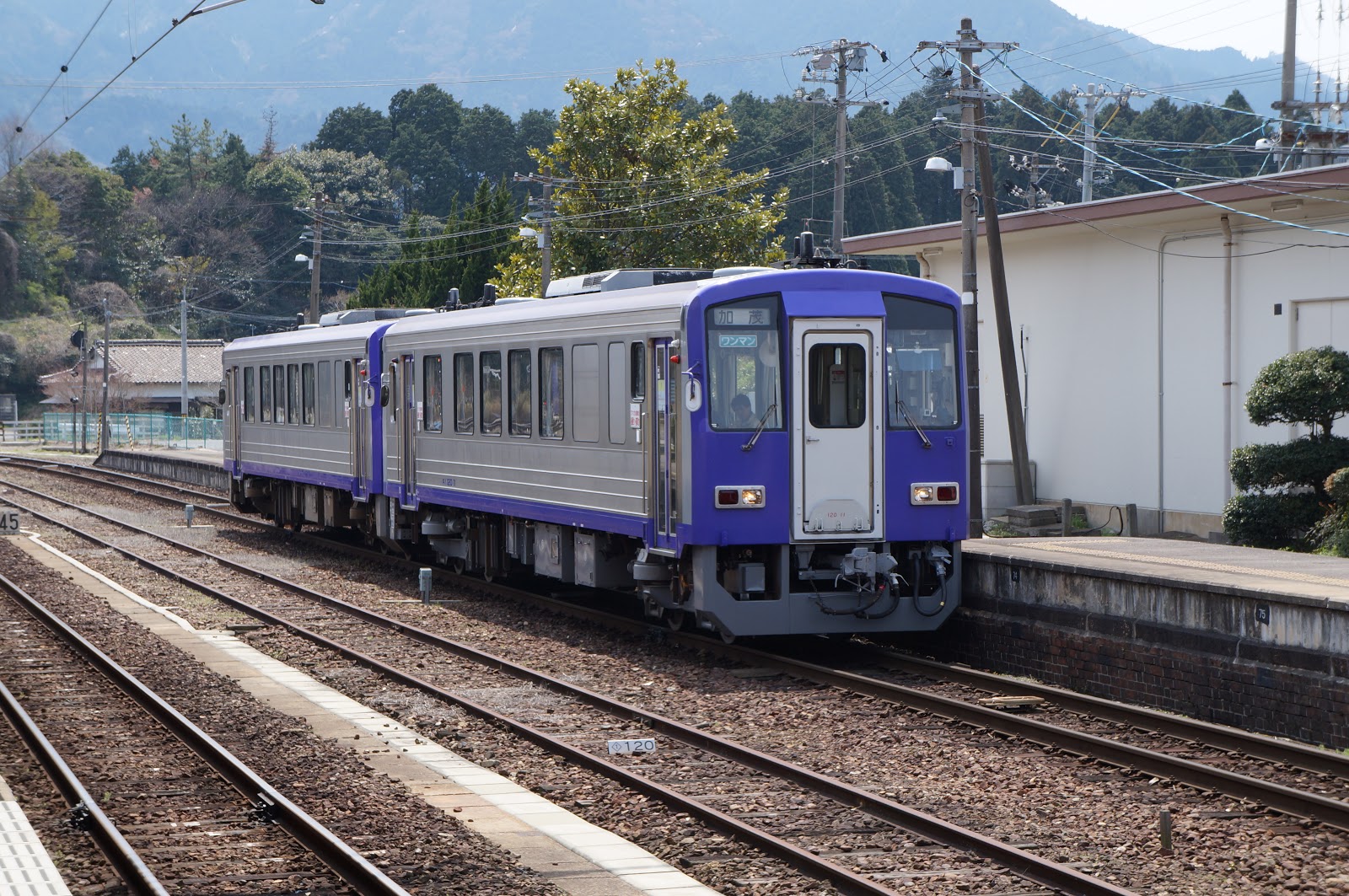 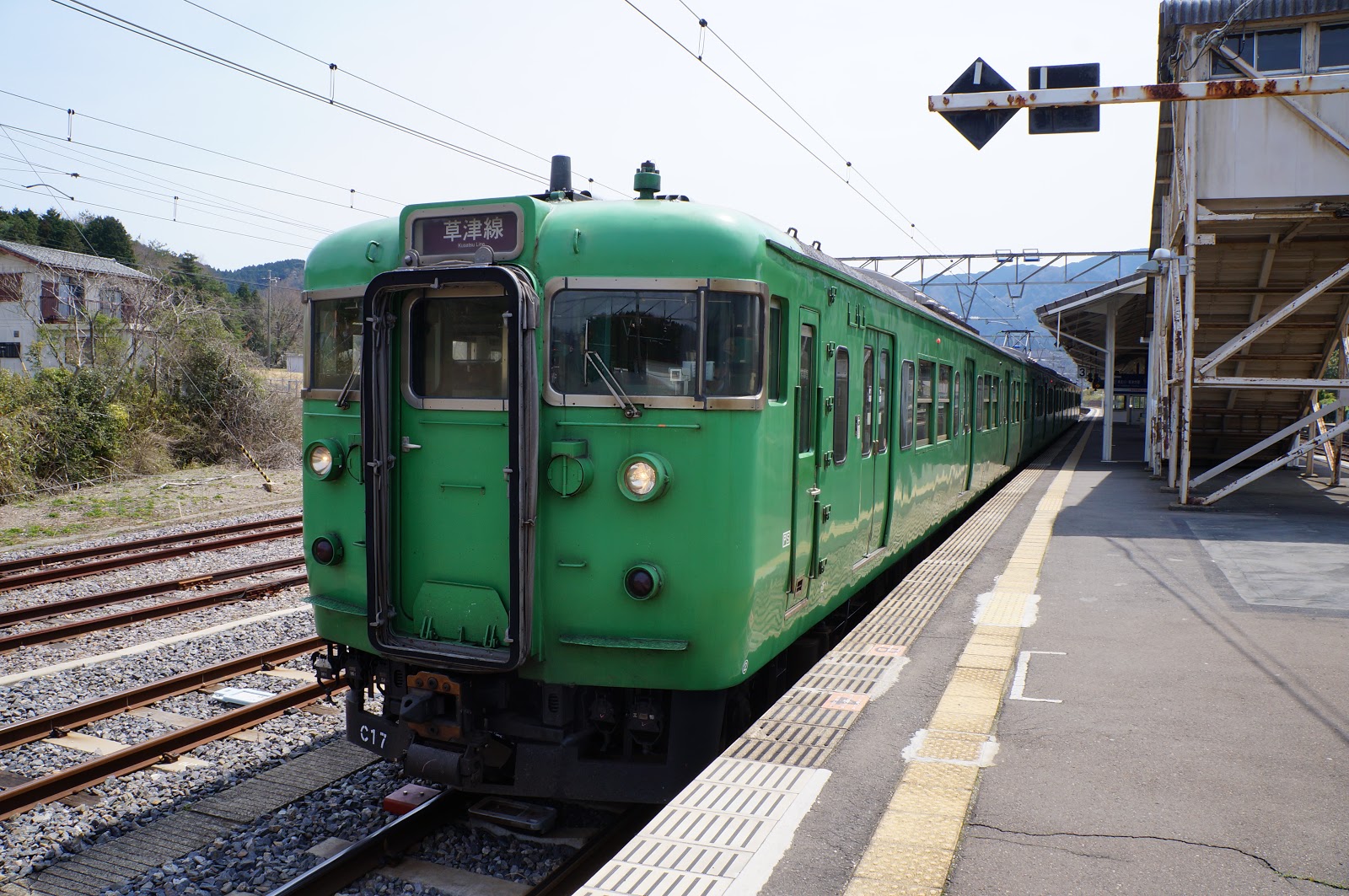 The Kusatsu Line was a relatively pleasant rural line of about half an hour's length. 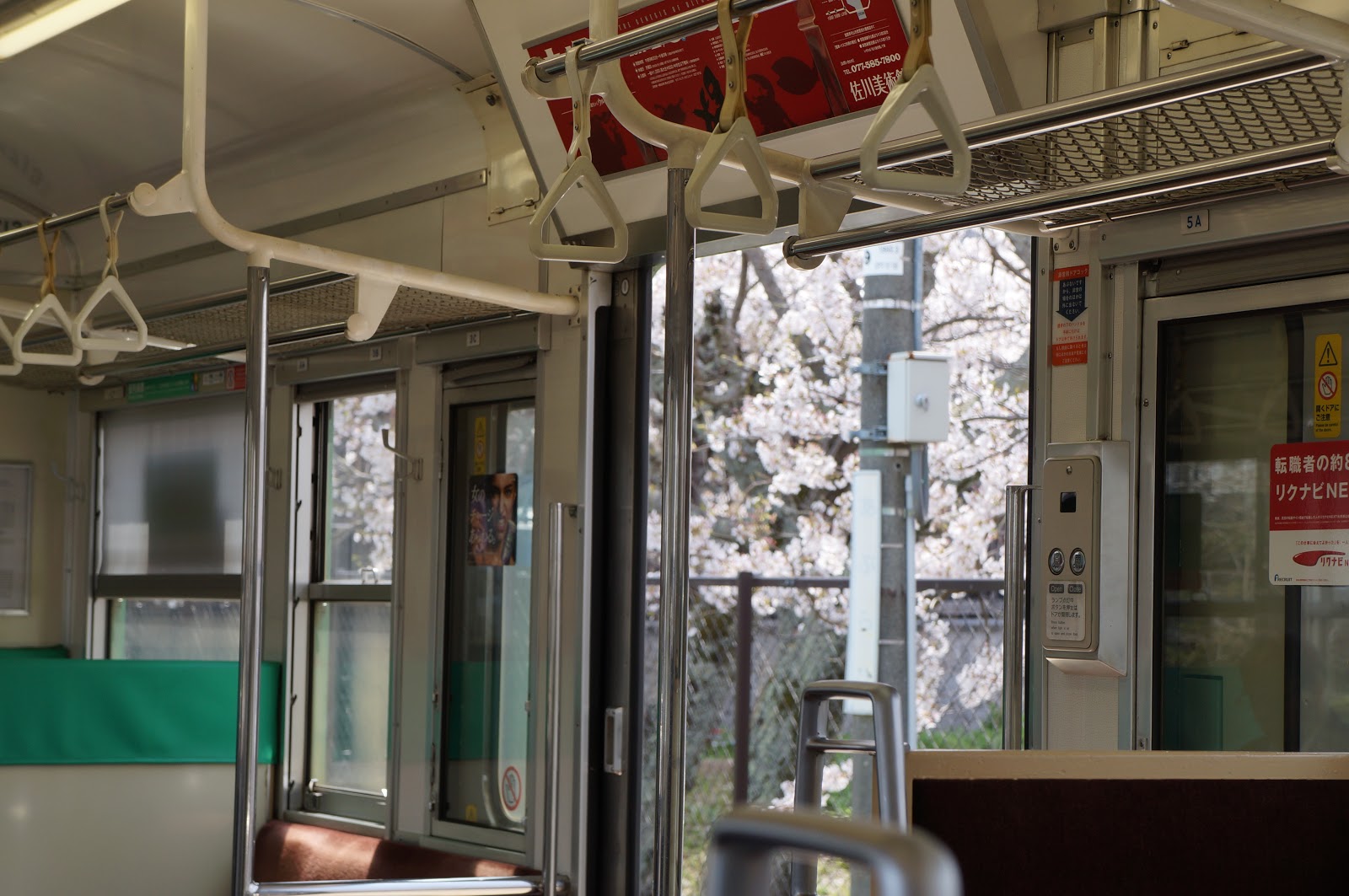 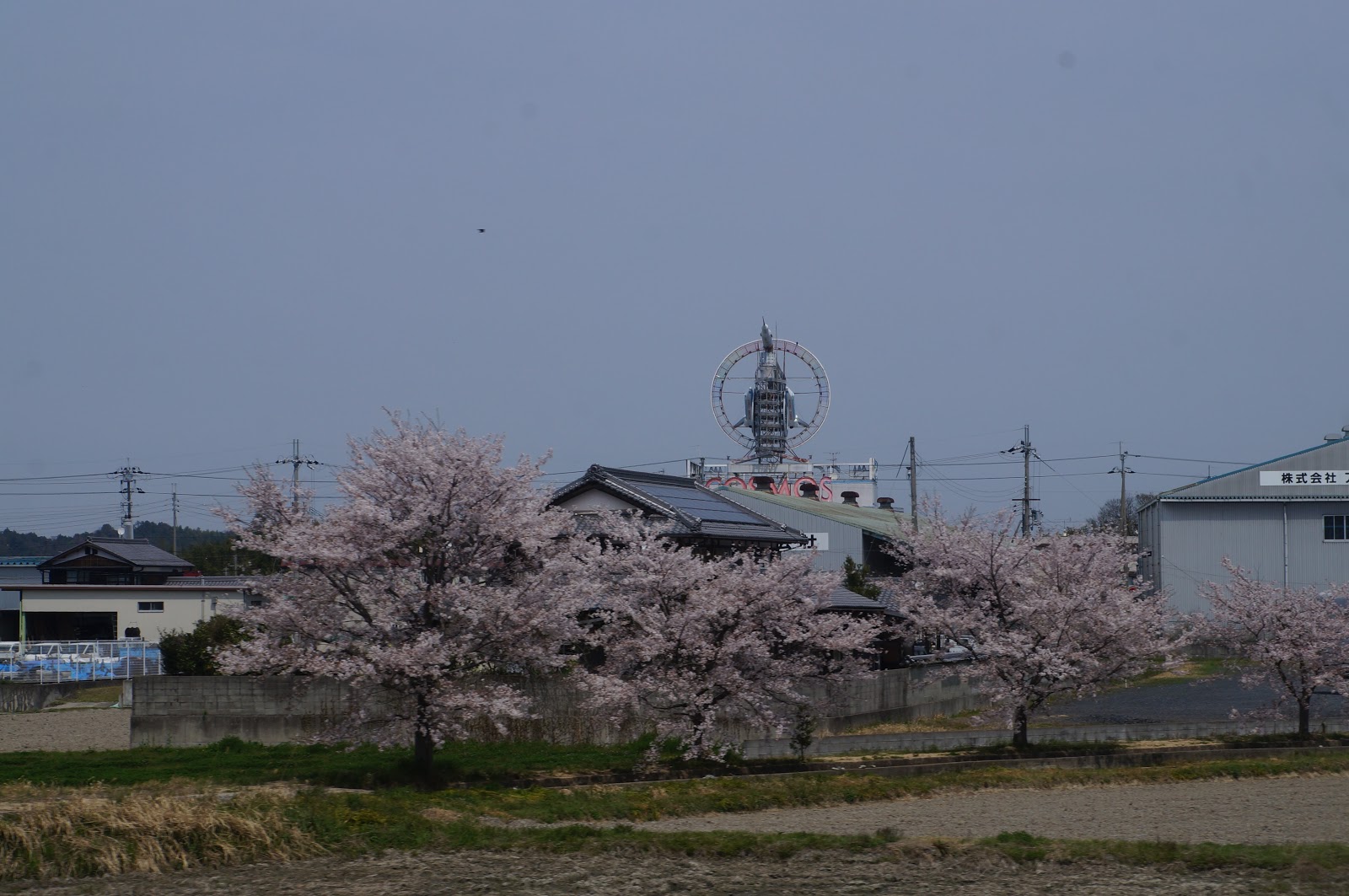 We arrived in quiet Kusatsu quite hungry. Though we could have quickly continued on to Kyoto we thought why not see a little along the way and find out what this small city can offer.

Two supermarkets sat adjacent to the train station. Food options seemed quite limited, but beneath the first supermarket was one of those old street replicas. Unfortunately, most of the eateries were closed until the evening. We found a restaurant where one of the specialities appeared to be unagi - eel. The unagi in Japan tastes a lot better than what we get here, so I encouraged Mum to get the unagi don - eel on rice - set. 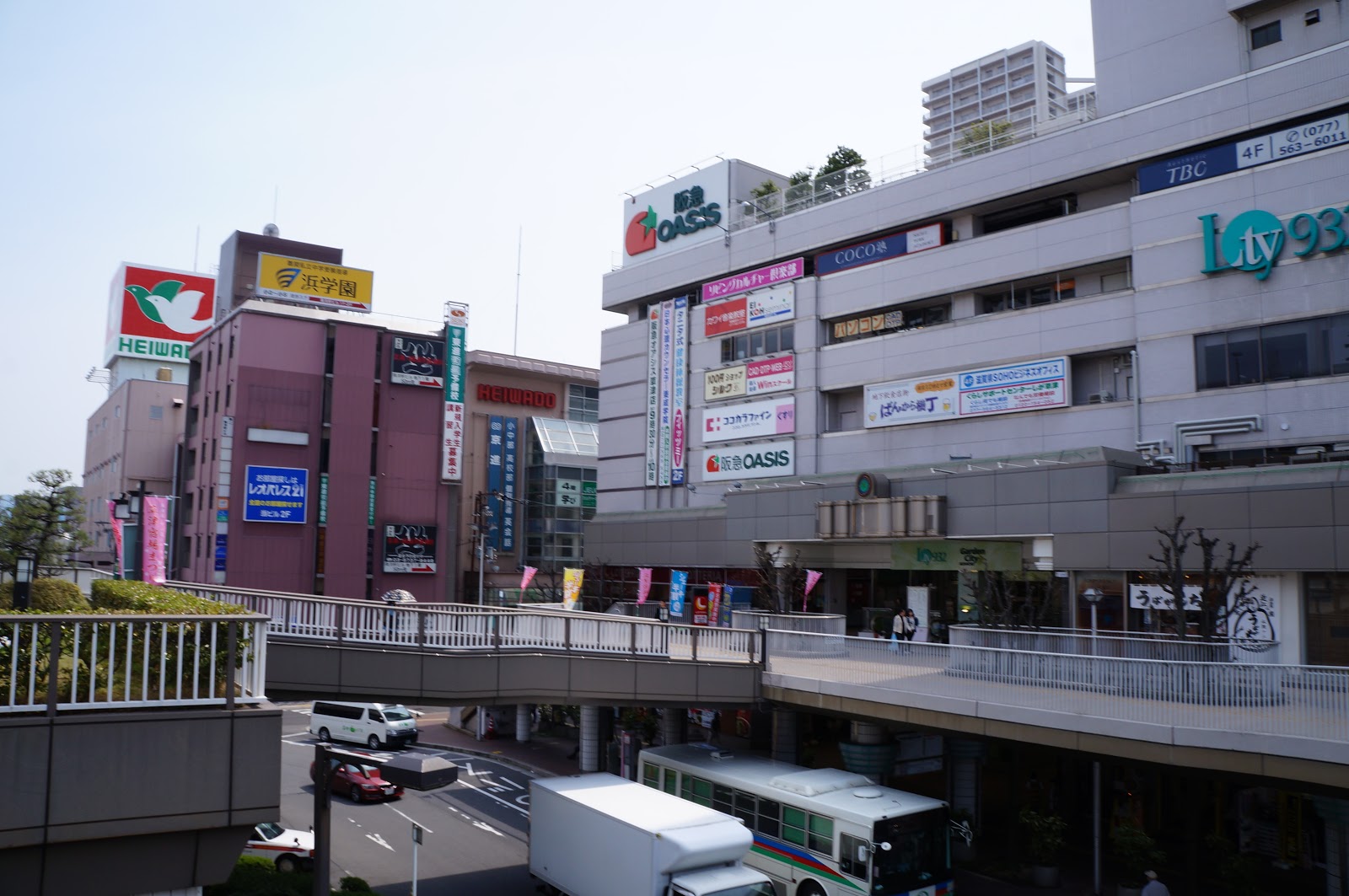 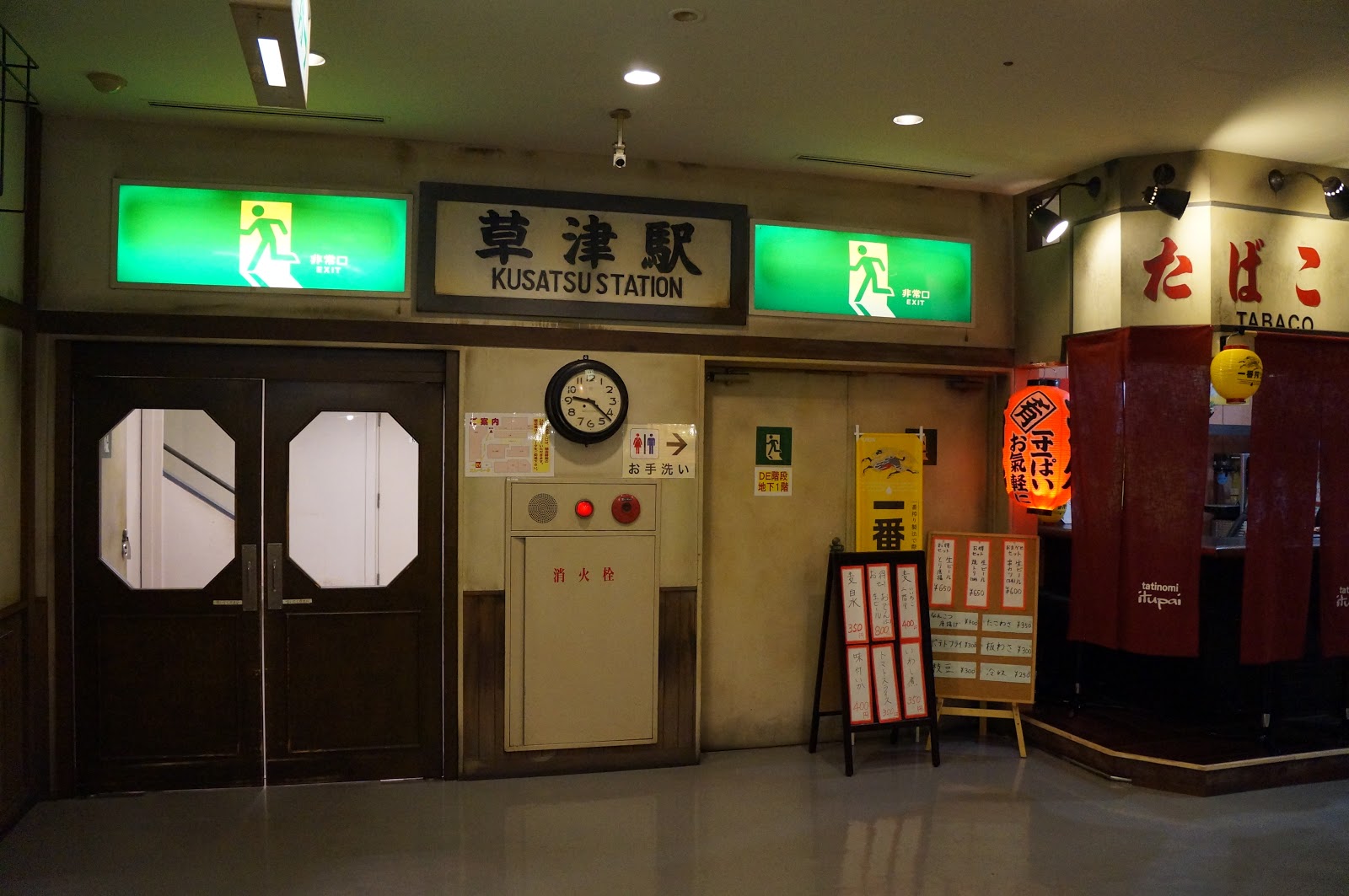 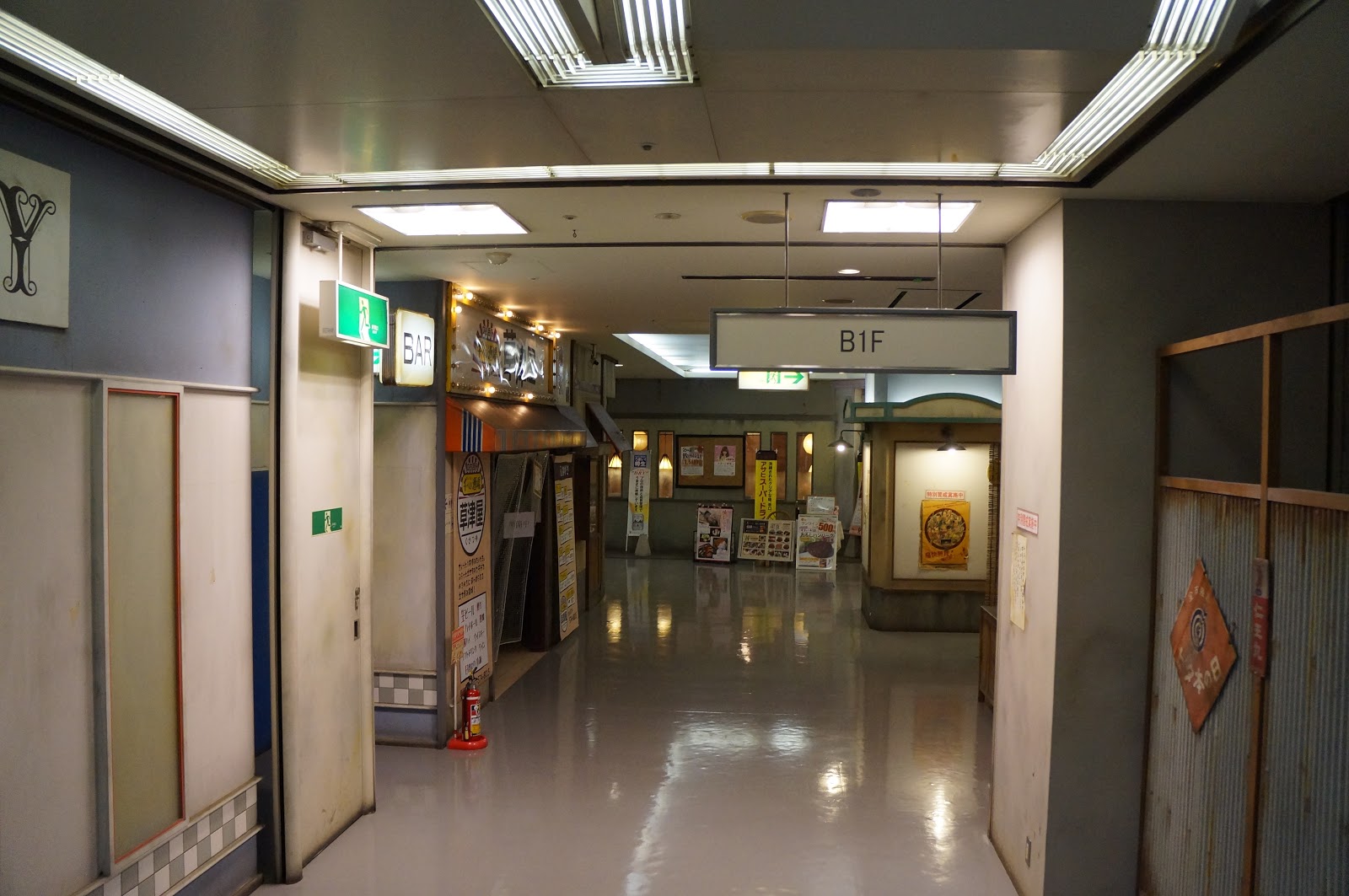 Our Yen stocks were getting low, so I just selected zaru soba (cold soba noodles dipped in sauce). I had forgotten how much I enjoyed this dish. Back at the concourse level I got myself a curry bun (so smooth) and Mum had a coffee.

The express we boarded was headed all the way to Osaka station, so there was no need to do anything but relax all the now familiar way. 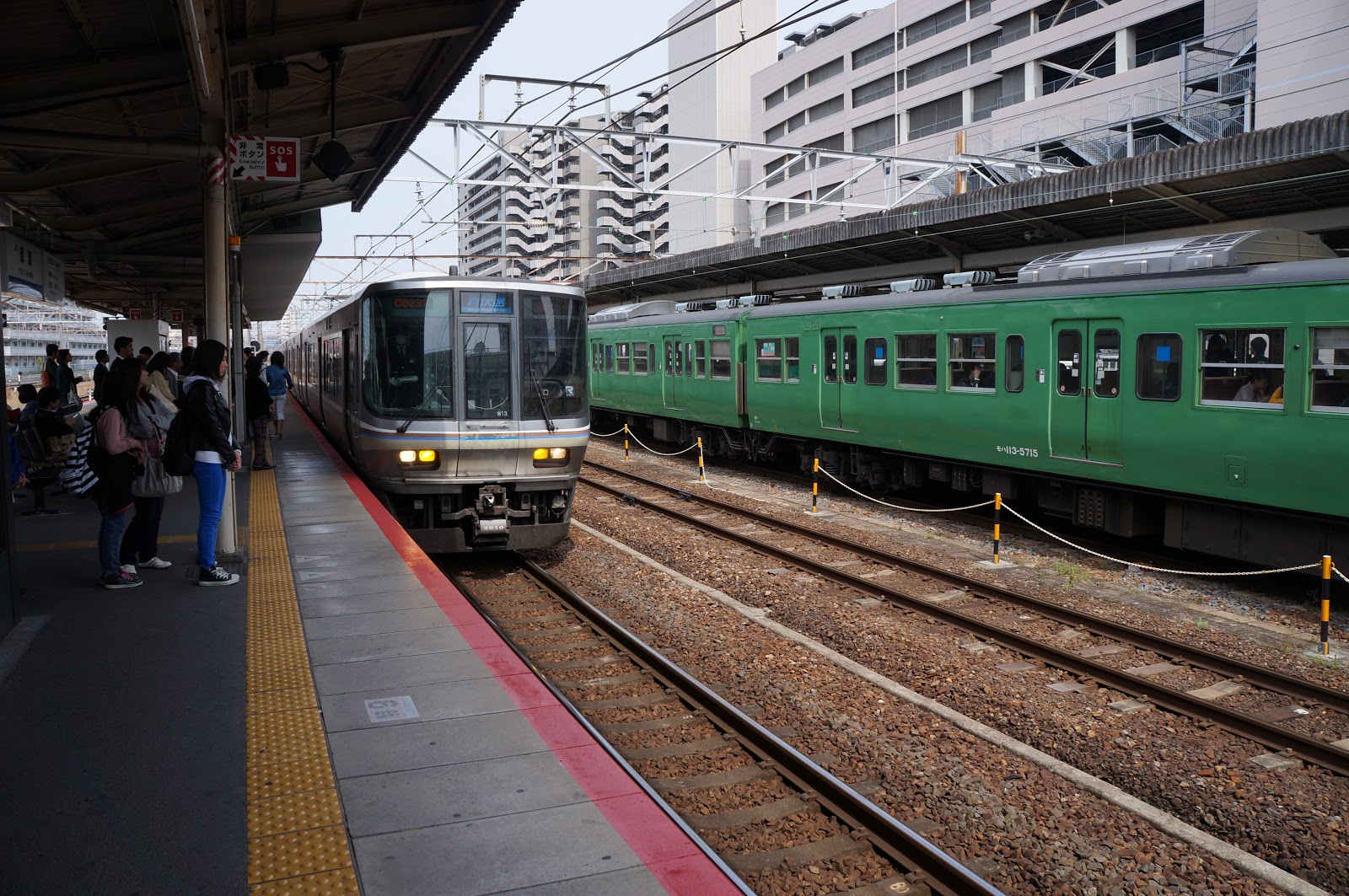 At Osaka I reserved seats on the train to the airport, then we quickly did last minute shopping at the Tokyu Hands embedded in the Daimaru Store in the station building. I found most of what I needed, then we rushed back to the hotel, stopping to buy Japanese toothbrushes for B in the nearby pharmacy.

I felt a bit of sadness saying goodbye to the area, knowing how much B and Alex would love it. Then we collected our luggage, boarded a service to Shin-Osaka, where we changed platforms to wait for the Haruka service to the airport.

Unbelievably for Japan the Haruka was eight minutes late! I had to check that we weren't back in Sydney already!

Then all aboard for an all too familiar journey through a grey city that is improved by the golden afternoon light. I had time to reflect on the trip. How was it introducing my Mum to Japan? I had thought that perhaps I would see Japan with fresh eyes, but it wasn't really the case. It was fun to revisit some of my favourite places, especially Kanazawa and Gujo Hachiman. 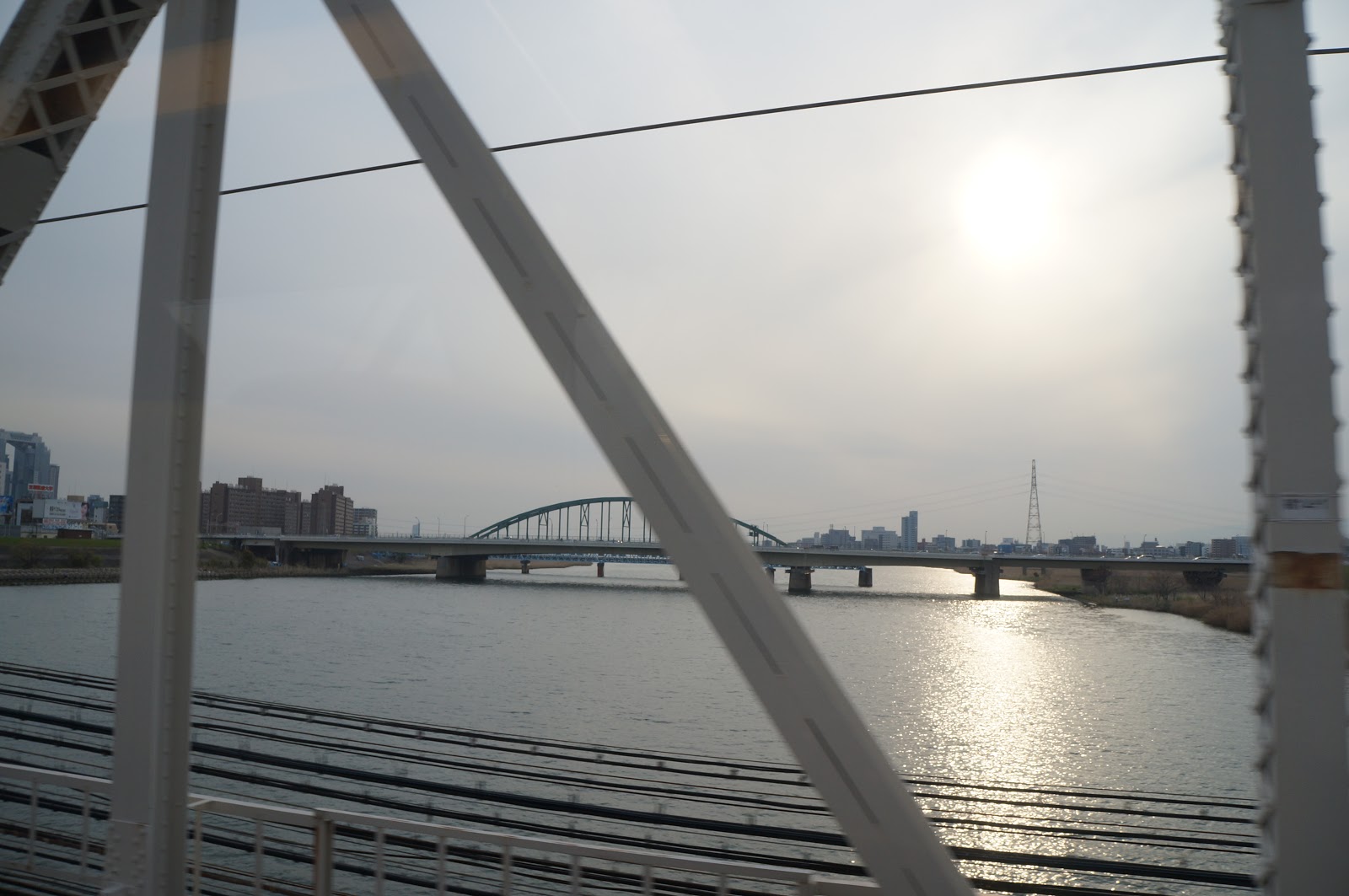 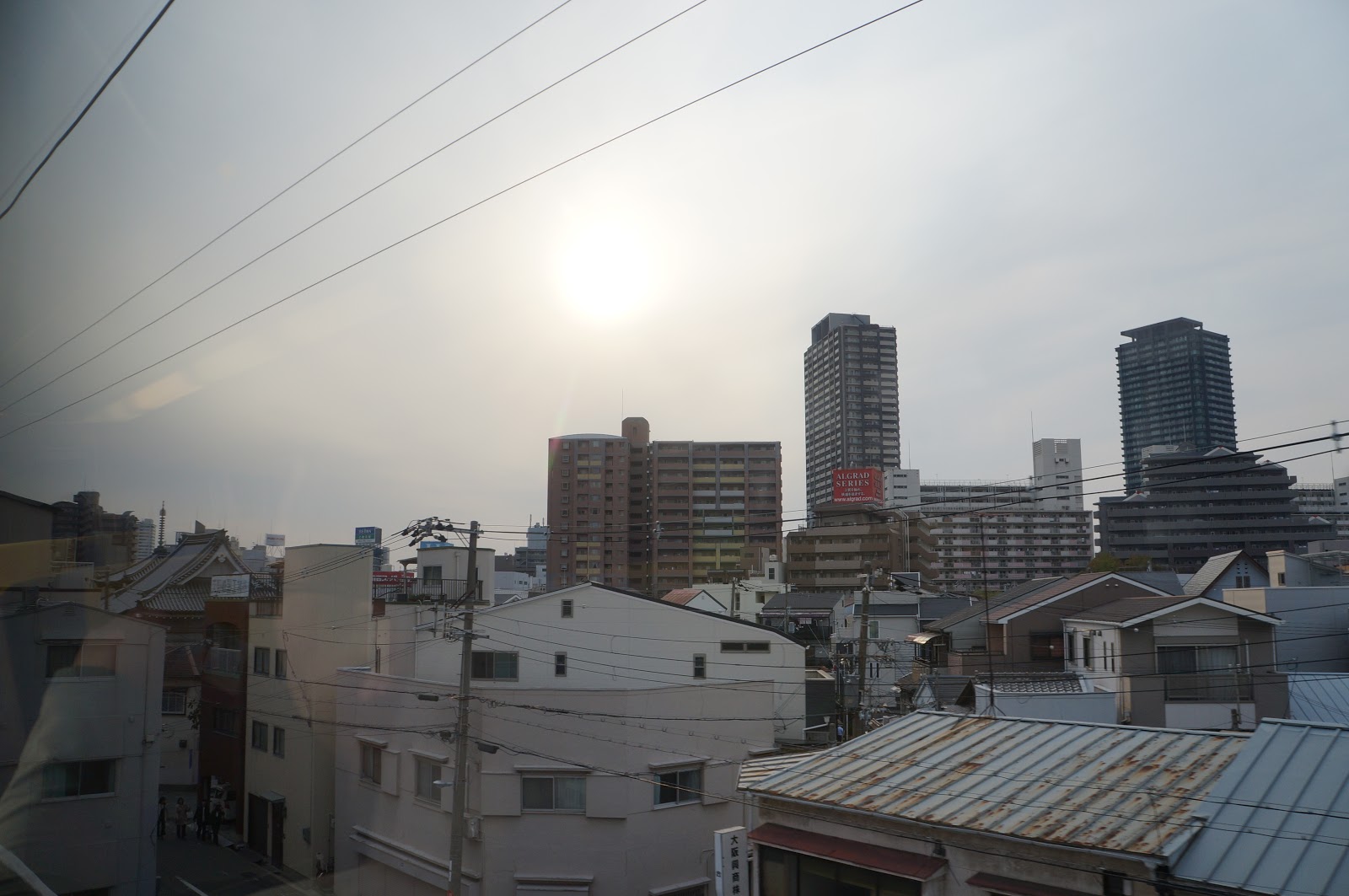 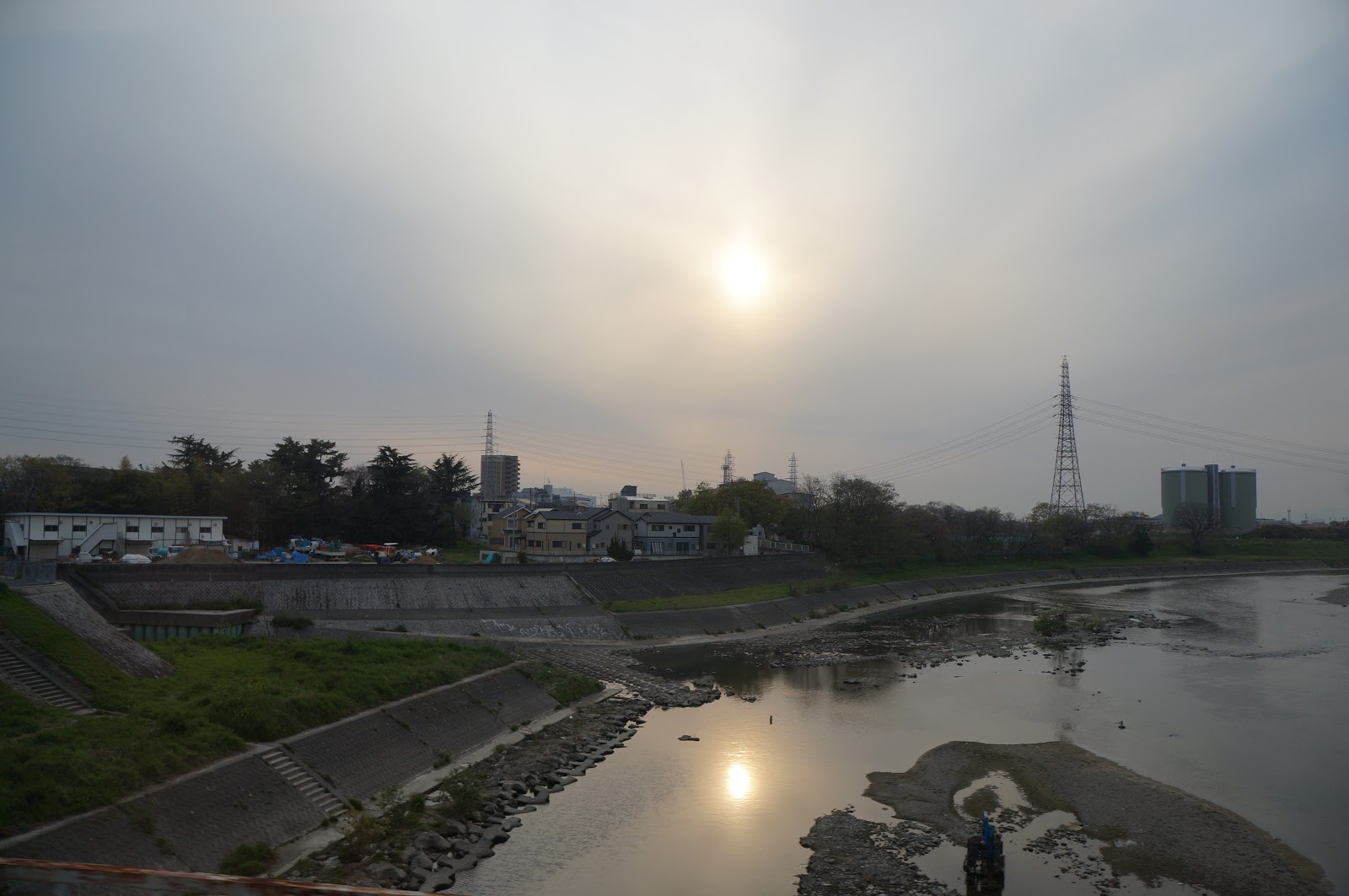 But it was different experience to the crazy world of Alex who picks up on the funniest details, B who shares most of my history of the country and has her own favourites or just by myself without limits on exploration.

Watching my Mum I realised that much of Japan was a bit like Sydney and so many other big cities. Especially in the cities people move with a purpose and a knowledge of their destination. There is no time for hesitancy and indecision. A dense, fast paced society where the parts move past each other with the minimum of friction, of interaction.

This is not the way of the elderly in Australia, especially those from the country, but for the introvert it is close to paradise.

Despite all of this Mum told me that it was a trip of a lifetime for her and it was good to be able to share with her for real some of the sights she has only seen before in books and my photos online.

As the red sun set across the waters around the artificial island that is Kansai International Airport I was leaving with the knowledge that I would be back in a few months time to have a very different holiday with B and Alex. And I wasn't as sad as I usually are at such partings between me and what feels like my second home.