Shimogamo Shrine and the Path of Philosophy 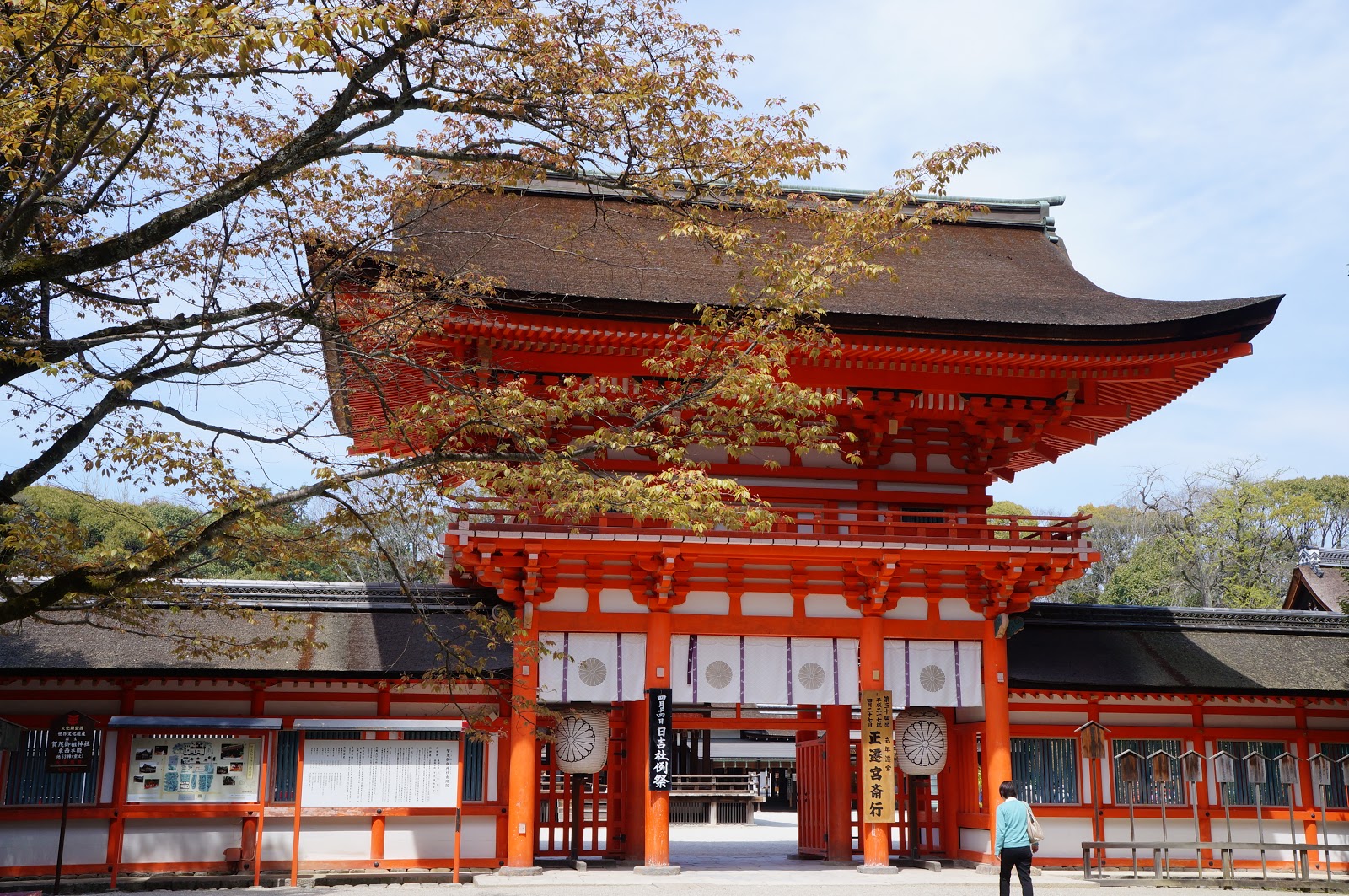 I was tired and I was terrified. This was supposed to be our last day in Japan, we would fly back in the evening for Australia. But we had a transit in Cairns and category 5 Cyclone Ita was bearing down on the city. Being on the edge of Typhoon Fitow on the flight up to Osaka in October last year was scary enough, but the thought of being tossed around as we descended into Cairns was more than I could handle.

I checked the Jetstar website the night before, I checked first thing in the morning. No cancellations listed. I went to check my booking online.

Yes! Desperate as I was to see B and Alex again, I wanted to stay out of the storm.

Flight options were displayed, but... Mum was on another booking and she was asleep.

Fortunately, the Jetstar call centre is contactable on standard Skype, so I wasn't faced with a huge phone bill.

Answer on the first ring. Surprised!

Yes the flight had been suspended. But I needed Mum to wake up to change flights.

I tried to enter my booking again to change it first. The system wasn't working.

I called again. Now I was put on hold for over half an hour. I used my computer Skyped in as a speaker phone. Eventually I got an answer and I got Mum into the room and we sorted it all out, except for my seat in Business Class. We now had an extra day.

I looked into the accommodation options. Osaka and Kyoto were both heavily booked and we ended up keeping our rooms for a rate equal to the two previous nights. Hopefully travel insurance will cover it all.

So now we could do whatever we liked today without the need to race back to the airport. There were still places to see in Kyoto, but rather than pass through Kyoto station five times in a row I wanted to see something different. So we caught the Midosuji subway down a station to Yodoyabashi and then the private Keihan Line to Kyoto. The railway gave a different perspective on Osaka and Kyoto, cherry blossoms and markets by the river, suburban streets and shopping centres. Perhaps we should have stopped at the Fushimi Inari Shrine with its tunnels of red torii, but I suspected that Mum would struggle through the kilometres of paths up the hill. 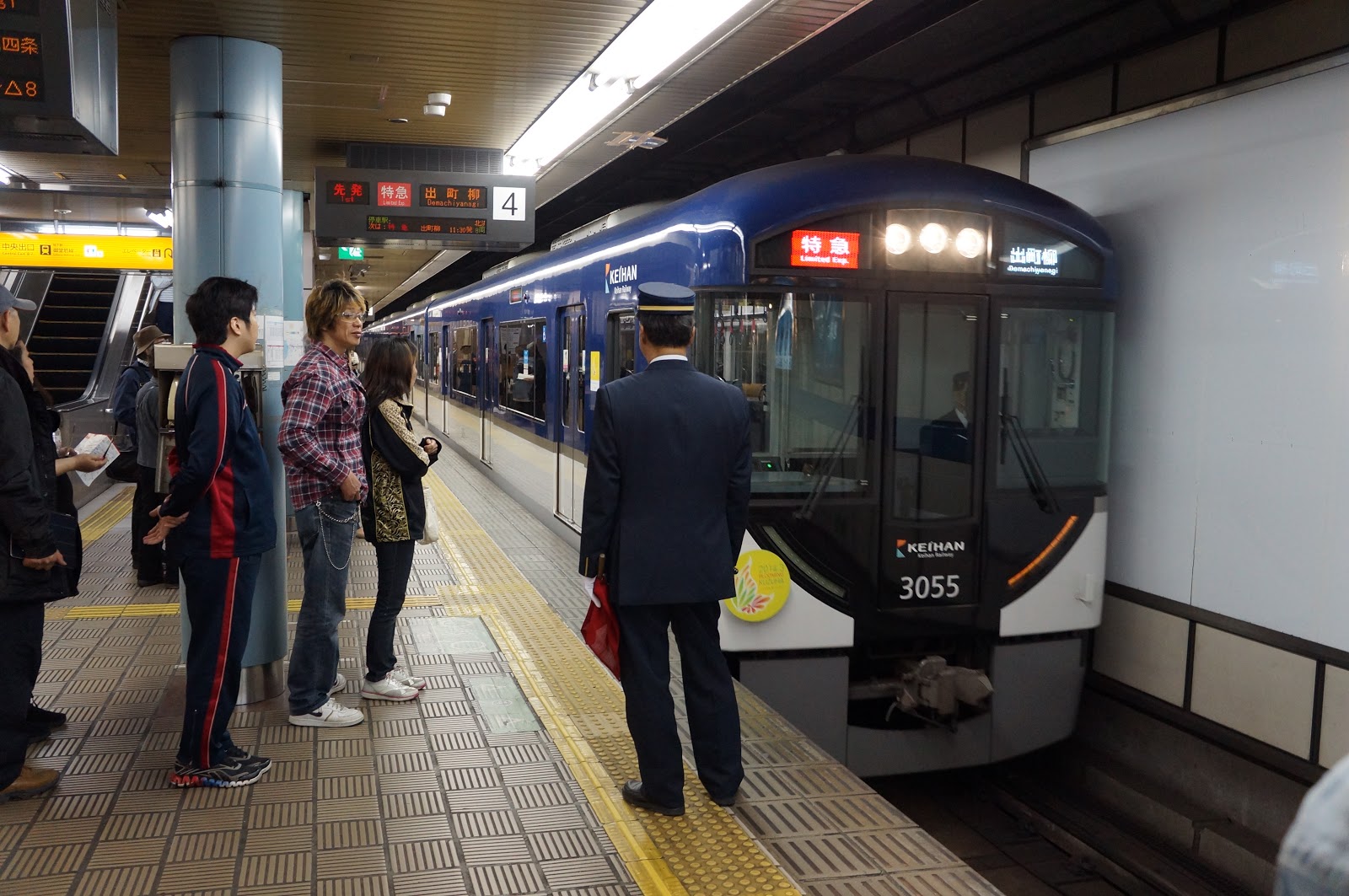 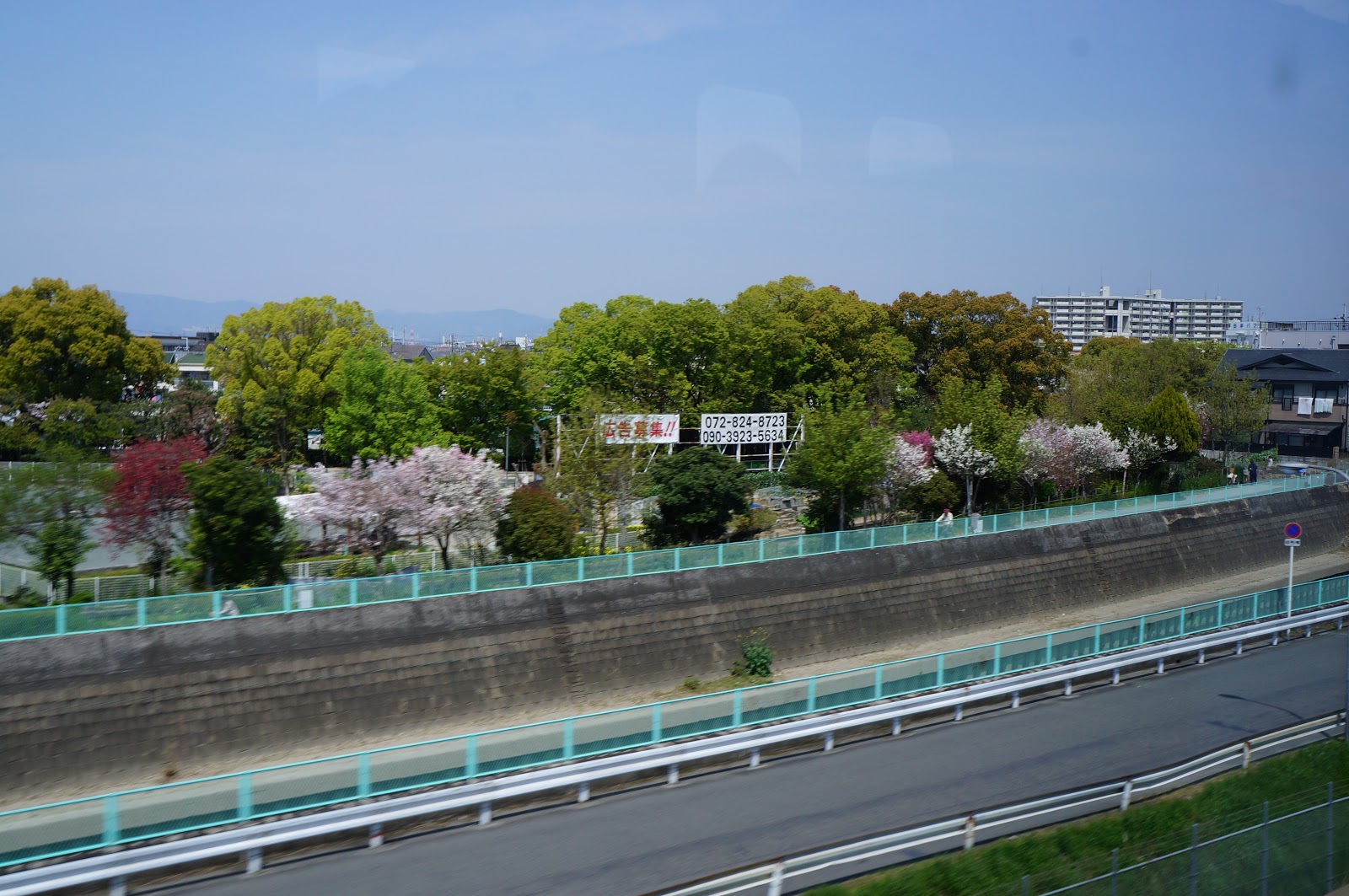 Another advantage of the Keihan line was that it ran directly to Demachiyanagi Station, closest to our destination of the Ginkakuji Temple and Tetsugaku no michi, the Path of Philosophy.

But first I wanted to visit the Shimogamo Shrine. I'd seen it on the cover of a puzzle years ago in Kyoto and thought it impressive. The shrine is at the confluence of the Takano and Kamo rivers and surrounded by a preserved forest with trees of 600 years old. The Shinto religion believes that natural objects are inhabited by spirits and some of these ancient trees are venerated with ropes with paper lightning tied around their girth. 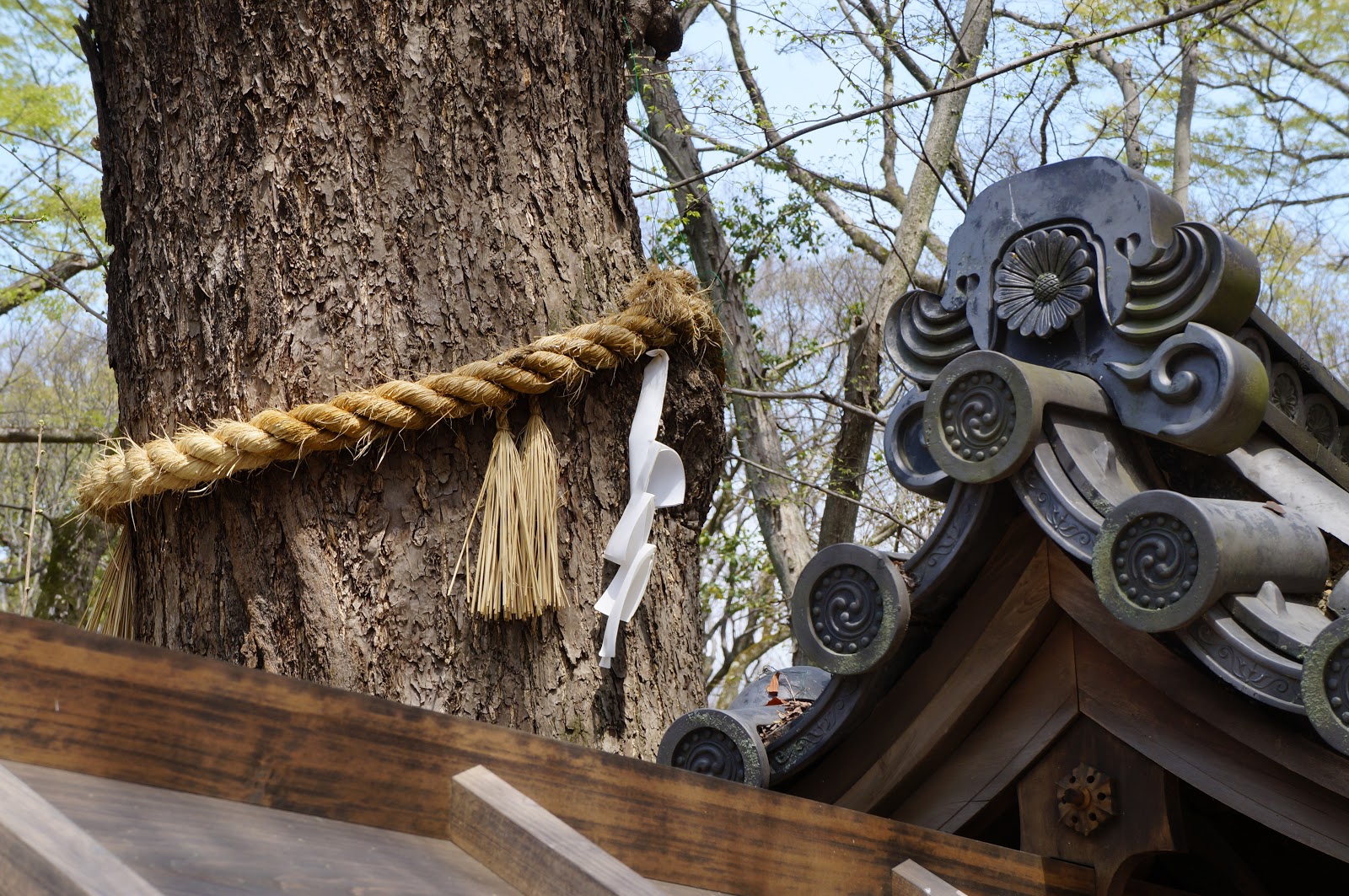 It's a lovely experience to walk beneath this canopy, especially the patterns of light filtered through the bright green and red maple leaves. 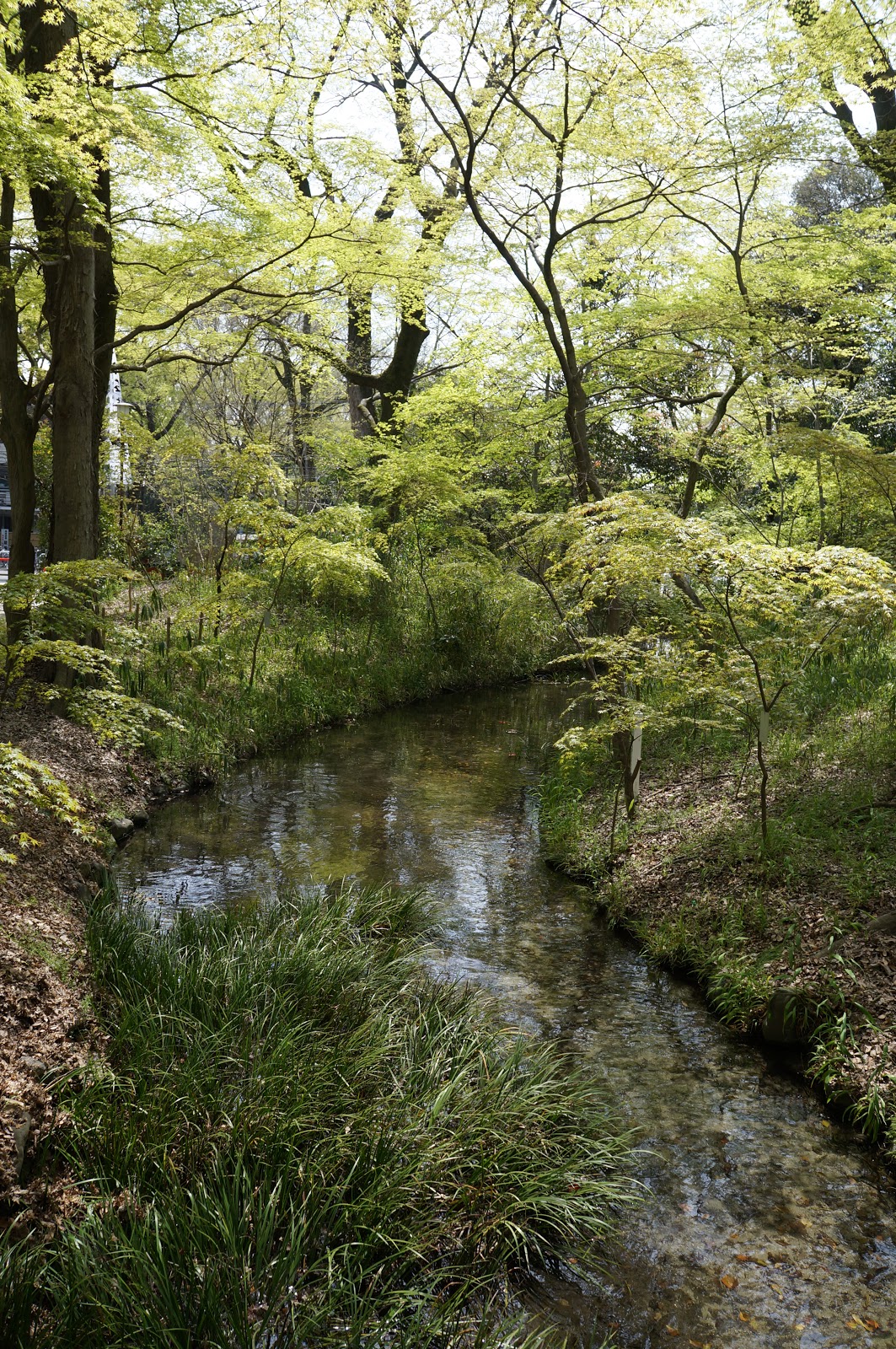 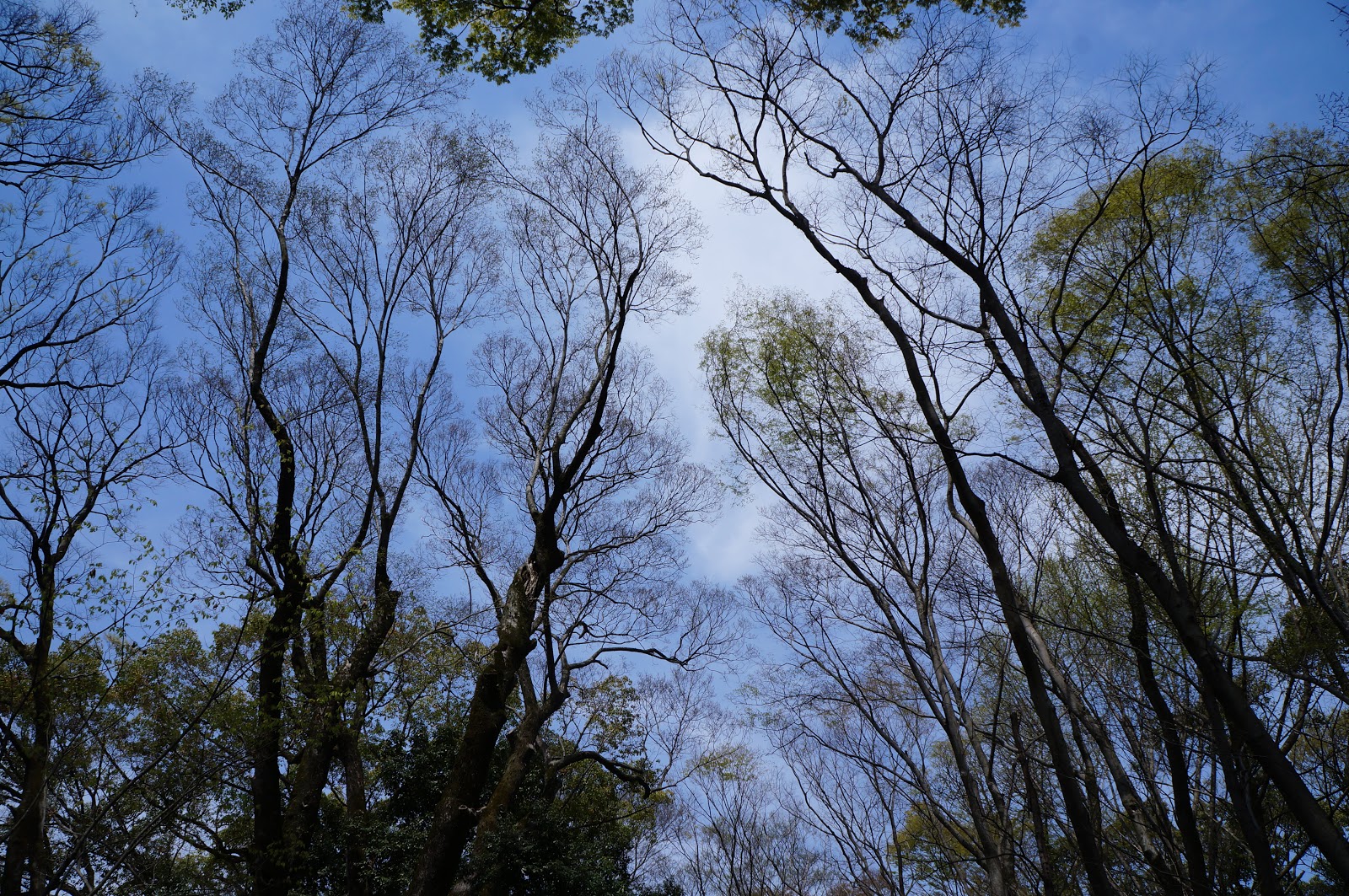 After visiting a smaller shrine nearer the entrance we stood before the bright red, white and black entrance to the main shrine area. Before us walked a wedding party, Shinto rites being an important part of the marriage process. The sight and colour made this a more special experience than "just another shrine." 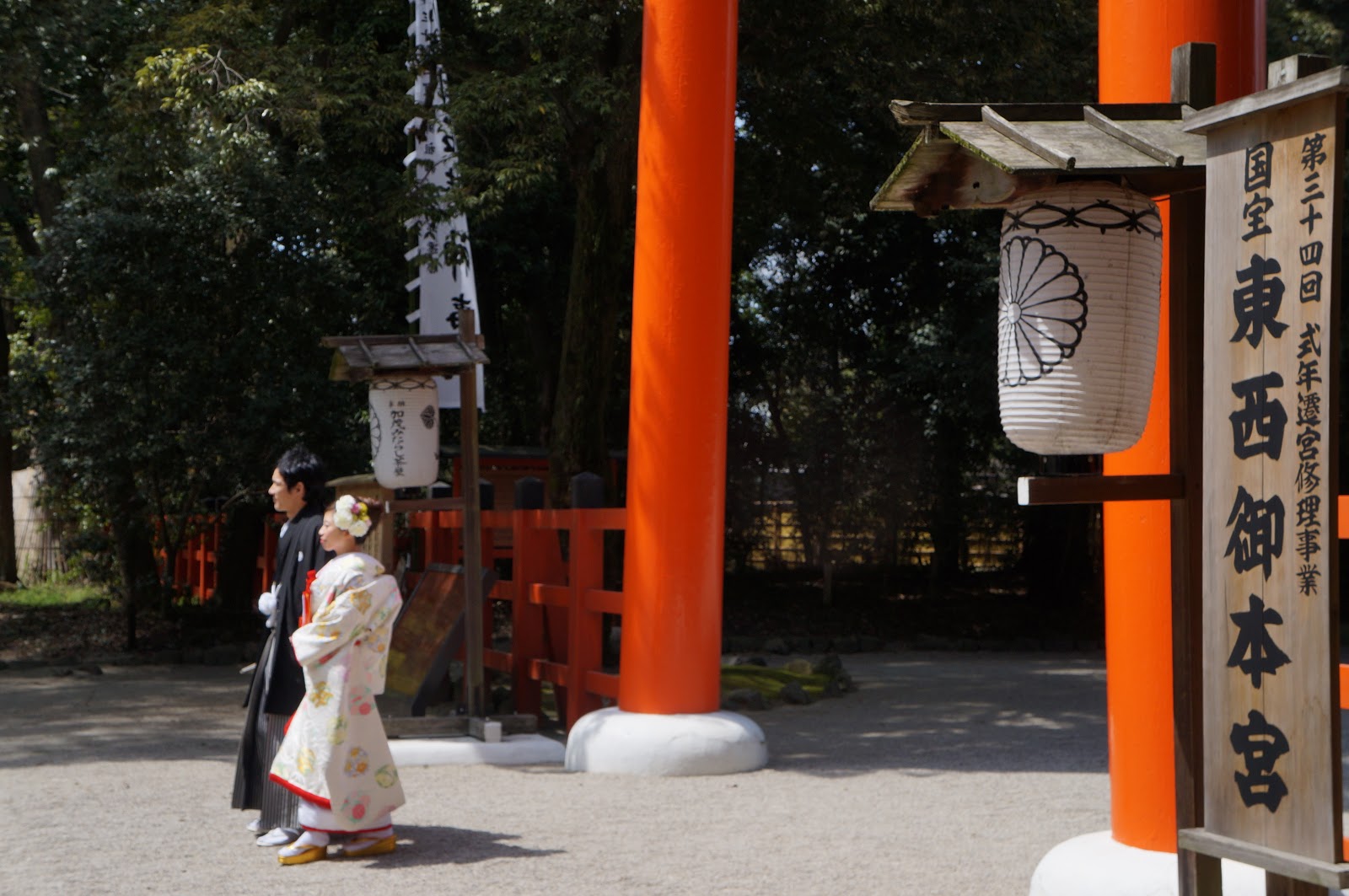 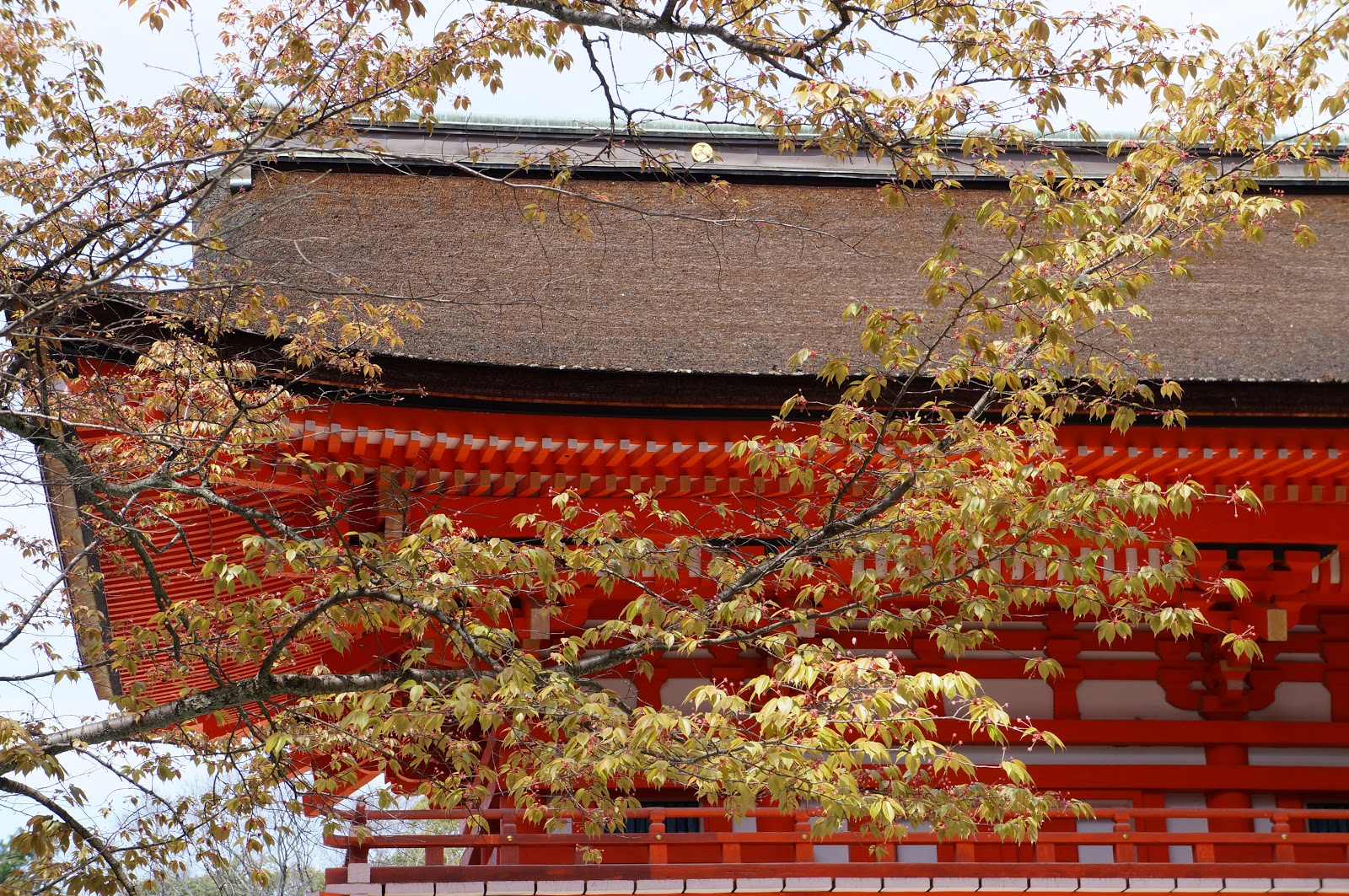 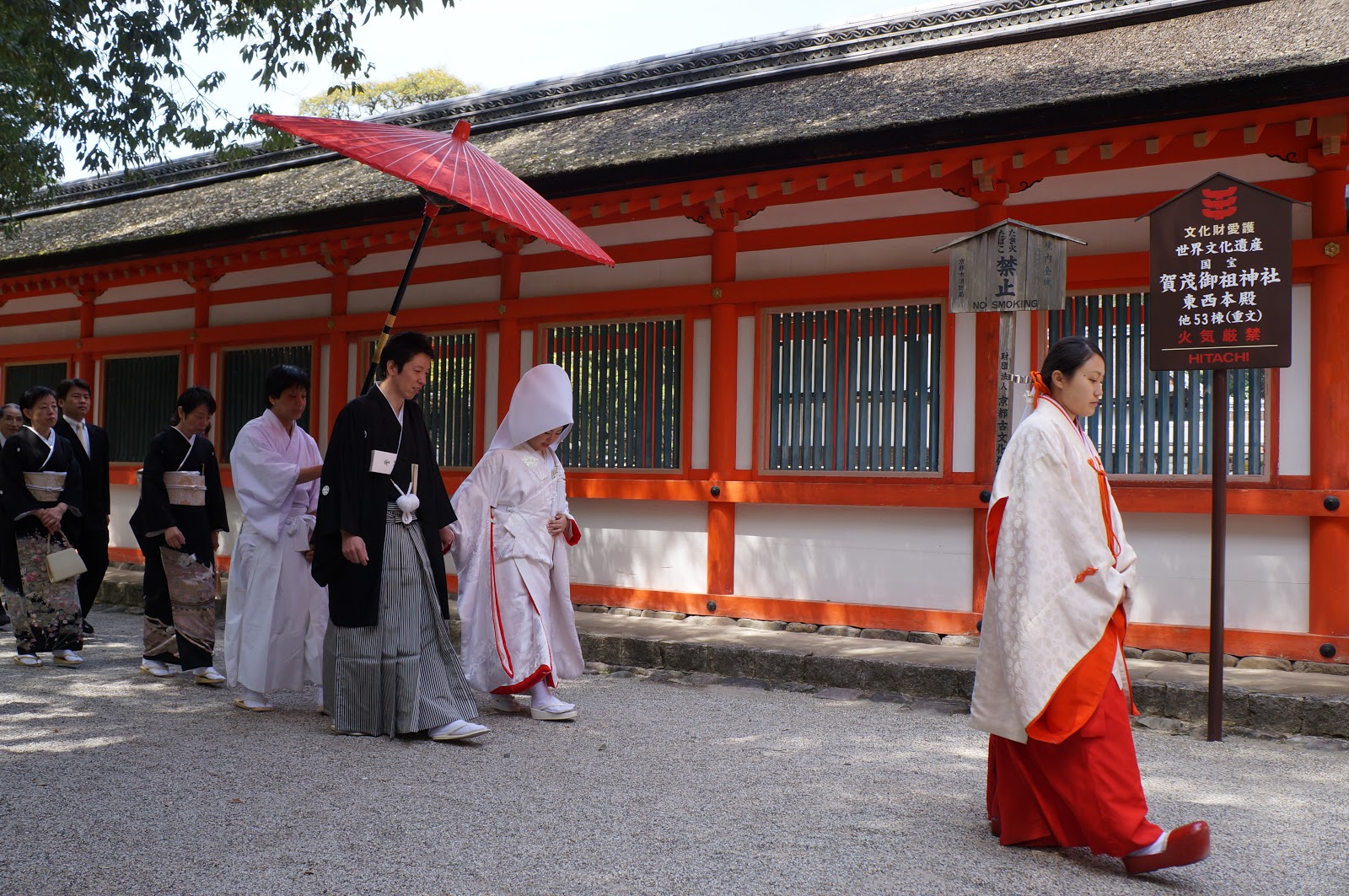 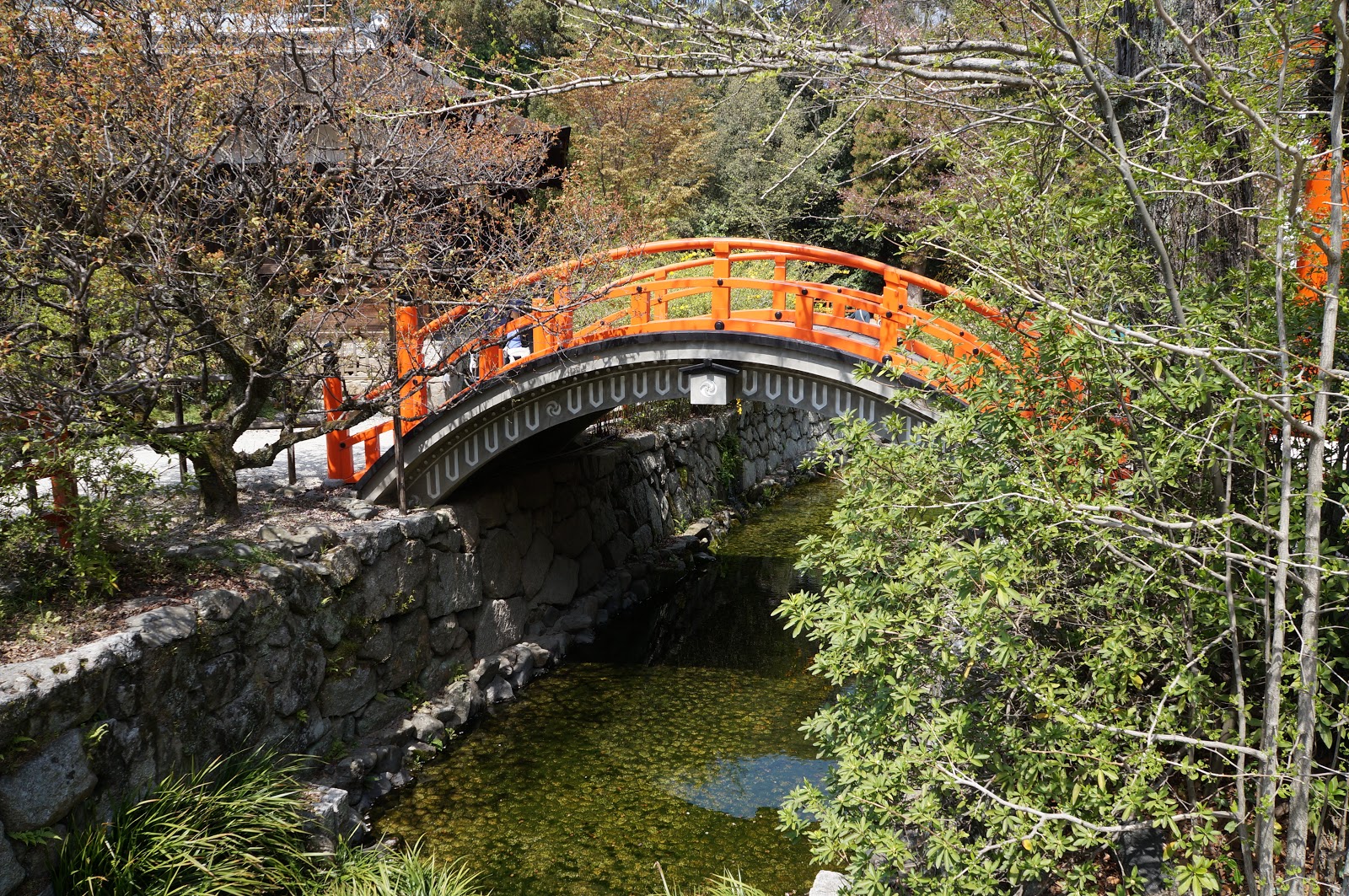 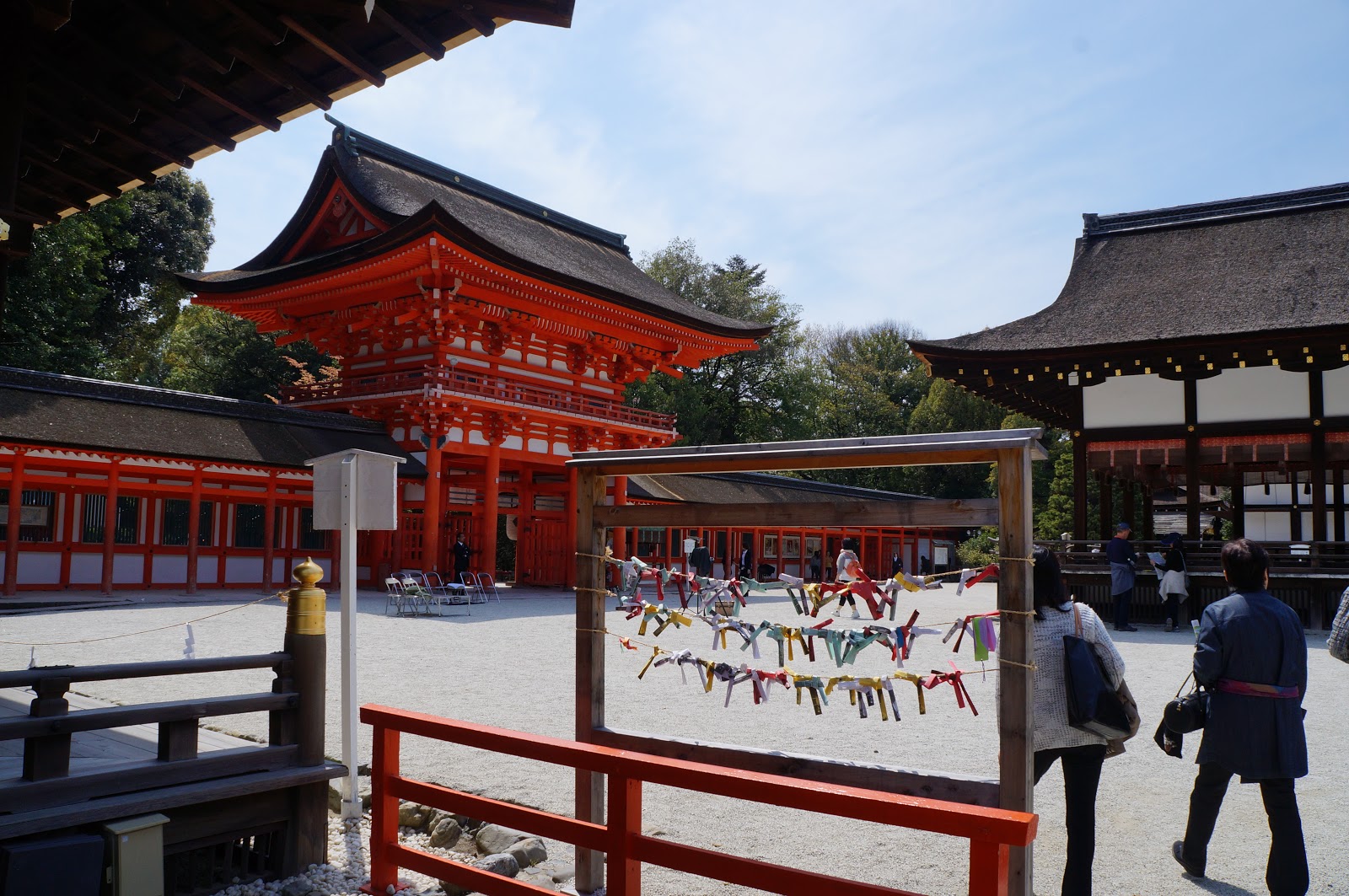 From the Shimogamo Shrine we took a long walk along Imadegawa Dori to the northern end of the Path of Philosophy. The road runs past Kyoto University and the area was busy with bikes, bike shops, quirky stores and real estate agents. We were enticed into one French bakery and emerged with wonderfully soft chocolate swirl rolls. But again we struggled to find lunch. There were Indian curry houses, but somehow everything else was always on the other side of the road to us! 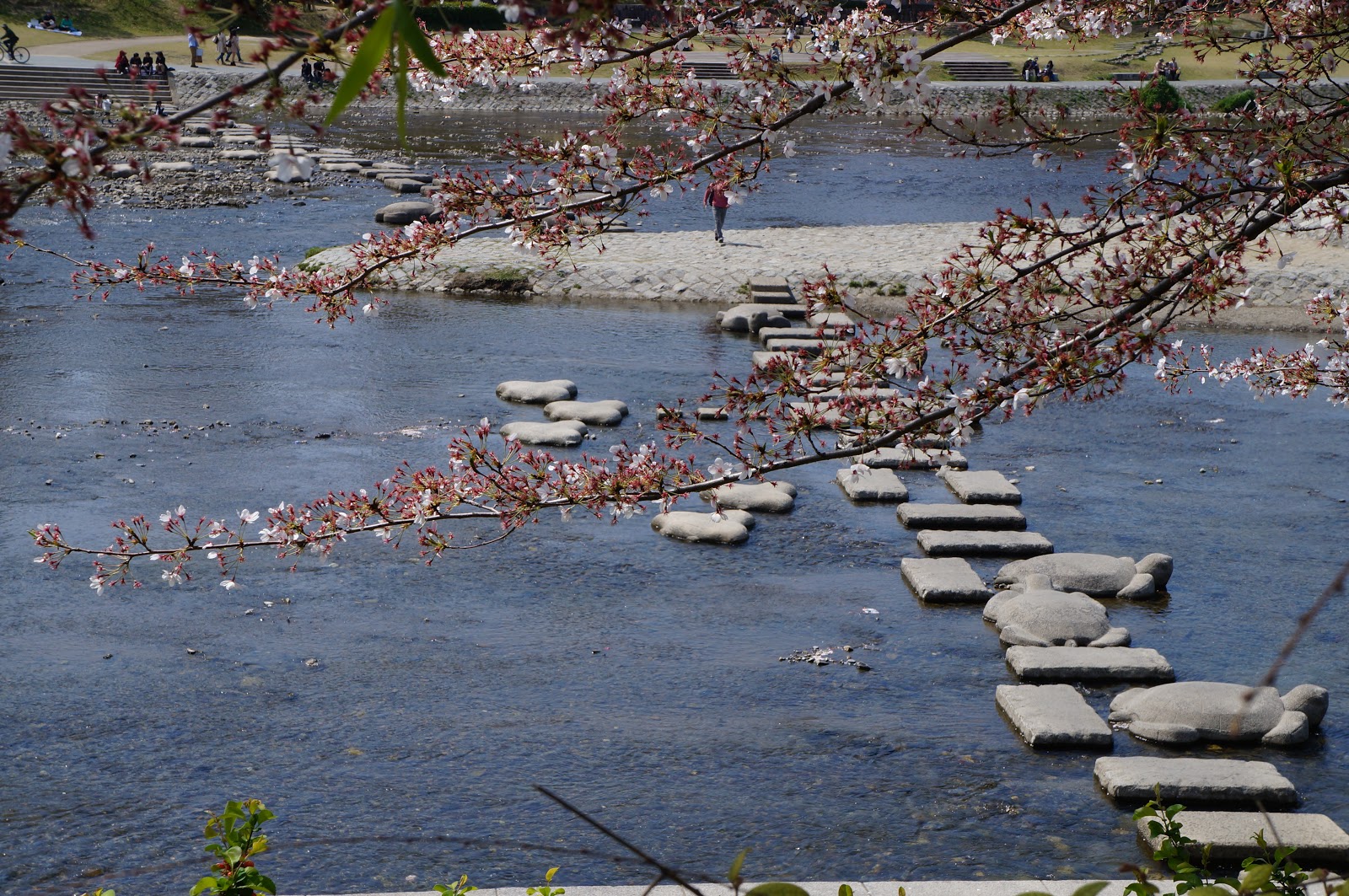 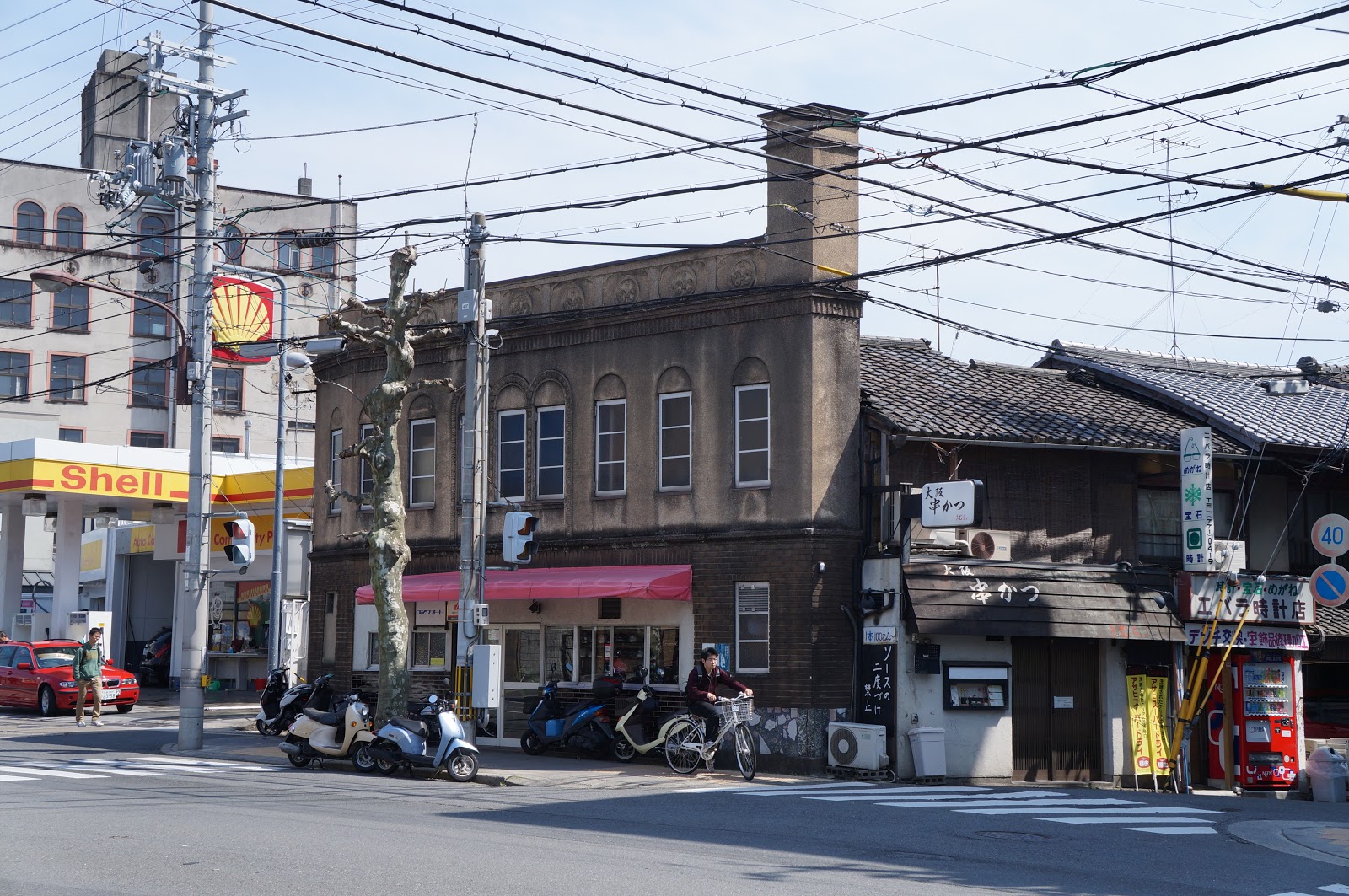 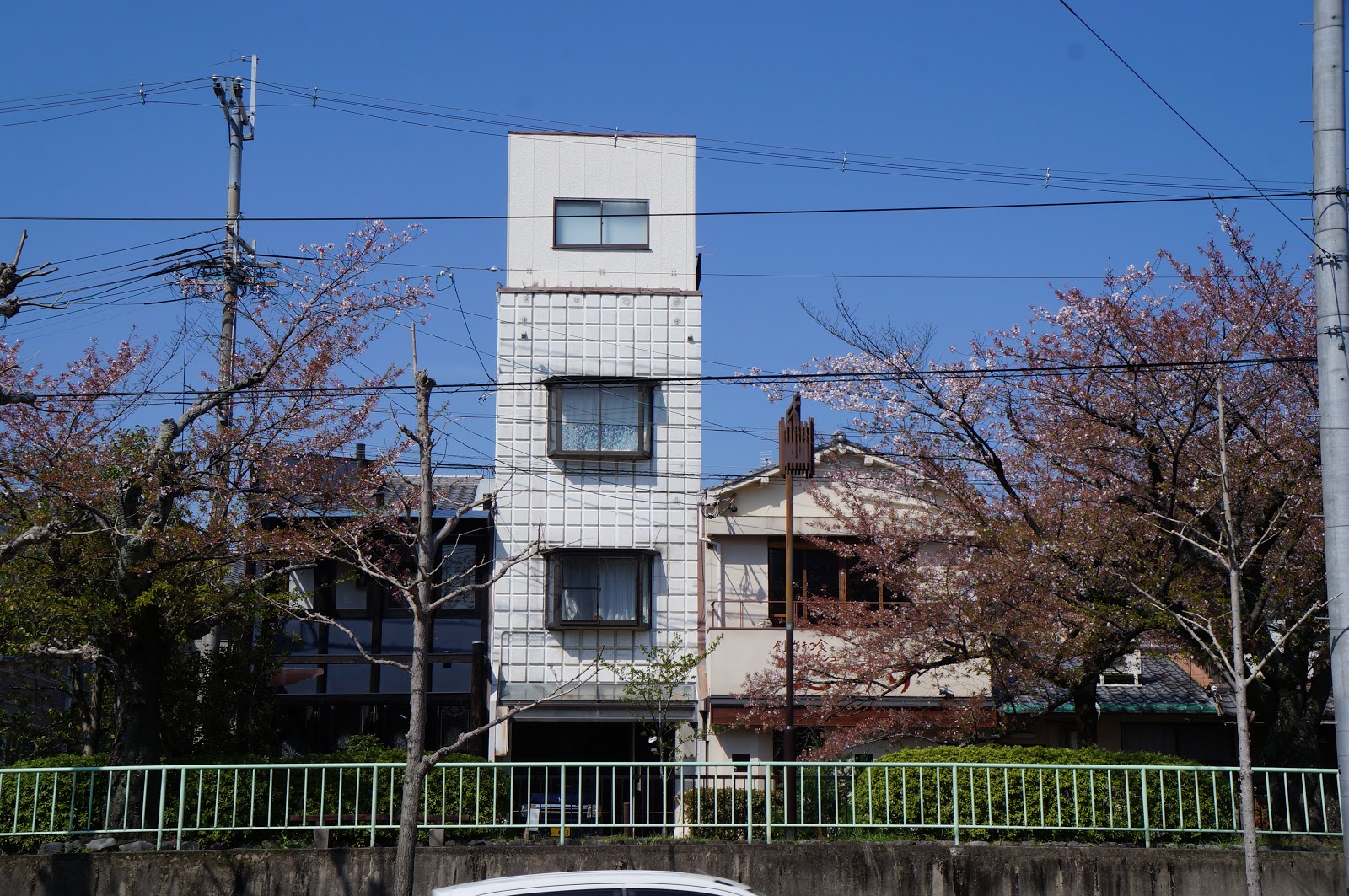 By the end of the long walk we were starving and accepted a lunch of tempura udon and katsudon in a touristy restaurant. Then we joined the crowds outside, some on their way with us up the hill to the Ginkaku-ji temple with us, others along the Path of Philosophy. 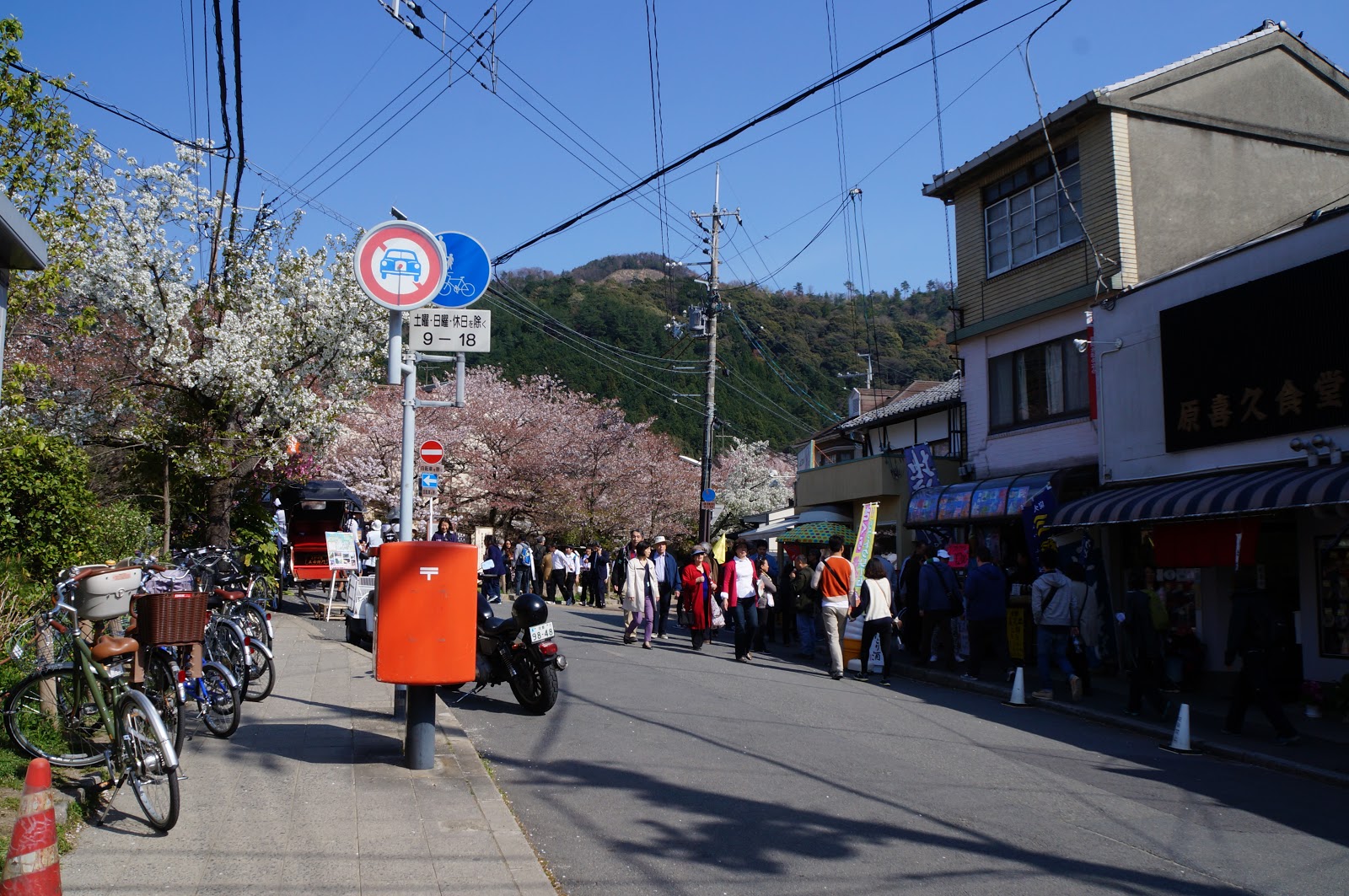 Mum ate a sakura flavoured soft serve ice cream, I had a melon one. No purchasing of any other cherry blossom flavoured treats this trip. For me it is no longer a novelty.

Gingkaku-ji, or the silver temple (Kinkaku-ji has the famous golden pavilion) has a beautiful garden, interesting zen gardens and buildings. The path around the garden winds it way up the hill past a waterfall, beneath maples, conifers and cherry trees, their trunks poking out of a carpet of soft green moss split by thin creek beds. It would have been so serene and contemplative but for the hordes of other visitors. 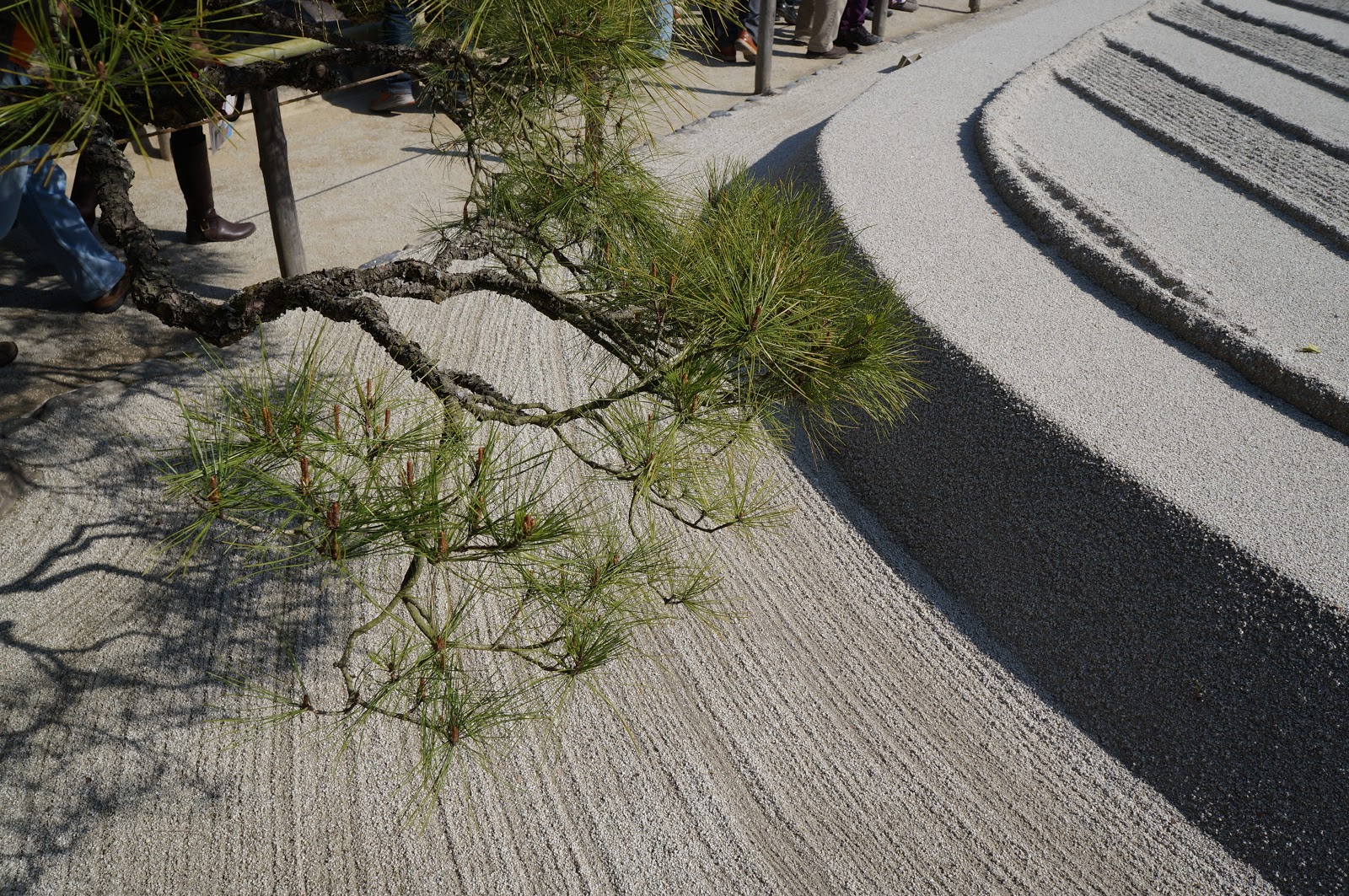 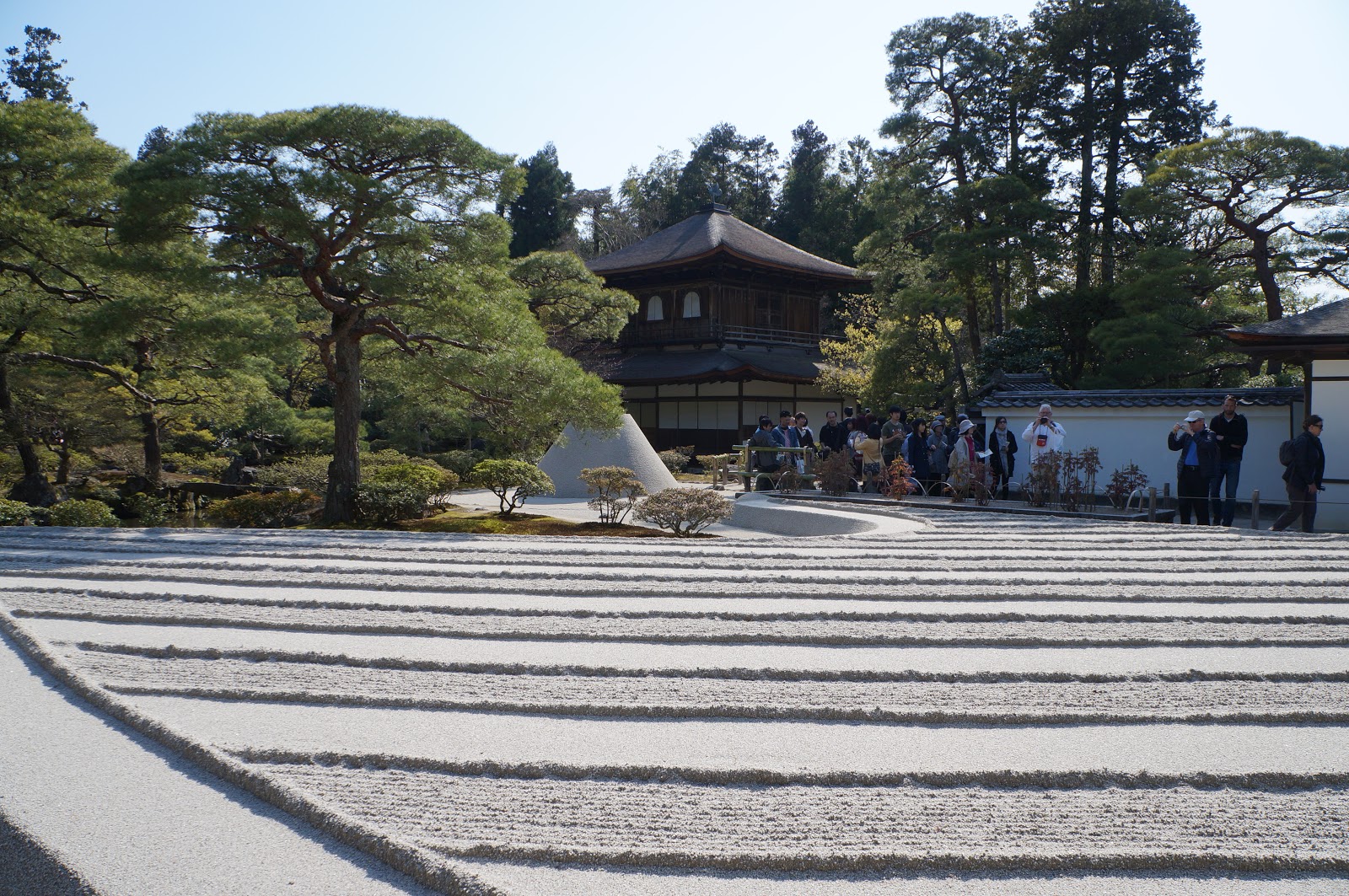 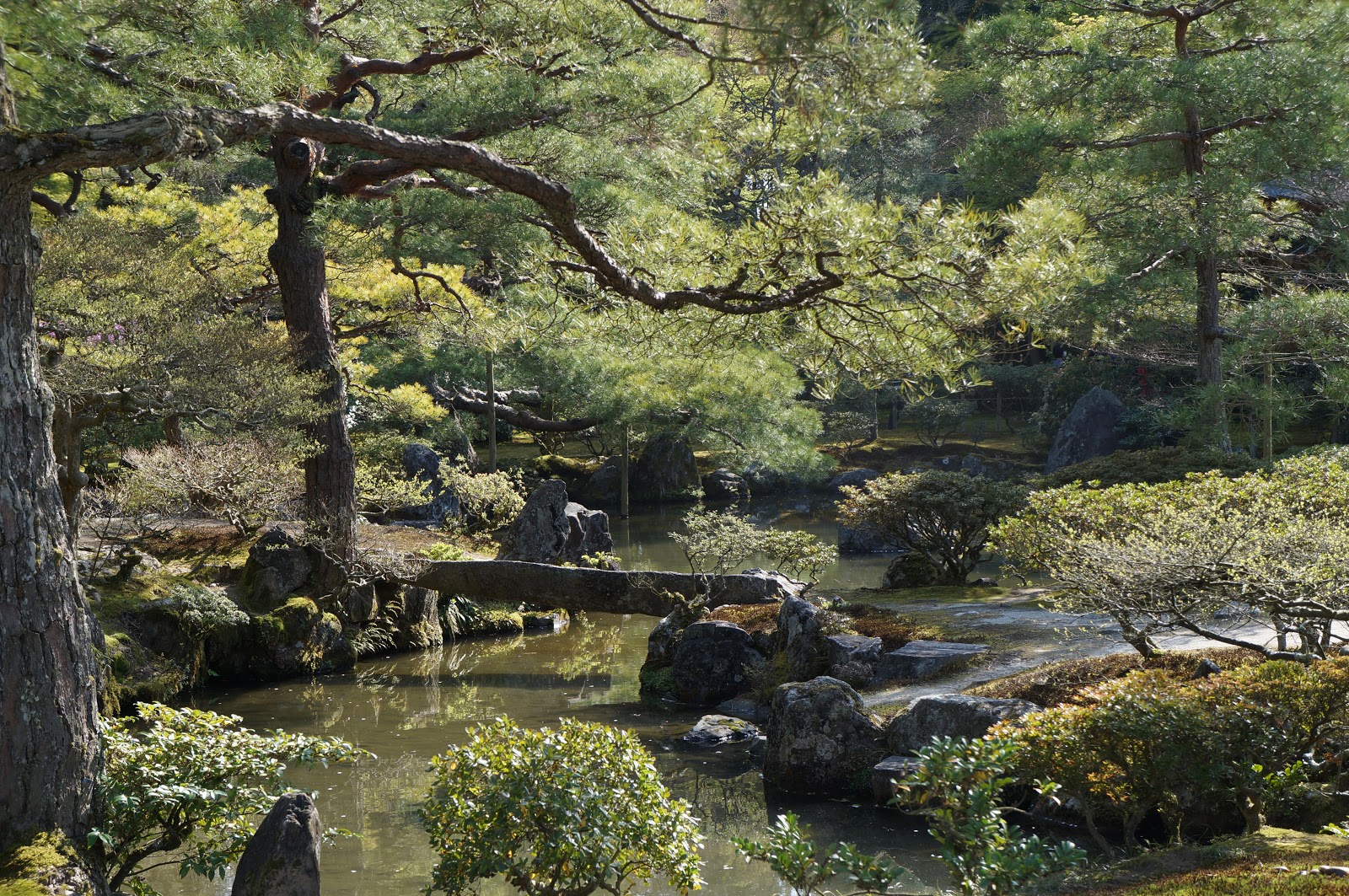 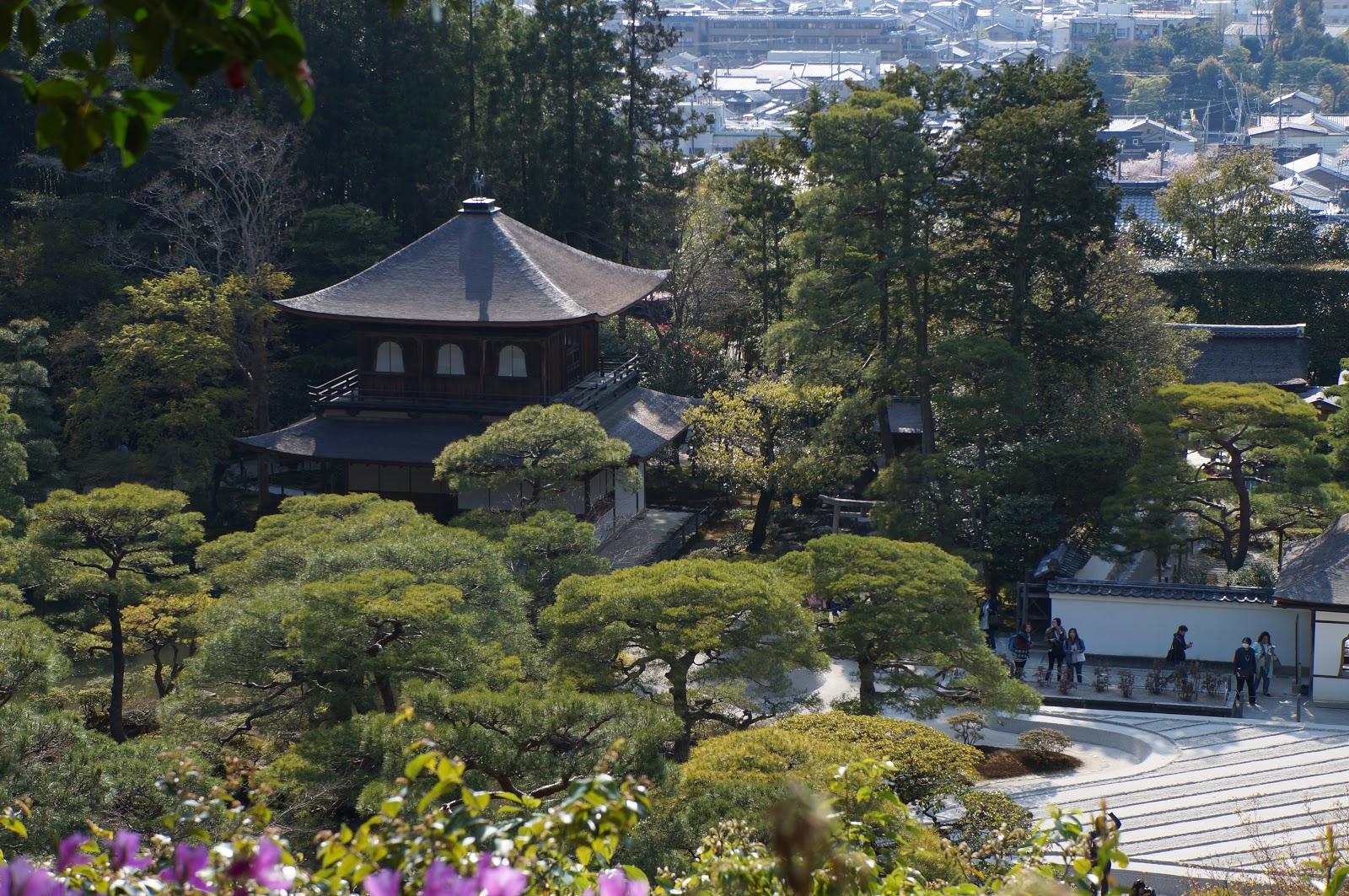 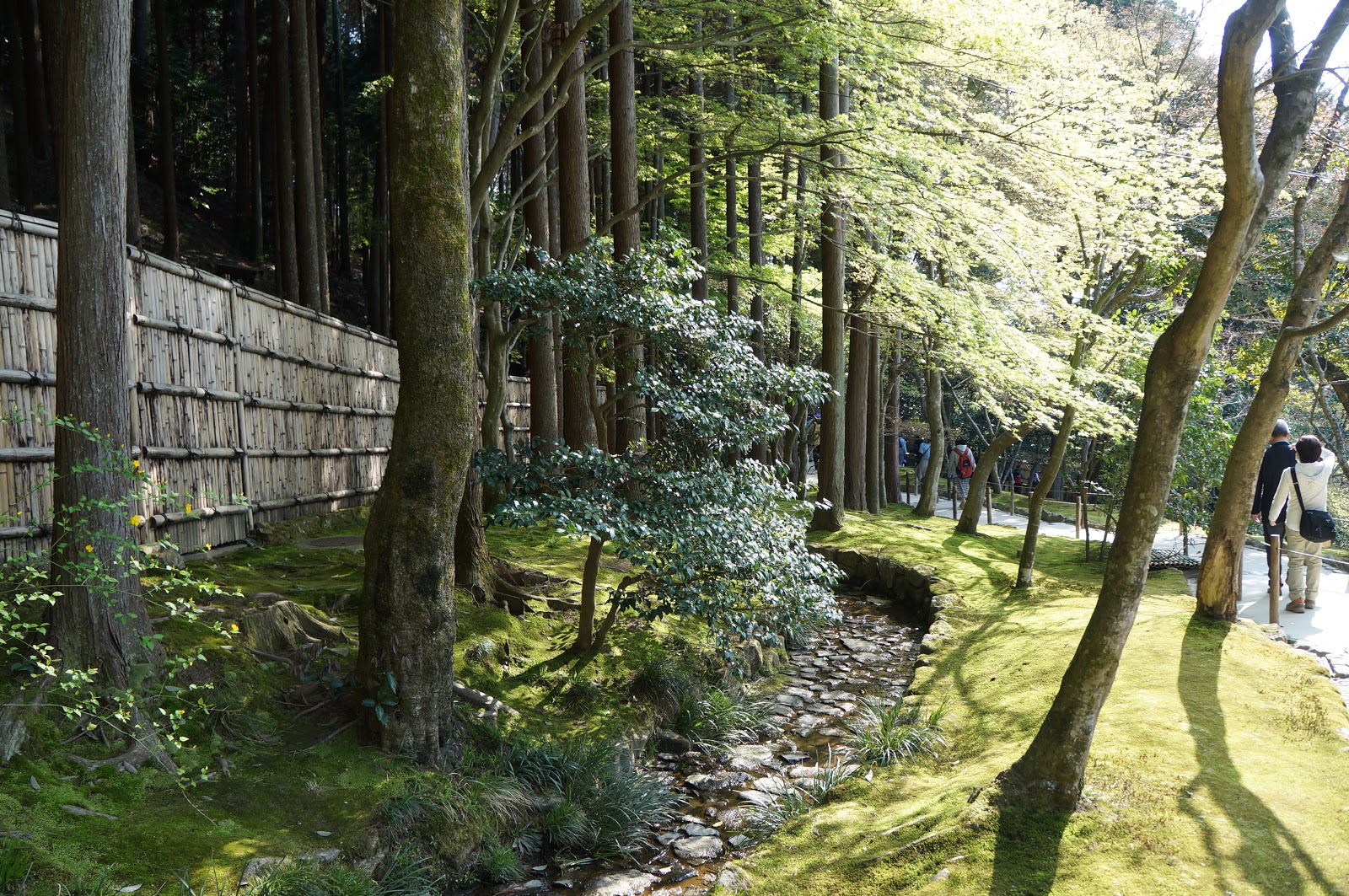 We returned down the street to the Path of Philosophy, a stone path beside a canal running all the way from Lake Biwa that was used to supply one of the first hydroelectric power stations in the world and to transport goods from inland.

The path dates back to the early 1900s and was a favoured trail of a local professor of philosophy and named after another path of philosophy in Germany. It was difficult to get into a philosophical mood under the canopy of cherry trees with the number of others on the same path, especially some noisy Italians, one lady who started singing opera. 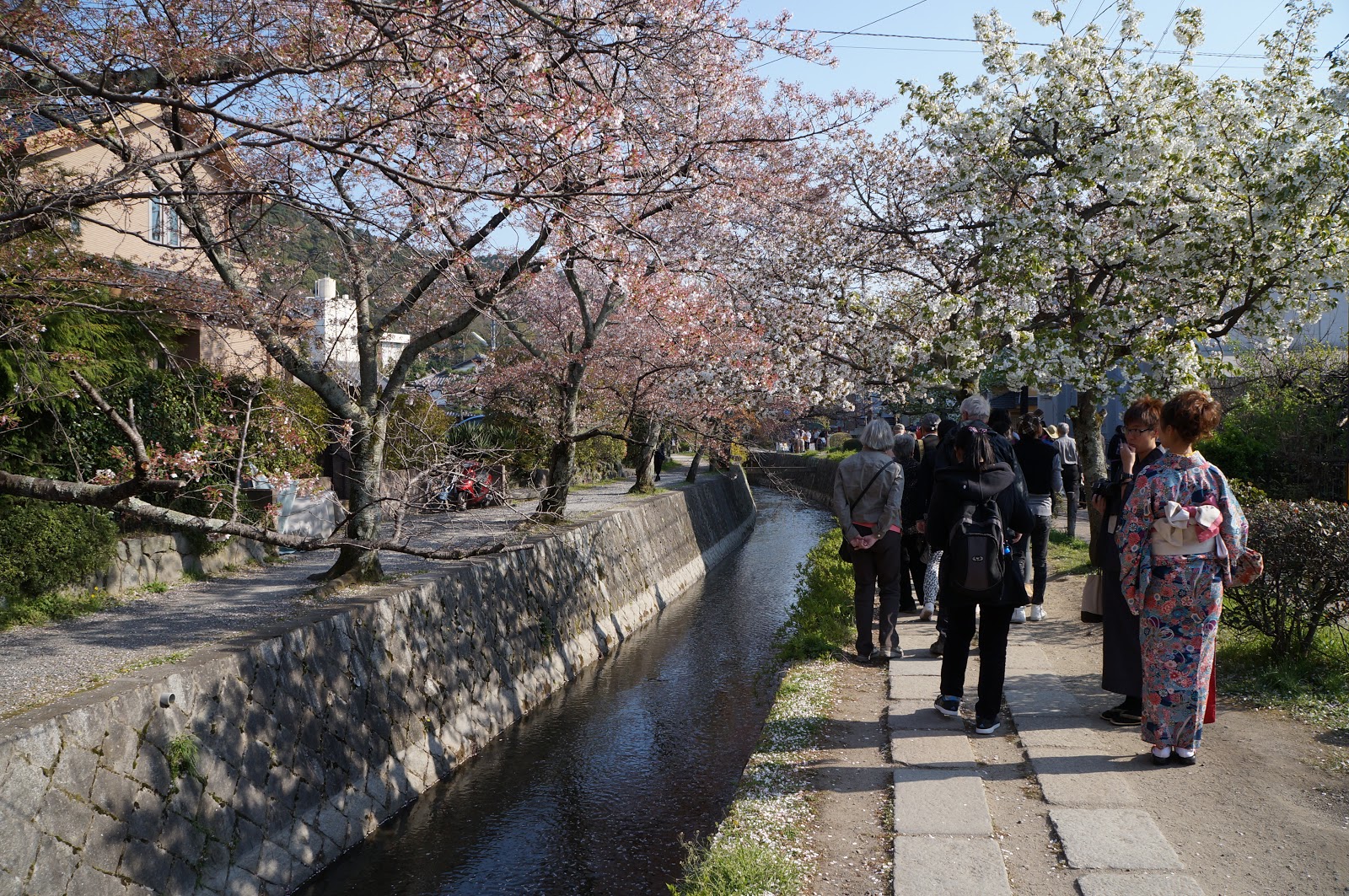 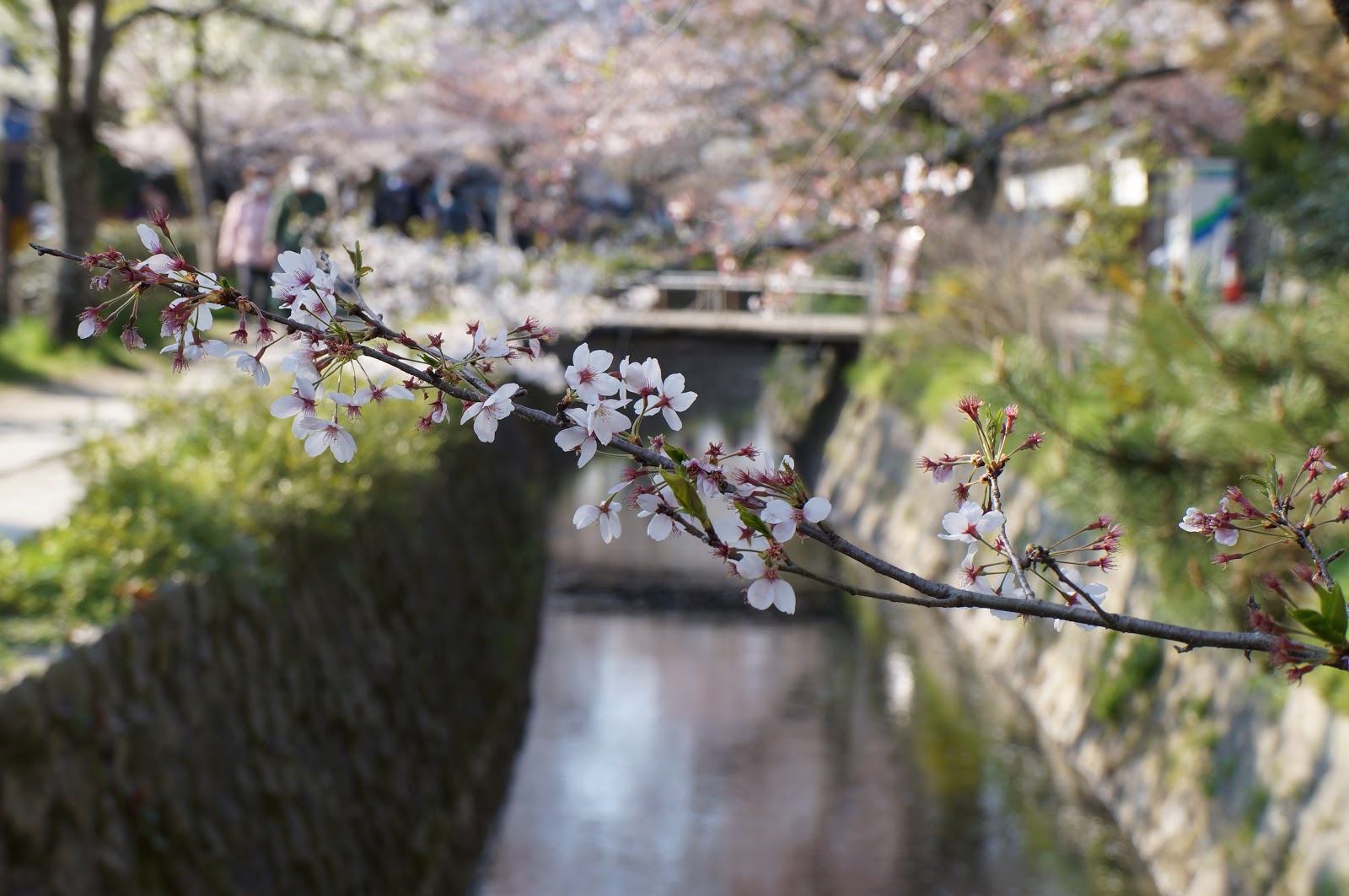 But as the afternoon wore on the crowd thinned out. I've always wanted to stop by one of the little cafes beside the path and today we did, with slices of home made apple and orange cakes. We continued under the dappled and golden late afternoon light, when I've always walked this path before, for it is another of my favourite places in Japan. 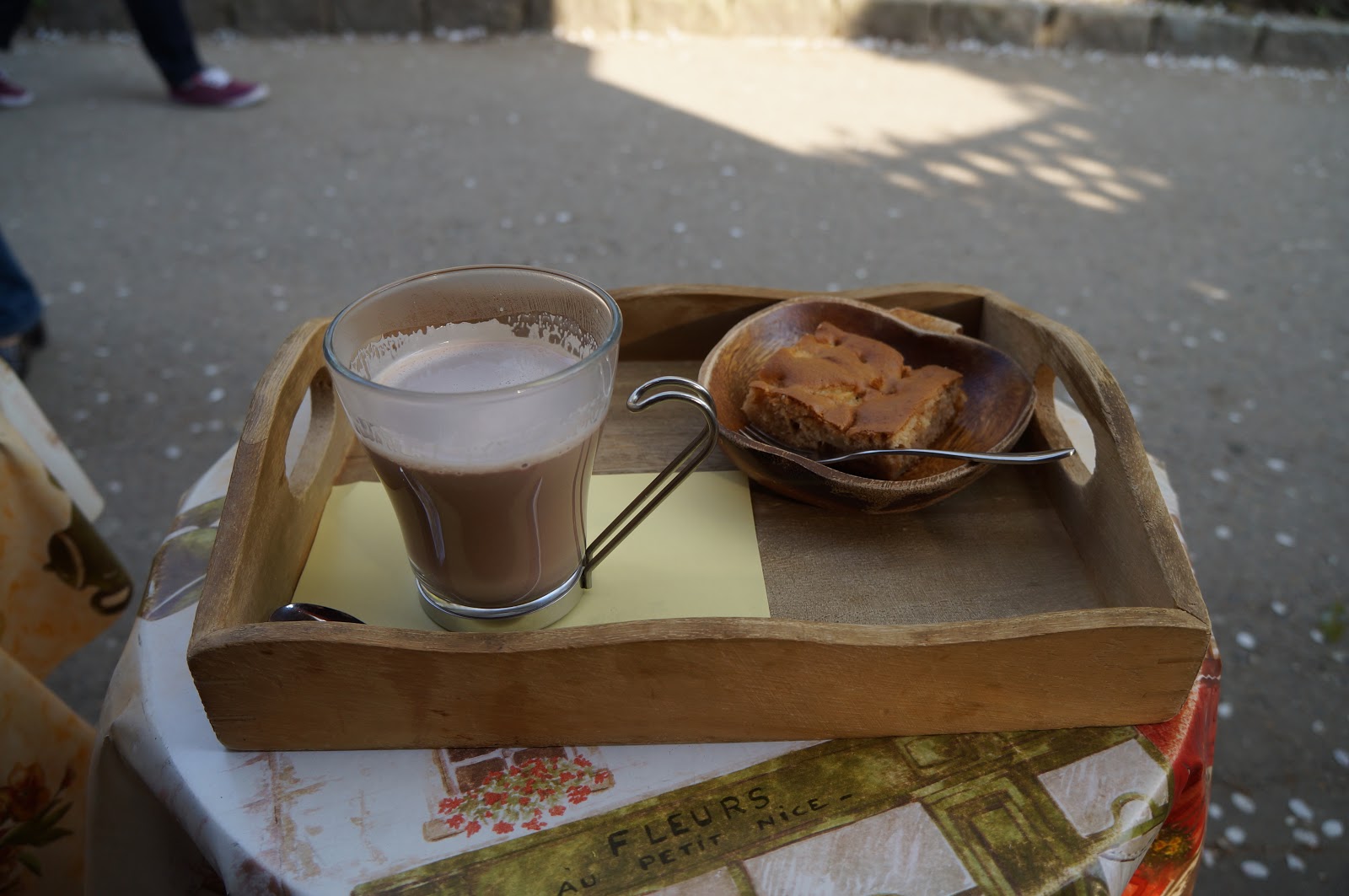 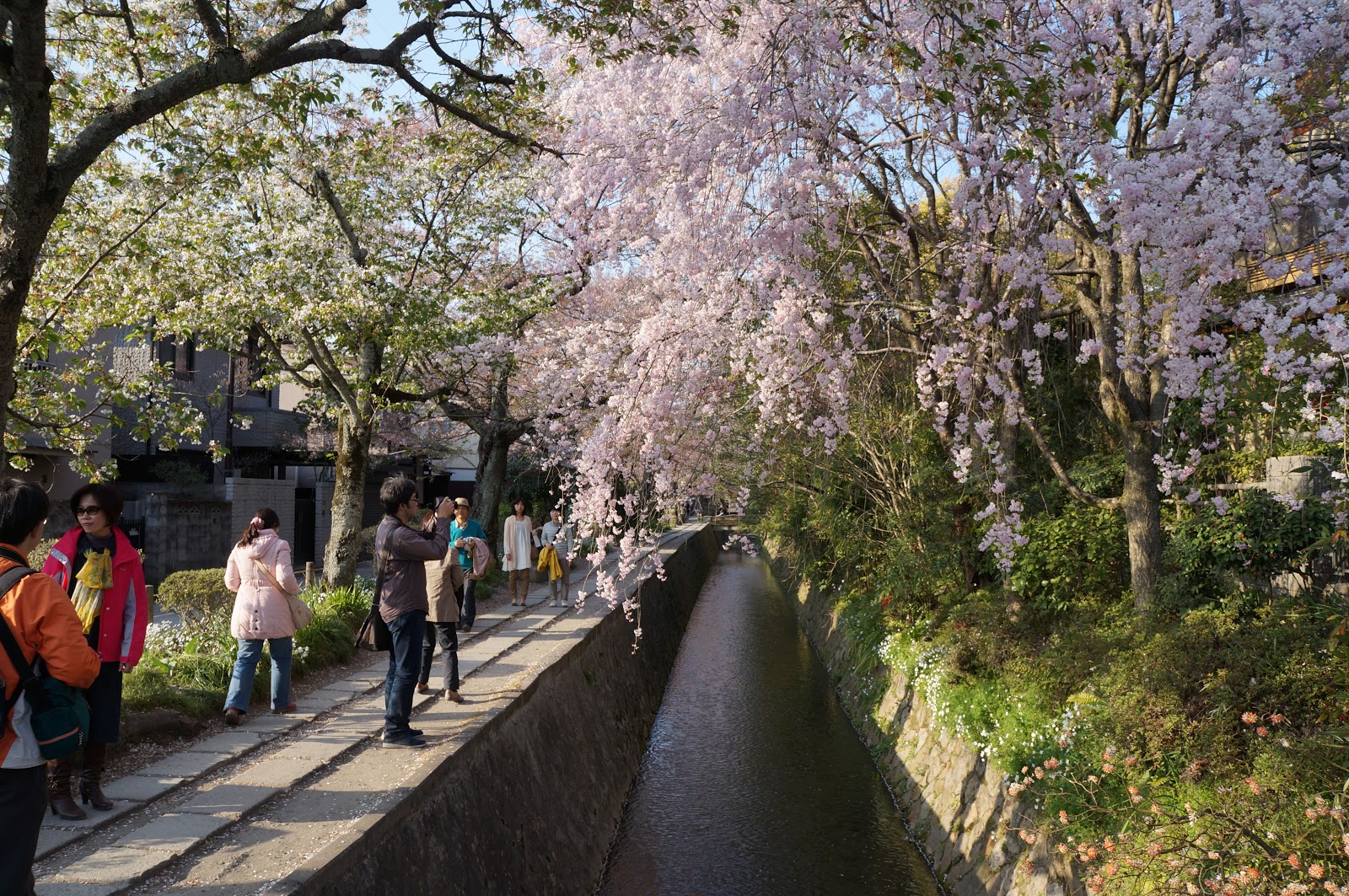 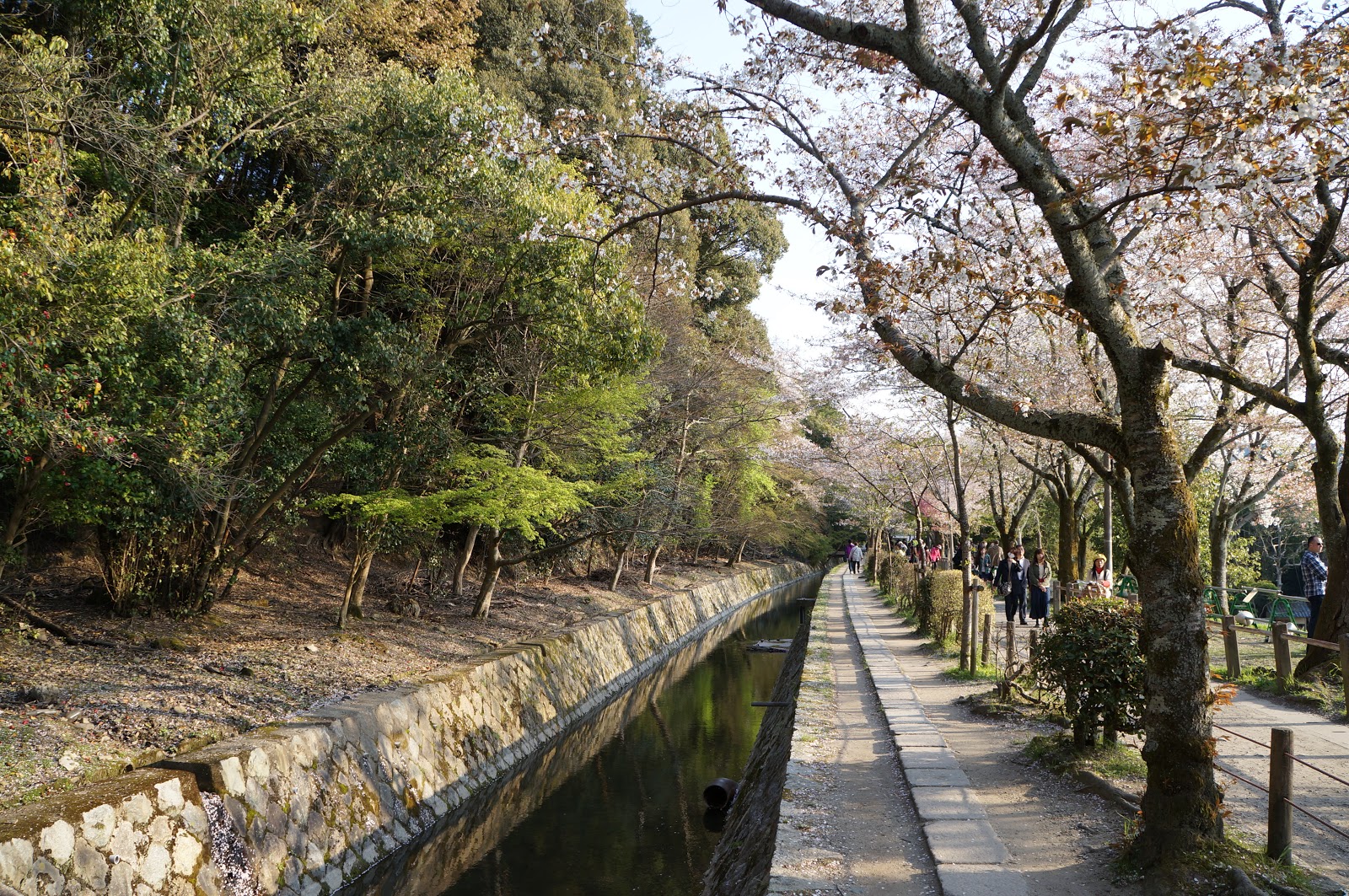 At the end we turned towards the huge wooden gate entrance to Nanzen-ji. Mum was too foot weary to find the pagoda and the canal's aqueduct, but she did see the bottom of the Keage Incline, where boats were taken off the descending canal and lowered down on broad railway tracks to the lake at the bottom. One of the boats was now displayed carrying stores, a more recent addition. 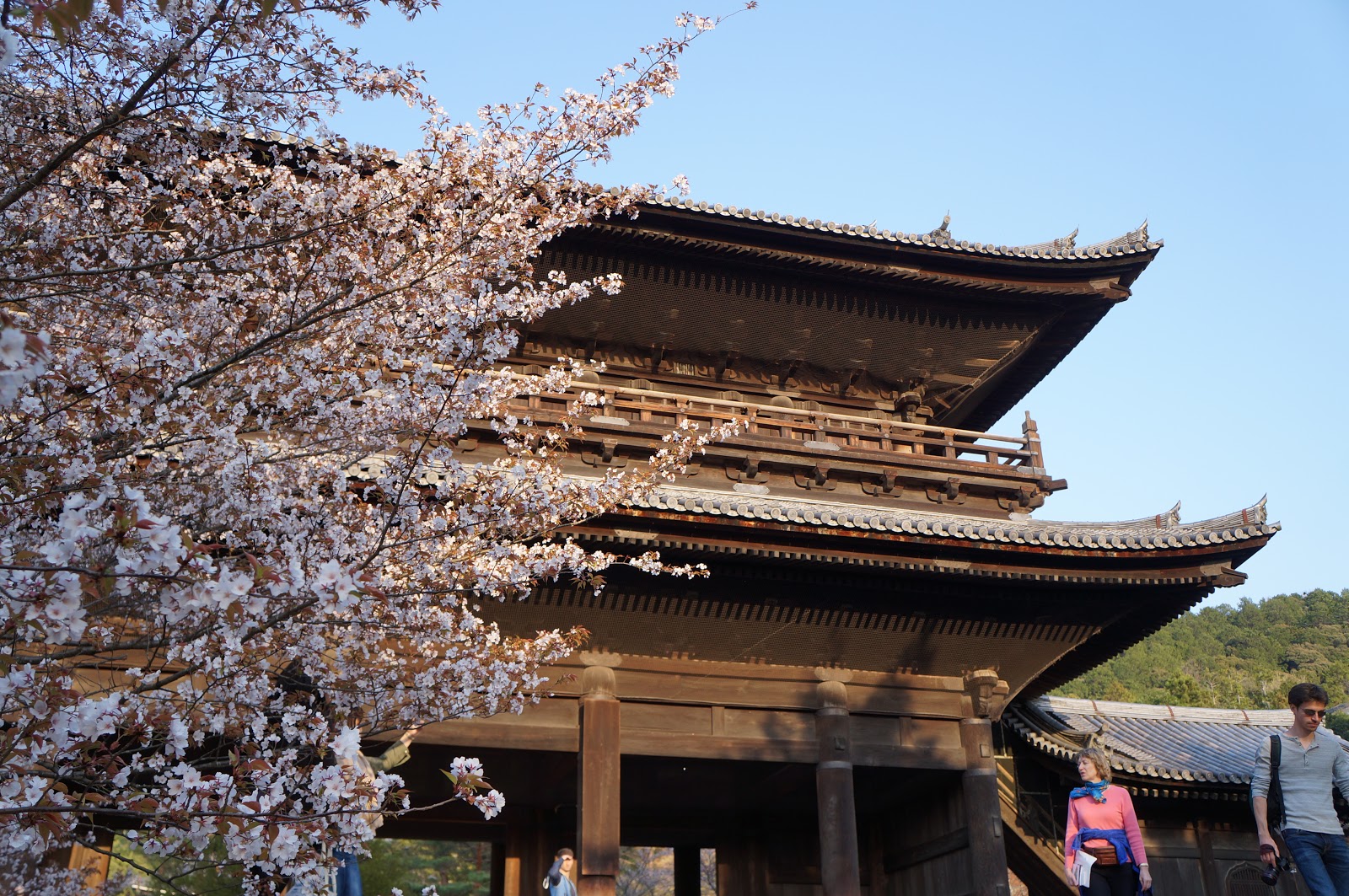 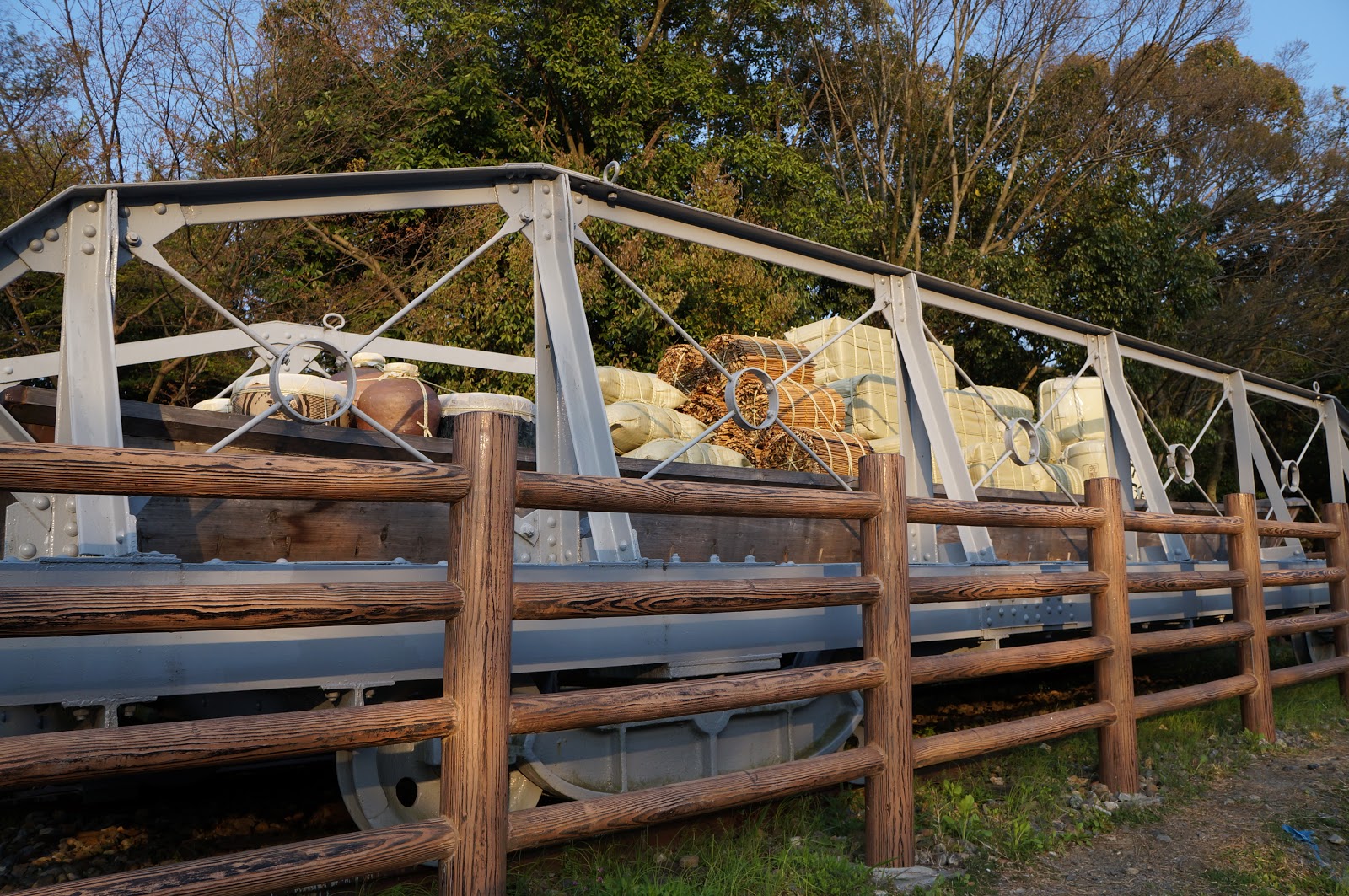 Nearby was Keage Station from where we caught a couple of subway rides to Kyoto Station and on to a Thunderbird Express back to Osaka.

One of the great joys of modern technology was being able to video chat with my family back in Sydney while racing along in a train. I used Google Hangouts on my phone and their iPad and a rented portable wifi router. On the whole it worked pretty well.

Back in Osaka the day wasn't yet over. There was shopping to be done. I took Mum past the fishtanks of the Hankyu Sanbangai arcade and then on to Loft, a store for all sorts of things you never knew you needed. I discovered that they now sold hobby and model railway materials on the top floor, along with a branch of Village Vanguard. Then Mum bought videos from Tower Records while I, for once, bought nothing! 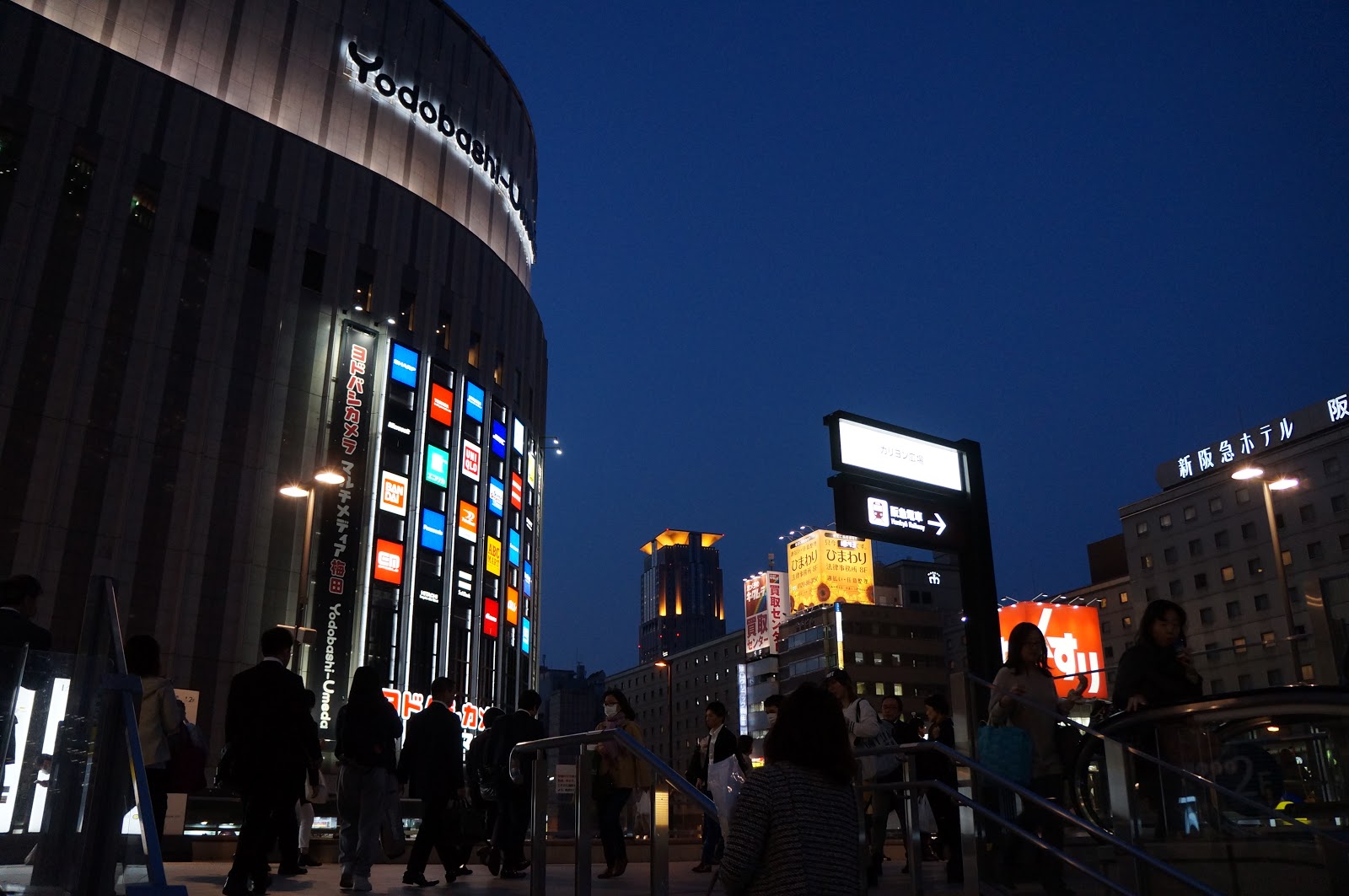 All this shopping meant little time for eating, so I'm ashamed to say that dinner was shrimp burgers at Lotteria. But then you don't get shrimp burgers in Australia.