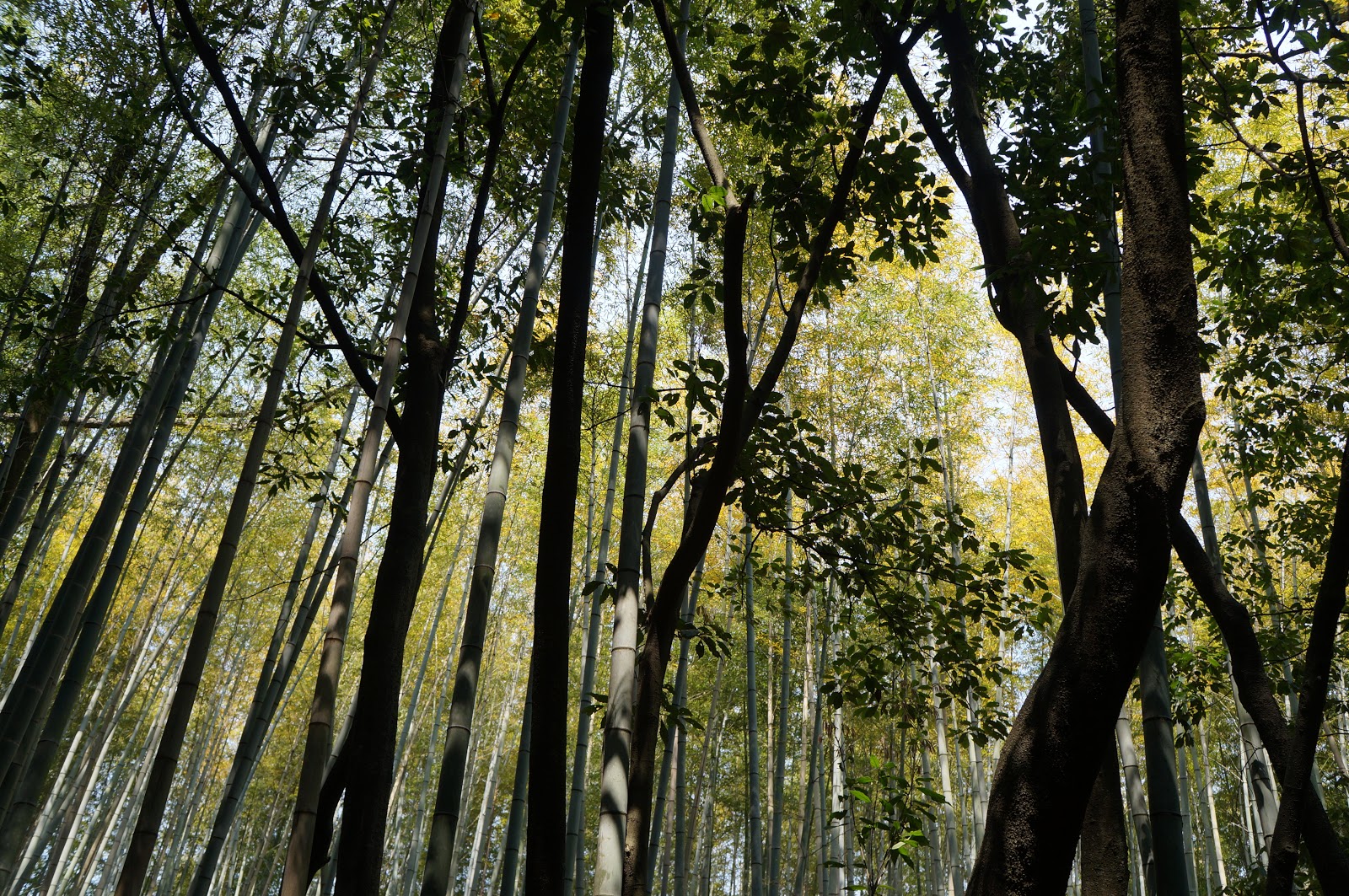 The one place my Mum insisted on visiting were the bamboo forests in Arashiyama, Kyoto. I had to keep correcting her on the pronunciation of Kyoto: K'yo-to, not Ky-o-to (actually the proper pronunciation is with a longer "ou" sound, but then it would look even more confusing).

Unfortunately, accommodation in Kyoto was heavily booked or expensive, so we ended up staying in Osaka, half an hour away. There were a couple of options to Arashiyama from our area, the Hankyu private line or JR. Having a JR Pass made the decision easy and we caught a train to Kyoto station, then changed to another train to Saga Arashiyama.

Having just visited the area in October last year and about four years before that I was not in a loitering or deep exploration mode. Sure there are many other temples and sights to explore in the region, but I had a list of things to show Mum and only a limited time to see them.

We began at the Tenryu-ji Zen temple, which is also the entrance to the famous bamboo grove. The temple hosts an impressive garden, made all the more colourful by flower cherry trees, azaleas and camellias. We spent a long time exploring the grounds, admiring the flowers. 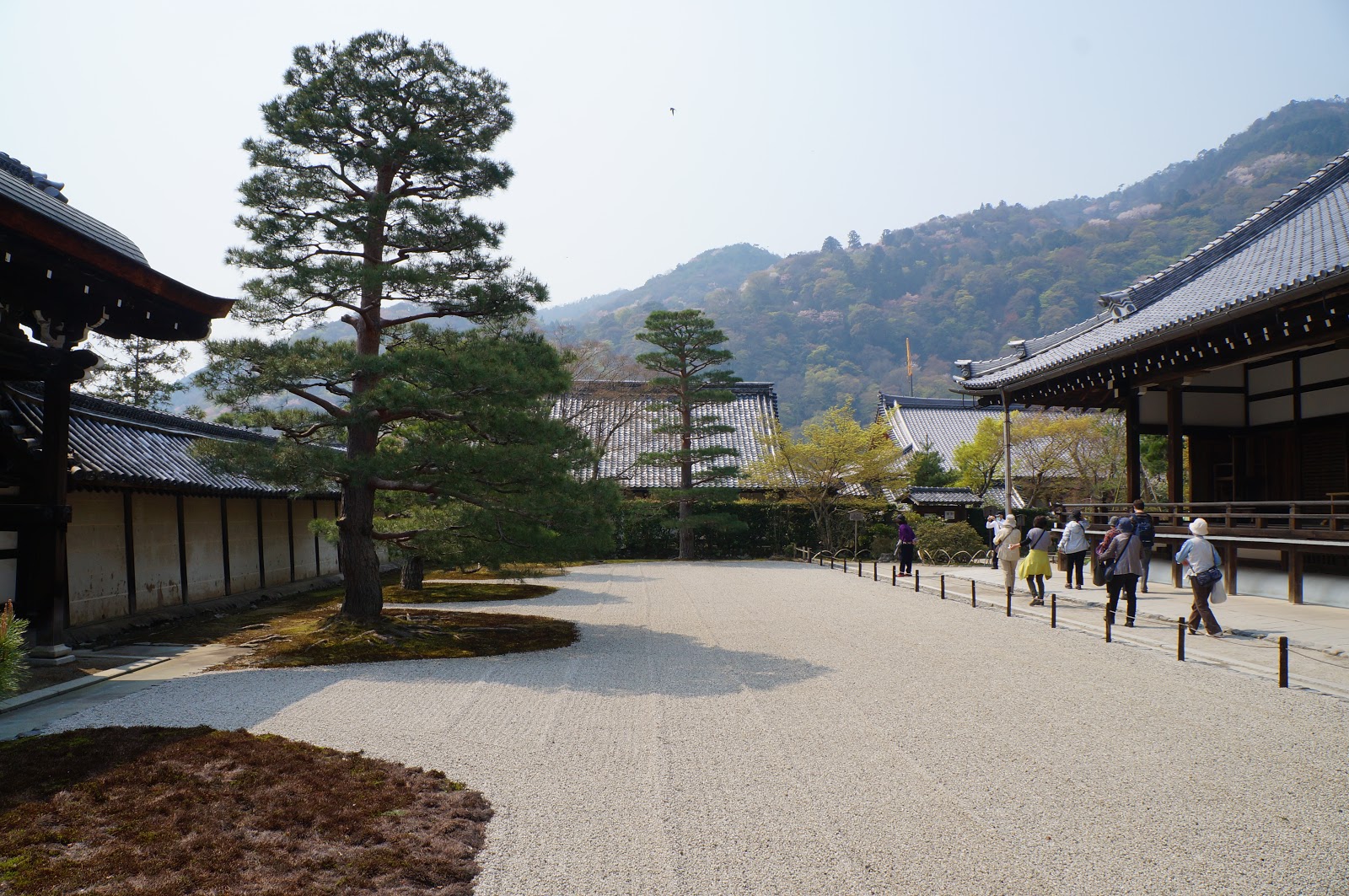 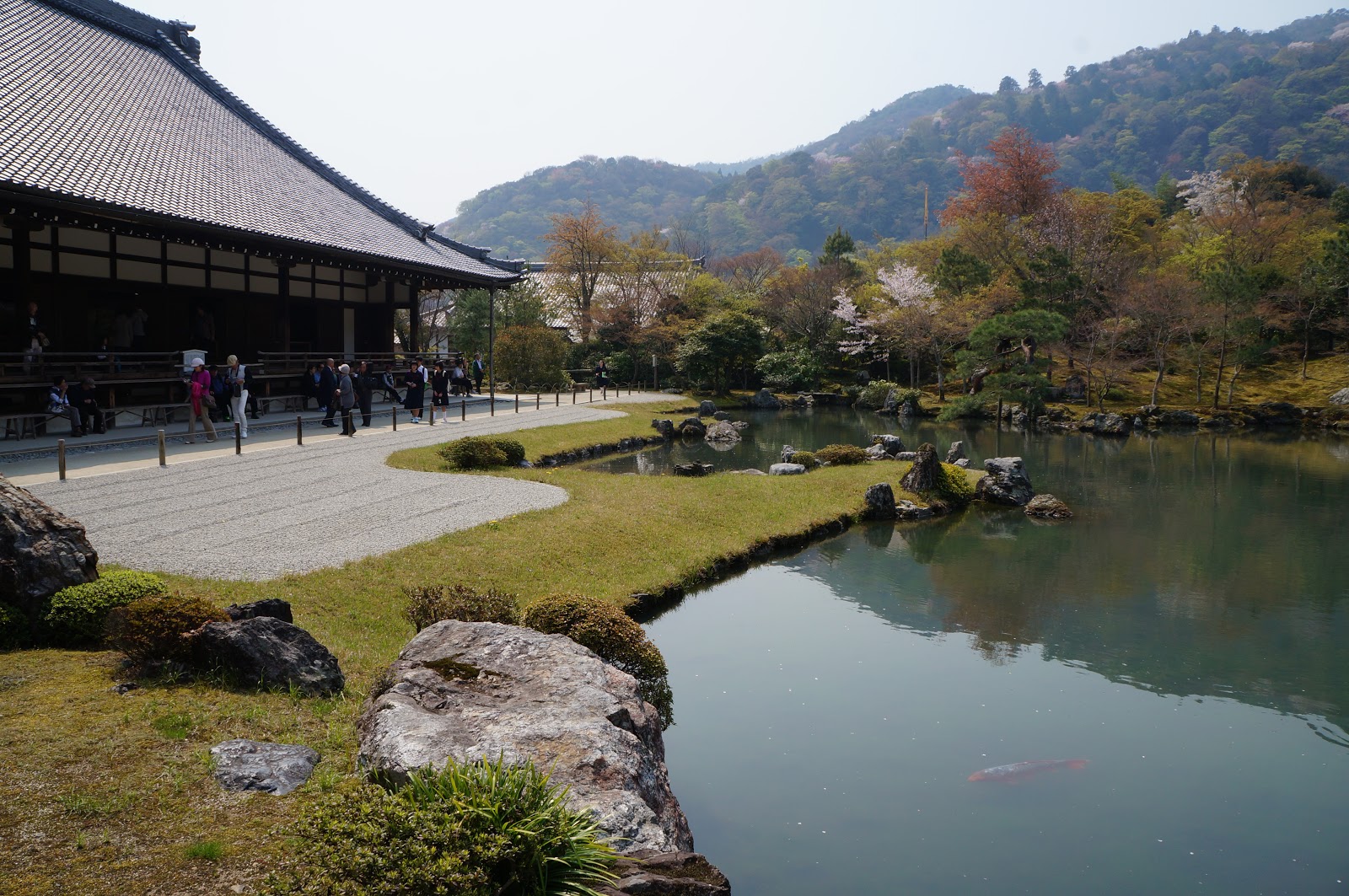 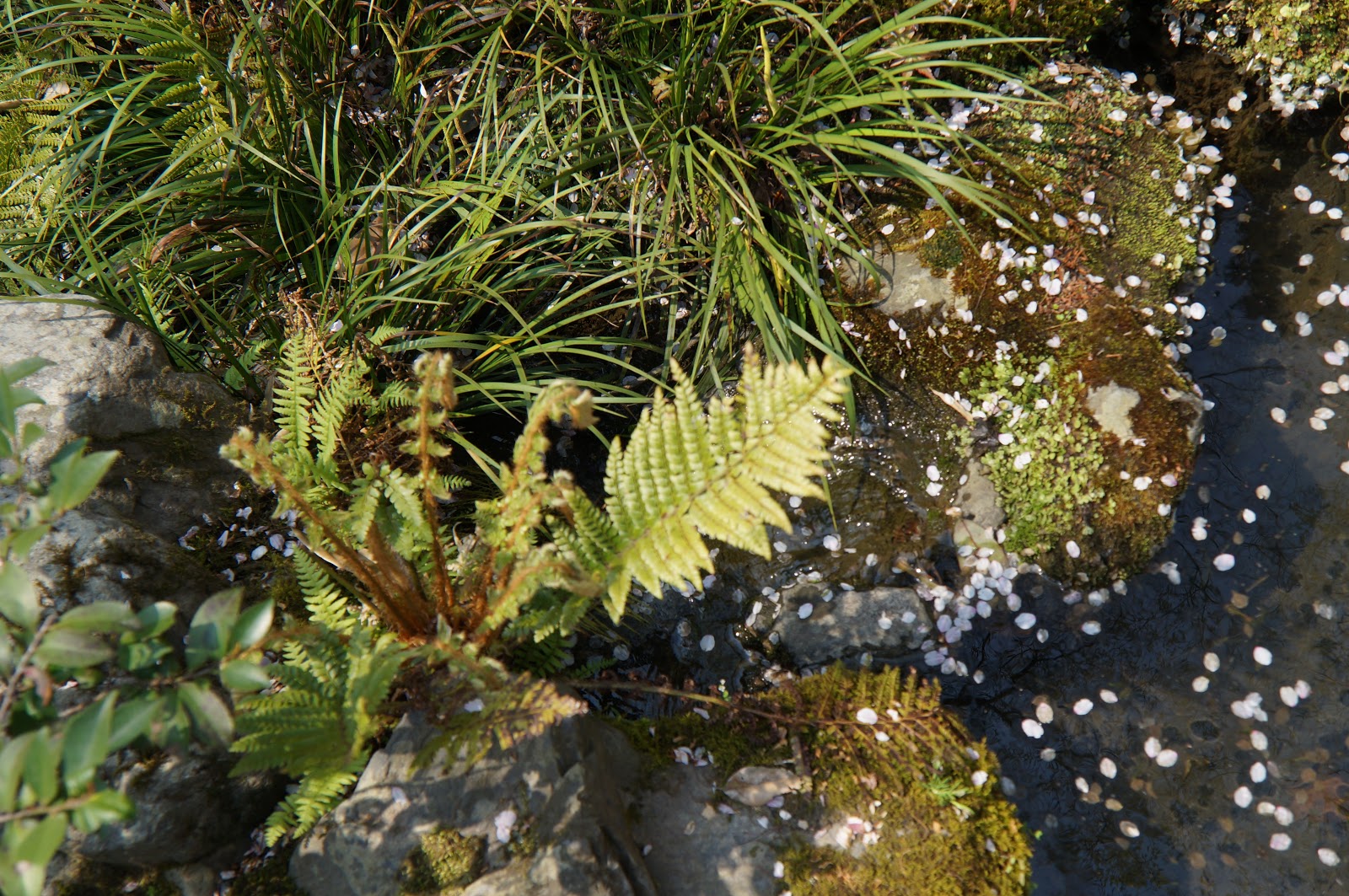 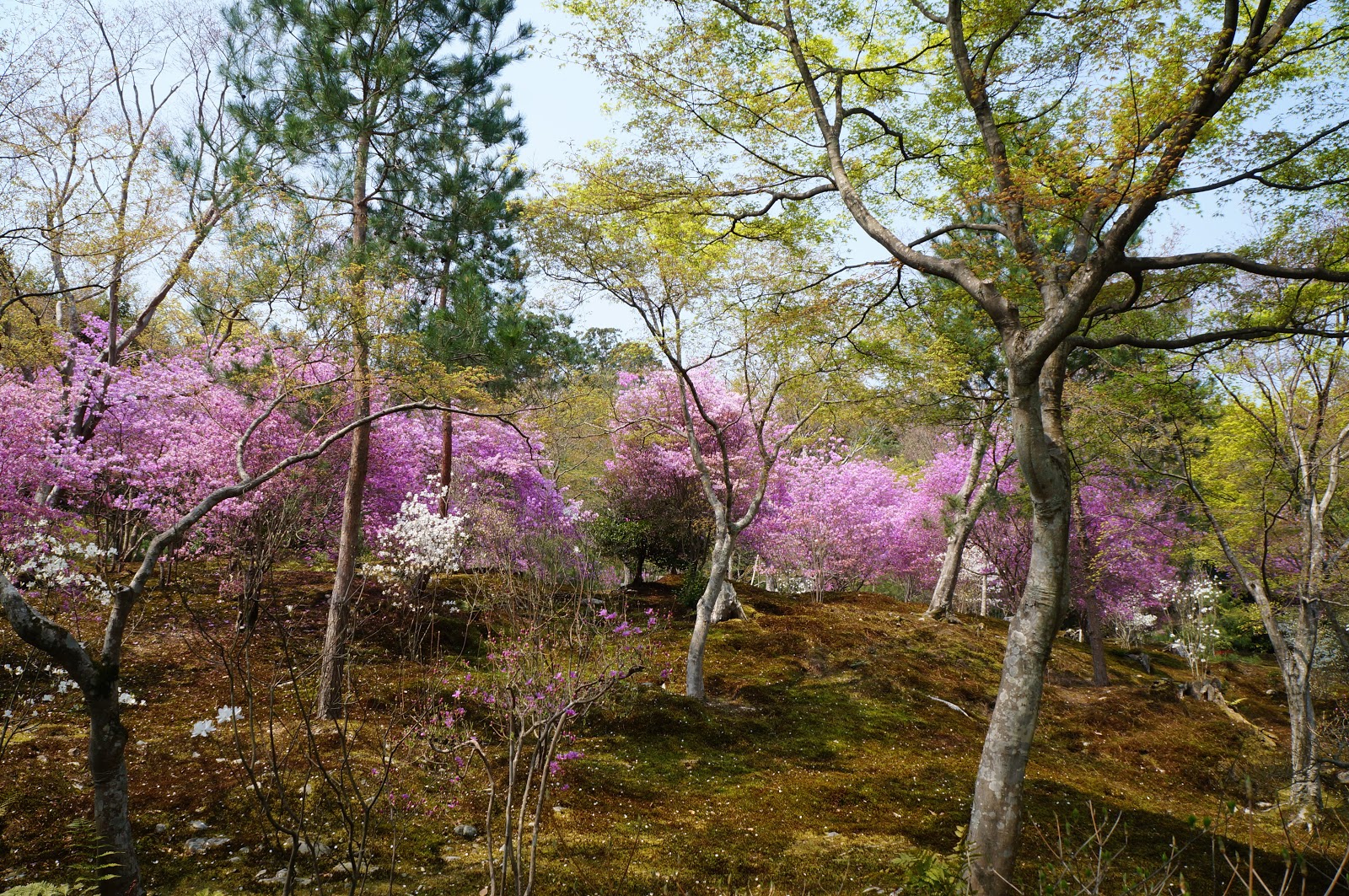 Then it was time to enter the bamboo forest along with crowds of other tourists photographing and being disturbed by the odd car driving up the path, carrying passengers too important, perhaps too old to walk. The photographs fail to convey the sense of atmosphere from the dappled light filtered through the high vegetation, the knocking sound of the hollow stalks bumping each other in the breeze. 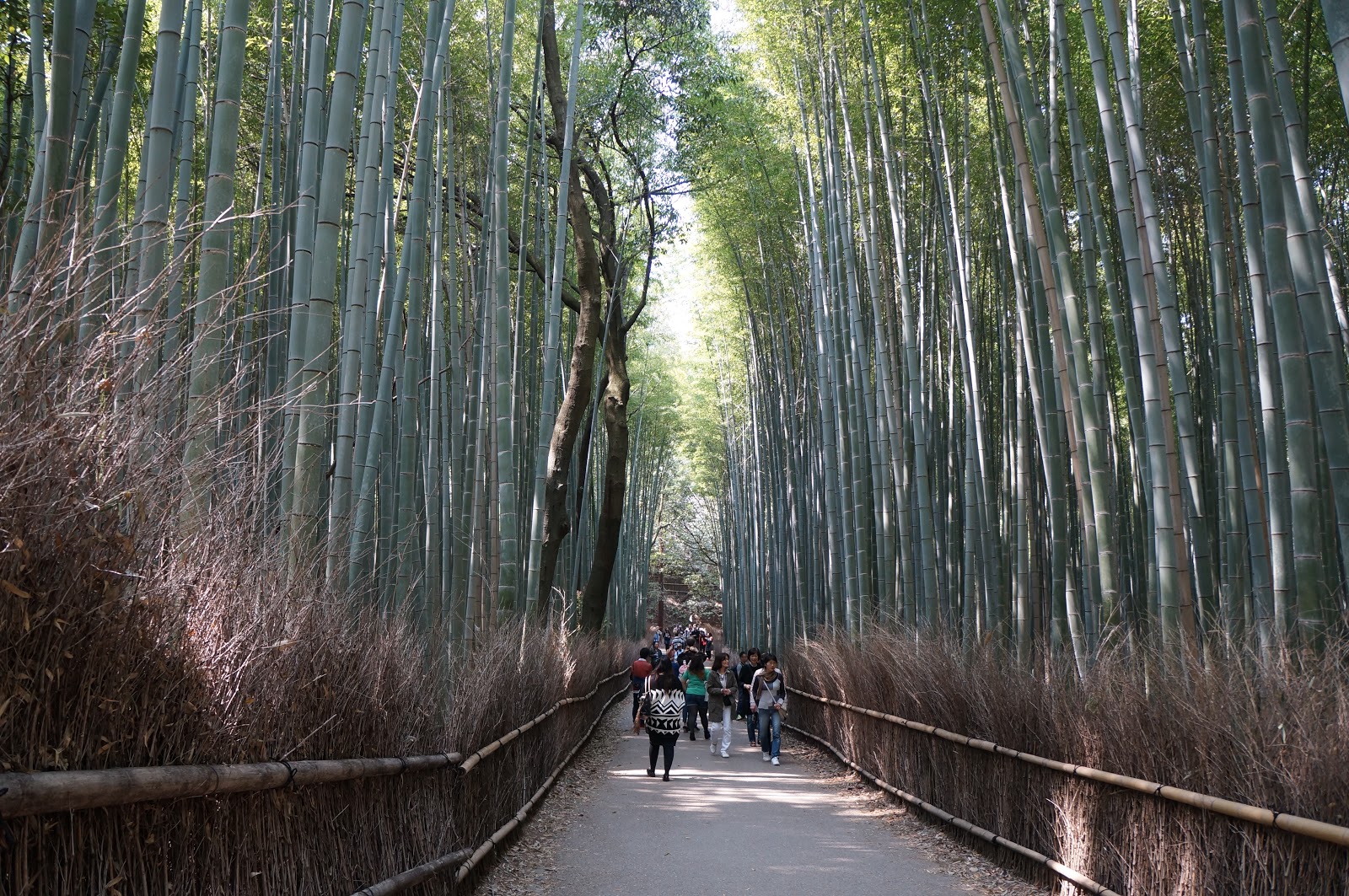 For reasons of time and my Mum's tired legs we returned down the path of the grove, bypassing Tenryu-ji and out to the main road. Mum annoyingly shoved her camera in each shop window, something you dare not do in the more aggressive shopping cultures elsewhere in Asia.

We walked the street searching for food to try until we came to the river and the causeway bridge across it. 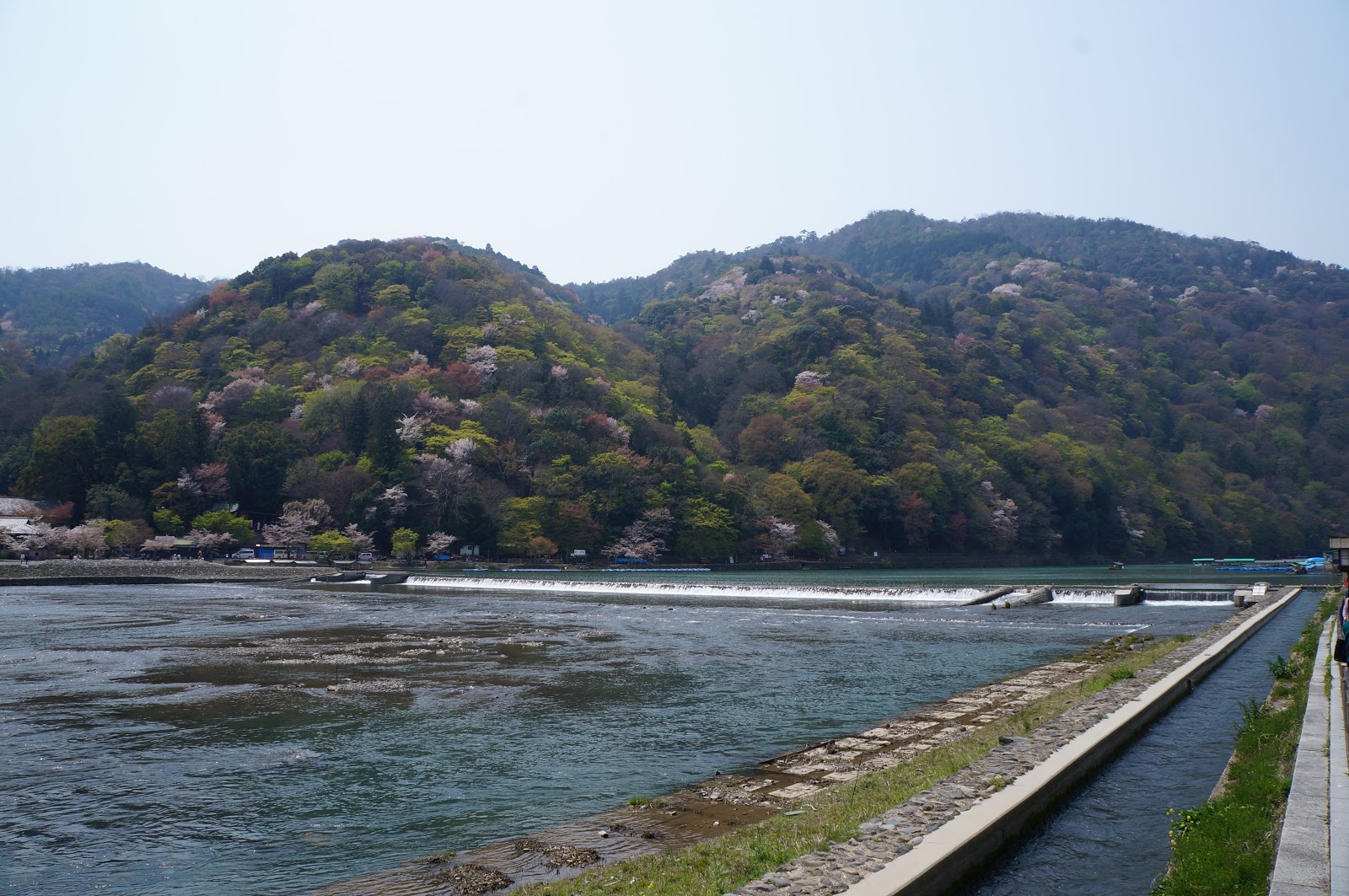 Hoping to see more of Kyoto, I dissuaded Mum from crossing it and we returned to the Randen Arashiyama station to catch the last trams of Kyoto back towards the city centre, but not before buying some dried strawberries first. 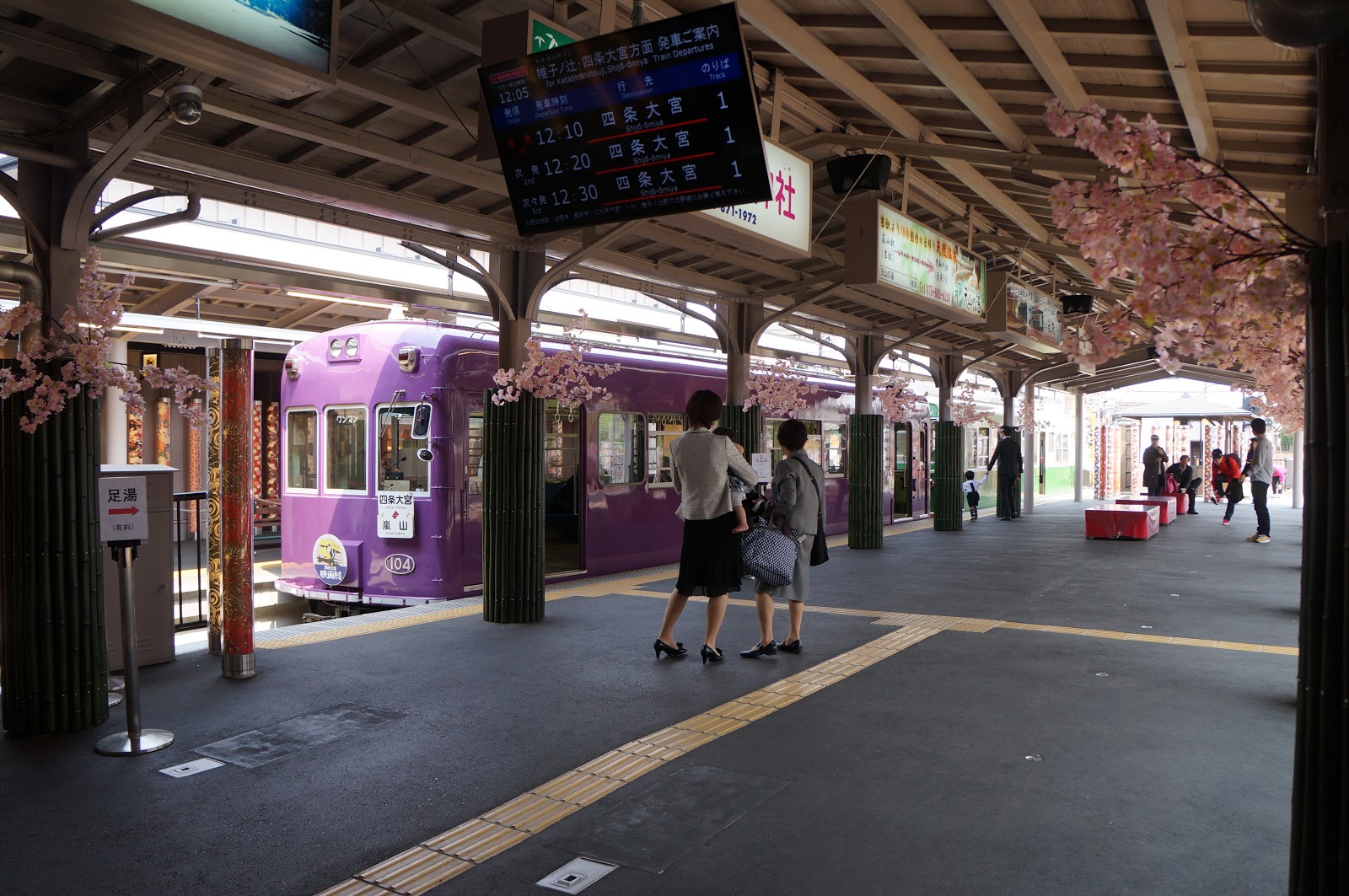 I think Mum enjoyed the quaint tramcar experience, as did I. It was a mode of transport with a lot of personality and an insight into street life in Kyoto. We rode the Randen all the way to its terminus at Shijo-Omiya, whereupon we set off looking for lunch. Near the Hankyu station entrance across the road were the burger joints, the McDonalds and the Lotteria. But surely there was something nicer?

The place that presented itself was a small okonomiyaki restaurant. Now okonomiyaki is Osakan food, not Kyoto cuisine, but we were very hungry. Unfortunately, they did most of the cooking of these cabbage and egg pancakes/pizzas in the kitchen and then served them on to the hot plate at the table. Still, it was good food that satisfied. 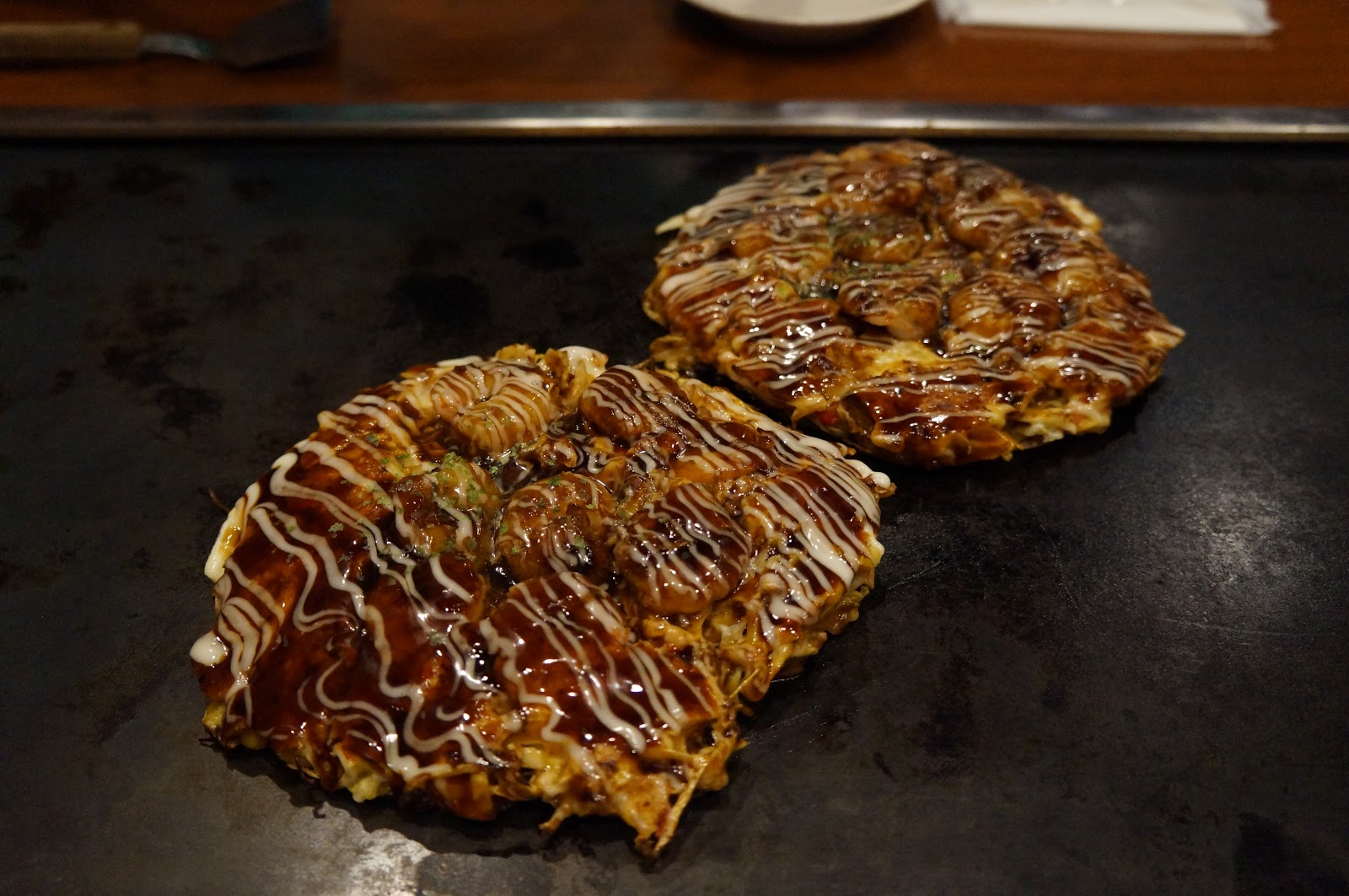 Looking at the map I saw that we were not far from Nijo Castle, somewhere I'd never been and somewhere, with its wood panels, that Mum would probably enjoy visiting. Our walk there took us past small shops and houses. At one Mum bought a very cute little child's hat.

Further on was a covered arcade. During my travels across Japan I have rarely seen a suburban or smaller city arcade that didn't look rundown, half empty or filled with shops that look as if they see few customers. This was no different. 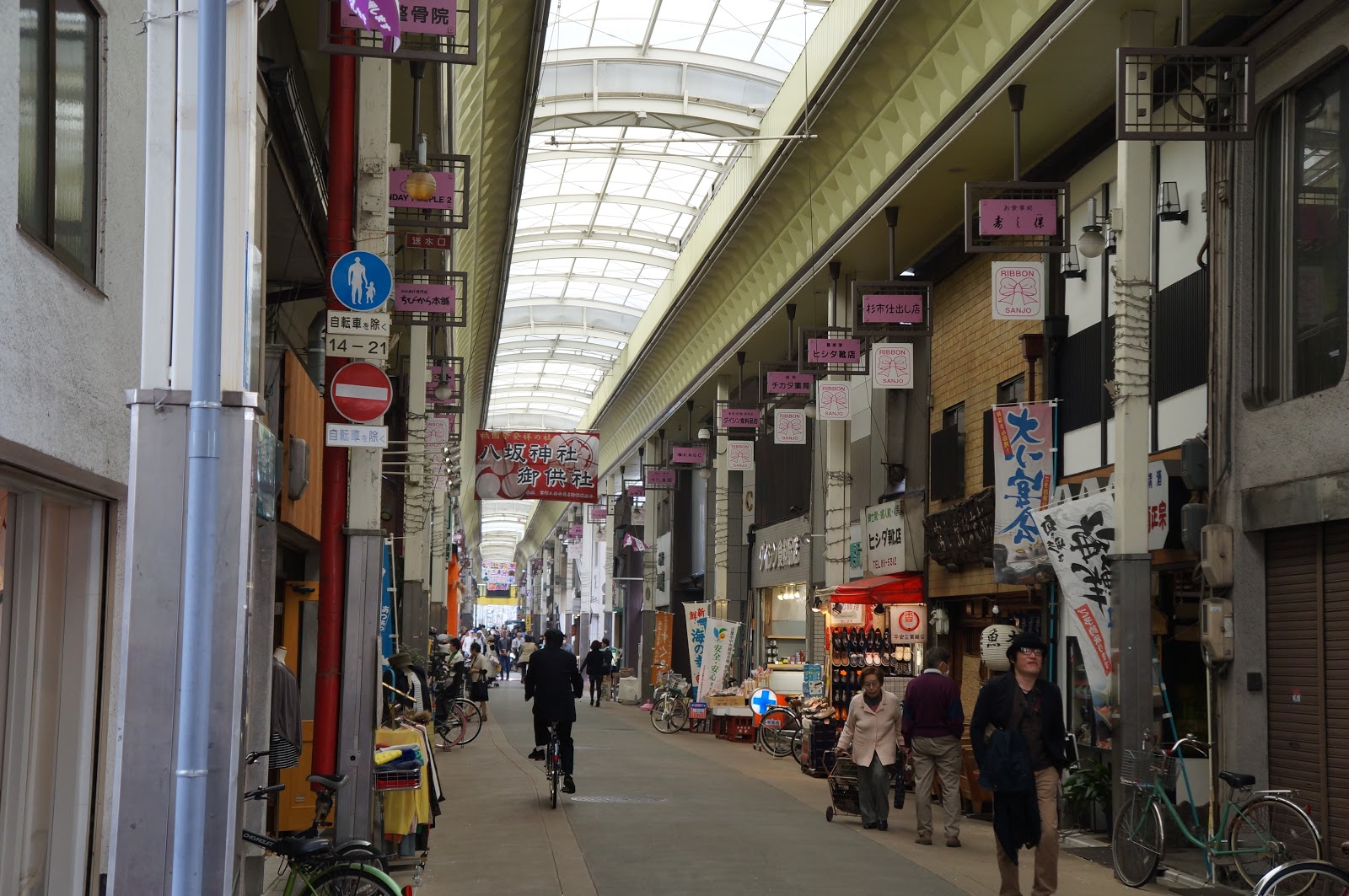 There was a lot of life outside of Nijo Castle. Tour buses and their occupants massed near the entrance. Fortunately, the queue for tickets was short.

This was no longer a classical Japanese castle with a tall central keep, but as a place of residence of the Tokugawa shogun and later an imperial residence. The first building, a large wooden structure called the Ninomaru was a place for the shogun to receive and entertain guests and visiting lords. 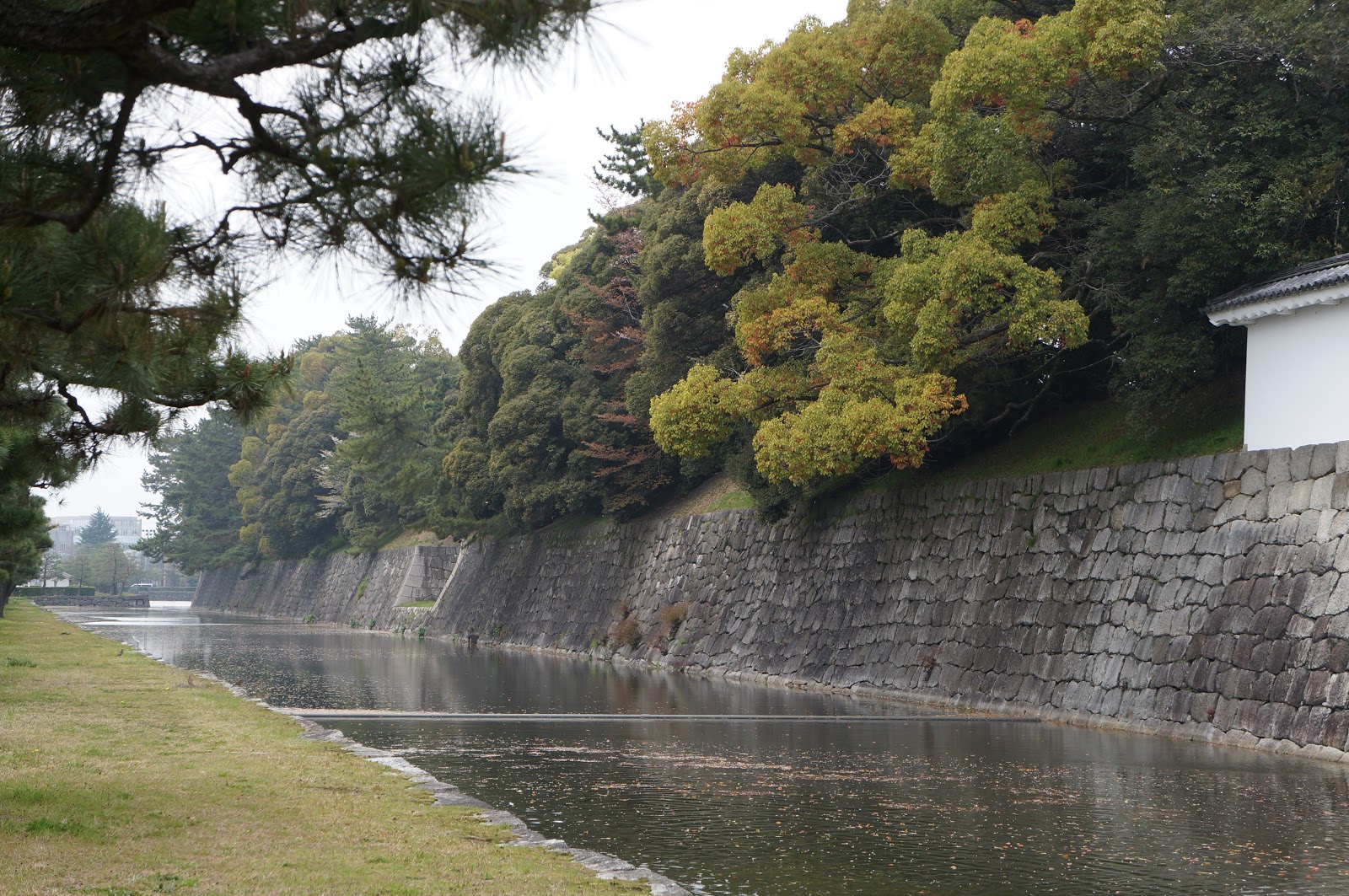 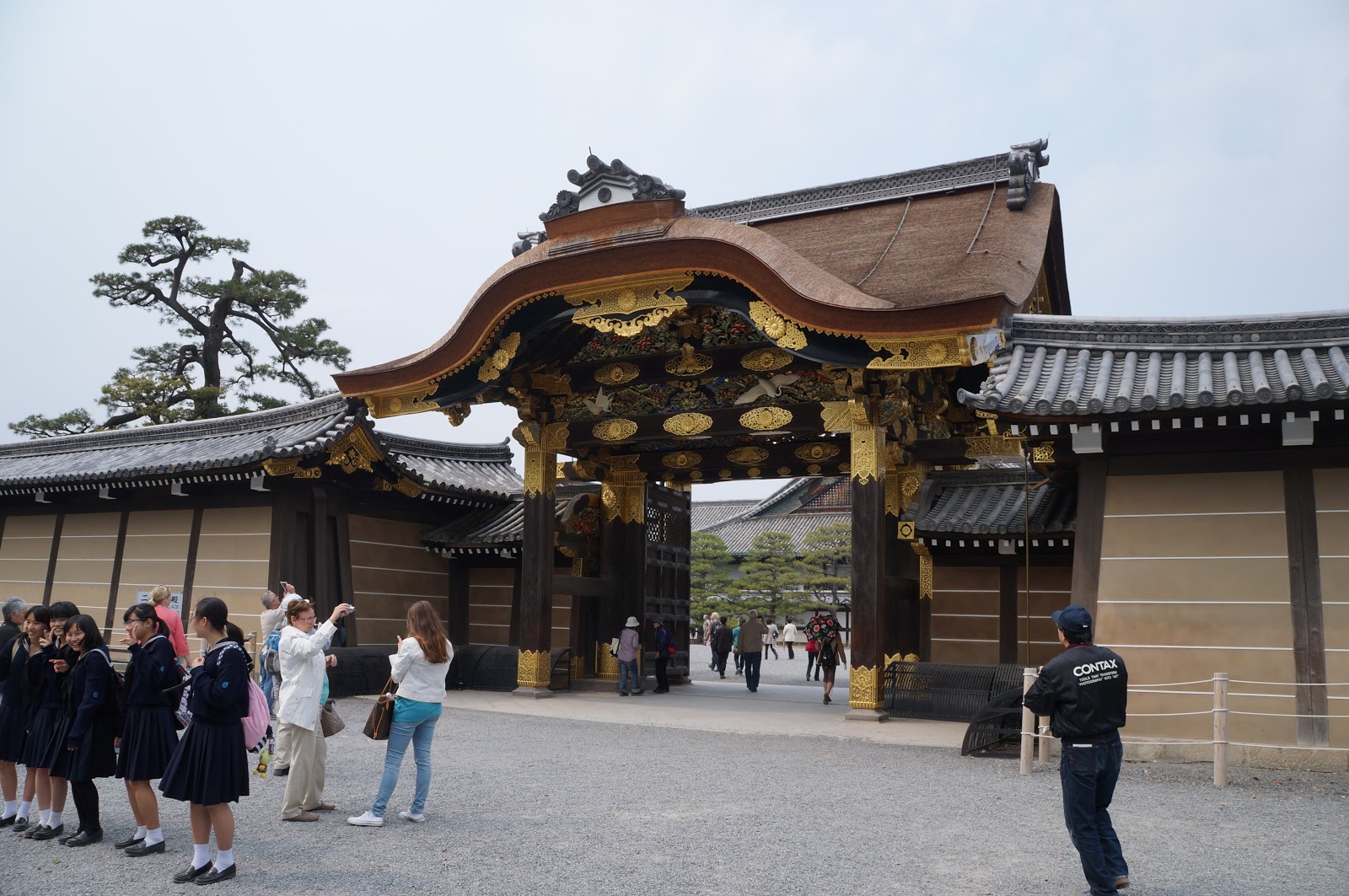 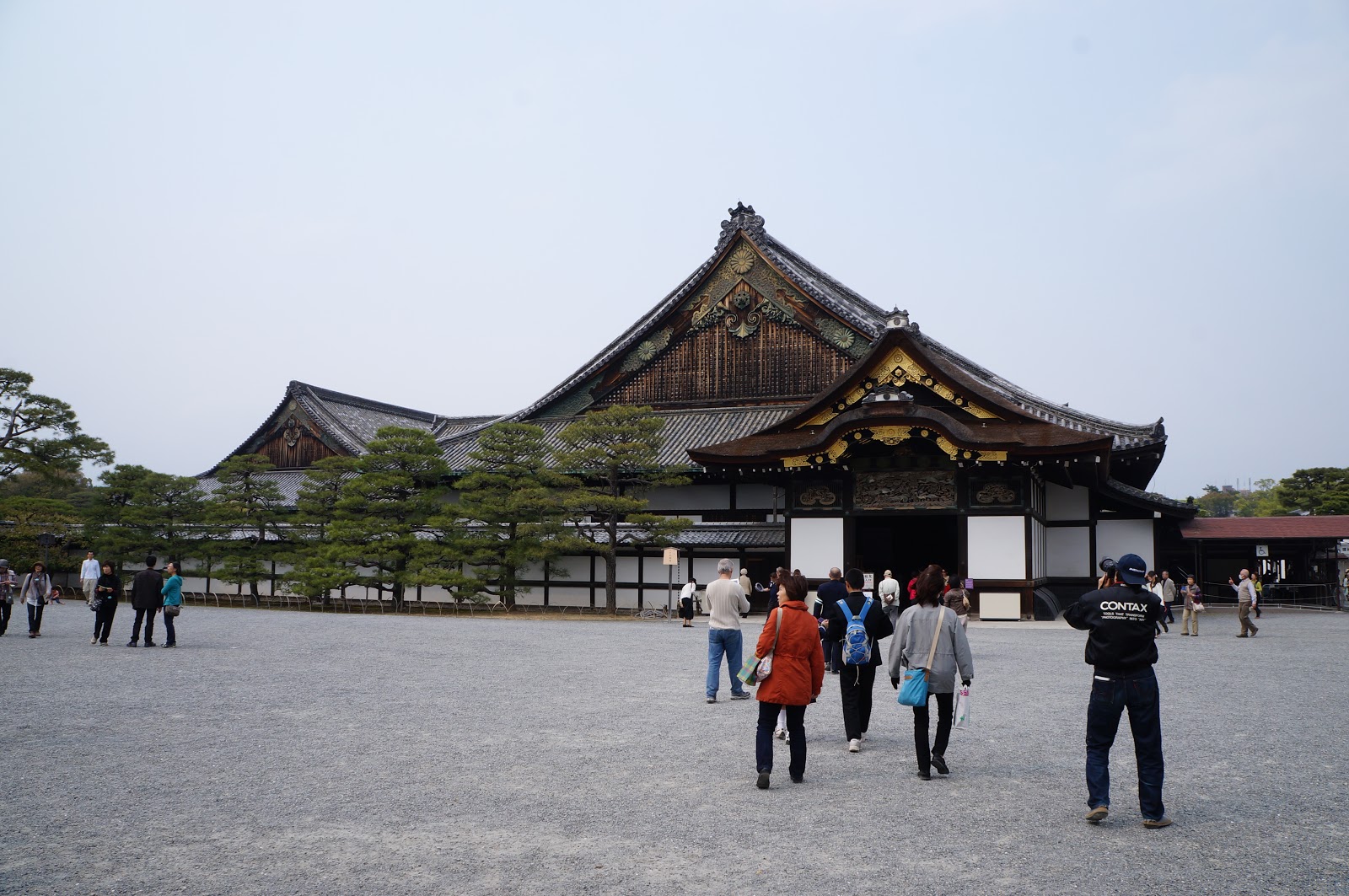 No photographs are allowed inside the Ninomaru as you walked a defined path in your socks. The interior is dark, but impressive and it was easy to imagine important business being conducted here. Each large room is decorated with painted screens (mostly reproductions) on the walls depicting clouds, birds and nature. The ceilings too are painted with designs and many of the trimmings and details are coated with gold leaf.

The rooms could be opened to elements, but the building had been shut to protect the interior from damaging light and the winds that rattled the shutters.

Once outside again we took a stroll around the castle grounds and through a gate into the Honmaru, an inner defensive area that was protected by a stone wall and once hosted a five story keep. From atop one tower position on the wall great views of the surrounds could be obtained. 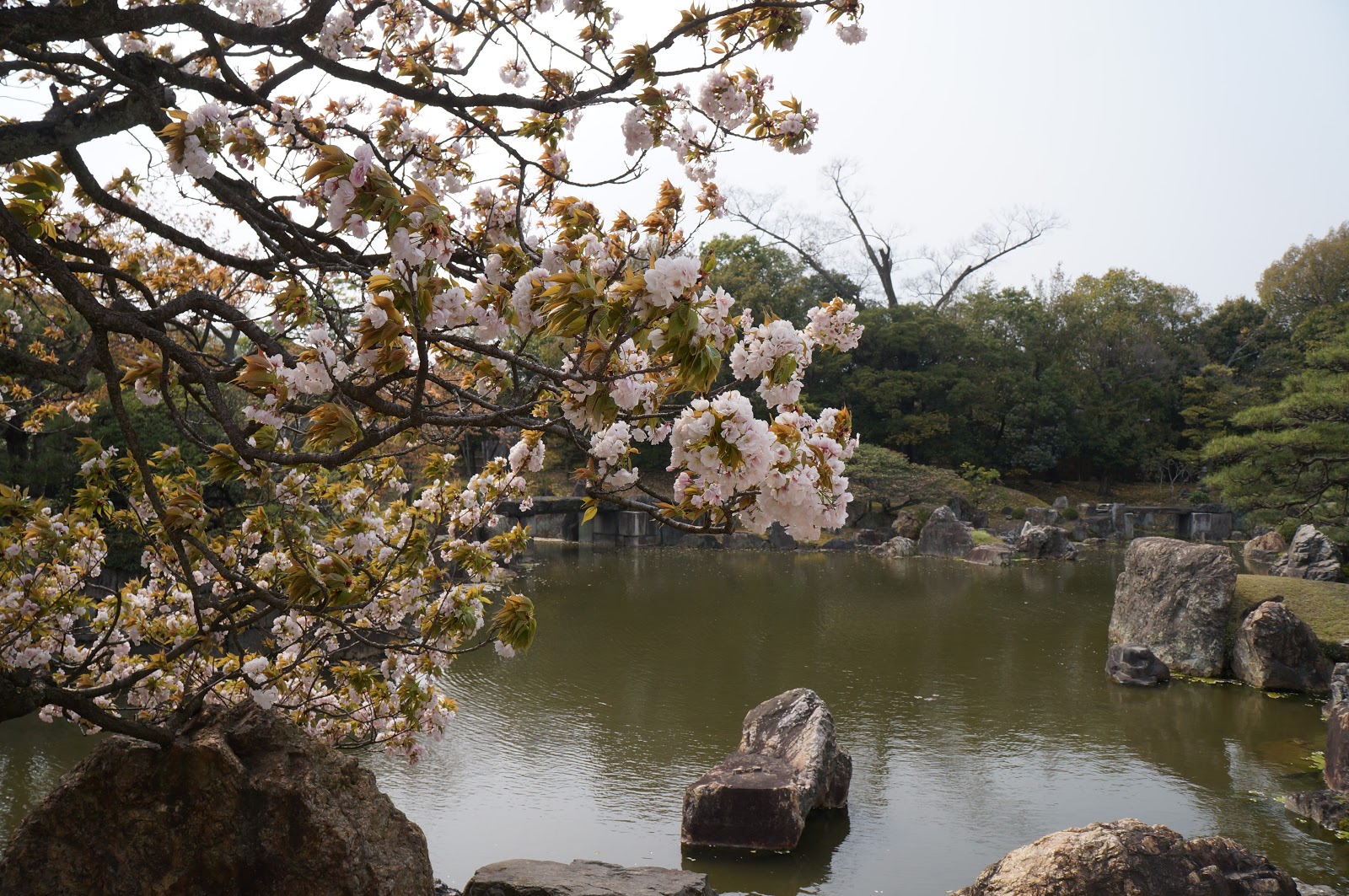 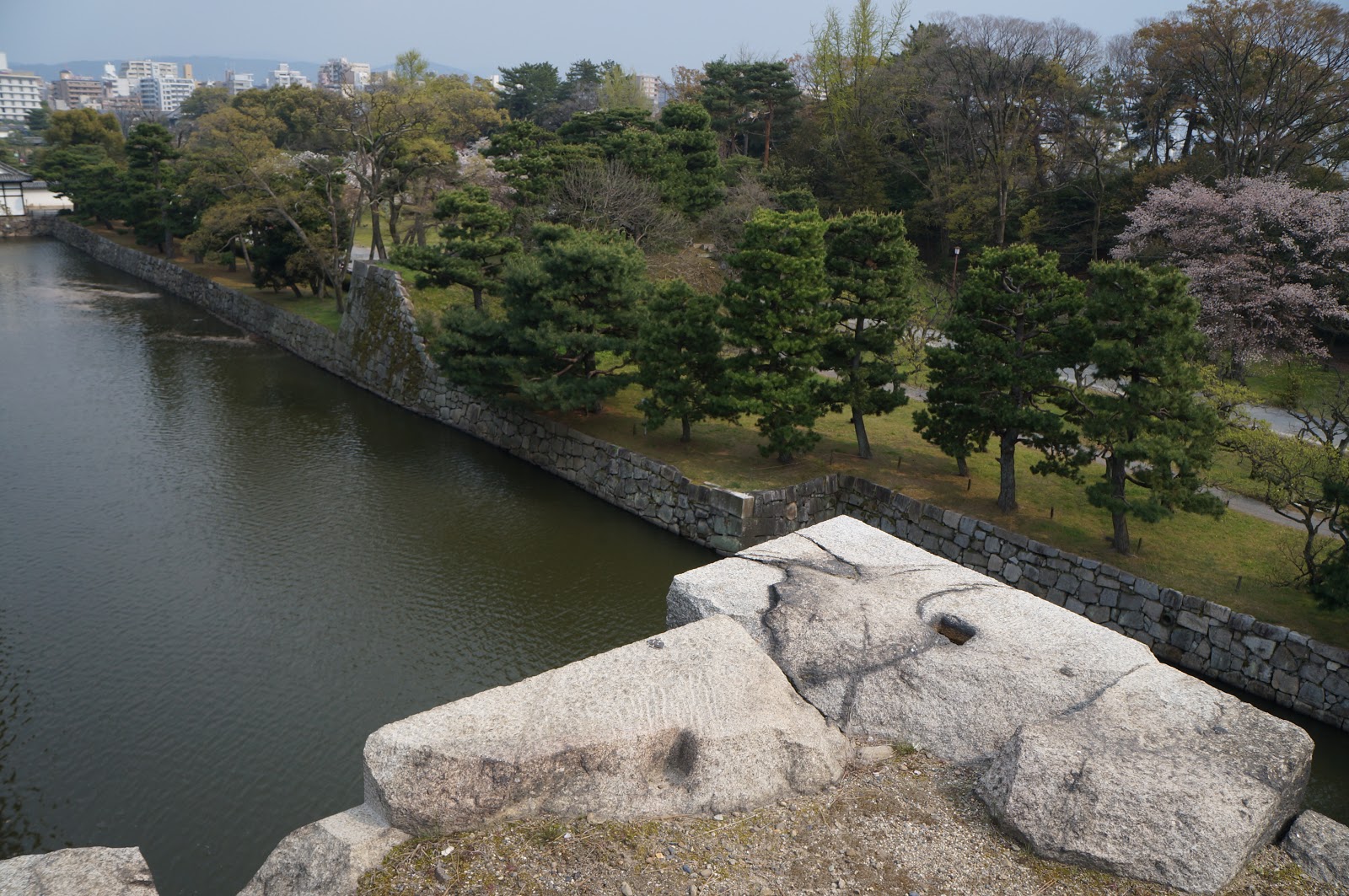 As we continued on we walked past cherry blossoms and perfect camellias. Mum stopped to buy postcards of the screens from the souvenir tent. Then with weary legs we emerged through the outer castle walls and back on the streets of Kyoto. 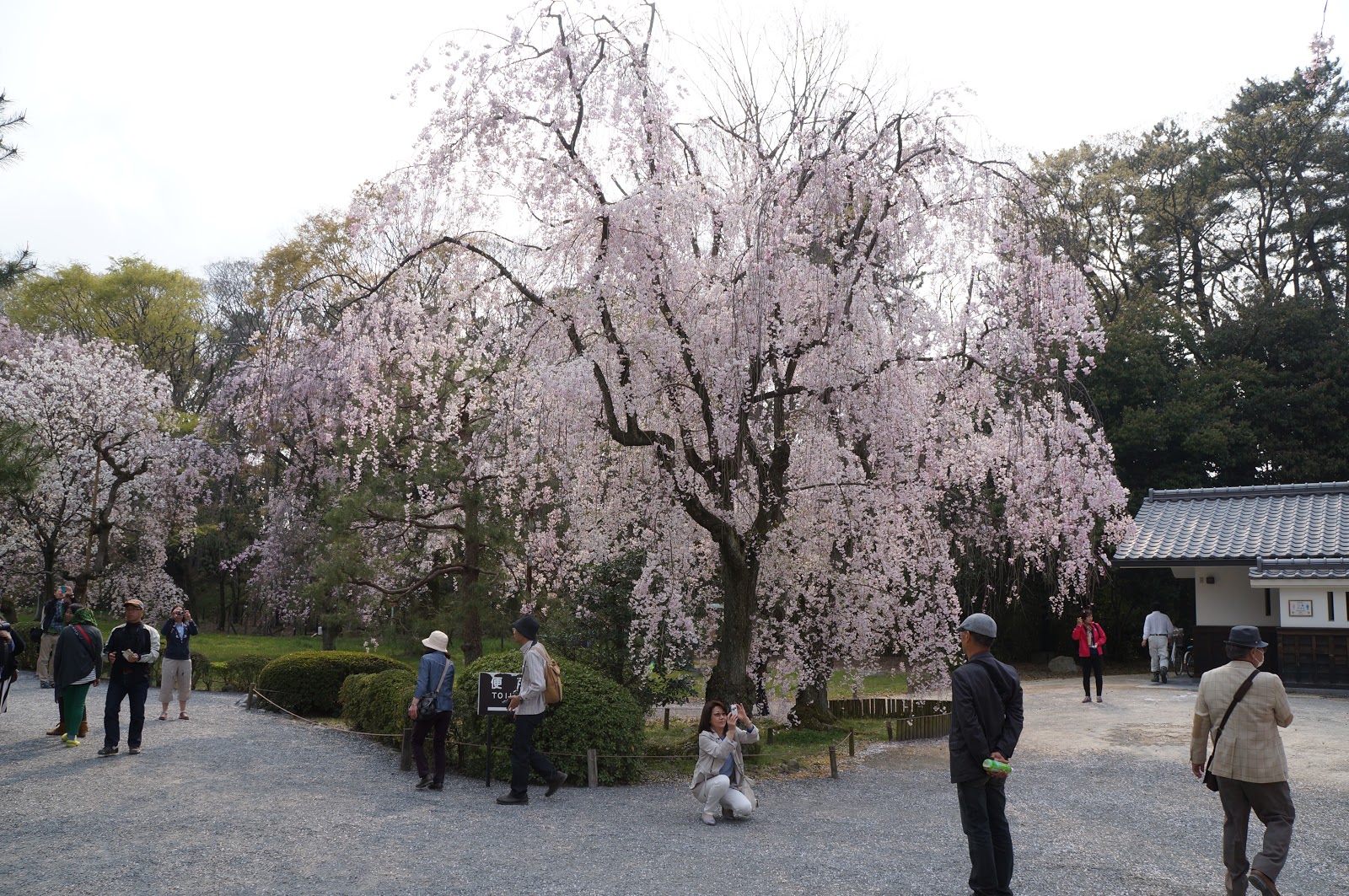 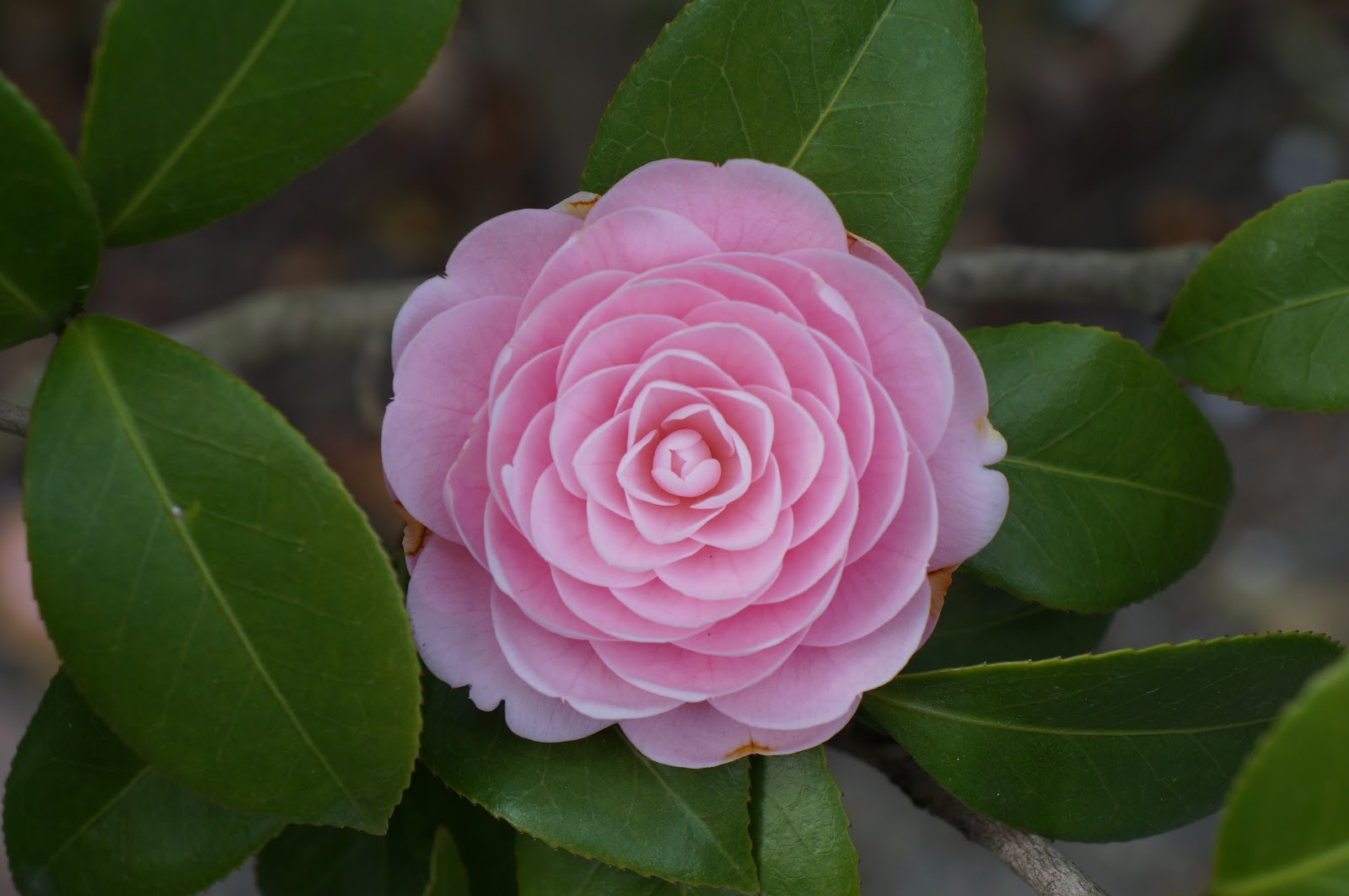 I originally had other plans for Mum in Kyoto, but there was no time for that now. Instead we caught the subway into downtown Kyoto. I took Mum for a walk down along the Pontocho, a narrow street lined with expensive and otherwise restaurants and known as a place to see apprentice geishas, or maiko. 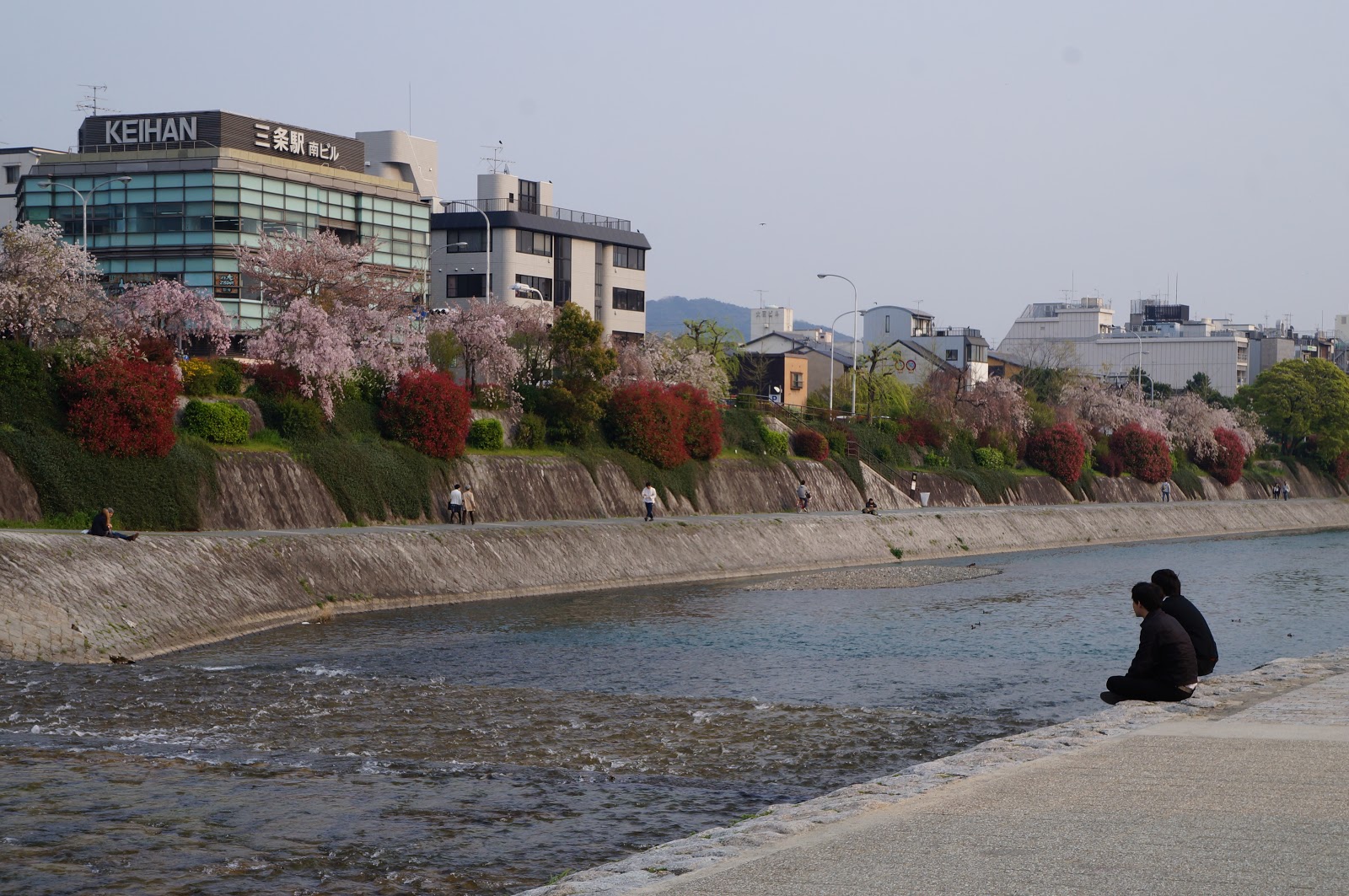 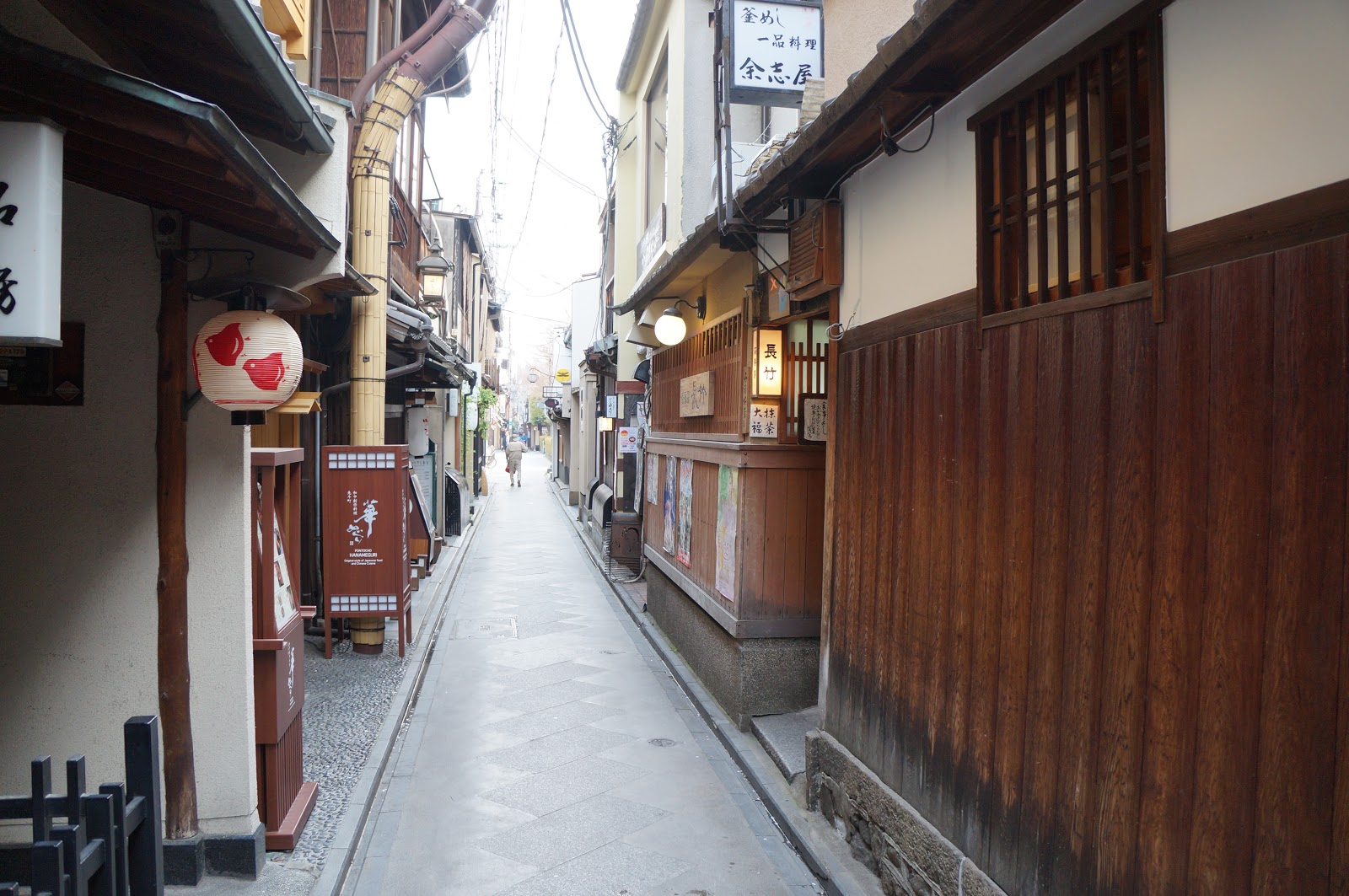 We didn't spot any, it was too early anyway. I had a place in mind for dinner, our favourite shabu-shabu restaurant, Fufutei, which is in the parallel Kiyamachi street, which runs alongside a pretty cherry tree lined canal. We entered at its 5 pm opening for an all-you-can-eat meal of thinly sliced pork, beef and vegetables cooked at the table in a broth and eaten after dipping in ponzu or sesame sauce. 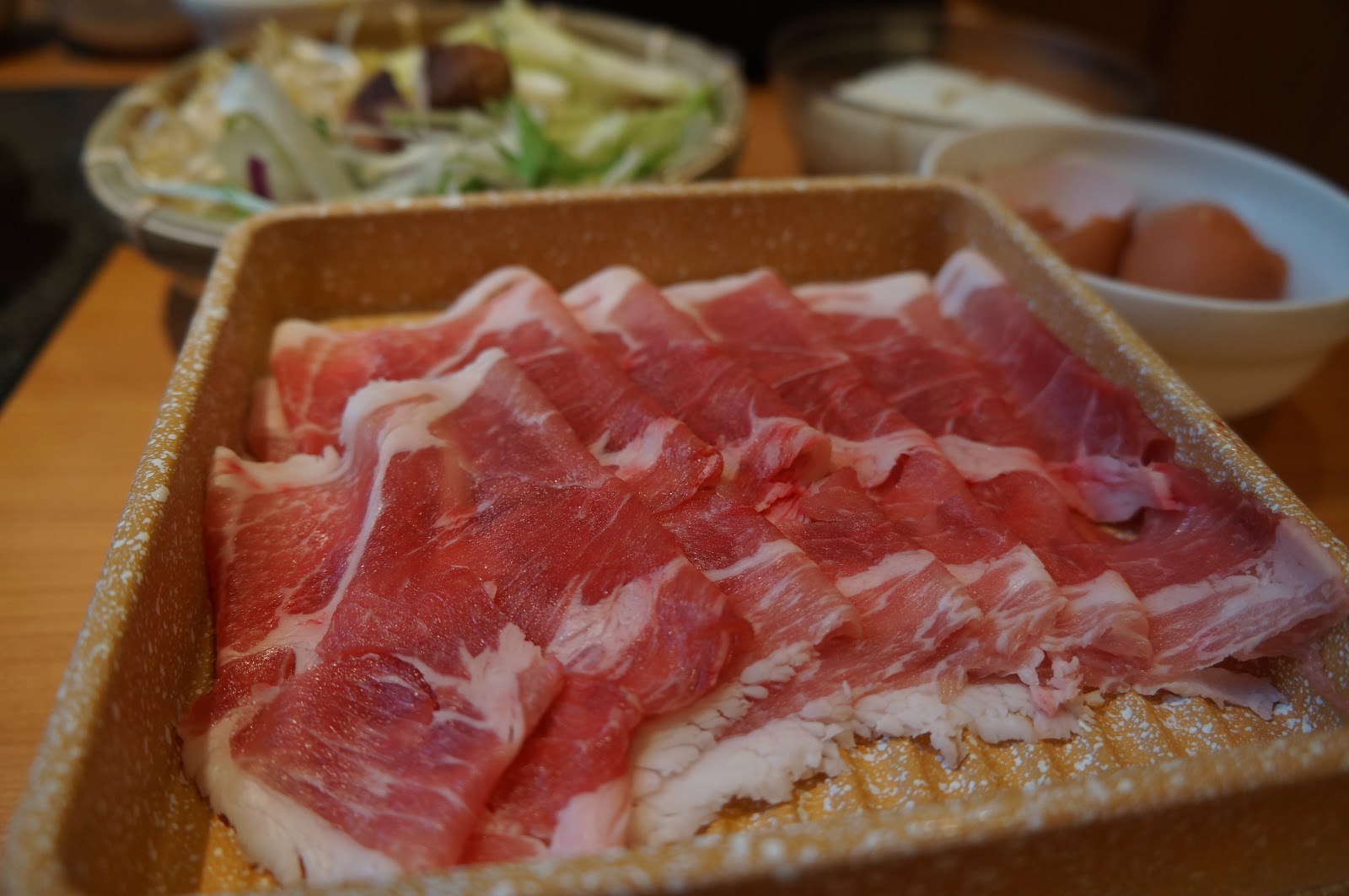 It was not yet dark when we emerged, very full, so we visited a couple of fabric and decorated cloth shops along Kawaramachi dori on our way to the subway station. From there we caught a subway back to Kyoto station, then a comfortable Wide View Hida back to Osaka. 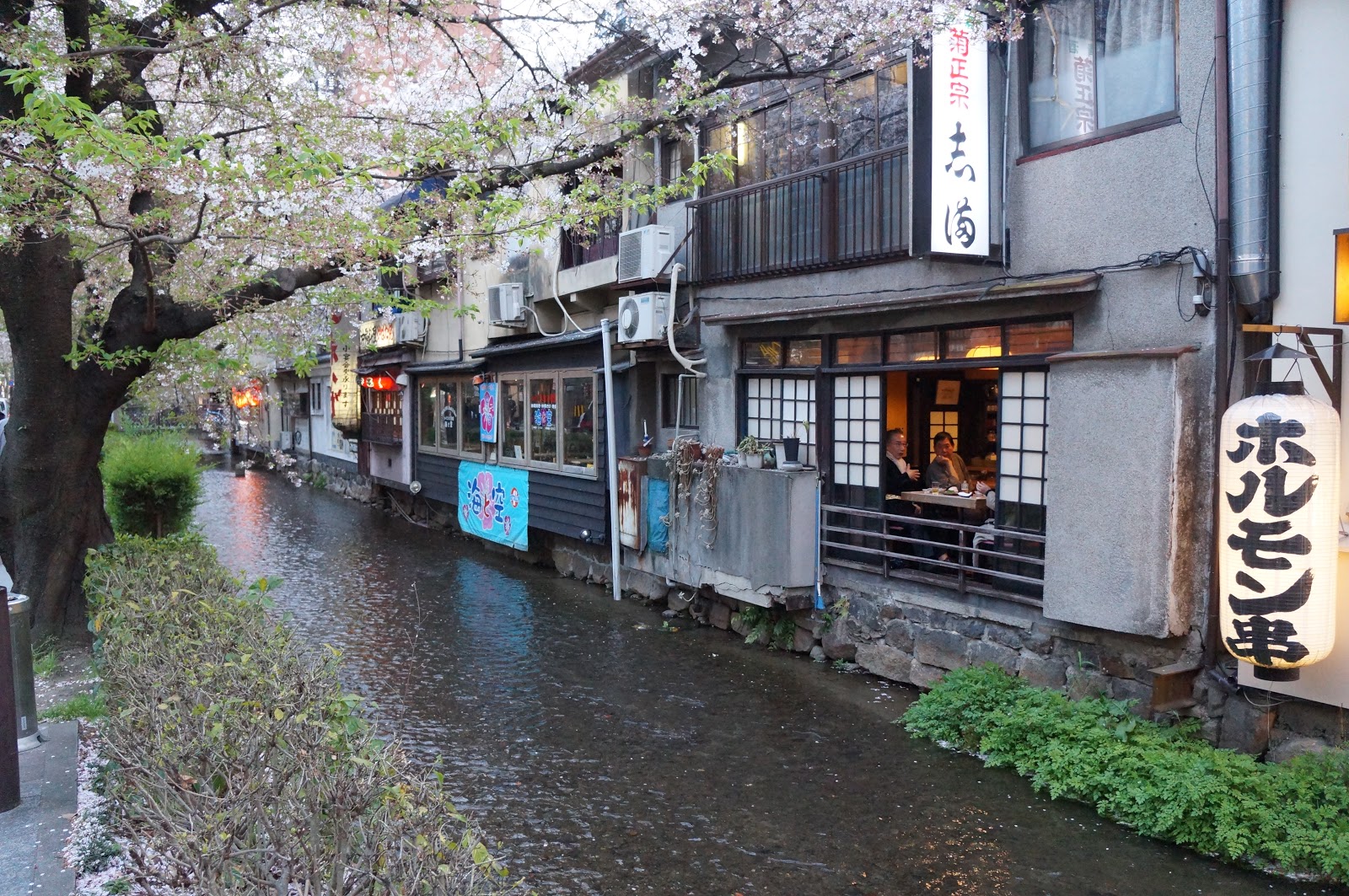 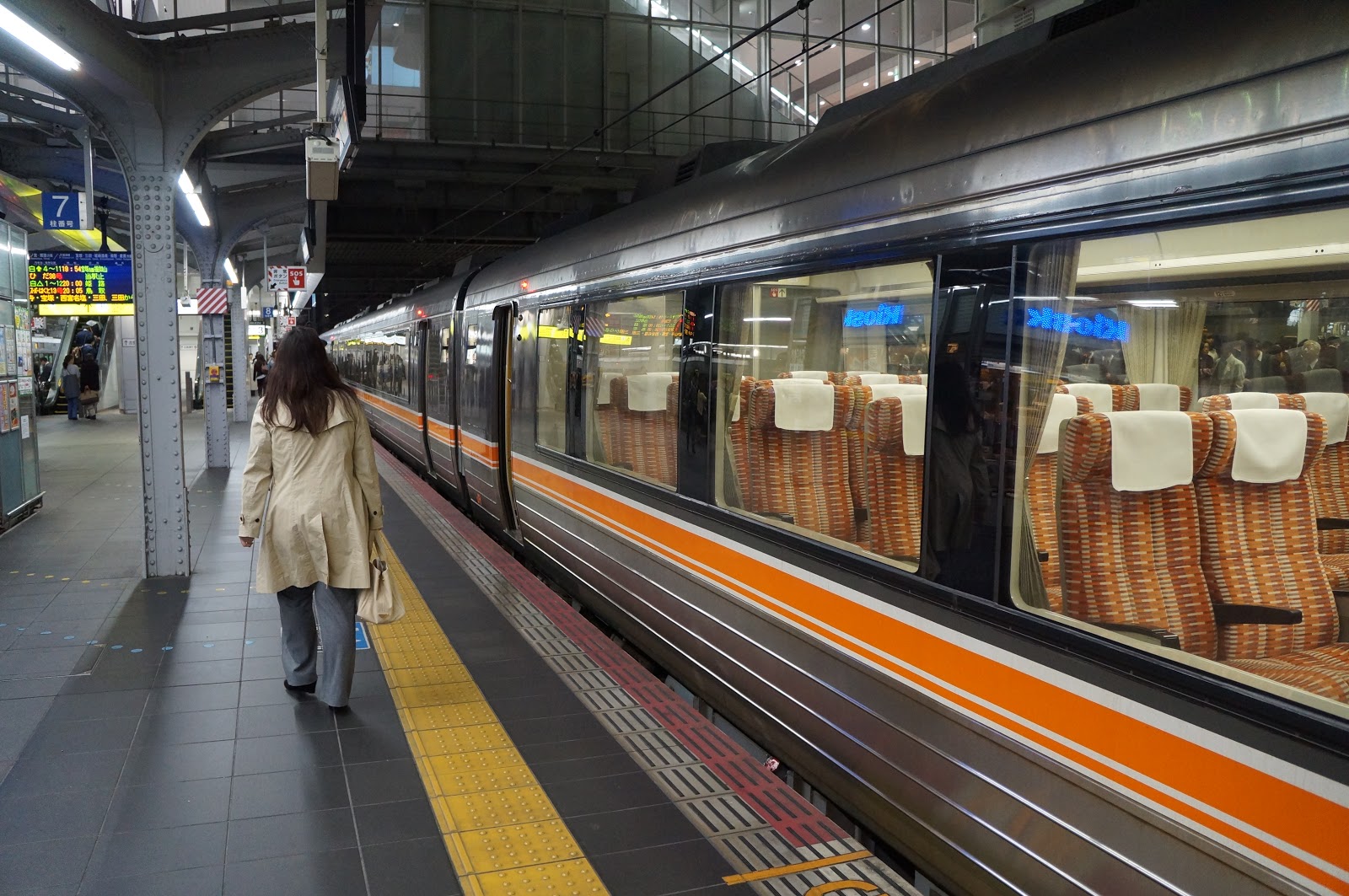 But our journey wasn't yet over, for I wanted to give Mum the quintessential Japanese neon experience that is so unlike anywhere else in this world. So we continued on in the Midosuji subway to Namba and walked to busy Dotombori street. 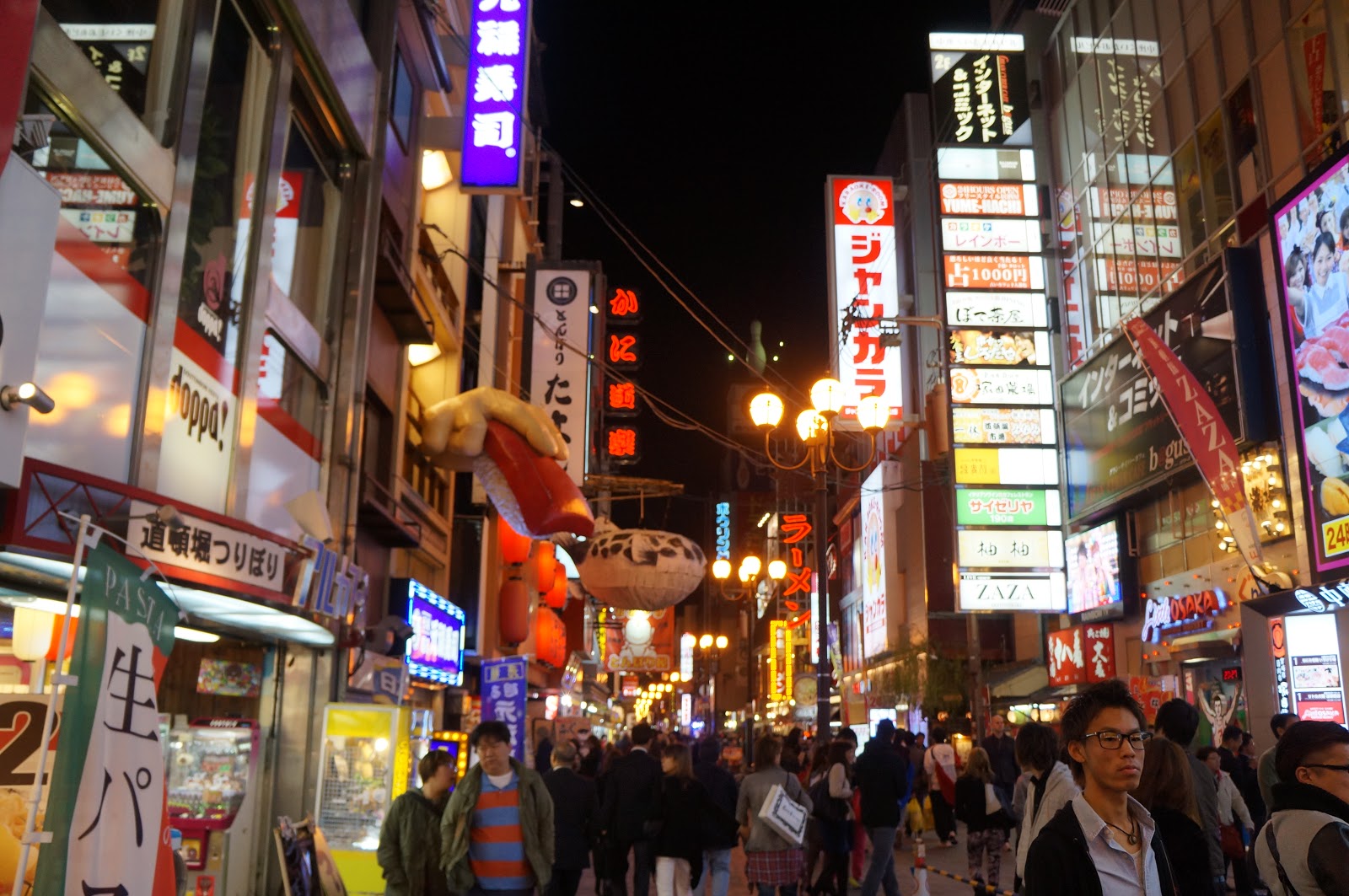 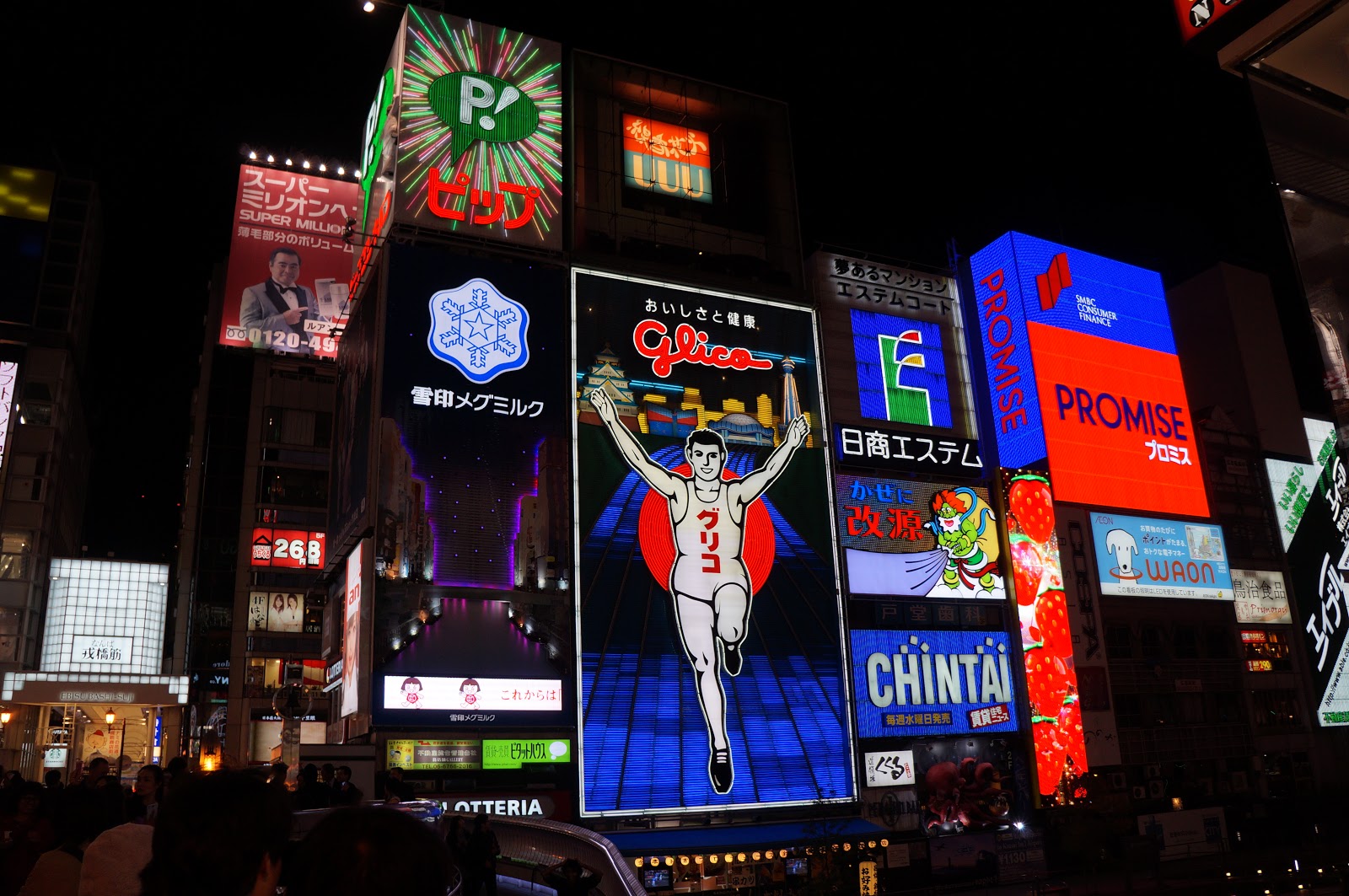 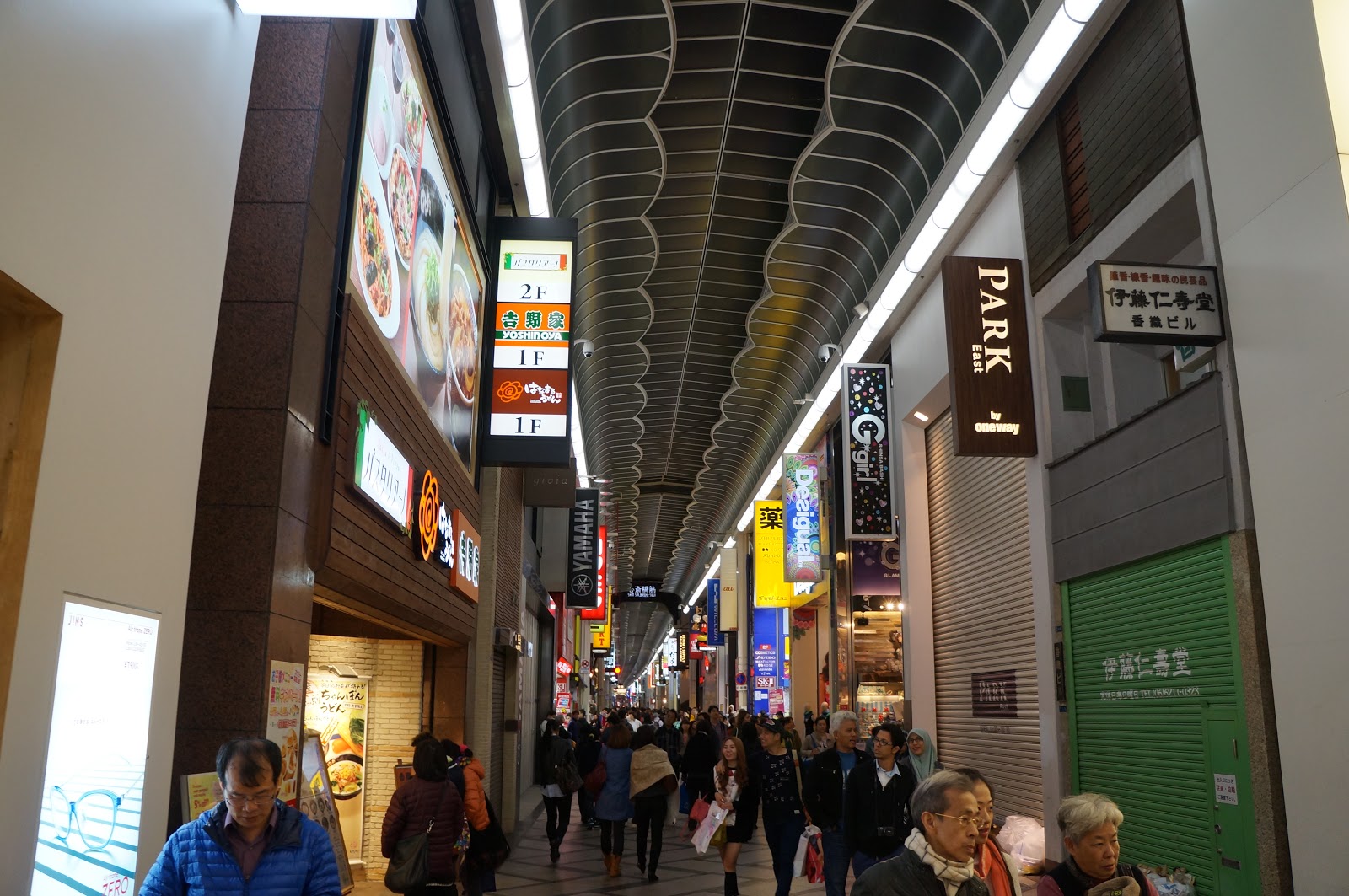 Both too full to partake of any other food, we just admired the many food related objects demonstrating the cuisine served inside the building. Then across the river for a view of the Glico neon sign and a walk in a more lively covered arcade, the Shinsaibashi Suji. I bought bags of Japanese Shiseido shampoo and conditioner refills from a couple of Matsumoto Kiyoshis, but most shops were closing for the night, so we headed back on the Midosuji line to our hotel.