Santa and the Arctic Circle 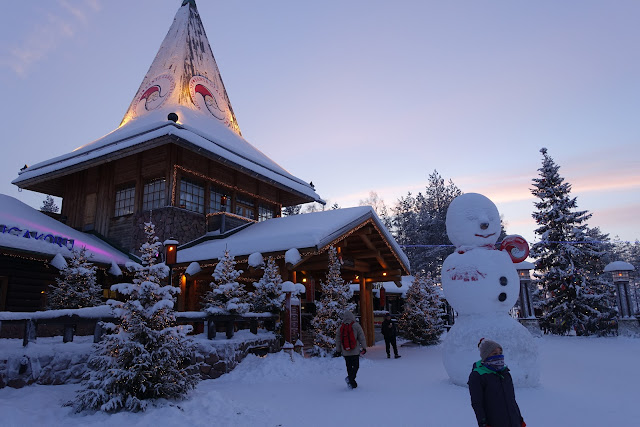 Ho ho ho! Crossing the Arctic Circle we will go. On husky sled and reindeer sleigh, taking us a little way. To Lapland for our Lapphund. Past of line of no sun. Finding Joulupukki in the snow, or Santa to those who know! 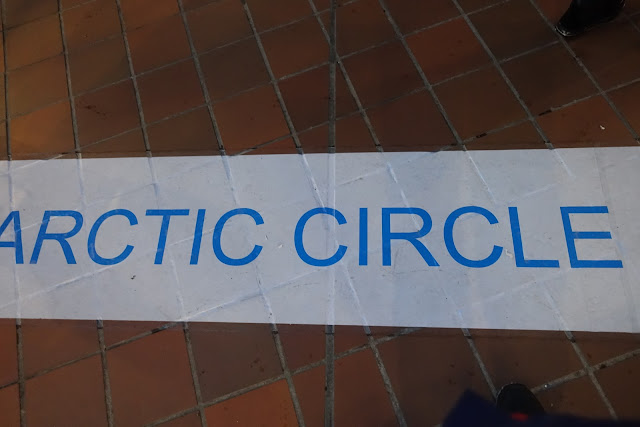 Rovaniemi sits on the Arctic Circle, or the line of latitude demarcating where the sun will not rise and not set on at least one day each of the year. It is also the capital of Lapland and reputedly the home of Joulupukki, a Finnish version of Father Christmas.

There are many references to Santa Claus around Rovaniemi. We are headed to Santa Claus Village, a tourist park that houses a number of activities as well as the official Santa Claus post office.

Breakfast at the hotel includes some Lapland delicacies, included smoked reindeer mayonnaise, cloudberry sauce, baked cheese and flatbread. I really like them.

Unfortunately we are running a bit early, as the bus there doesn't come until 10 AM. It is bitterly cold outside, -16°C. We try to have a snowball fight, but the snow is too powdery and refuses to stick together.

Driving out to the village we are struck by the amount of snow everywhere, the frozen river and the pale light.

At the village I purchase us tickets for the husky and reindeer rides.

We are seated in a narrow wooden sled, Alex in front, B in the middle and me at the rear, with the driver standing behind us. Nine dogs are attached at the front. Some words from the musher and we are off, between the spruces and out into the open snow. As we race along the two kilometre track the wind and snow bite at my cheeks and ears. 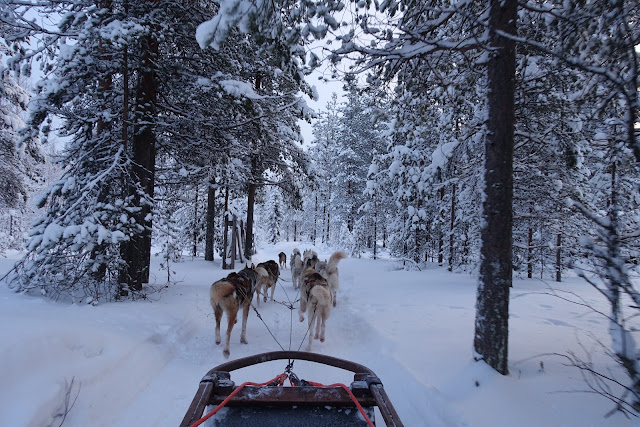 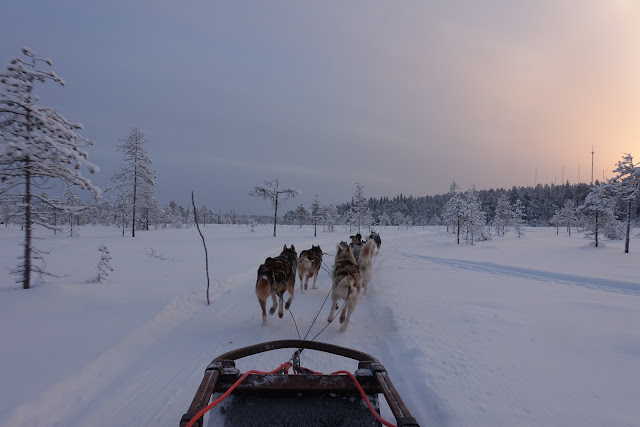 It's freezing, painful but oh so fun and the scenery is beautiful in the winter morning light. It's like nothing you will ever see in Australia.

Afterwards we wander around the kennels, greeting the dogs before returning to the log fire near the entrance.

Further down is the Moomin Snowcastle. Now, none of us are really familiar with Tove Jansson's troll characters, but they are big in Japan. 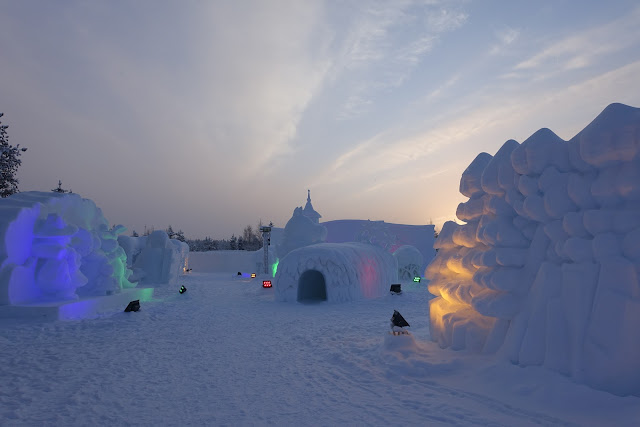 We wander around half, but Alex is complaining about the cold and wants to find a toilet with hot water. We then notice the Moomin Cafe, which is heated relief. It's amazing how good hot chocolate tastes when you are freezing.

Feeling much better now we explore the other half of the grounds. Alex is thrilled to discover an inner tube slide has been constructed and is up and racing down many times until we can drag him off with our hands freezing now.

There's another toboggan slide further along which he has a couple of rides on and an ice hockey court that goes unused, a snow maze and igloos to explore. I felt much better about the steep entry price after that.

Santa's Reindeer is back towards the main part of the village. We are divided between two wooden sleighs, Alex and the driver in the first, B and I side by side in the second, one reindeer each, with ropes connecting the train together. 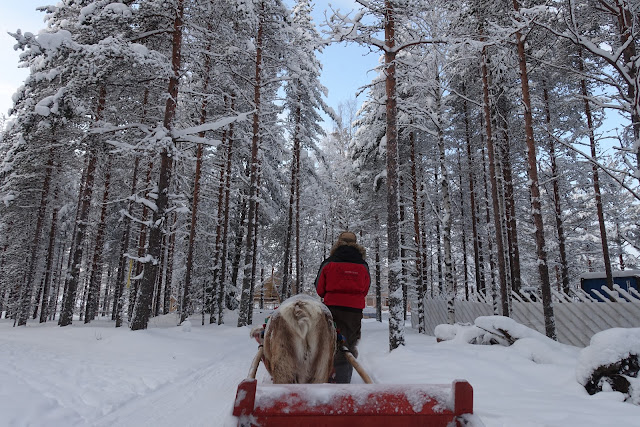 The one kilometre reindeer ride is a lot more sedate affair than the huskies, with none of the aerial acrobatics featured on your typical Christmas movie.

It was time to meet Santa at his office. This really is very touristy without much sense of a busy elf workshop. The Santa is very sweet though and we finally get our Christmas photo, if a bit late or very early.

We argue with Alex over the purchase of a husky soft toy. He wants the big one, we want the smaller one.

Now he wants to go on a plastic sled. It's the same to hire or buy (10 Euros) and in the end he barely has anywhere to use it. Waste of money.

Confused over bus times we just miss the Santa Express and discover our return ticket is invalid on the other services.

Guess we are eating dinner here at the village.

We see Santa's Salmon Place, a mock teepee with a real wood fire over which they grill big chunks of salmon. It takes a while to cook, but it is really, really good. We wash it down with warm berry juice, heated in kettles by the fire. 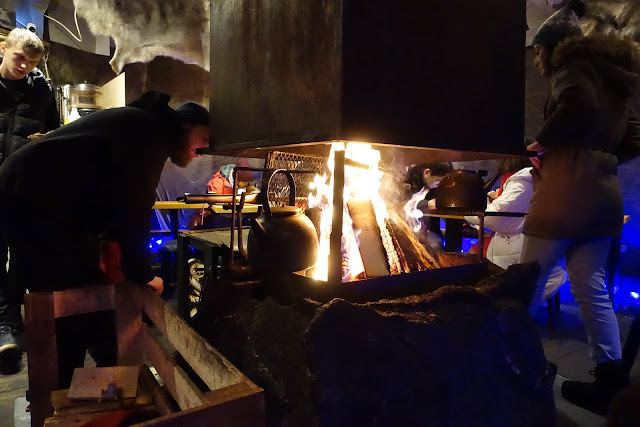 Okay, now we really have to catch that bus. I'd rebooked our train ride back to Helsinki to the early train.

Though we have to stand for the ride, we make it back to the hotel, collect our luggage and catch a taxi to the station.

We've got an hour before departure. The station has no ticket office, but it does have a restaurant with a pretty decent choice, not that we need to eat.

Alex and I go out to photograph the train. It's freezing outside and our carriage is right at the front, a double decker sleeper. The thermometer display at the station says - 19°C, the coldest we've experienced. 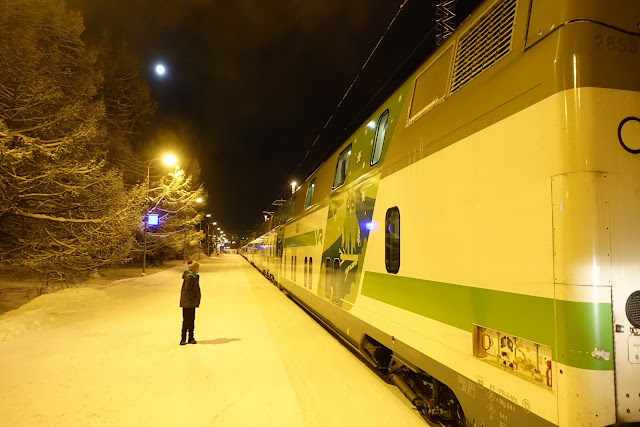 Eventually we all return with our bags and climb up the stairs to our cabin. It's surprisingly nice, so much better than my XPT sleeper (and the Cabinn). Lots of power plugs, a reasonable sized bathroom and toilet where the shower cabinet swings out to make space. The water bursts are brief, but hot. Just a pity that the wifi doesn't seem to work. 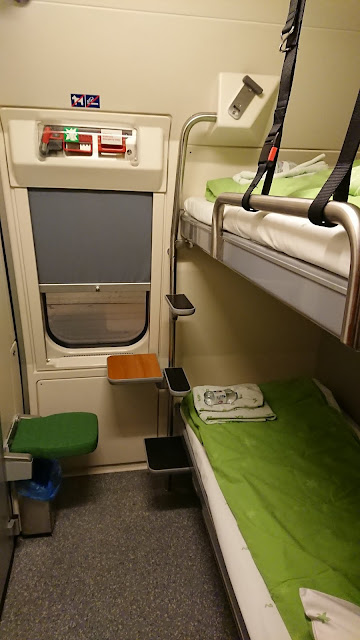 Our departure is delayed by an hour as we wait for the inbound train, the one we arrived on yesterday, and its engine to drive us back. So off we go, having done our Lapp, it's back to HEL!