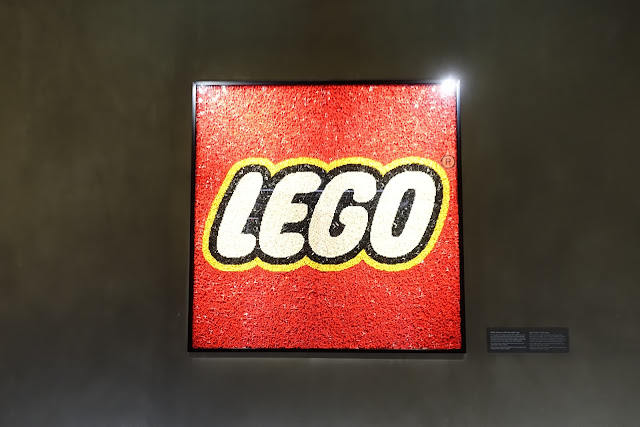 When a whole city of Lego begins devouring your home and you are visiting Denmark it only makes sense to visit the Lego House.

The world's most popular toy originated in Denmark and the headquarters and main factory still resides here. Unfortunately, Legoland is closed for winter, but Lego House remains open.

This new attraction is an architectural marvel showcasing the history of Lego and offering building experiences.

We rush out of the hotel before breakfast to catch the fast train to Vejle, the closest station to Billund, where Lego is based. There must be two trains departing close together as we board a slower one. Right direction, slightly wrong timing.

Fortunately with our Eurail passes it doesn't matter ticket wise and we even get to ride in first class, where we are served bread rolls with jam and have access to free sparkling water, tea and coffee. There is also free wifi and inconveniently located overhead power points that require long cables to be of any use. 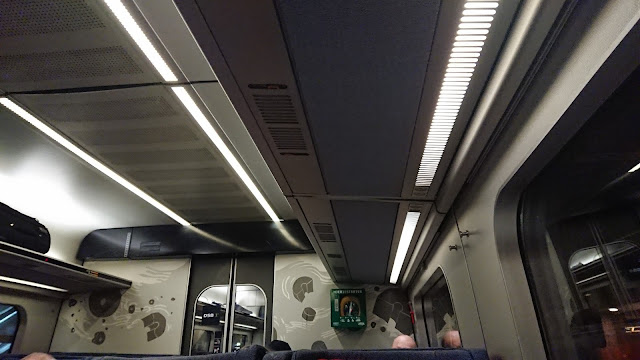 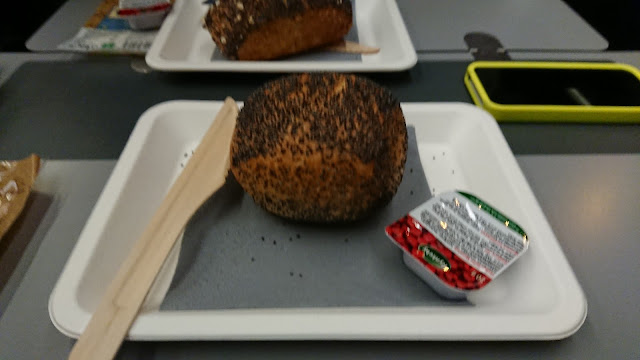 There is little to see for most of the early part of the journey, with darkness outside. Eventually it greys up and there are old towns and ploughed fields visible. We cross the bridge where six people died recently when their train was hit by debris from a beer train in high winds. 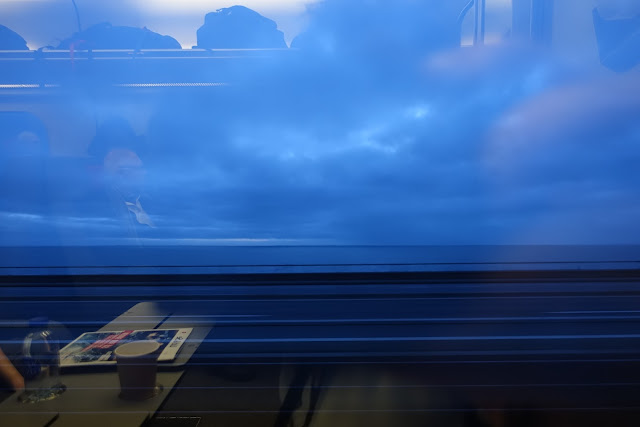 The approach to Vejle is pretty, houses by an inlet. There's not much time to change to bus 43, waiting in the adjacent stands.

The ride is an opportunity to get up close with the countryside. We pass Billund Airport, originally developed to serve Lego's global needs. Legoland stands forlornly closed for winter, the streets around near empty.

Lego House lies in a semi-industrial area, standing in modern contrast to the area surrounding it. Inside is happiness and smiling staff. 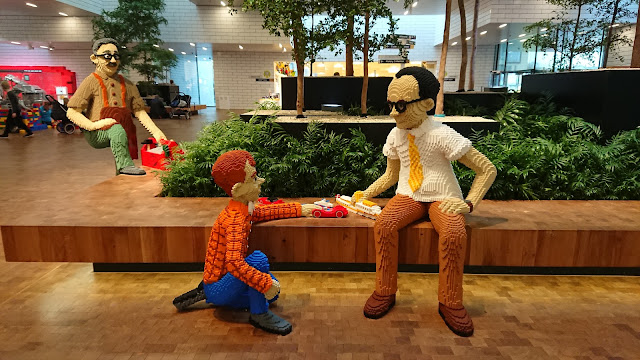 An automated injection moulding and packaging machine spits out our gift of a bag of six red bricks, while a kiosk prints our unique combination instructions. It's been calculated that there are over 29 million different possible construction combinations for just 6 2 by 4 bricks.

The basement of the house stores a fascinating historical display of the Lego company's products, from their humble wooden toy beginnings until today. We first watch a compilation of old Lego commercials. Other movies show at different times.

The old Lego sets bring back such memories. My parents bought us an old Lego set, along with a train kit and other smaller sets, from before I can remember. Later I purchased or received as a gift a range of space Lego sets. Those I do recall getting, but I loved to look through the old Lego catalogues my parents kept and sometimes I'm uncertain if I ever received some sets or just saw them in the catalogue. 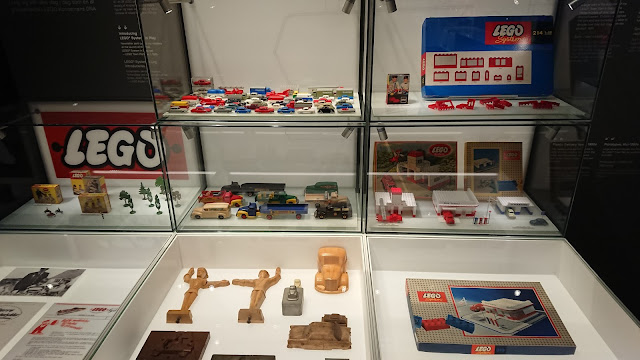 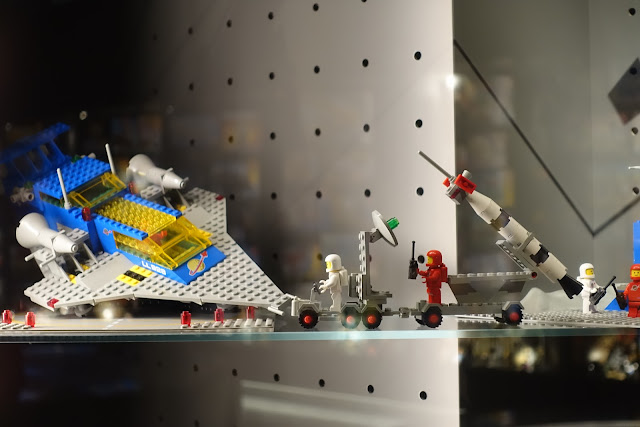 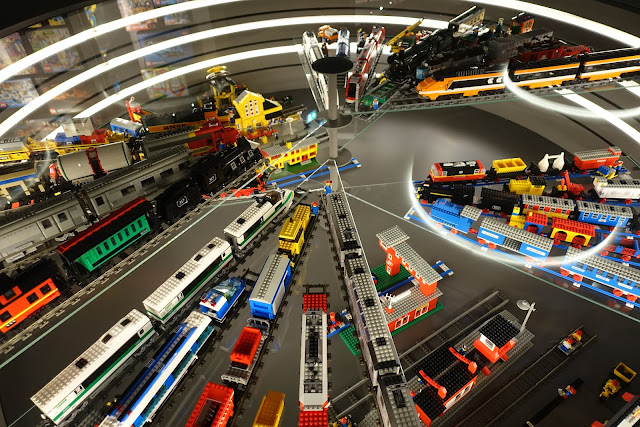 In the centre of the house is a giant Lego tree, the construction of which is astounding. The top floors hold displays constructed by Lego enthusiasts along with various hands-on experiences, most of which involve building your own Lego. 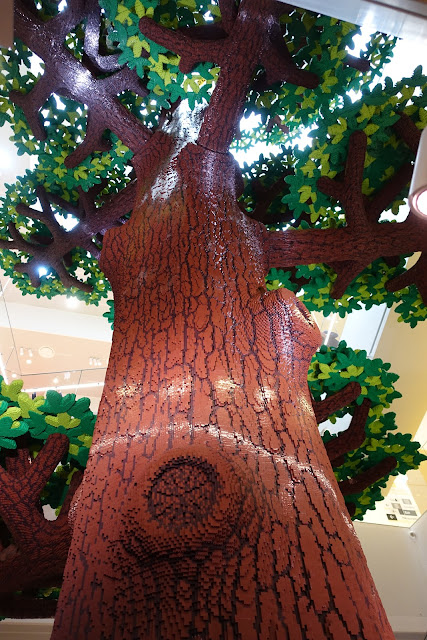 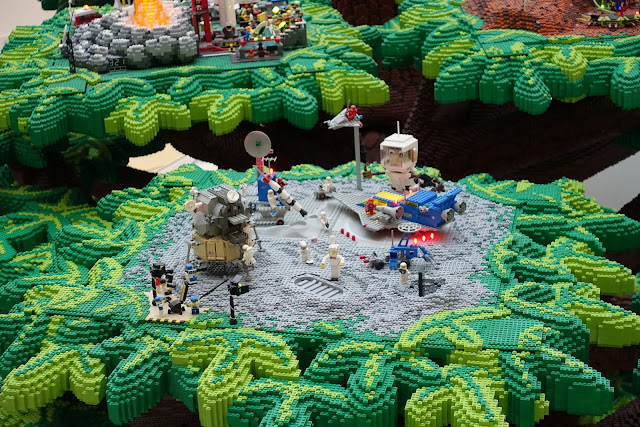 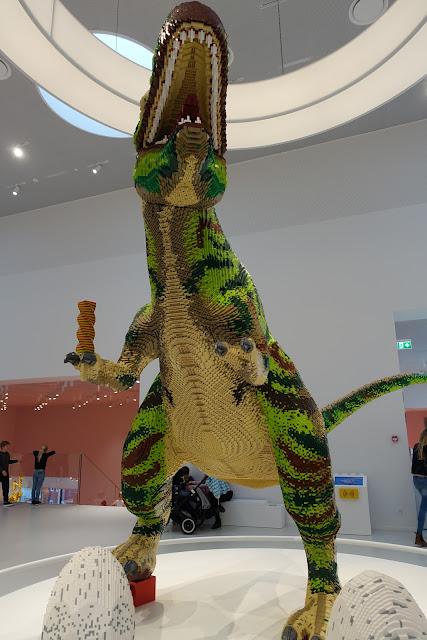 There is a stop motion video set up, race your car, play with Lego critters and more. Alex (and us too) want to try them all. 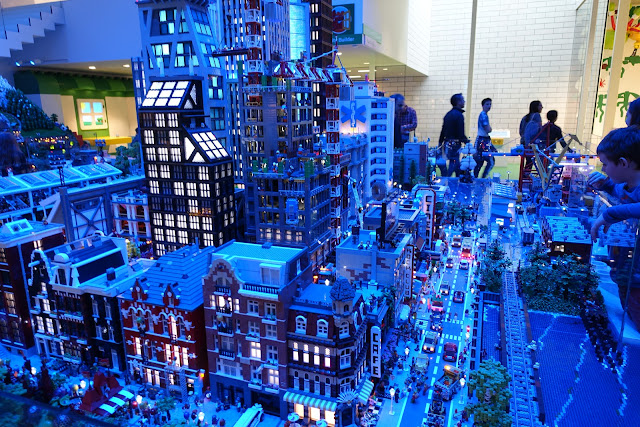 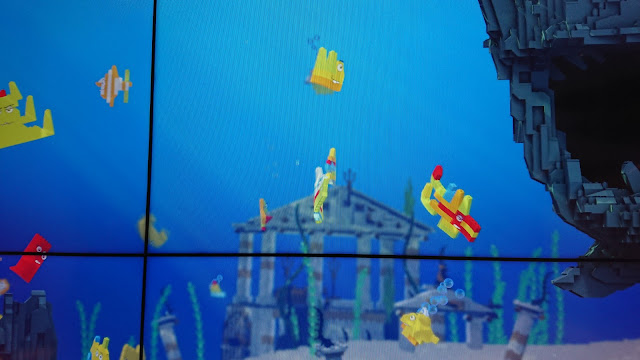 We eat a simple lunch of sausage buns and panini at the Brickacino Cafe, the restaurant having an hour's wait. Then it's back to building.

Before we can leave we have to stop at the shop to get an exclusive Lego House tree set and to build three minifigues representing the three of us.

It's late and raining by the time we get out. The 43 bus takes us back to Vejle station, connecting to the return train to Copenhagen.

Again darkness returns quickly. We are all totally exhausted. Though it is still early in our trip our energy is about gone. Mine especially, drained by infection and medication. Trying to sleep in the uncomfortable Cabinn hasn't helped. I only had a couple of hours last night. 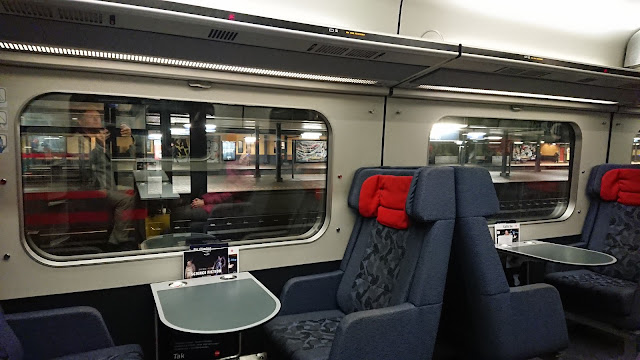 When we reach Copenhagen we have a dinner of pasta at the station, then collect our already packed bags from our Cabinn room, and roll them back to Copenhagen station. It's not long before the train arrives and we are heading off to another country.

After all the warnings of strict Swedish immigration officials our passports are not checked.

Malmö looks fantastic as soon as we step out of the station. The hotel Duxiana is close by and we are delighted to enter a bright clear.room with a big bag complete with puffy doonas. If only the shower didn't flood it would be perfect. 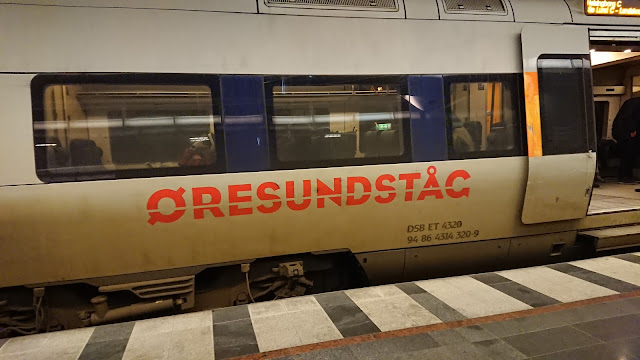 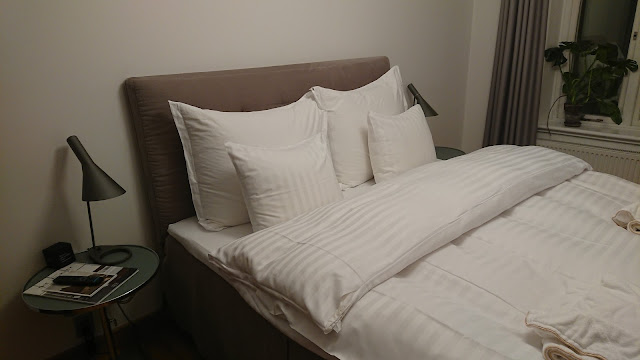 The others just want to rest. So do I desperately, but the lights I'd spotted on the way in are just too enticing to ignore, especially if we are only to spend a night here.

The grand Stortorget square has a Christmas tree. Further down in Gustav Adolphs Torg there are flames burning atop posts and huge trees decorated with Christmas present lights, ball lights and heart lights, while historic Lilla Torg has a giant lampshade. 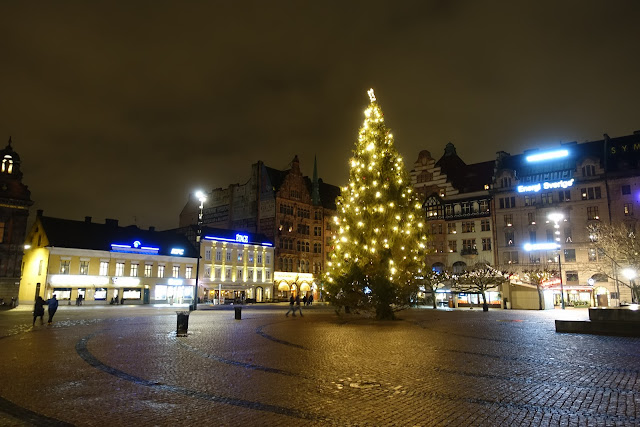 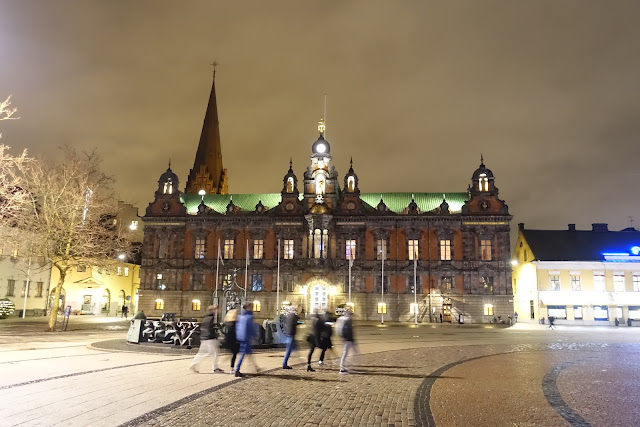 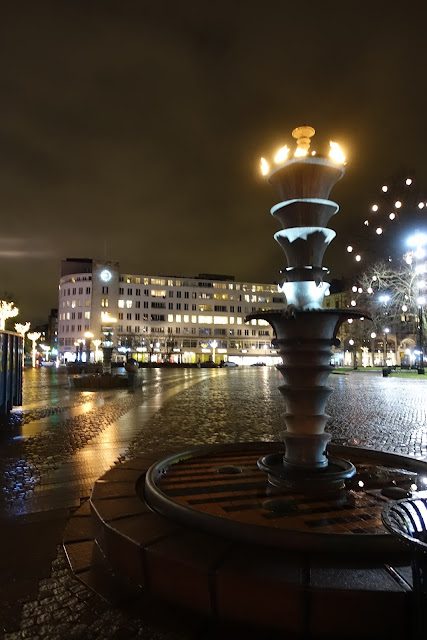 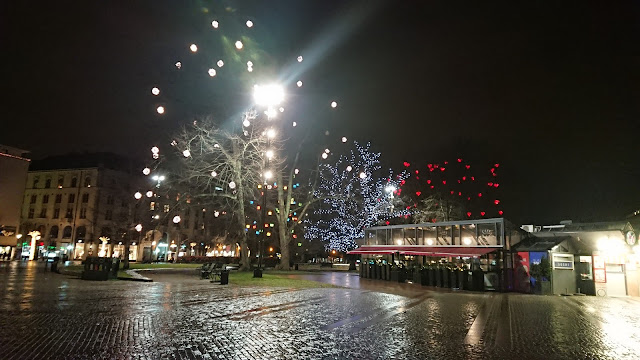 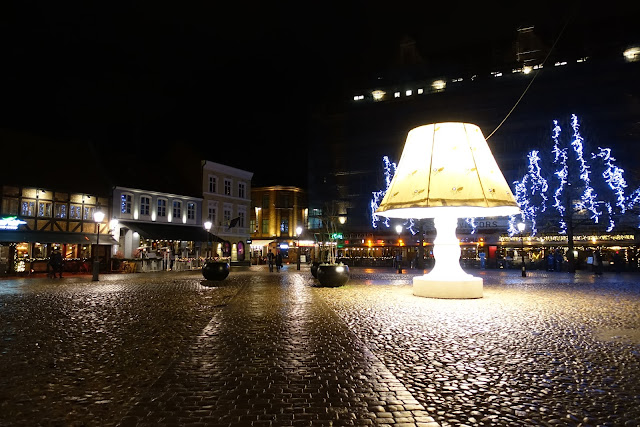 Patrons are still dining on their Saturday night in the restaurants and bars along the streets and squares. But my feet and head will not allow me to keep going any longer, so it's good to collapse into the comfortable bed and finally sleep.