October 05, 2013
We could relax for a moment. The gate lounges at Kuala Lumpur's LCCT were crowded, but our gate was not yet open. Once it was we quickly made out way outside for the long walk to the aircraft. The terminal offered no air conditioned respite from the tropical weather outside and we were perspiring on both sides of the gate.

It's a pity that taking photos on the tarmac is forbidden, because the tropical evening sun cast a beautiful orange-gold light. 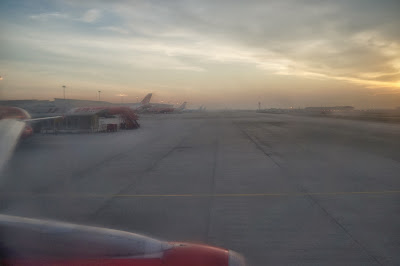 Our flight to Singapore was on an AirAsia A320, the workhorse of a low cost carrier. The legroom was shorter, but still adequate and the width felt greater than their longer cousin we had just flown.

Alex sat at the window and was excited to see the world outside, chattering loudly. Captain Raj gave a detailed, but clear, explanation of the flight, listing runways and routes like an aircraft enthusiast. We launched into hazy grey skies that were soon dark for a very typical hour long flight to Singapore. 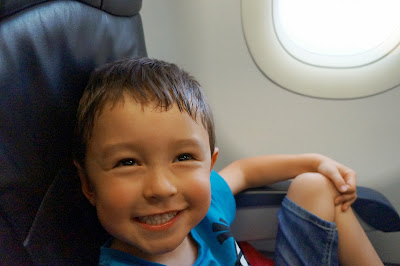 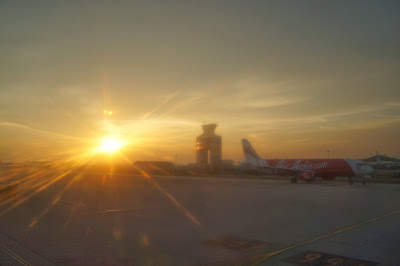 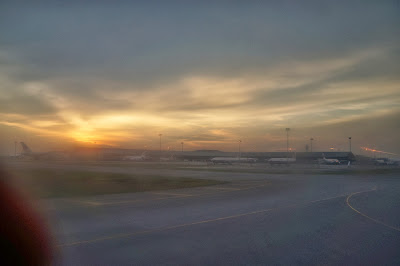 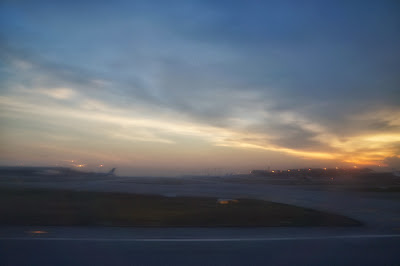 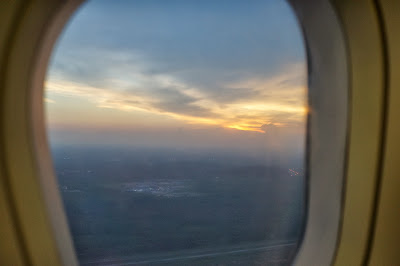 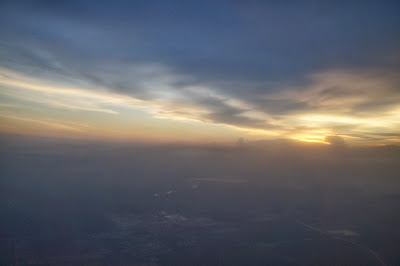 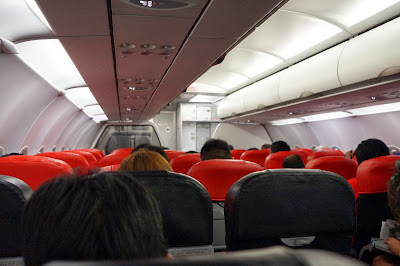 Just after completing a description of our descent from the south Captain Raj announced that our route into Singapore was now to the north via the Malaysian border city of Johor Bahru. Great, roughly twenty minutes just shaved from our flight time! The sooner the better, because we now had to repeat the last transit of rushing through immigration to check in for a following flight. The margin was now more than two hours and I was feeling a lot more comfortable with the connection, though not looking forward to another six hours on board an aircraft. 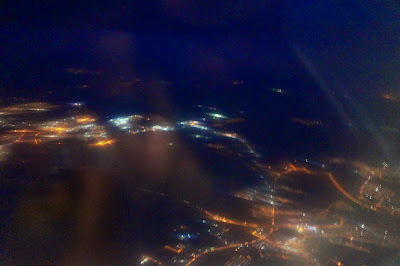 We crossed the straight that separates Singapore from Malaysia and, after a short delay, were soon exiting the gate into Changi's terminal 1. It is fortunate that we are in a transition period while the Low Cost Terminal is rebuilt, because it meant both Jetstar and AirAsia are housed in the same terminal, critical for our short transit.

It was nice to be back at clean, modern Changi. Most importantly, the airconditioning kept away the tropical heat and humidity. Immigration was typically short and we were soon outside in the short web check in queue for Jetstar. Only carrying cabin baggage meant no waiting at luggage belt, a little disappointing for Alex. 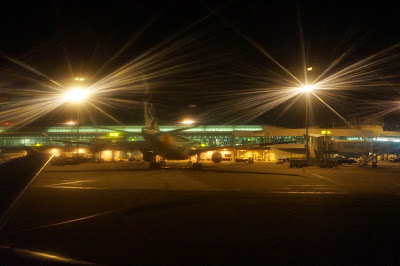 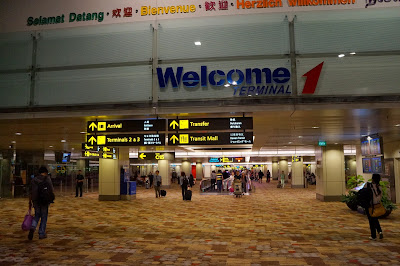 We had three separate bookings for this flight. Due to previous credit Alex and I were in business class, B in economy. I asked if she could be upgraded, but the friendly check in guy suggested that we ask onboard as his supervisor was doing audits.

We were all hungry and tired. The information desk suggested that the local food choices were better post immigration, but we stopped first at Bengawan Solo to purchase slices of my favourite kuih lapis spekkoek cake.

Back through immigration number five our mission was to find food. Fortunately there was a noodle stall nearby a kids play area, so we ordered some okay laksa, mee siam and fishball noodles (for Alex), along with iced milos and grass jelly. While we relaxed Alex, who seemed to have an amazing amount of energy considering the time of night, played on the climbing frames and slides. 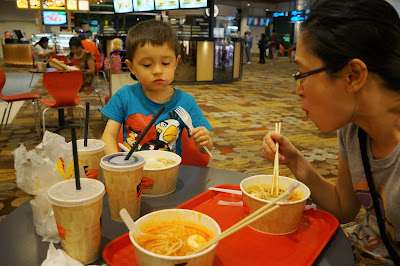 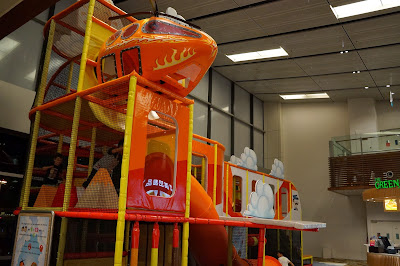 In Changi there are multiple layers of security and we had a second bag x-ray before entering the gate lounge. It was surprising how few passengers were waiting, explaining why the direct flights from Singapore to Osaka will cease in November. 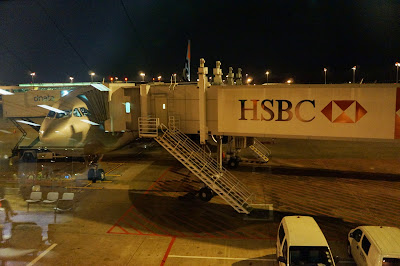 I was delighted to see that this was one of Jetstar's newest A330-200s with built in seatback entertainment, as I have never flown one of these later models before. Unfortunately, the crew refused to let B sit in business class, but I suspect that it worked out better for her in the end, as after take-off she snared four seats to herself and slept virtually the entire journey.

Alex and I were up the front along with only two other passengers. There were pillows, blankets and amenity packs provided, the latter looking nicer than Singapore Airline's packs, from the reports I've read of the airline, even if the seats themselves brook no comparison. 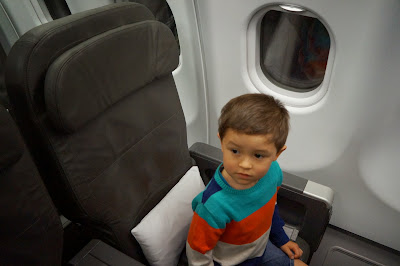 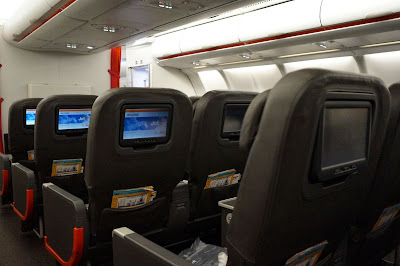 After a complimentary orange juice, the little trooper quickly fell asleep at the window seat. I was absolutely exhausted too and struggled to comprehend the printed menu selections.

Our take-off was delayed by about half an hour due to stragglers and we finally roared into the skies above Singapore after 11 pm local time, or 1 am back in Sydney.

Though I had no complaints about the service from AirAsia, it was very nice to be back in familiar Jetstar. The mainly Japanese flight attendants were very attentive, stopping by for a chat, offering snacks and additional drinks. I was too tired to eat anything much. A supper of sweet and sour chicken went mainly untouched as I just couldn't cope with the strong flavours, even of the acar (pickled cucumber and pineapple) salad that accompanied it. Even the light and fluffy strawberry cake was almost overwhelming and the cheese and crackers remained untouched, though not the fruits. Love my fruit in flight. 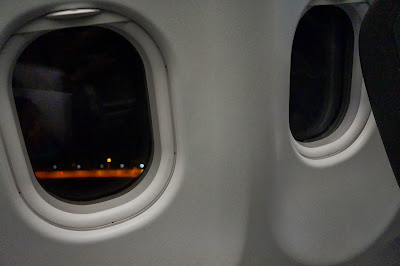 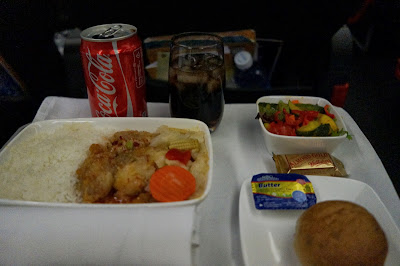 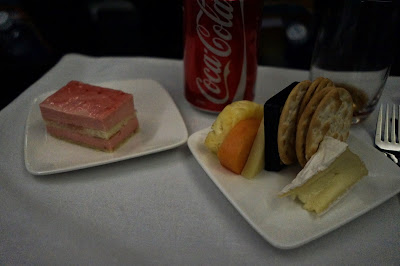 With lights out in the cabin I reclined the seat as far as it went and tried to sleep, the supplied noise cancelling headphones on and listening to guitars on the entertainment system and music on my phone, which was recharging using the seat power supply, a wonderful, necessary feature these days. The screen had my favourite visual flight entertainment, the flight path map.

Maybe I did sleep a bit, maybe not, but I did feel a bit better. Unfortunately, the previous month had all the good movies and tv shows on the entertainment system. I tried watching Man of Steel but I'm tired of superhero movies.

There was a curtained off crew rest on the right rear of business class and a couple of the crew slept in other business seats. But we were never short of service should we want it.

The flight has constantly niggled by small bumps, made worse by being near the front and away from the aircraft's centre of gravity. They suddenly got a lot worse with three hours to go, near Okinawa. The seatbelt lights were switched on and crew ordered back to their seats as we bumped and jumped quite severely. Though the turbulence died down after half an hour, it was still quite strong for much of the rest of the flight into Osaka.

I later saw on the Japanese news that Typhoon Fitow was lashing Okinawa, so I guess we caught the edge of that. Hope Fitow is gone for our return flight via Taiwan because I really didn't enjoy that.

I think Alex might have. He woke up happy and described the turbulence as like a rollercoaster, cheering it along. Afterwards he watch a bit of Monsters University and Bananas in Pyjamas on the entertainment system. B woke briefly due to the turbulence and then went back to sleep. 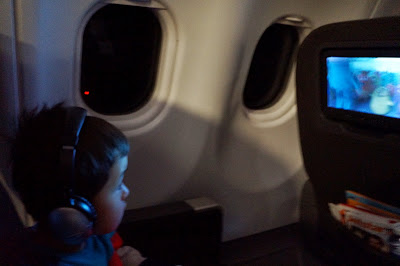 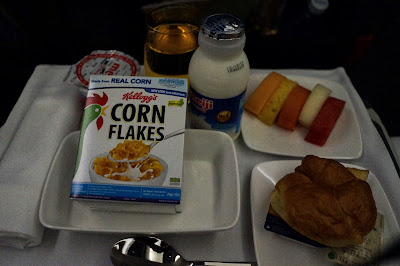 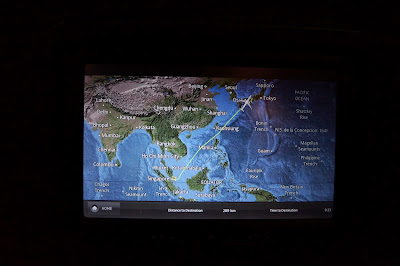 We were served breakfast but Alex refused to eat anything more than a slice of watermelon, refusing the strawberry yoghurt. I had cornflakes and fresh fruit, but was constantly concerned that the glasses of orange juice would be a hazard during a severe bumps, as there were a quite a few.

It was grey skies down to the artificial island that is Kansai International Airport, but it looked surprisingly scenic in the grey and orange sunrise, the colours reflecting off the wet tarmac. Despite the initial delay we we had actually arrived early. 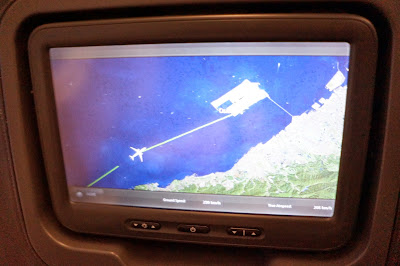 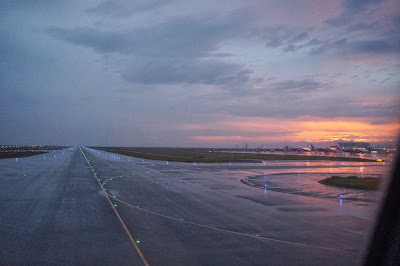 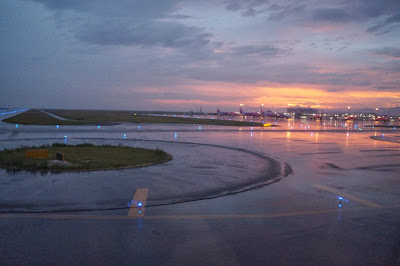 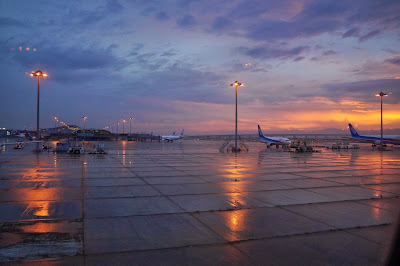 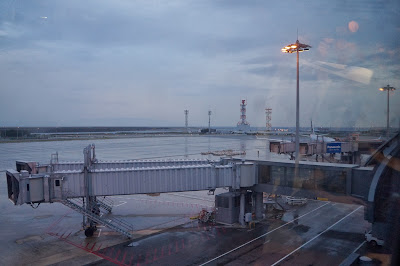