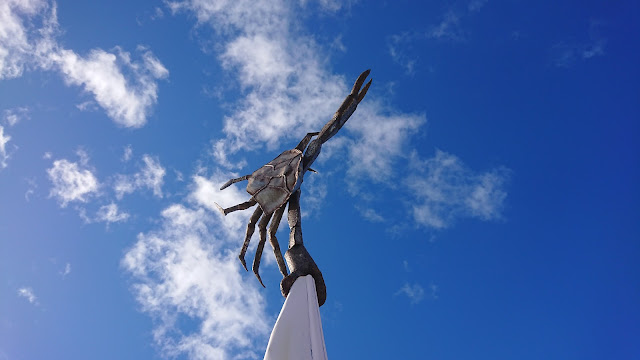 A long weekend and B just wants to get out of the house. Having gone off on my own little adventures lately I can hardly refuse, but the accommodation is mostly either crappy motels or way too expensive. The only one we find is a three-star hotel at Batemans Bay.

We drive down. I'm more interested in listening to ABC Classic FM's Classic 100 countdown of film, television and game soundtracks. I can't figure out how to set the car's GPS while we are on the move. Eventually I setup a second phone to use Android Auto. Can't use mine, I'm using an app to listen to the countdown.

At Ulladulla, we stop for some fish and chips and a seafood basket for lunch. Then onwards!

It isn't far to Batemans Bay. The hotel is really a motel, but furnished really nicely, which suits us perfectly. We take a stroll along the river and towards the town, past the sculptures. The outgoing river water fights with the incoming waves from the strong winds off the coast. 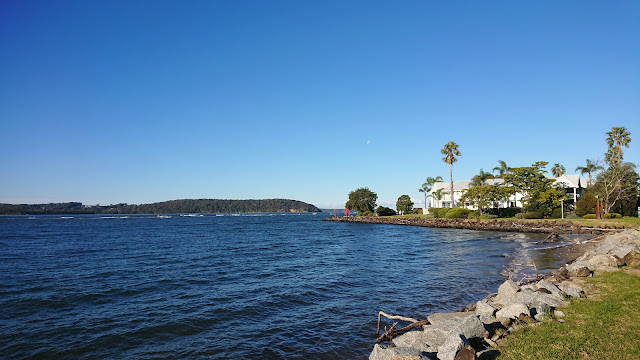 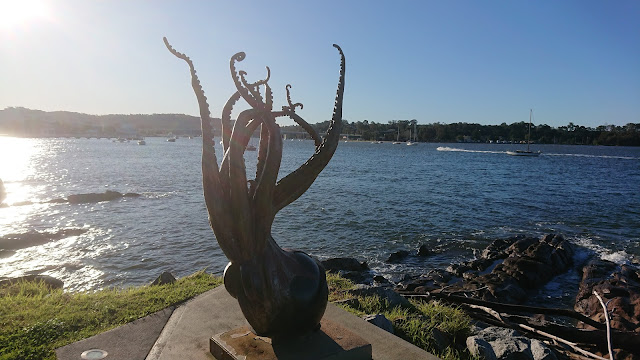 The shops along the main street are mostly closed this late on a Saturday afternoon, so we head back to the hotel. Alex must spend this long weekend writing up a gothic story for school. I'm still listening to the Classic 100.

B has made a reservation for dinner at Stingray. This time we drive into town. The pasta dishes are terribly disappointing, especially considering their price. One the way out we stop at a nearby shopping centre to buy a few groceries from Coles. Though shaded, this is not an enclosed shopping centre and the night air is bitterly cold.

The hotel television has Netflix and YouTube, but we watch a movie on free to air. I've been trying to get B to watch Red for ages! Perfect movie for the night.

I sleep well on the firm bed. Listening to the second day of the countdown, I leave the others in the room and cross the road to the marina, walking along the breakwater to Pelicant, a sculpture of a crab pinching the bill of a pelican. 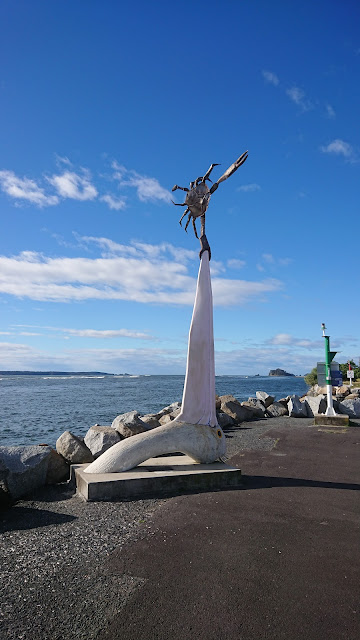 Mark Knopfler's music from Local Hero is playing on the countdown. Ubiquitous in the eighties, I know it, but never knew it was from a movie.

When I return the others are upset at my long absence and demand to go for a drive. We head south along the coast, stop at beaches and lookouts, watch the huge waves crash against the rocks and shore. 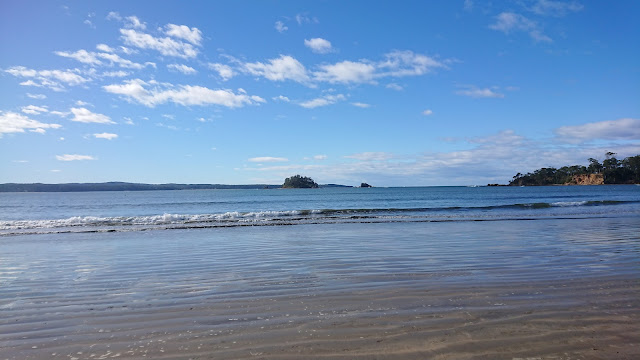 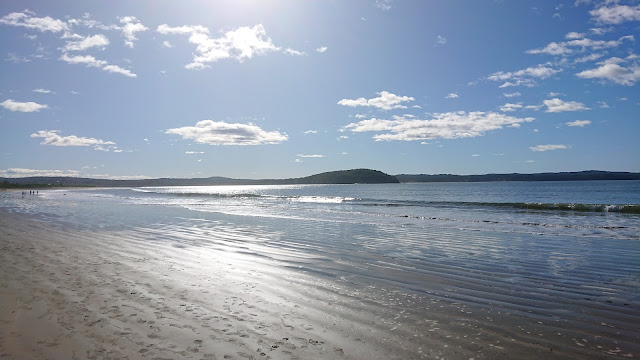 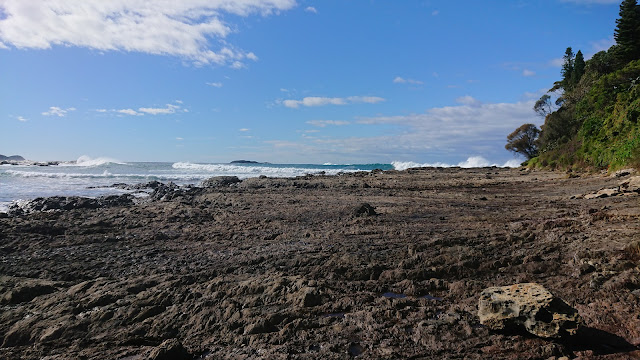 I pull into Malua Bay and suddenly realise that we know the restaurant in front of us, Raymond's at Malua Bay, from Chopsticks or Fork?, a series on the ABC. Why not? We're hungry.

The lunch specials are pretty good and I can't help ordering a fried ice cream. It's been so long! 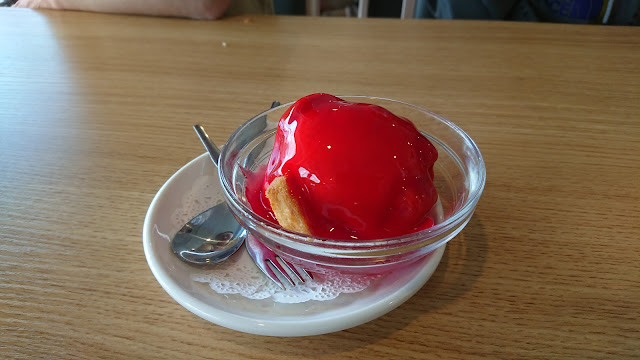 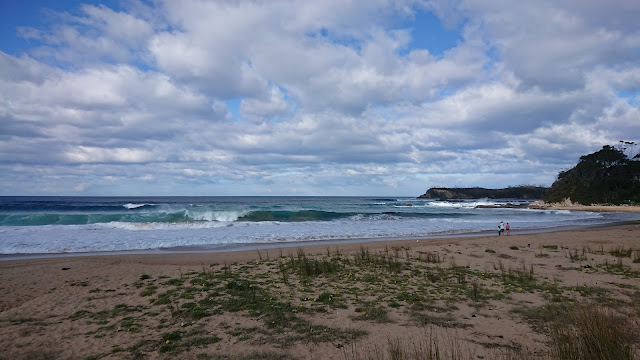 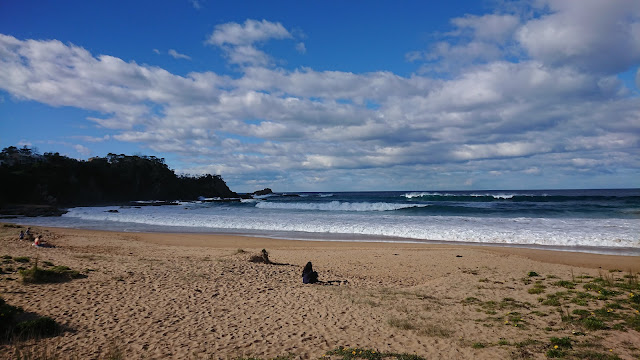 After some time admiring the waves by the beach, we head back to the hotel and Alex continues writing and complaining about writing his assignment.

Star Wars rightfully wins the countdown and I am ready to head out to dinner. I chose Roy's Fish and Chips just up the road. Alex orders a fish burger, I want to choose from their Sri Lankan menu. A tuna curry with yellow rice. It has curry leaves, which is good, tastes like a curry. Ultimately though it was a meal for one, not to be shared between B and I. 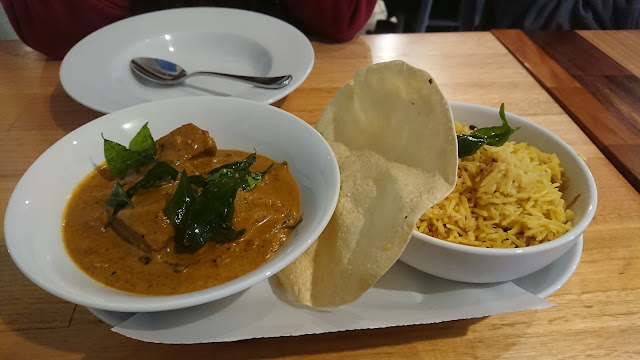 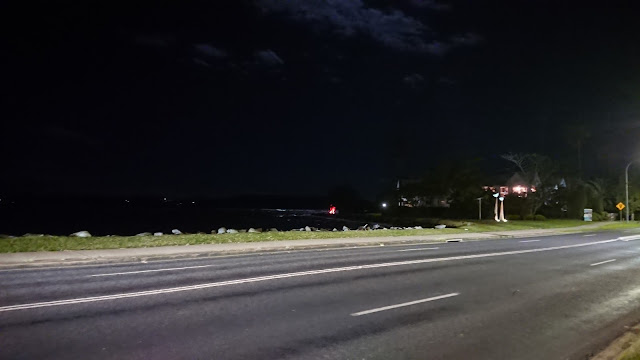 At 9.30pm she is still hungry and I am sent out to McDonalds for an apple pie and sundae. The wait is long and confusing at the drive through and they only have a single apple pie. It's past 10pm when Alex and I get back.

We check out early in the morning and set off for our return to Sydney. It's a prettier ride today, through eucalypt plantations, the historic town of Milton, and the bright green dairy pastures. In the background the ridges of the Illawarra Escarpment.

This time we make a stop at Berry. The long queue at the Doughnut Van and Bakery put us off. We eventually eat a hot breakfast in a quieter cafe before heading off again. One day I'd like to return to Berry midweek without the crowds that have accompanied us each time.

Home again to housework and and my siblings requesting our presence at their school musical and my mother arriving tomorrow, along with the stress of regular work. Makes me want to head off again.