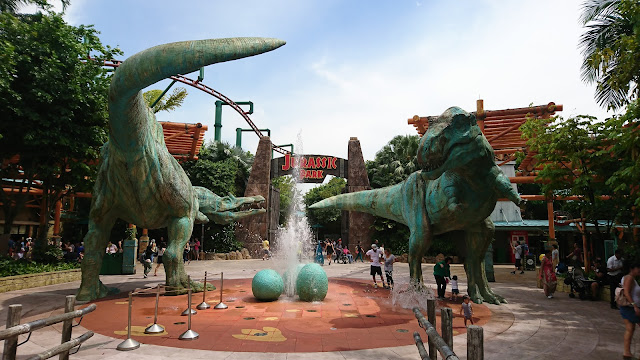 Dinosaurs evolved into chickens, so I guess that makes me a dinosaur. There I was, lost in the Lost World, wilting under the Singaporean heat and humidity, watching and waiting, not participating.

I wait for the next ring full of screaming people to slide down the slope and make a big splash while John Williams' music repeats. Here they come!

No, it's not them. Delete the photos. 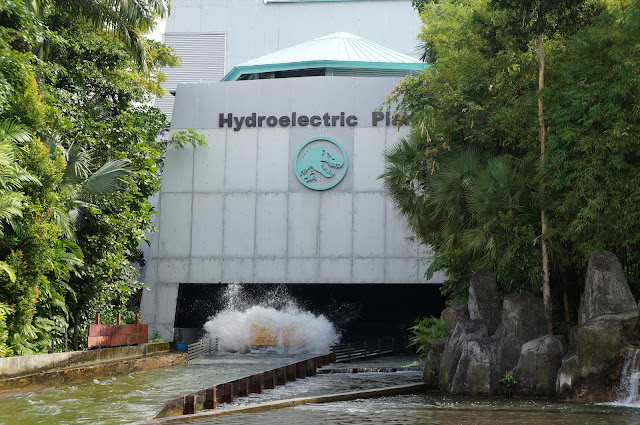 If I'm not going to join them then I have to at least photograph them having the fun I wouldn't have.

We are at the Universal Studios theme park on Sentosa Island. This is the second Universal Studios we've visited, after Osaka. That one had Harry Potter world with its addictive (but non-alcoholic) Butter Beer.

The day started the usual way, with Alex awake too early and a walk down to the Marine Parade hawker stalls, for some popiah, chicken rice and nasi lemak. The food seems to have improved. 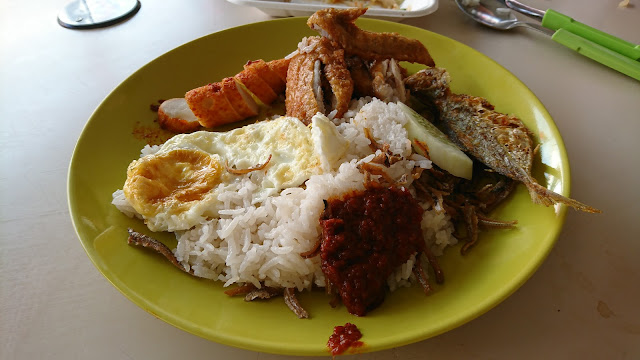 Whilst there is no MRT station in Katong, the bus services are quite convenient. We all hopped aboard a double decker bound for the Sentosa gateway. It was an interesting ride past many impressive high rise buildings, their design far more creative than the usual Sydney dross. Then down along the huge port area with row on row of cranes transferring the arrays of crates between the ships. 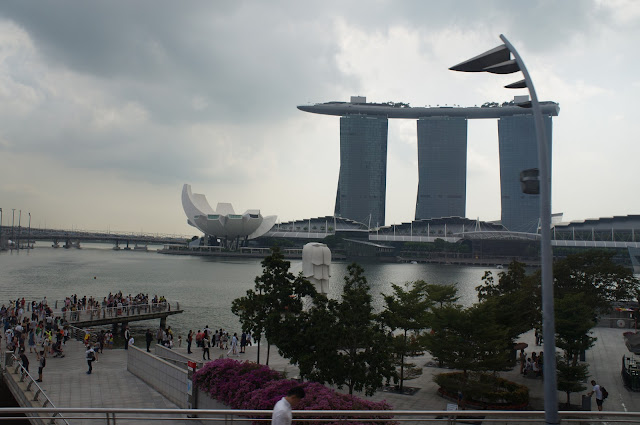 Sentosa Island, like most amusement areas, is expensive. So is Universal Studios. Let's not mention that further.

The Sentosa Express monorail carried us across to the island. There were no queues at the Universal Studios entrance, the big world slowly turning like the introduction to their movies.

Red lanterns were strung below the canopy over the Hollywood streets in celebration of the upcoming Chinese New Year. As in Osaka, we had a lunch of hamburgers and chips at Mel's Diner. A mistake, because local dishes were available later on at The Lost World food centre. 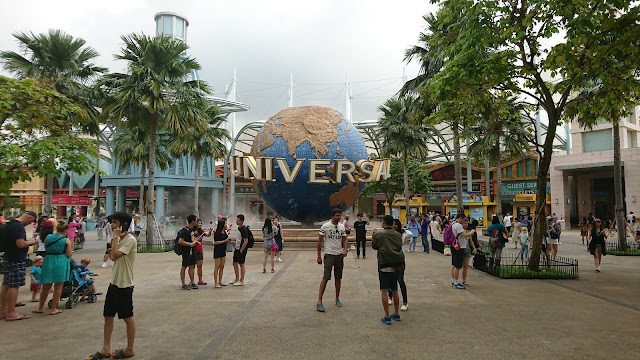 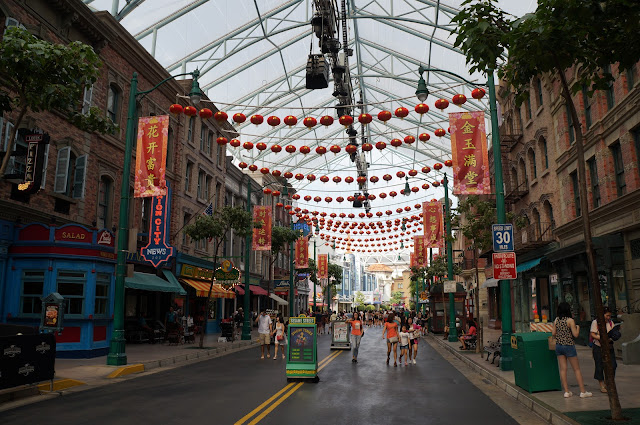 The first order was to watch the Waterworld show. That meant hurry beneath the scary Battlestar Galactica rollercoaster, one suspended, the other seated, both twisting and racing in a terrifying way. 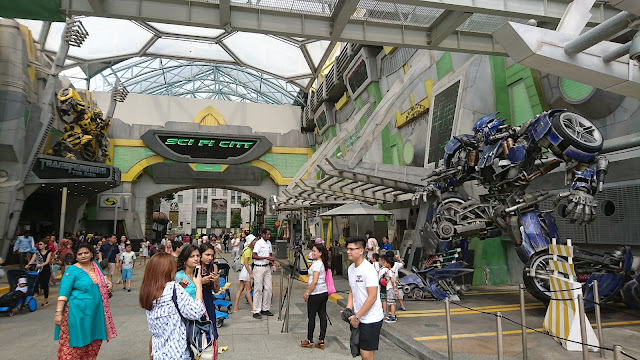 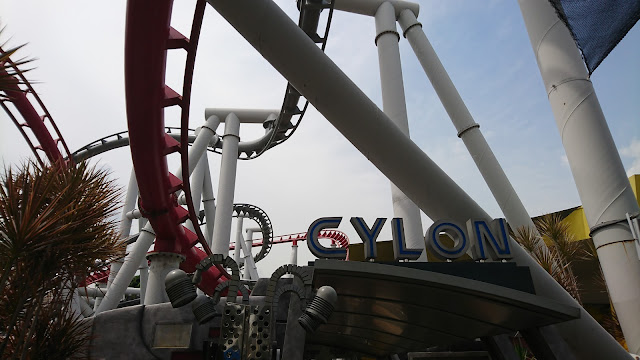 I wonder how many in the crowd have actually seen Waterworld, the hugely costly and unsuccessful Kevin Costner Mad Max on water movie. Those in the front rows got squirted and splashed as boats and waterskies raced across the pool, pyrotechnics exploded and actors jumped and swung. 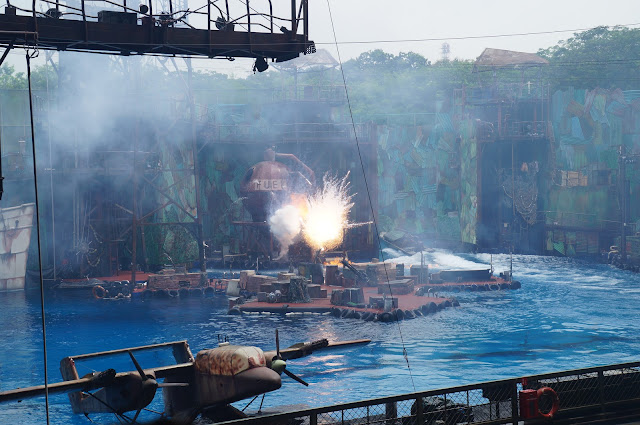 Alex and B caught every ride at The Lost World while I stood and watched. I can't even cope with an aircraft ride anymore. Neither of them took the faster rollercoasters elsewhere in the park, Alex having decided that he no longer likes them.

I like the fantasy landscapes of these amusement parks. The Ancient Egypt structures and statues were the most impressive, but ultimately there was not much you could do there. The park would have been attractive at night, but we were off to meet the others for dinner so had to cut short our stay. 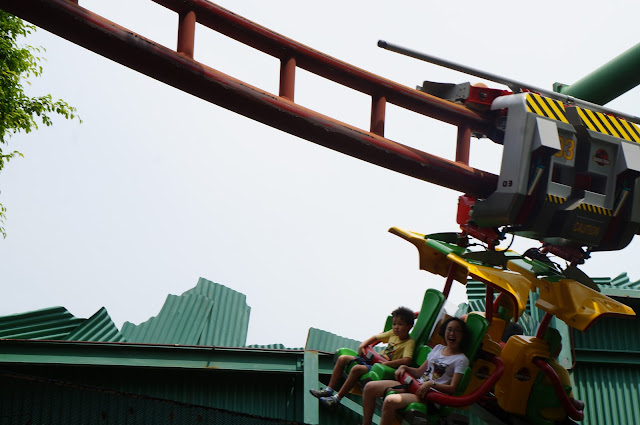 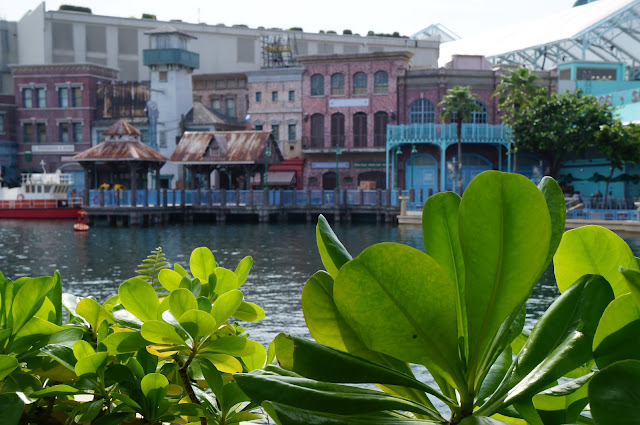 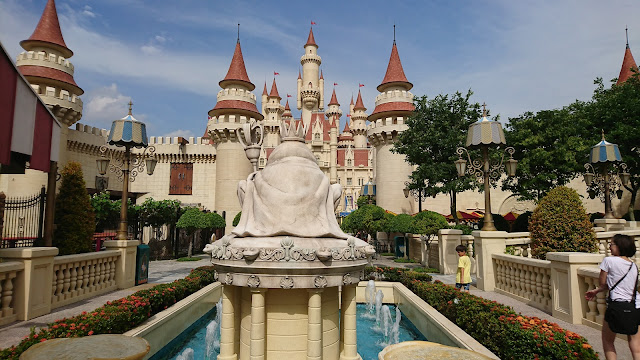 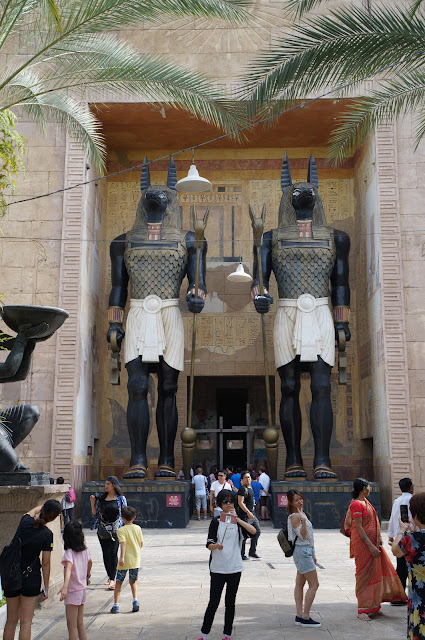 Alex insisted we catch the cable car back to the main island. We caught the monorail to the Imbiah stop, but, when shocked by the cable car price, the attendant suggested we wait until 6pm when the price drops. So we wandered around the giant Merlion statue and Gaudiesque mosaiced water features, Alex fascinated by the twisting flow. 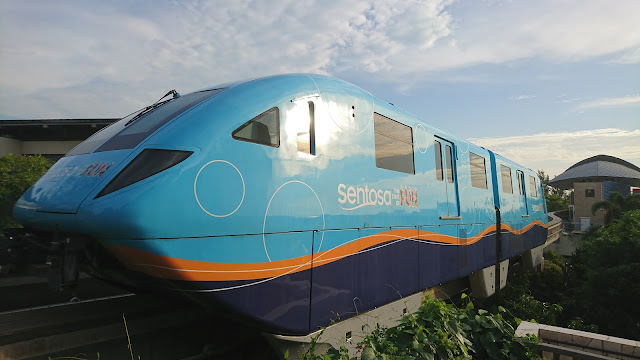 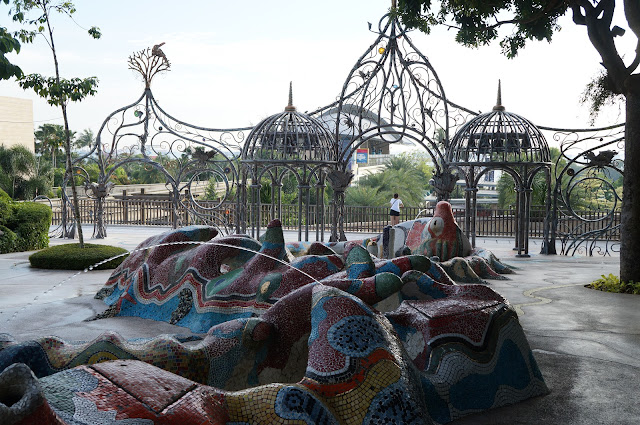 The cable car has two separate lines. We caught the Sentosa Line to Imbiah Lookout, then changed to the original Mount Faber Line. The views out ther window were incredible. On the right views of the city and ports, on the left the evening Sun shimmering across the strait. Below us a big cruise liner. 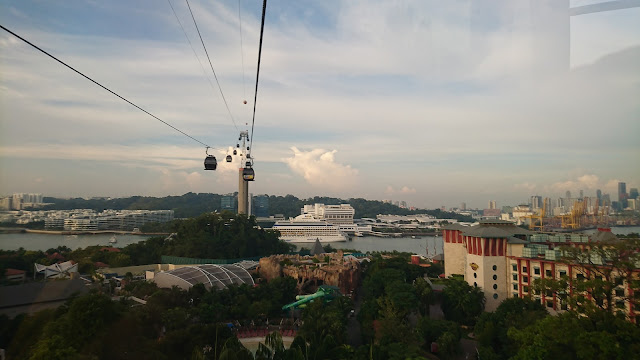 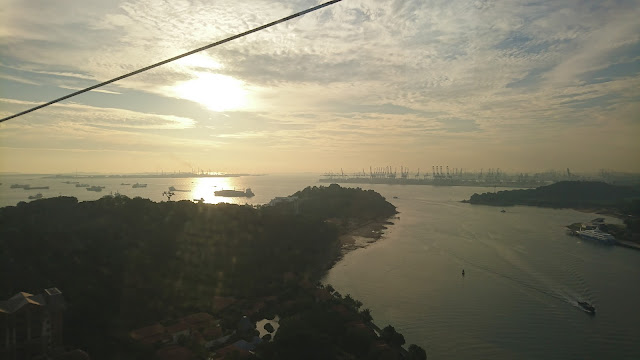 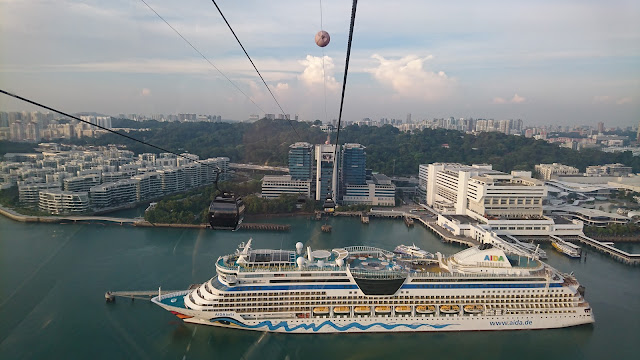 We didn't do the whole trip up to Mount Faber, instead alighting at Harbourfront, where we transferred to a bus toward our destination of Old Airport Road food centre.

Along the way we passed the abandoned Tanjong Pagar Station, once Singapore's terminus of the railway line that stretches up into Malaysia, Thailand and beyond. The station itself was actually owned by Malaysia, a source of irritation to Singapore. After a land swap Singapore closed the old station and moved the terminus closer to the border at Woodlands. And so a wonderful piece of history is left empty, the tracks mostly torn up, a faded sign advertising nasi lemak remaining on the Art Deco exterior. 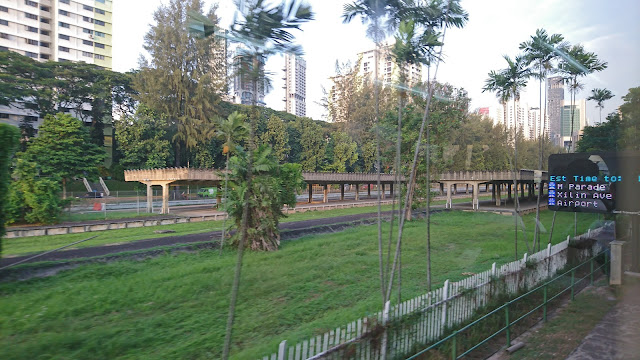 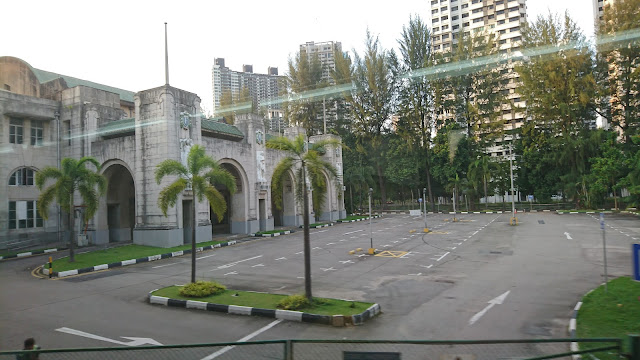 I stopped here once, after returning from Butterworth (Penang) on my first overseas trip back in 1995/96.

Poh Poh and Keith had trouble convincing a taxi to take them from their Tanjong Pagar hotel to the Old Airport Road food centre, and when they finally found one it took them to the wrong one and they had to walk the rest of the way. 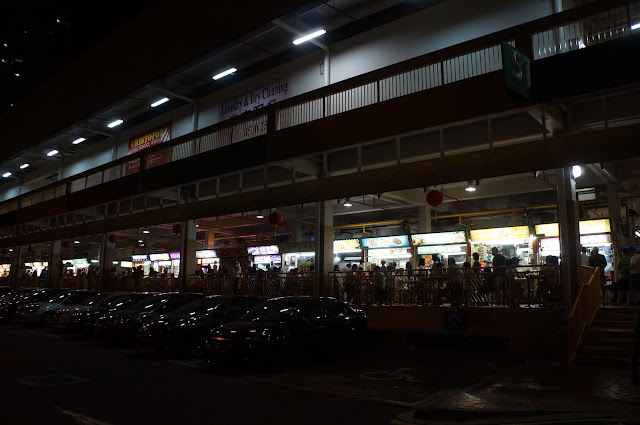 We finished off the day with satay and grilled seafood, then went our separate ways. 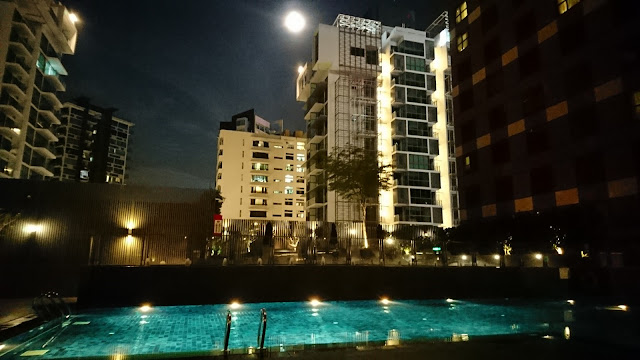 After we returned to the hotel we wandered down to the poolside cafe for our free drinks, sipped lime juice and lemonade under the full Moon and the constellation of Orion. I don't trust amusement park rides and I don't trust the skies. Yes, I am a chicken and chickens are bad flyers.