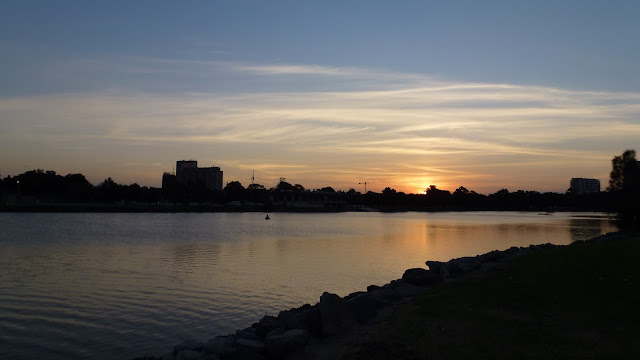 My lonely hotel is lonely no more. It began life as a Hilton Hotel, sitting near the bridge across the Cooks River and overlooking the International Terminal of Sydney Airport. A brown and boxy building, I never found it particularly attractive but, as a young and inexperienced traveller more familiar with roadside motels and caravan parks, the Hilton brand gave it a mysterious cachet. We often passed the hotel on our way to the city or the Eastern Suburbs and I would wonder who were these important people lurking behind the curtains, the gold tinted rectangles in the night? What adventures were they about to set off on?

I developed a "thing", almost an obsession, for airport hotels, especially those of Sydney. An airport is a living place, full of movement and action, huge machines and people setting off on adventures or arriving home from them. Yet it also stands in near isolation. In the region surrounding Sydney Airport are warehouses and container yards, golf courses and sports fields and the waters of rivers and the bay. And a few hotels.

The hotels near the airport are not bases for exploring the city or the nearby surrounds. There is nothing much to see or do nearby. Apart from the odd conference the occupants of these hotels must surely consist mostly of passengers with early flights, those who are delayed and those in transit.

That has been us. I have written before of my love of the transit stop and of nights in an airport hotel. A hotel, for us, is so often merely a place to rest one's head between exploring, shopping, eating. It is barely seen and enjoyed, seldom a restful place. Even before a holiday can begin there is the panic of packing, the fear of forgetting, the race to reach the airport on time.

There is something about being holed up in such an isolated hotel by an airport where there is no imperative to leave before your flight, no need to explore, where even your meal is probably limited to the hotel restaurant.

Imagine arriving after a whole day sitting inside an aluminium and carbon fibre can at 12 kilometres above the Earth. You are exhausted, have a headache simmering below the surface and despite the dry cabin air and the complete lack of exercise you feel sweaty and dirty. You arrive late in the evening into an airport and a city already preparing for sleep and you want to join them. And tomorrow you have to repeat the exercise all over again.

Sure you've got a night in the city, but all you really want to do is hop on that minibus for the short ride to the hotel, whip off those constricting shoes, wash away the grime with a hot shower and go to bed. That is the transit hotel.

I remember the first time I encountered the idea of a transit hotel. It was a service for passengers of Asiana Airlines flying from Sydney to Frankfurt or London. As passengers were forced to overnight in Seoul the airline offered free accommodation as part of the ticket.

However, we instead flew a combination of Asiana and KLM and were thus ineligible for the free accommodation and had to select our own hotel. As a consequence we were up until 2 am exploring the night markets of Dongdaemun, a wonderful experience but definitely not restful!

Since then and thanks to early departures and late nights I have stayed in more than a few transit hotels and many of the hotels surrounding Sydney Airport. From the unpleasant bareness of the Formula One, now Ibis Budget, to the snobby Stamford. Our wedding night was at the Novotel Brighton Beach in a room with views of the airport runway and Botany Bay.

Though none of the hotels will likely feature in the annals of grand hotel literature, each has its own character, its own memories for us. 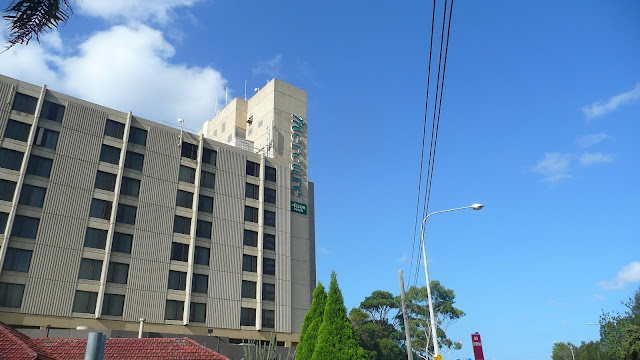 The Hilton long ago changed hands and joined the Accor chain as a Mercure branded hotel. We still drove past it occasionally. Now and then we stopped by to let our son Alex play in Cahill Park and the Tempe Recreation Reserve by the river, to attend a wedding at the Rowing Club.

That's about all the was in the area. Car dealers and repairers alongside the Princes Highway, houses and a hidden motor inn, the airport, of course, the river and parkland. And the multistorey Mercure Hotel standing out in the middle of it all, at night its bright pink sign shimmering in the mirror waters of the Cooks River.

From outside you can hear the sound of jet engines and turboprops arriving and departing, nuzzling up to their gates and a breeze brings the odour of kerosene mixing in with the scent of salt and mudflats of the river. The road past the airport is busy, but there are few people fishing along the river banks or kids climbing in the small playground.

Here was a place where you could mix the excitement of staying beside the airport, the origin of adventure, with a quiet walk by the river to calm the nerves before the flight. 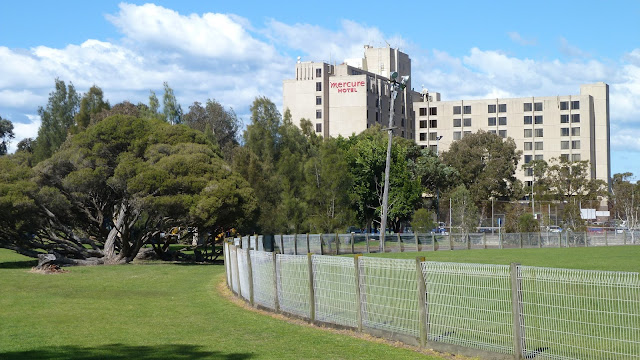 Though we did eventually have our stay at the Mercure, the late arrival and early departure meant there was little time to take it all in.

I regret now that it was not longer. We revisited Tempe Park, across the river opposite the hotel, with its playground, sports centre and public barbecues with families cooking sausages, kebabs or foods more exotic.

Mixed in the sometimes raucous celebrations of birthdays and reunions I heard, smelled, felt and saw the busy airport operations just across the road. I was transported back to the time when air travel, especially of the international sort, was a rare experience to be greeted with excited novelty rather than a sense of resigned familiarity.

I was jarringly returned to the present by the view across the river. No longer does the Hilton/Mercure stand alone. The inexorable march of the apartment tower has finally spread to the area and surrounded the hotel with scaffolding and concrete. No more will there be views inwards, though one could still look towards the airport.

There are still no shops, no more restaurants, but even they are growing a mere ten minutes walk away in nearby Wolli Creek, itself an expanding conglomeration of high rise apartment blocks. 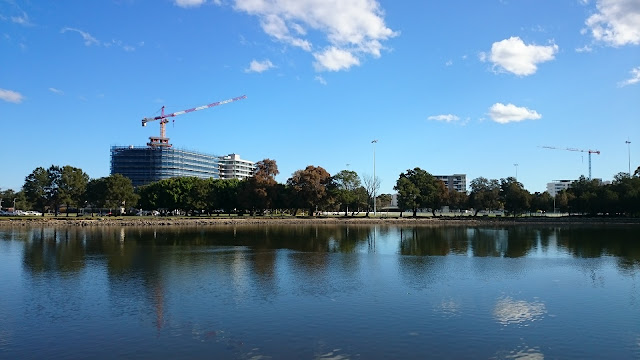 The hotel itself has lost its position as the closest accommodation to the international terminal. Now a Rydges Hotel sits on the site of the airport itself. Fresh, clean and modern it lacks character but makes up for it in utility.

Other accommodation has sprung up closer to the domestic terminal. Quest Apartments, a Sofitel being built right next to another lonely hotel in the Ibis.

Warehouses disappear, convenience stores and cafes take their place beneath rows faceless apartments. No longer isolated pockets of people, the hotels will be part of normal life.

No doubt most residing in the hotel will be glad of the opportunities. For me, I feel like a little fantasy has been subsumed by the ravenous and unstoppable horde of property developer. But that's progress, eh?