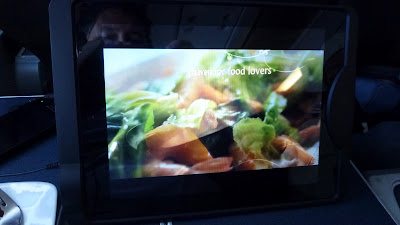 As anyone who has trawled through my photos would know, my favourite inflight entertainment is the window. But on those dark nights over the ocean when there is nothing to see outside and I can't sleep there is nothing better than watching a movie. It doesn't have to be a good movie; in the oxygen starved environment of an aircraft cabin even a bad movie can be enjoyable. Light, fluffy, mindless action, slightly crazy, it's amazing what is watchable at 30,000 feet up.

What I don't want to watch, let alone pay for, are the entertainment offerings of the low coast carriers. I joke that on Jetstar it's always a Steve Carell movie, but at least their long-haul flights have free cabin screens, though movies about the invention of the windscreen wiper, endlessly looped Two and a Half Men and surf sports are not to my taste.

Scoot have just posted news about their new inflight streaming entertainment where you can either bring your own device or hire an iPad for the flight. I was curious to see what's on offer [pdf] for our upcoming flights in March, seeing as they have absolutely no other form of cabin entertainment and both B and Alex will need amusing.

Surprise, surprise, it's not so different to Jetstar, but as befitting Scoot's poorer comfort levels, worse. There's a Steve Carrell movie (Date Night) and Two and a Half Men, a show barely worse than The Librarians. Bridget Jones' Diary was funny when we saw it on our honeymoon flight back in 2001, but the DVD has been sitting unwatched for a long time now. Black Swan was responsible for a midflight emotional meltdown a couple of years ago. I've read that it's a movie nobody would watch a second time.

Maybe Alex would like Rio and a bit of Tim Burton's Corpse Bride might be more my thing, but I think I'll  be continuing the arduous process of converting our own videos for the iPad and Android devices, along with card games and stories. I had the (fastest in our house but now too slow) computer running all night and all day with the first batch, then it had the temerity to shutdown without warning before they were all completed. What I really want from the IFE (and this should be possible through streaming!) is the flight map. If only we were flying on a proper airline...