Chiang Mai to Bangkok by a very slow train

March 28, 2011
It wasn't the longest railway journey that I've been on, but it felt like it was. It wasn't the worst train ride either (that was in China), but it was getting close to some of those horrible overnight train rides between Sydney, Brisbane and Rockhampton when I was a student. A two and a half hour delay in the middle of the day is tolerable, but when its stopping you from eating dinner and going to bed it feels like an eternity.

When I booked the "Express" Sprinter service between Chiang Mai and Bangkok's Hualumphong station I thought "Great! We can see a large chunk of the Thai countryside and save a lot of money while having a lazy day in a train."

I wished we'd paid for the flights.

The journey started well enough. We said goodbye to the staff at the Manathai Village, dragging Alex away from his beloved fountains, and were driven by Khong to Chiang Mai's train station. There's a steam train on display out the front, a tall water tower (many Thai stations seem to have retained them) and a variety of restaurants around the place. I bought some snacks and drinks from the station shop - the prices were quite reasonable - then we boarded our three car diesel electric multiple unit (DMU). 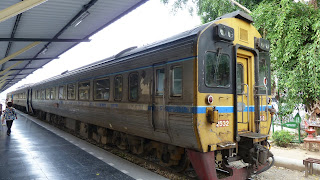 These DMUs were built by Daewoo and are about 15 years old. They seem a lot older than that. The (old) airline style reclining seats are comfortable enough, but the interior is all grey metal from an earlier era of train design. The battered exterior doors don't close properly and the whole thing looks like its seen better days, though the lead unit was brightly painted on the outside.

Maybe its all the bumps along the way that do it to the train. You expect rail journeys to be relatively smooth, but in Thailand they seem as rough as the roads.

We chugged and lurched a little late out of the yards at Chiang Mai while Alex sat on my lap. An unsmiling female attendant came through the carriage pouring cups of Coke, juice or water, along with a banana biscuit. Once we were out of Chiang Mai the countryside was dry rice paddies. Then we climbed up into hills of near bare tree trunks, the land looking dry and dusty. It's burning season for the farmers and their air is brown with smoke haze. It was not particularly enjoyable scenery. 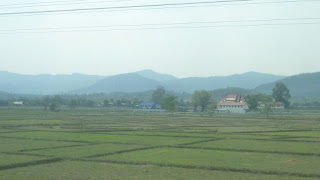 Around the towns that we passed things were a bit greener, with banana palms surrounding wooden homes on stilts, open fronted shops selling food and necessities, fixing the ever present scooters and motorbikes or some other unfathomable business. The town stations were always immaculately presented, with pretty gardens and statues, no matter how small the town. 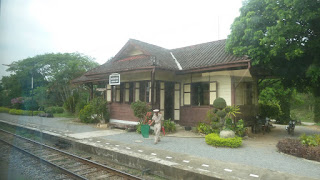 Alex soon fell asleep on our lap, lulled by the chugging and the rocking. 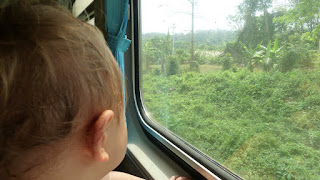 Some of the many train staff got out and inspected the train. There seemed to be something wrong with the engine, but nobody was saying anything. After a whole hour of just sitting there they seemed to fix the fault and we were on our way again.

Each time we came to a station we would stop and let another train going north run past us. It's mostly single line between Chiang Mai and Bangkok. There were plenty of freight carriages in the yards, but I don't recall seeing a freight train. Mainly third class locomotive hauled passenger trains, the carriage windows open to provide natural airconditioning for the straight backed, often unpadded, seats.

A warmed up lunch of rice with a fish cake and small side of ginger chicken was handed out to each seat. Each time a new passenger joined the train the lady would come out and hand them their lunch pack. It wasn't particularly good food, but it was edible. We shared the two packs between the three of us. 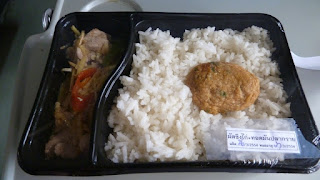 Eventually the scenery became slightly more interested as we passed through the hills and out the other side. There were rice farms with paddies of water and Brahmin cattle with their huge lumpy necks, tall coconut palms and big clumps of towering bamboo. Many towns had an ornate Buddhist temple, each with a tall chimney for the crematorium. Many also had parks with elaborate exercise equipment made from welded tubes. I don't know how much room there is for Fitness First here. 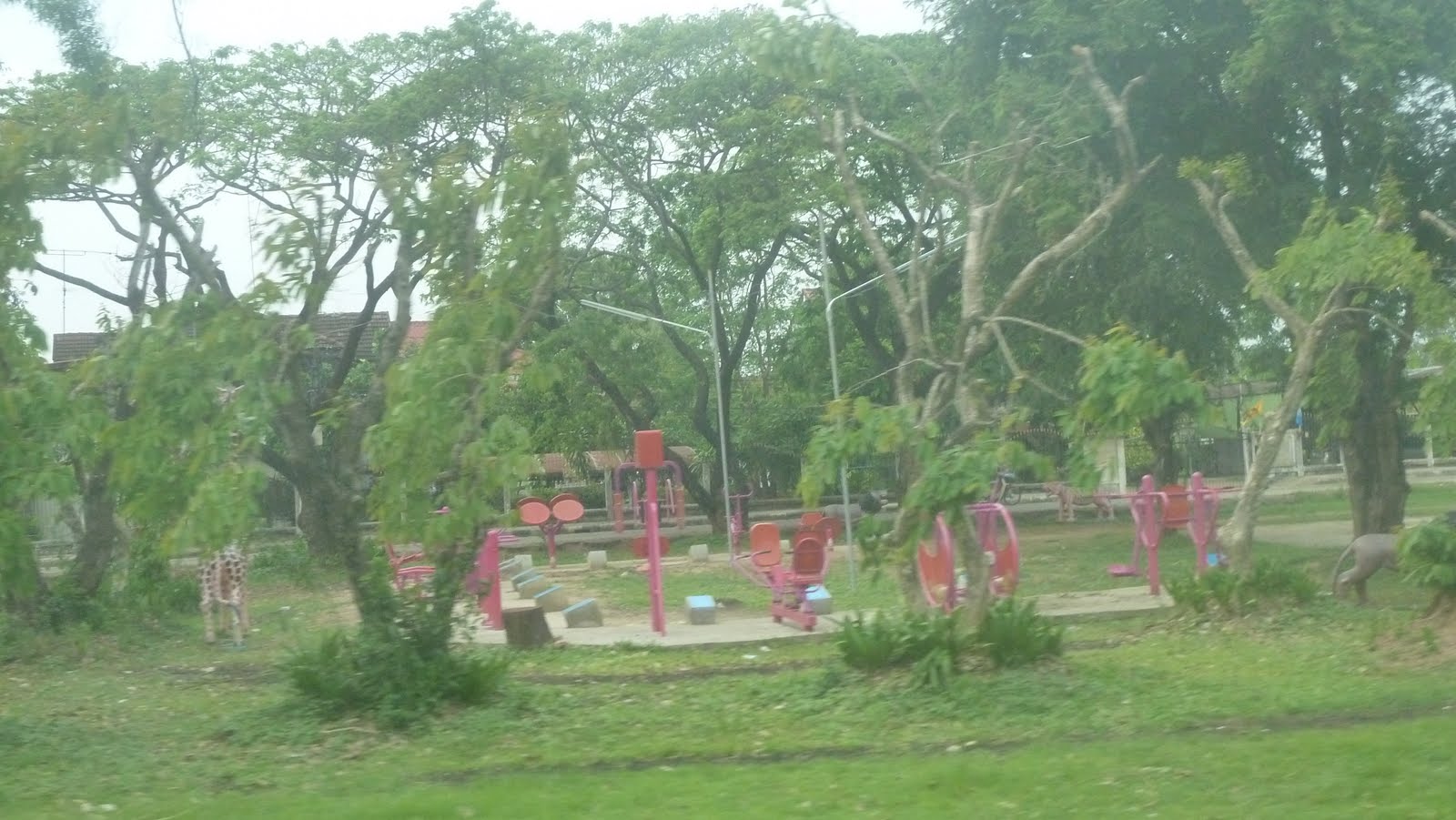 At Uttaradit there was a dinosaur theme going on with dinosaur sculptures in the local park and pterodactyls guarding the entrance to the local temple.

The train ride was scheduled to last eleven hours and forty minutes, but when we checked where we were by half-time we realised that we weren't even close to having completed half the journey. It was terrifying to see how much further we still had to go.

Yes, the countryside changed for the better with verdant green paddy fields, real jungle on the mountains and brightly lit stalls setting up for the evening's trade. Alex was happy, though demanding to go to the toilet quite frequent ("Somebody else go to toilet!" he would stand up and cry whenever the door was opened). The toilets were okay, one squat and seated, kept fairly clean by use of a hose. They emptied straight on to the track so far as I could tell. 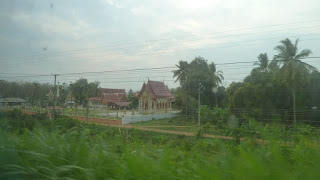 The Lonely Planet covers very few towns on the railway line. You realise just how poor the guidebook can be if you are not an adventurous (but non-local food loving) backpacker who likes jungle treks to remote villages but doesn't care how most locals really live. To be fair, most of the towns probably don't have any tourist accommodation, but when we approached Phitsanulok, one city which is listed, I asked B if we should just get out there, find a hotel and fly down the next day. "It's supposed to have some great market food stalls." I said.

But no, she replied, might as well go through with this. I think if I had asked her a couple of hours later then I might have got a different answer. 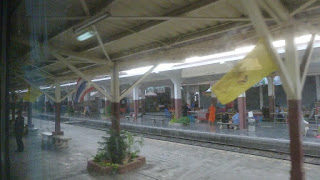 Instead all we had to eat were a small square of strawberry cake handed out by the attendant, and the coconut biscuits we brought ourselves. Later in the journey a kind passenger taken by our smiling Alex handed him some sticky rice wrapped in banana leaf. He ate quite a bit of it.

As darkness fell Alex slept while B and I just tried to endure the ride. Outside was mostly blackness, save for the lights of street markets and temple surrounds.

We stopped at quite a few suburban stations, each one prolonging the agony. There was so much life around some of these; passengers waiting, markets hidden away to each side, stalls selling food.

10 pm said the one of the train staff, when we asked earlier about our arrival time. As we crept closer and entered Bangkok's environs this changed to 10.15. When we finally arrived at Hualumphong station it was 11 pm. We couldn't wait to get out. 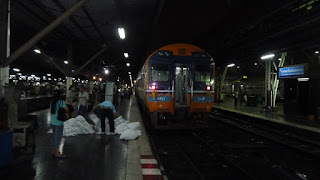 We dragged ourselves over the taxi stand and accepted a non-metered ride, after some haggling. It was a blessed relief to check into the hotel.

Though B and I were hungry, tired and all stuffed up with our cold, Alex was bubbling with joy. At last, after three days without them, he had lifts again! And fountains in the lobby!

He had been absolutely incredible on the train ride. Almost no complaints, no running through the aisle, no complaints about being hungry. He's an amazing traveller.

While B bathed him I ran down to look for some food. Nothing seemed to be open, no food stalls anywhere, except for a 7-11. So it was microwaved hamburgers and "steamed" buns for dinner. But who cares, we were just hungry, tired and sick to death of trains.