October 29, 2010
Once upon a time I had to spend an entire night waiting in the carpark on Rockhampton airport as floodwaters rose around us. It was free then, but now the airport has joined its illustrious larger cousins in charging for the privilege of a parking spot.

So Mum dropped us off and waved goodbye. Our brief visit had been quite pleasant and I am actually curious to see how the rest of Rocky has changed during the last six years. I still wouldn't consider it an actual holiday destination however.

I'm always amused by the regional airports that foresee themselves become international gateways. Strictly speaking, Rockhampton already handles international flights, but these are charters bringing in the Singaporean military for exercises at Shoalwater Bay. I can't see the city ever getting scheduled international flights. Despite that, I was quite impressed by Rockhampton's airport terminal. For starters, the toilets were better than those at Changi's Terminal 1! 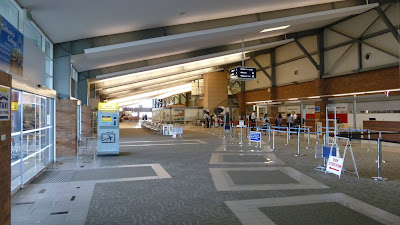 There have been changes since I was last there. The basic shell remains the same, but the observation deck, where I once gave a science club talk on travelling to Mars, has been turned into offices, with the observation room (at least it still has one!) at ground level. There's a newsagency selling snacks and souvenirs, an Eagle Boys pizza outlet and some other hot food outlet. 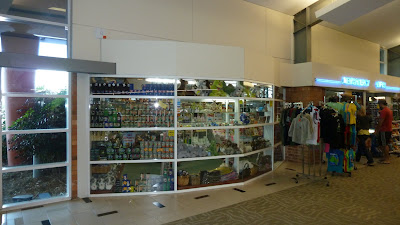 As we had recently eaten I only bought some snacks for Alex and I. Curious about the jets that had flown overhead I stopped a man in a Singaporean airforce uniform and asked him about them. He told me they were F-16s. Unfortunately, we just missed some others taking off, but when we went to the observation area we could see one F-16 parked and a number of Singaporean Chinook helicopters taxing and taking off. 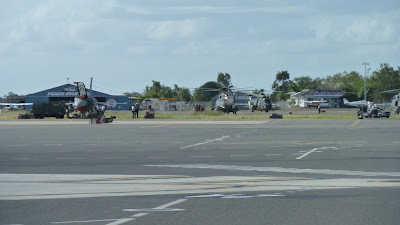 Alex was fascinated by the X-ray belt, but proved a real handful in the waiting lounge. Unfortunately, I had been given a bag of gifts to carry-on, which made holding on to Alex that much more difficult.

Eventually our QantasLink Q400 turboprop pulled up outside the gate and disgorged its passengers. We were then allowed on to the tarmac to board, walking up the built-in stairs at the door. 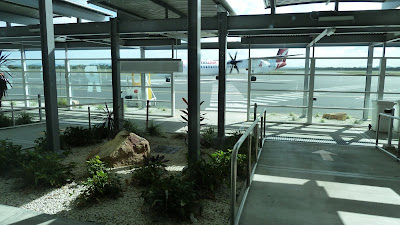 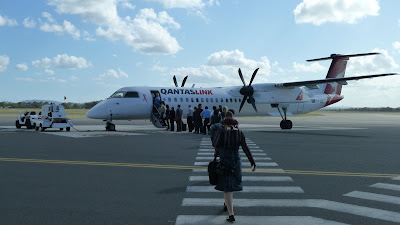 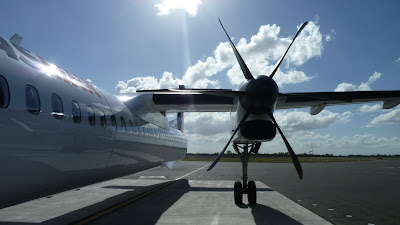 This wasn't Alex's first flight on a turboprop aircraft. Last year we flew in a FireFly ATR72-500 between Kuantan and Singapore. I have to say that I thought that the ATR72 was the better aircraft. The Q400's seats were small in comparison and the window seats are uncomfortably inflicted by the fuselage curvature, leading to greatly reduced foot space. 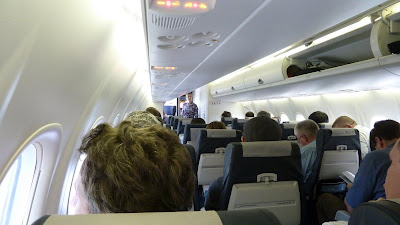 Normally I would pick a jet over a turboprop anytime. But over the years I have flown quite a few turboprops in Queensland and there's something romantic about cruising over the landscape at a slower speed and lower altitude.

Despite the noise suppression technology of the aircraft, the sound of the propeller starting up was rather loud from my position behind the engine. We quickly lifted off the tarmac and up past the Rockhampton Golf Course and Botanic Gardens where we had spent the day. The land was green and damp from recent rains, though I have seen it in a flooded state where the plains were submerged by brown water. 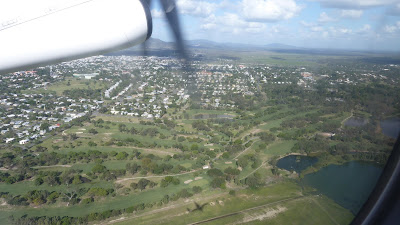 As we ascended the aircraft shook with turbulence and I reconsidered the wisdom of turboprop flight, especially as my feet were so uncomfortable. Alex didn't care: he quickly fell asleep, exhausted by the day's exertions. 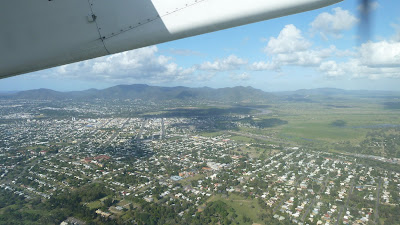 After rising above the scattered cloud layer the flight eventually smoothed out and I began to enjoy the view. In times past I had dreamed of escaping south across that countryside by foot; had driven across it; gone by train; flown over it. Whilst I was never comfortable with that landscape and had never felt a part of it, it still formed part of my history. 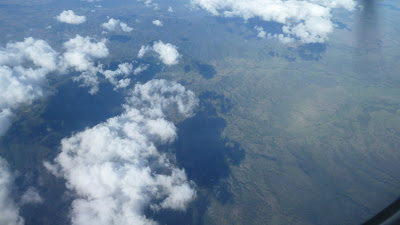 We were welcomed to the flight by the captain over the PA. He warned us that we may be placed into a holding pattern near Brisbane as weather issues meant that only one runway was in operation. Sounded ominous to me. 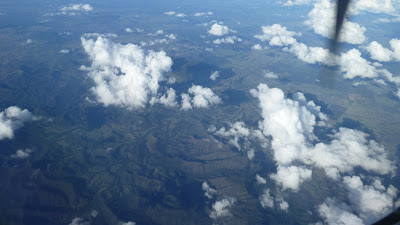 The flight attendants came through the cabin handing out cupcakes iced pink in support of breast cancer research and tubs of chilled water to drink, then offered drinks from the cart. Naughty me didn't keep the cake to share with Alex. When he woke up he requested food, but I only had muesli bars to give him. 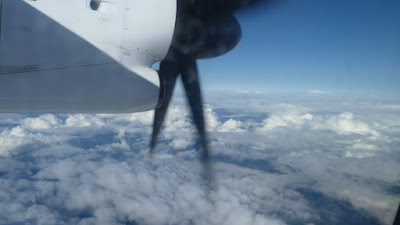 The clouds thickened as we descended into Brisbane, bumping us along. We made a long slow circle around the city centre, giving us views of the CBD, the Brisbane River and the bridges across it. Then the gear was lowered and we shakily landed on the soggy tarmac. 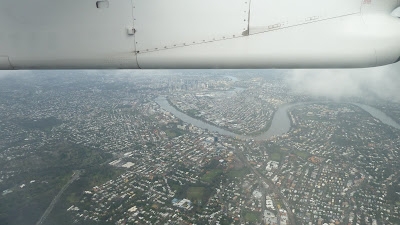 We were now running quite close to the departure time for our next flight. I wasn't too concerned that they'd leave without us as I was booked all the way through and this was Qantas, but I still wanted to make haste.

Making haste was difficult. We parked at a remote stand amongst other QantasLink turboprops and were driven, by minibus a few hundred metres to the terminal entrance. In order to reach the departure area we had to go back through security. The queues were very long, it was hot and humid, and Alex wouldn't cooperate by sticking close to me. I had no hands free as I had my laptop out in a tray in addition to the shopping bag of presents. Alex kept running off in front of me. 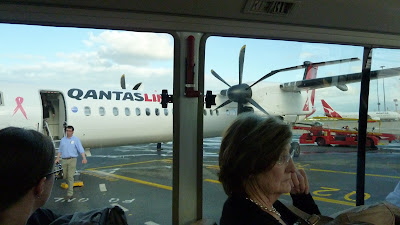 Somehow we made it through security, though by this time I was mentally swearing at the stupid airport. Upon later reflection I realised that, in Sydney, we would have had to change terminals to switch between QantasLink and their parent.

So much for grabbing some dinner or snacks in Brisbane. By the time we had gone upstairs there was a queue in front of the departure gate. As we waited in line in front of a newsagent Alex played with the diecaste helicopters and aircraft on the shelf. 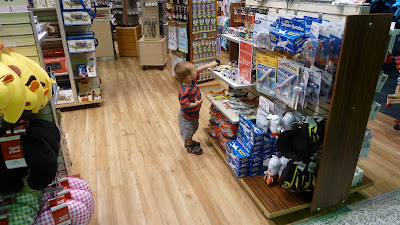 Soon we were seated inside the venerable Qantas Boeing 767. This aircraft looked a little newer than our last 767, the one we flew up from Melbourne on almost four days before. There were LCD screens rather than the centre projector. 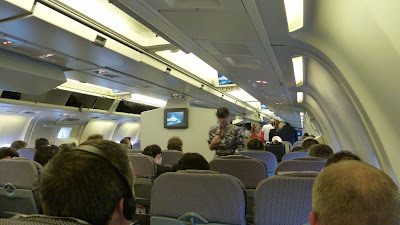 The sun was setting as we began our final flight. Eight flights in eight days. 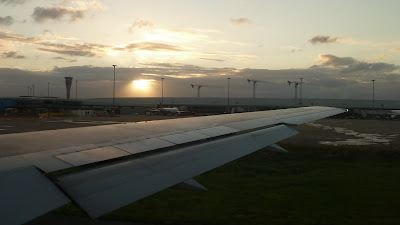 I really enjoyed this flight. There really is something special about these older Boeing aircraft. Maybe their yellowed plastic and old lines contributes to that feeling of romantic adventure. As we soared up over the Port of Brisbane and up high above the grey cloud layer with gold on the horizon I could almost convince myself that our holiday was just beginning and that we were flying on some long journey to another land. 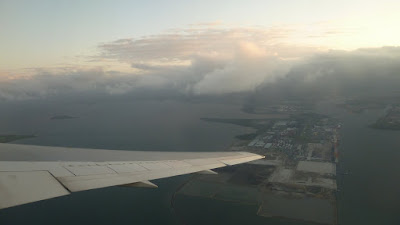 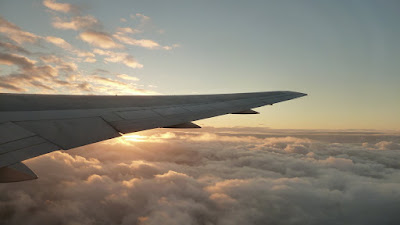 Alex didn't sleep at all on this flight, but was a lot of fun. I amused him with the camera, taking photos of him "Alex!" and letting him press the buttons. He played with my face, his long nails causing scratches that were later mistaken for a rash by one of my colleagues. 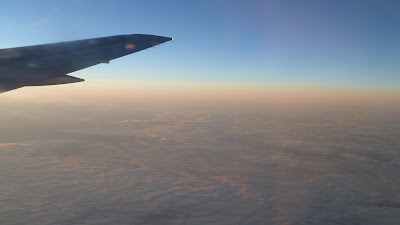 "Cheese?" "Bikkies?" Alex was hungry and he still wanted the snack from our first Virgin Blue snack. I explained that you can't buy food aboard Qantas aircraft. The crew came through with refreshments: a packed of Byron Bay cheese "crisps" and drinks. When I saw an apple on the cart I offered to swap one packet for a fruit, but they just gave it anyway. Alex refused the healthy option, which I ate, and kept quiet munching on the hard chips. 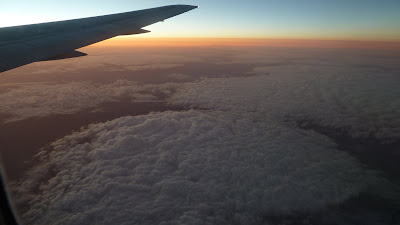 As the Sun turned into a vermilion ball in the west and quickly sank from view we began our descent into Sydney. Alex was getting restless, so I tried to point out the city lights below. We flew over the northern suburbs, then out east of Sydney Harbour. I had beautiful views of the Harbour Bridge and the city skyline lit up colourfully in the dusk light. Surely, this adventure wasn't ending? 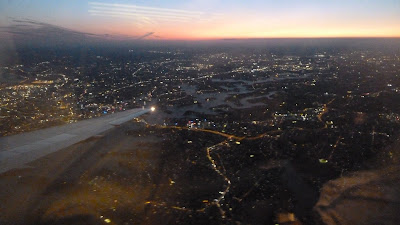 Then we swung back north over Botany Bay and landed in the dark. The adventure was over. But in recompense, it wasn't long until we met B in the car. Back home we drove with a healthy baby but a Mum who was now sick.

At home, now washed and almost ready to sleep, Alex wanted one thing to read. 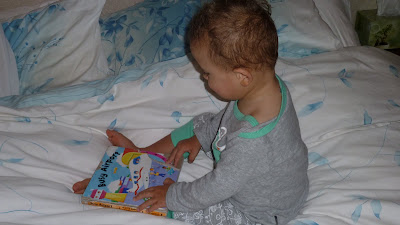