October 27, 2010
The first thing Alex asked for when he woke up was "cars". I immediately understood this to mean that he wanted to look through the hotel room window, where he was excited to see a rubbish truck in action. With a lack of daylight saving time difference of one hour (and 50 years) behind Sydney we were feeling more refreshed than the clock would indicate. 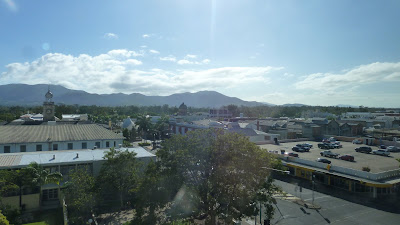 It looked like a nice day outside, so Alex and I went in search of breakfast and some bathroom essentials. The streets were fairly quiet this time of morning. There was a travel agent and a cafe surrounding the hotel, and naturally a pub, but not much else. Diagonally opposite the hotel the cinemas had been turned into a church. 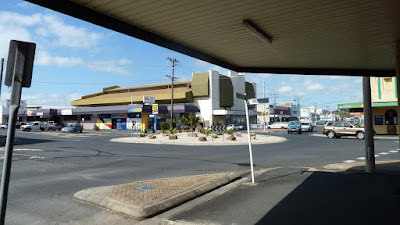 We walked to the City Centre Plaza, which contains Rocky's poshest department store: Target. After buying Alex and I supplies at the Coles supermarket we sat down for a breakfast of eggs benedict at a cafe. Never had them before and looking at all the morbidly obese people around me I almost regretted ordering it. Alex was more interested in trying out the sprig of parsley on top. Back at the hotel I attempted to use a razor blade for the first time in years: I normally use an electric shaver. Then we packed up and met Mum down in the lobby. She drove us back to the Plaza, before taking us over the bridge to the place where my sister stays. 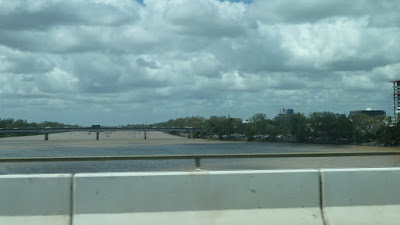 My latest nephew was even smaller than Alex at the same age, even though Alex was born three weeks early. I had suggested spending the day at what I think is Rockhampton's nicest spot - the Botanic Gardens. 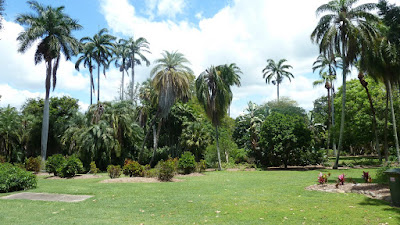 We arrived to the sound of fighter jets roaring across the sky. We guessed that it was the Singaporean airforce on exercise, amusing as I had just been in that country and seen fighter jets fly overhead there as well.

The air was pleasantly warm without the extreme heat and humidity of Singapore (though Rocky can get just as unpleasant). Alex enjoyed himself playing on the many structures in the playground, while my sister and fiancée bought food for themselves and my Mum looked after their child. 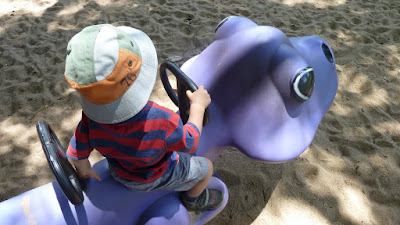 We then headed off to the Japanese Gardens. Sadly these were like packet sushi, capturing very little of the essence of the real thing. You might say that I've been spoiled by visiting some of the very best gardens in Japan, but I can usually take as much pleasure in simpler versions. However, Rockhampton's Japanese gardens just felt wrong.

It didn't help that the centrepiece stone lantern had gone missing or that there were no goldfish in the pond. The waterfall was too loud and the stones weren't right either. It's a pity because my memories of the place were far nicer. 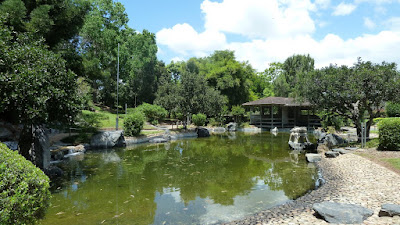 At least Alex enjoyed himself, excited by the waterfall. 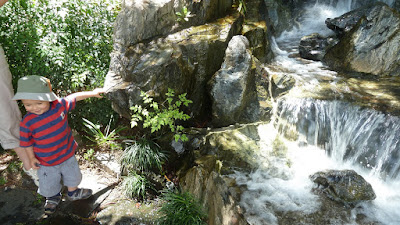 The rest of us went for lunch at the kiosk. I tried to feed Alex a sandwich, but he was too interested first in Nanna's meal and second by the rainbow lorikeets that flew down to the table and the ibis that hung around. 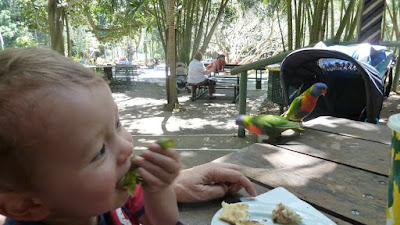 He had the opportunity to view a few more animals when we walked down to the zoo section of the gardens. Rockhampton's zoo is a bit more old fashioned than places like Taronga when it comes to cages, and has far fewer species on display, but it's free and accessible so I'm not complaining.

We saw a dingo, some birds, a macaque and one of the chimpanzees before we had to return to the car with time running out. 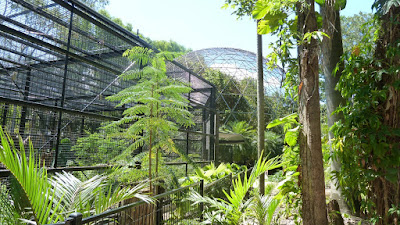 We returned the baby back to my sister's residence and met the baby's other grandma. The people of Rockhampton often look like they've lived tough lives, quite difference in appearance for Sydneysiders. Alex happily played in the very nice home made cubbyhouse at the back before it was time to leave for the airport.