The old queen of the skies

June 15, 2009
The A380 may have stolen the Queen of the Skies title from Boeing's 747, but the venerable old aircraft retains the charm of an old world cruise liner compared to the clean modernity of the new titleholder. I was looking forward to catching a 747 again as I have had a great many adventures on them, including my very first overseas flight.

Boarding was a quick and painless affair. I was in the group after the young families and special needs passengers to board. The first thing I noted was how dated the interior looked in contrast with the A380, despite the fresh red fabric of the seats. I sat down on the same kind of seat that had taken me across Asia with Jetstar in more recent times, though this was fabric rather than leather. Definitely not as comfortable as the A380's award winning seat and certainly not as strokable without the gorgeous carbon fibre shell. 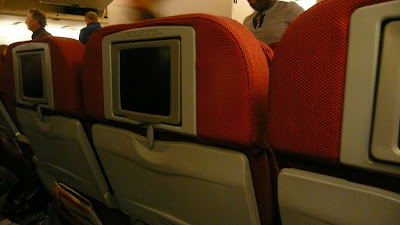 The seatback non-touch screen was small on squarish in contrast with that of its younger cousin's. It was still AV on demand and had one important advantage over the A380 - this time the Little Britain USA episodes were loaded! In fact, I managed to watch the entire series on this flight, which was a welcome distraction. The entertainment system needed a reboot in the middle of the flight, but fortunately the system had a fast forward facility. 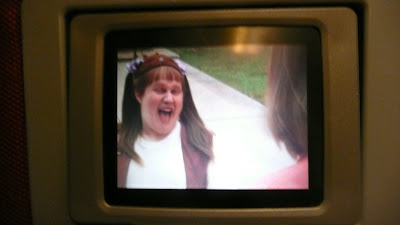 Tom Baker, who humorously narrates Little Britain, also did the voiceover work for Qantas' inflight shopping advertisements, signing them off with a "Buy buy"! Obviously there are some LB fans associated with the airline - is that why they tried to merge with British Airways?

Extremely tired, I wrapped myself in a blanket and tried to make myself comfortable as we taxied out to the runway. Our takeoff was more forceful than in the A380, and the aircraft felt like it had more power throughout the flight.

For much of the flight from Singapore to about halfway across the Bay of Bengal the flight was a bit rough, as if we were driving across a bumpy road. We must have had the wind at our back because the captain announced that we were expecting to land up to an hour ahead of schedule.

I coped with the turbulence on this flight. There weren't too many "drops", which is what I really hate. The Bay of Bengal certainly wasn't as bad as I had expected.

At one point we skimmed through the tops of a high cloud bank and the aircraft's 900 km/h speed was never more apparent. That was an amazing sight, with the cloud tops illuminated by the light of the Moon.

Our route took us up along the coast of Malaysia, across the Bay of Bengal, over India and Pakistan, across southern Afghanistan, Iran, the across the Caspian Sea, the Ukraine and into Poland. India was full of light, in contrast with dark Afghanistan, where a single light from the ground became noteworthy. Cities were glittering jewels, sparkling snowflakes beneath us. Sometimes I though I recognised mountain ranges by they white snowlines. In the north of Pakistan, a line of storms flashing in the distance. 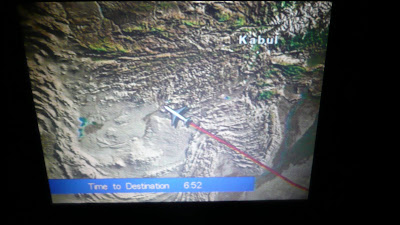 A couple of hours after take-off we were given a supper. I chose the Jalfrezi (sweet and sour) fish with rice and spiced pineapple, the flavour overwhelming my tired tastebuds, a so-so cucumber and bean salad and yam and sago pudding which contained palm sugar syrup - gula malacca. I just skimmed the top of it. I almost missed the meal due to sleep and must have missed the hot chocolate service later. Later we were handed snack bags containing water, an apple, Oreo biscuits, a Toblerone chocolate and Menthos sweets. Not very Australian! 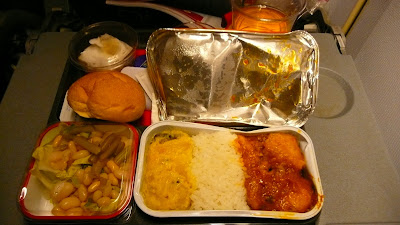 I also accepted a fresh banana, which was handed out in the wee hours, and had a hot breakfast of omelette, bacon, sausage and tomato ragout, raisin danish, fruit salad and orange juice.

It's funny, but every time they served us a mealthe aircraft would strike some turbulence. But the seatbelt signs were never once illuminated. I like that!

Dawn came while we flew over the Ukraine. Beneath us was broken cloud - I sometimes mistook the shiny low clouds for lakes. We barely outran the dawn as we crossed Europe, Poland, over Berlin in Germany, until at last Rotterdam was beneath us and we were about to cross the English Channel. Our engines were generating contrail clouds. At one stage I saw another aircraft in the distance, the shadowed contrails looking like huge clouds of dirty smoke flowing out of the rear engine, a steam train in the sky. 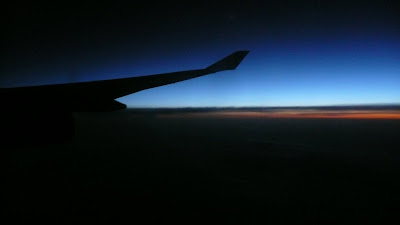 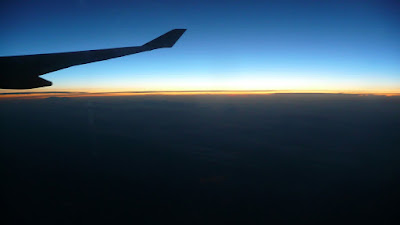 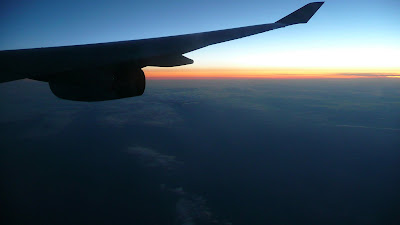 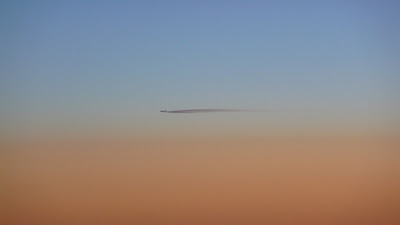 The clouds broke once we hit the ocean and we began our descent across England. We followed the Thames and I had the most magnificent dawn views of London out of my window. The Millenium Dome, Tower Bridge, London skyline, Hyde Park, Earls Court, the twisting rows of houses, all bathed in orange gold light. The cabin crew manager described the sights over the PA. 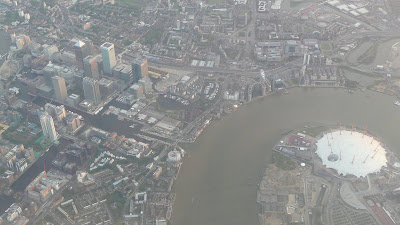 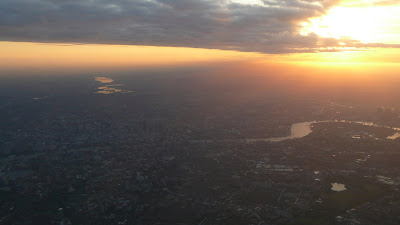 We finally touched down into a quiet Heathrow airport. We must have been amongst the first to arrive as the place seemed deserted. There were, of course for Britain, still queues to pass through immigration, but at least our baggage was waiting for us. 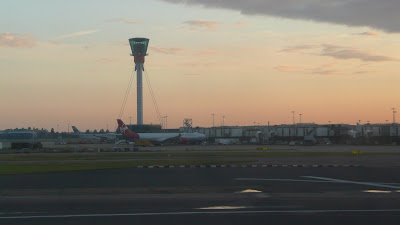 Likewise, Terminal 1's Tube station was also devoid of staff. The ticket machines refused to take notes and notes was all that I, and most of the other passengers had. It was like being back in Sydney and very stupid for an international airport. Fortunately they had a credit/debit card facility in a few of the machines, so I used a Travelex Visa card in one to purchase a four pound ticket to Earls Court. 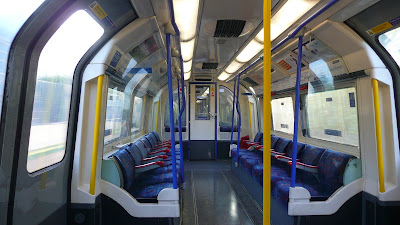 The train itself only went as far as Acton Town, where I had to change trains. I used to think that B was my lucky charm when it came to sunshine in Britain, but now I know that the Sun shines out of my gaseous arse. The train spent some of the time above ground and it was a beautiful day outside. The countryside looked fresh and green, with colourful flowers everywhere. While I stood on the platform at Acton Town I could hear loud birdsong. 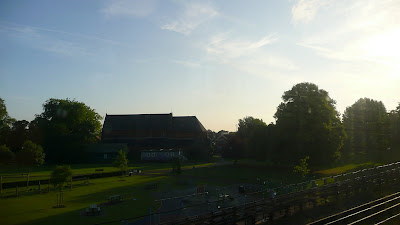 We arrived at Earls Court and I soon found my hotel nearby. Now all I had to do was wait for my room. 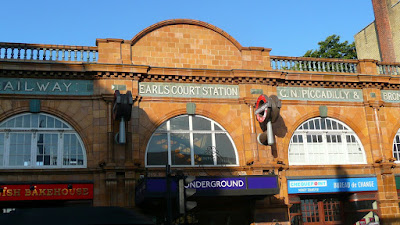 After the prelude of fear, exhaustion and sadness, I really enjoyed my flight to London. The 747 wasn't as comfortable as the A380, wasn't as new, but it was superior in at least one way: its windows. They seemed larger than the A380, certainly squarer, and their design meant that there was less reflected internal light, making viewing at night superior.

The 747 is still a queen of the skies in my book. I'm not dreading the return journey quite so much now.