September 30, 2007
It's been quite a few years since we last visited Floriade. When I lived and studied in Canberra the tulip festival marked the end of the dreary colourless winter and the beginning of the far more pleasant spring (albeit one with the hazard of the swooping magpie).

The effect is lessened by living in largely seasonless Sydney but I'll take any excuse to visit one of my favourite cities. It is only a two and a half our drive from our house and dual carriageway the whole route.

We have travelled this route countless times, but there are always differences to spot in the landscape. As a whole, the fields were quite green, although the poplars lining the start of the Federal Highway were still empty of leaf, despite the looming arrival of the second month of spring. And Lake George was still an empty expanse of green pasture, though I thought I could see some water in the distance. I love that stretch of the highway, steep hills on the right and the mysterious lake on the left. I can imagine it s the backdrop to a fantasy movie.

It is always exciting to cross that last hill and see Canberra before you, the Black Mountain Tower against the backdrop of the Brindabellas.

The fields of flowers at Floriade were as beautiful as ever. Rather than attempt to describe it I will let the pictures speak for themselves. 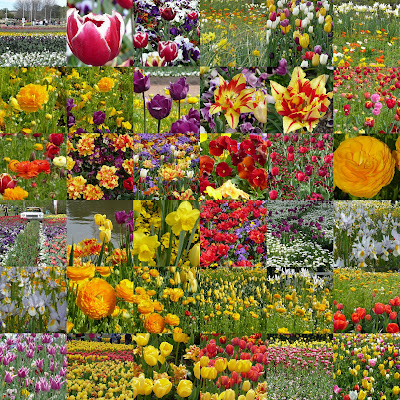 A lot of people complain that Canberra is a dead city. I guess they miss the crowds. The new developments with the Canberra Centre in Civic look great, but the area was quiet on the Saturday afternoon, the shops uncrowded and the offices unoccupied. I like the peace and quiet as it leaves much more room for the imagination than do bustling crowded places.

Inspired by the flowers we stopped by some nurseries at Pialligo, near Canberra's airport. Canberra's centralisation of services means that there's no need to drive around the whole city searching for shops as they tend to cluster in distinct areas based upon the type of service. We didn't purchase any flowers, but we buy a bonsai starter pack... See, we are still under the influence of Japan!

It was late in the afternoon when we began our drive home. We both agreed that this was our favourite time for travel, when the light has a golden hue and the shadows are long. It reminded me of journeys past and made me wish this was just the beginning. I would have liked to pull into a roadside motel outside a small town, to eat a dinner in the local diner or Chinese restaurant that all such towns seem to have.

But our dog awaited us at home and there are few such towns now between Canberra and Sydney. We did stop by one of the service centres for snacks and laughingly observe a Queensland van drive the wrong way down the road and try to park by driving over a low concrete barrier.

As we entered greater Sydney we found ourself in the wrong lane and were forced up the Heathcote Road turn-off. It still lead back to our house but now in a single lane and around the southern outskirts of Sydney in the dark.

It was nice to get out of the house on the long weekend and I think that the car enjoyed a drive of a decent length. It's probably not the last time we will visit Canberra this year.