April 14, 2006
Today we said goodbye to Osaka and packed our bags for Takayama. 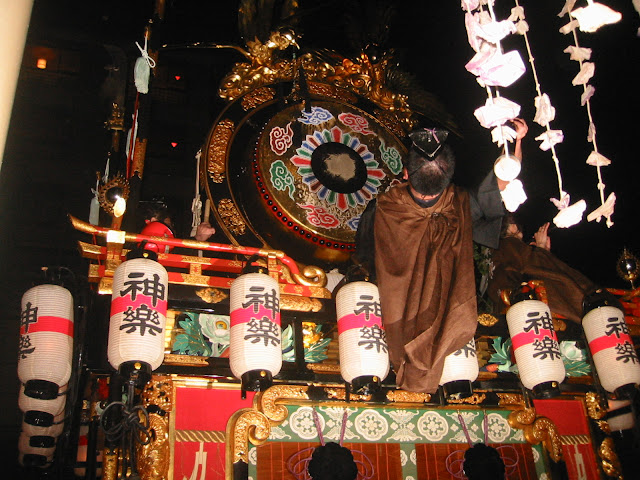 First we caught the Shinkansen to Nagoya. According to the JR office, the reserved sections from Nagoya to Takayama were fully booked. That's not surprising as Takayama is hosting one of Japan's largest festivals for these two days.

It was my hope that the Takayama tourist office could help us book some accommodation nearby; I had no hope for anything at Takayama itself. We would take our chances with unreserved seating on the trains.

With some time to kill we decided to see a bit off Nagoya. The station area is heavily developed with integrated department stores. Hungry for lunch we found in one of the department store's restaurant levels a place devoted to kishimen noodles, the flat noodles that are a speciality of Nagoya.

Thinking that we should try to see something of Nagoya we took the subway to Osu Kannon, a relatively new reconstructed shrine surround by arcades selling leather goods, t-shirts, fabrics and knick-knacks. We bought some fabric for my Mum and a wall hanging for us. Then back to Nagoya station. The unreserved section of the Takayama train was surprisingly empty and we had our choice of seats.

The train initially ran backwards to Gifu, then set off forward following the river up into the mountains. It was a journey that compared with our trips through the Swiss and Austrian Alps and New Zealand. Swift blue water carving its way through jagged grey rocks, deep within a mountain valley. Houses, tea and rice plantations somehow existing on the narrow edges. Flood barriers, weirs, tunnels into the mountains, red bridges stretching between the valley walls. Winter trees without foliage contrasting with cherry blossoms in the lower regions. Traces of snow. Had there been nowhere to stay at Takayama and we had to turn back the journey would have been worth it. 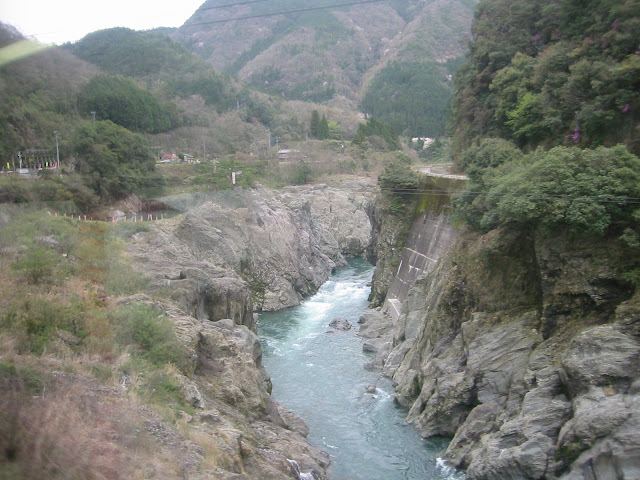 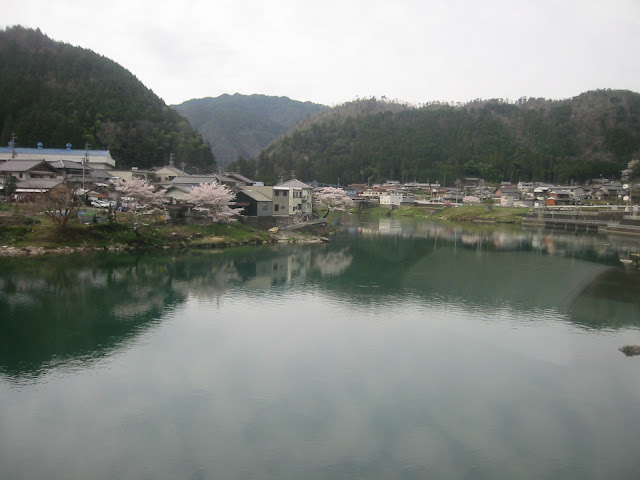 Fortunately the accommodation office found us a hotel room in Takayama itself, not the ryokan I had hoped for but a full hotel.

We unpacked, the it was straight off to watch the procession of floats. The street lights were dimmed along the route and replaced with candlelit lanterns. The sound of drums and flutes preceded the great wooden floats as they were dragged along the route by teams of me. Children sat in the upper reaches and the floats were lit by their own lanterns. 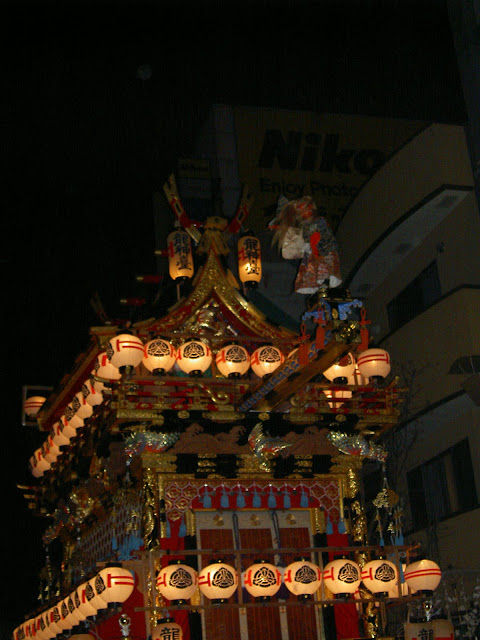 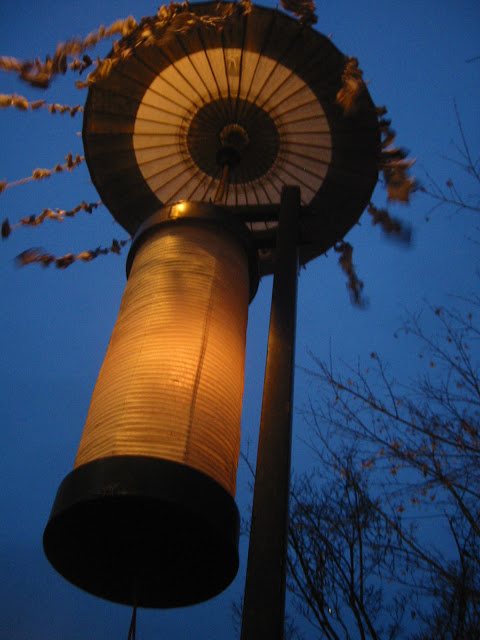 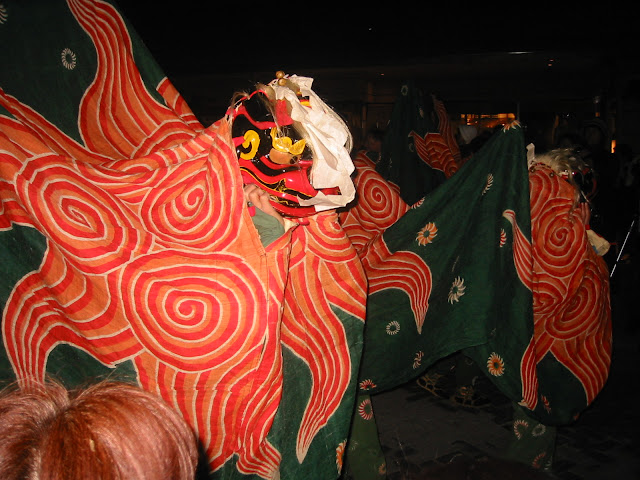 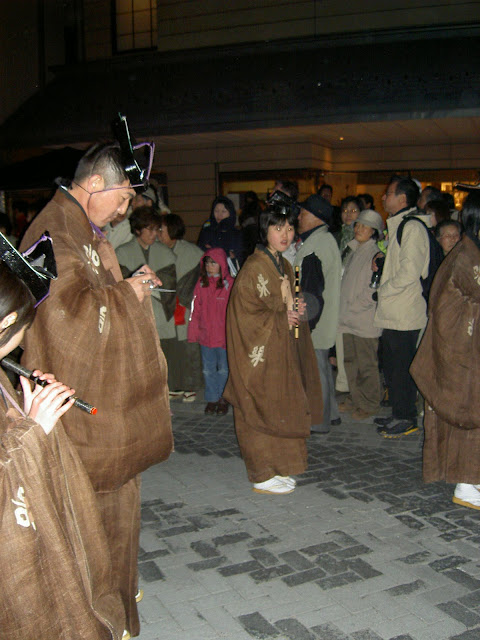 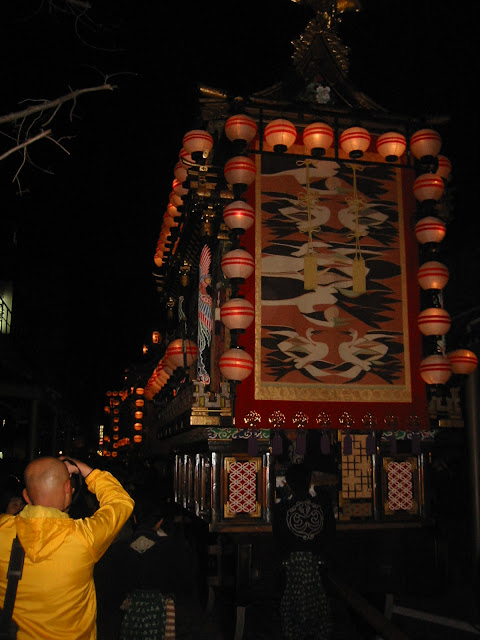 We wandered the lit streets past the old buildings, ate mitarishi-dango (grilled rice balls coated with soya sauce) and skewers of the juicy local beef. B spotted a beautiful golden retriever and asked the owner its name. He replied, then asked he waitress of the adjacent bar to bring out a glass of whiskey. Politeness dictated that I take a sip, but thankfully he finished off the rest.

After much searching we found a restaurant and ordered a serving of grilled hida beef (the couple opposite appeared to eat it, and some livers, raw), soba and tempura mountain vegetables. The strips of hida beef, cooked at our table, was divine, the cold soba good (but I've had better) and the mountain vegetables plus the little side dishes, mostly disgusting. At least we tried them! 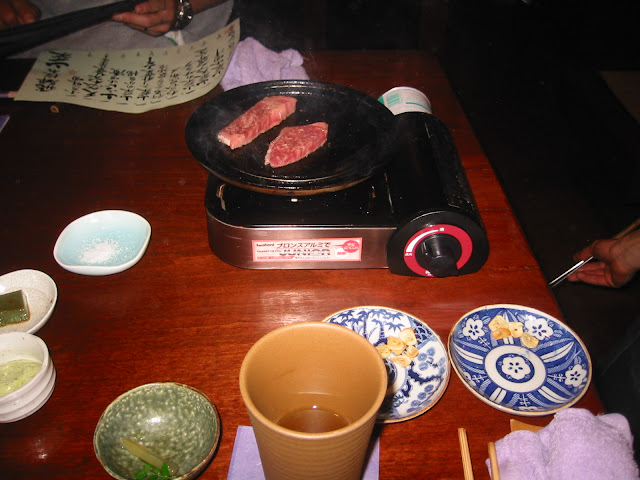 I thought that the bill was almost $800, thanks to the use of Japanese characters. Fortunately it was about a tenth of that. Worth it for the beef.