A selection of jams

We're home now. The last two days of our Brisbane trip involved a lot of driving but not always much movement.

On Wednesday we arranged to met Sis and her family at Robina Town Centre, a massive shopping mall. That meant a drive down towards the Gold Coast along the same motorway we'd driven up along.

What should have taken an hour took twice that due to the holiday traffic along the 3 and 4 lane road. Lots of people taking the turn-offs to three of the "Worlds" (Wet'n'Wild, Movie World and Dreamworld).

The Town Centre hosts Artvo, a trick photography gallery where you use perspectives to make subjects look like they are part of the artwork. It was surprisingly fun, despite the aversion of we males to being the subjects of photos. 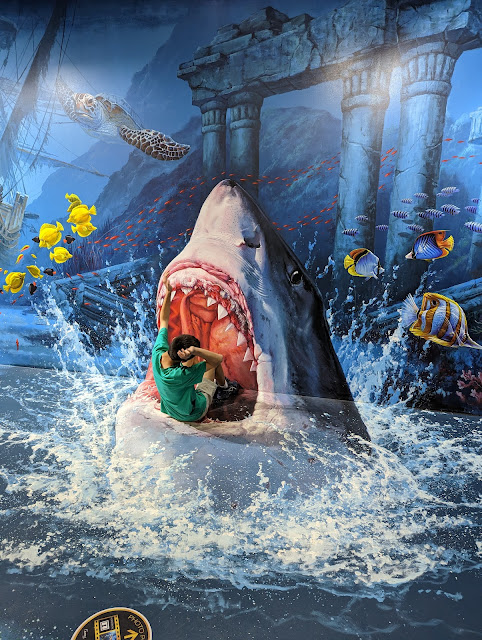 Afterwards we had a long chat over lunch, which was sourced from a variety of eateries. I had roti and chicken curry from Roti and Buns. Passable, though the curry was more laksa like.

We later took Sis to Daiso and she and her husband tried Grapefruit Gokuri. Neither of them appreciated it like me.

By the time we said our farewells we were exhausted and glad to be done with family for another year.

Thankfully, the drive back to our hotel in the city was much faster and jam free.

Dinner was a hotpot and tteokbokki at Maru, a very popular Korean restaurant in the city. 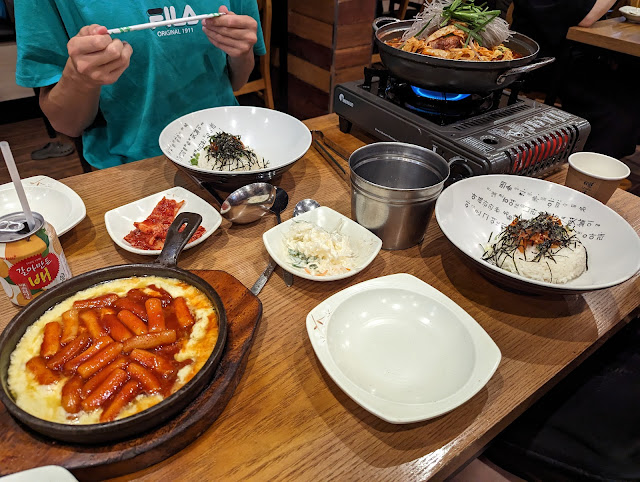 We departed the hotel at a quarter to eight in the morning, an achievement considering the night before. Back again down the motor, fortunately a lot quieter than the previous day.

After three and a half hours driving we stopped at Halfway Creek for petrol and a lunch of meaty hamburgers.

At Coffs Harbour we hit our first traffic jam, leaving and rejoining the highway around an alternative route that felt quite familiar from our previous stay in the city. Fortunately, it was only a short jam and we were soon on our way again. 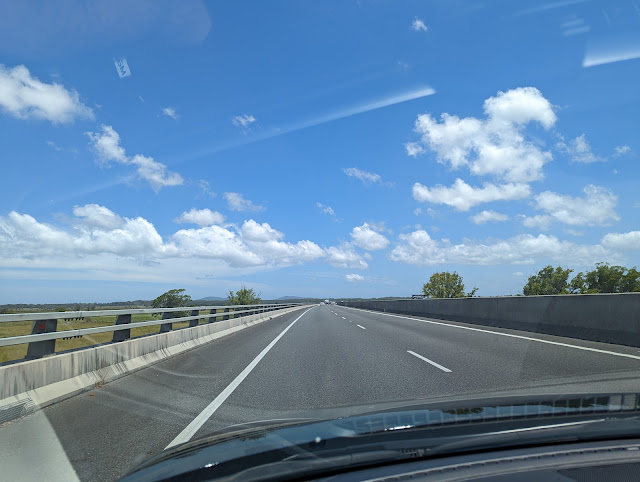 Three and a quarter hours of driving and we made another bathroom stop and driver change at Coolongolook. I already felt the stirrings of a migraine and took some paracetamol before getting behind the wheel.

Traffic built up the further south we got. We made it through Hexham and on to the Pacific Motorway without too much drama. It's not a fun drive, with aggressive utes and luxury cars tailgating in the right lane, trucks in the left and vacillating Volkswagens in the middle.

From around Mount White the traffic came to a crawl due to a truck fire earlier near Cowes. It was stop start and when we did move it was usually at less than two hours. We should have taken the turnoff at Mooney Mooney bridge to get on to the Old Pacific Highway, but I'm not very familiar with the area.

By now my migraine had exploded and Alex's bladder was about to. I just wanted to close my eyes and sleep, but we were trapped in the traffic. Eventually, B spotted a some open ground to the left of the highway and we pulled off.

While Alex used the cover of grass, I tried to puke my guts out. B took over driving duties and I shut my eyes. But even that wasn't enough. Each headlight and streetlight was a painful stab through my eyelids. Finally, after two hours, we passed the accident site and the traffic opened up again. It was now dark outside and B was unfamiliar with driving this section of the road. Fortunately, all you have to do is keep left to enter the Northconnex tunnel. The GPS and Alex helped.

We made it home 2 hours late, or around 13 hours since our departure from Brisbane. We had had no dinner and were too exhausted to go out and buy some from the few restaurants still open, so it was just two-minute noodles for the other two.

It was so good to be home, but if I had known of the pain ahead I would have tried harder to book some accommodation along the way. Unfortunately, it is peak holiday season and the coastal towns were almost all fully booked.

I think we are done for both family and driving north for now.