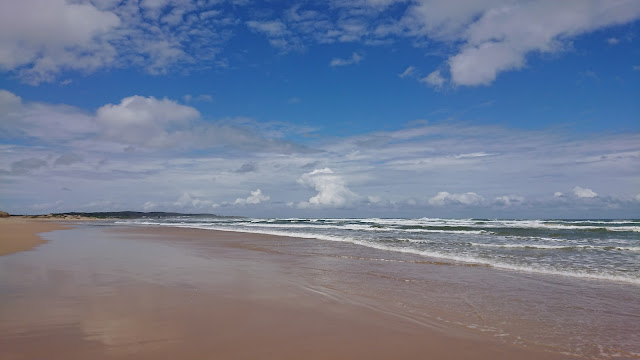 A relative's wedding right in the middle of the spring school holidays ruined our chances for a decent break away. This was especially disappointing after being stuck at home with covid last holidays. All we could manage was three nights up at Nelson Bay to escape from a house that is also the office.

I am not a fan of the drive north out of Sydney to Newcastle. Too many lane changing, tailgating idiots with massive utes or luxury cars and a route that demands that you are in the correct lane without sufficient warning. So it was this time.

The Monday night wedding left us exhausted and we departed quite late in the day. We made it to the Morriset turnoff for a lunch of KFC, then through to the nightmare of Hexam, before turning off at Tomago, thus breaking with our last few drives north.

The traffic in the opposite direction was horrendous, jams stretching for kilometres. I had already planned to take a different route home.

I was very glad to finally reach our accommodation, the Oaks Lure. Our split level apartment was very nice, apart from the inability of the smart televisions to connect to the internet except by phone hotspotting. Streaming services are virtually a necessity these days. Anyway, the ability to use our NSW Parents Vouchers made it somewhat affordable. 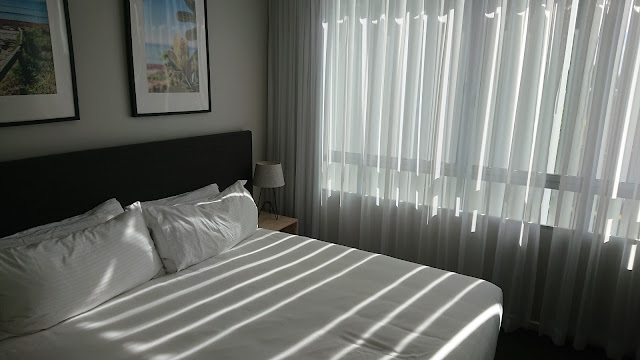 After a brief rest, we walked down the hill and into the centre of Nelson Bay township. Many of the shops had closed for the day and we continued on to the marina. Fortunately the well-stocked ice cream shop was still busy. Walking further along I bought flathead fillets from a fishmonger, already clearing his stock for the day, for dinner. Returning up the hill we stopped at Woolies for the remaining ingredients, having not brought enough from home. 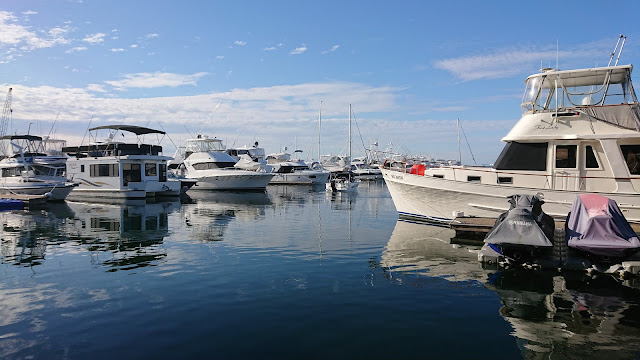 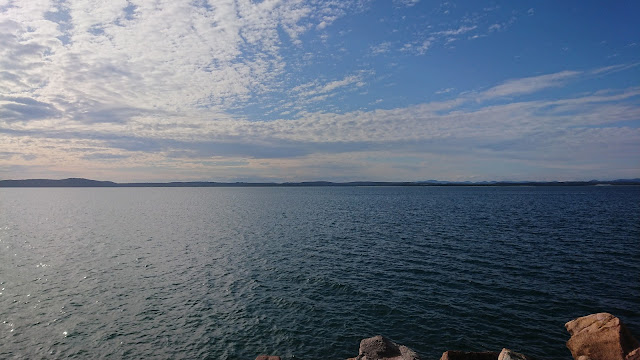 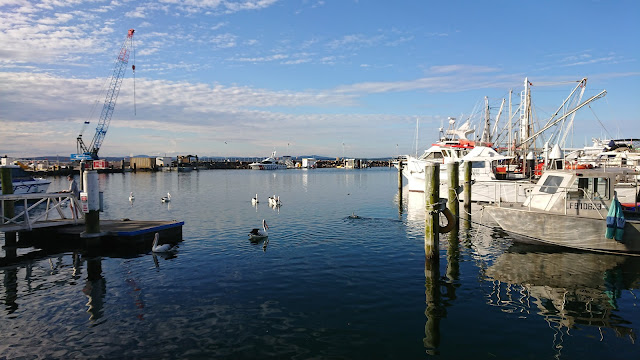 We all had a late afternoon nap, then I cooked the flathead and vegetables in a sweet chilli and coconut sauce with packs of microwave rice. We really should have brought our rice cooker from home. I was pleased with the result, despite the lack of the usual range of sauces. 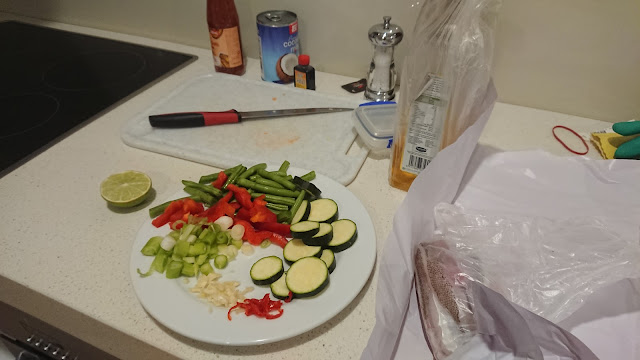 Wednesday saw us at Toboggan Hill Park along with a crowd of other visitors. After queuing for maybe half an hour or more, B and Alex finally got one ride in before the rain struck and we abandoned hope of doing anything more. 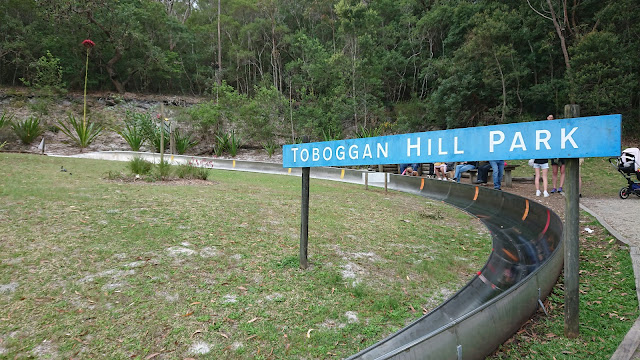 The showers seemed quite localised, with only light showers as we returned to the marina and wharf for a lunch of fish, a seafood pack, fresh prawns and oysters at Bub's Famous Fish and Chips, which really did seem to live up to its reputation.

I bought some black snapper fillets from the adjacent fishmonger. Then we went on a bit of a drive, up to the Nelson Head lighthouse, with its interesting little museum and lookout. From there, it was up to Tomaree, Fingal Bay and the Barry Park lookout, before returning to Nelson Bay. 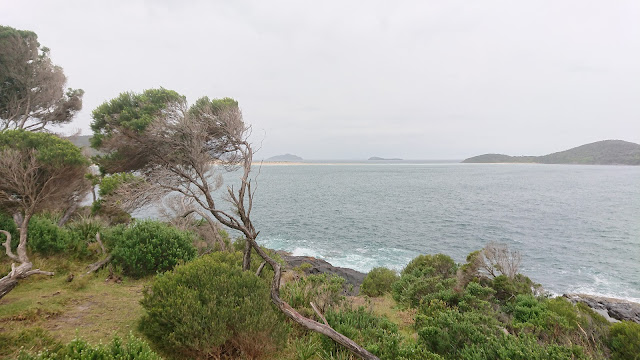 Another stop at Woolies for more supplies. What I really wanted was some decent sambal with prawn, but the closest I could find was laksa paste. For dinner I cooked the snapper in a coconut and curry leaf sauce, not quite as nice as the night before's.

About the only sight I was eager to see in the area was Fighter World, back at Newcastle Airport. The big hanger has static displays of a variety of ex-Australian airforce fighter aircraft, including an F-111, Mirage IIIC and a F/A-18A Hornet, along with a smaller shed containing Spitfires, a Vampire, Meteor and Sabre. The displays are very informative, especially about some of the component parts, like ejection seats, weapons, radars and engines. 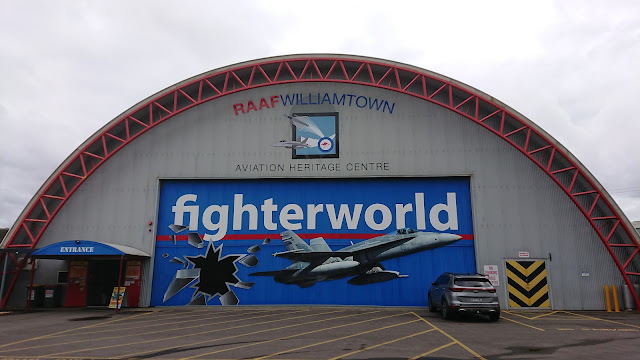 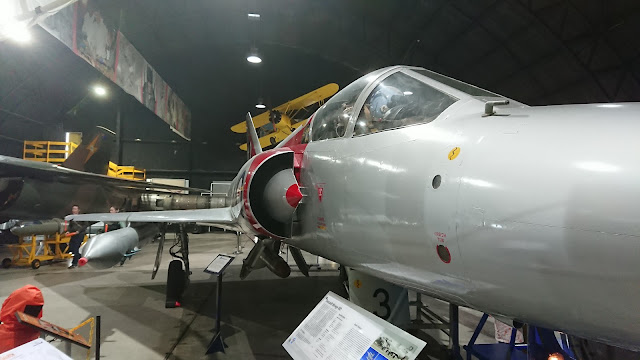 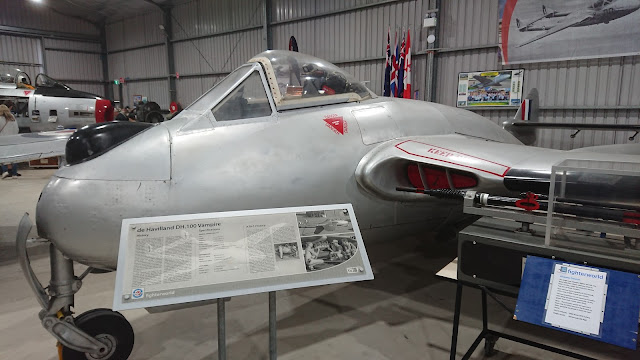 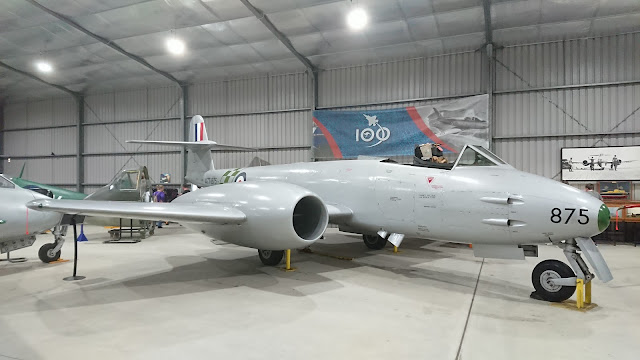 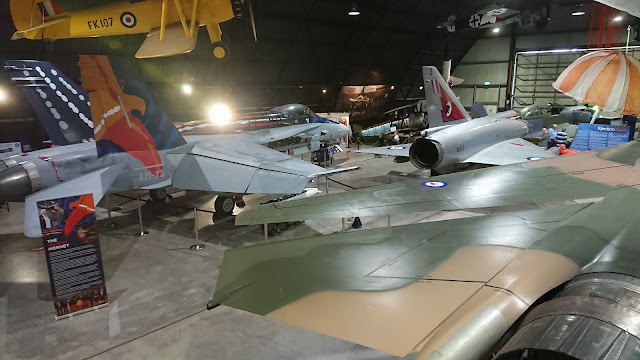 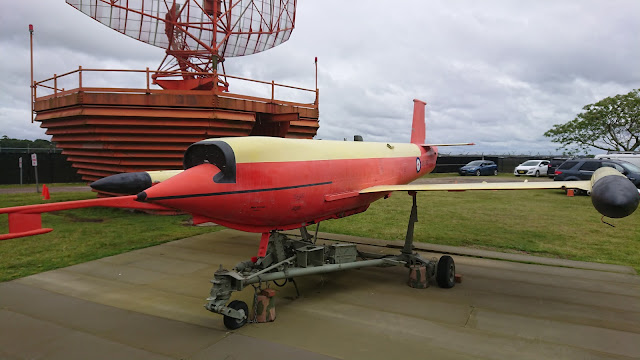 I was really hoping that the nearby RAAF base might have some of the new F35's flying, but all I saw from the observation deck was a Qantas Dash8 Q400 heading up to Brisbane.

The weather was holding up pretty well, so we decided to do the biggest attraction of the area, the dunes of the Worimi National Park, driving to Birubi Beach at Anna Bay. After a quick lunch, we joined a 4WD bus tour on to the beach and dunes.

The driver was a very good guide and gave an interesting commentary on the area. The heavy La Nina rains had raised the water table and pools of water could be seen, surround by the green of grass and algae. Other times you might have to dig a little to find the fresh water, filtered by the biggest moving sand dune system in the Southern Hemisphere. 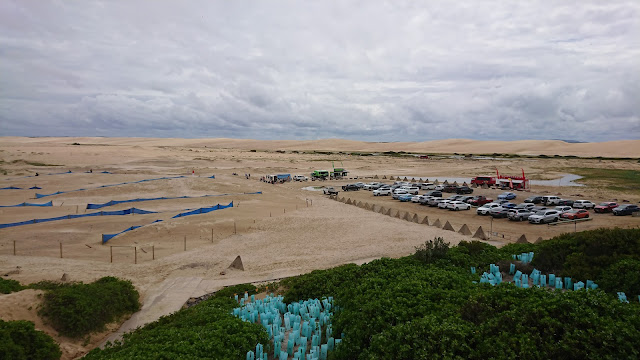 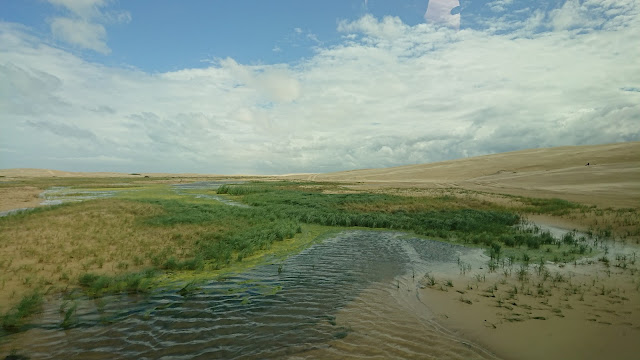 We stopped along the beach to search for pippies, wriggling our feet in the wet sand until the bivalve molluscs emerged and attempted to escape. They were mainly tiny juveniles. When you leave them, their strong "lips" emerge and pull them back down into the sand. 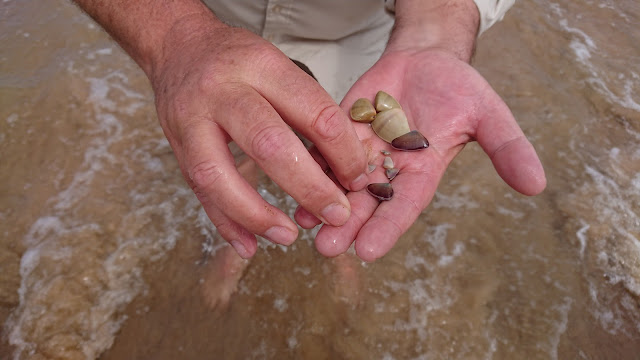 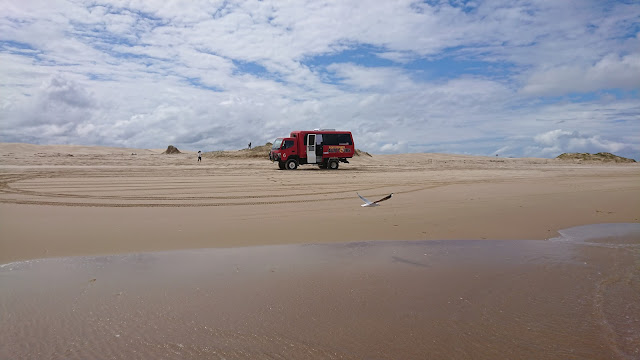 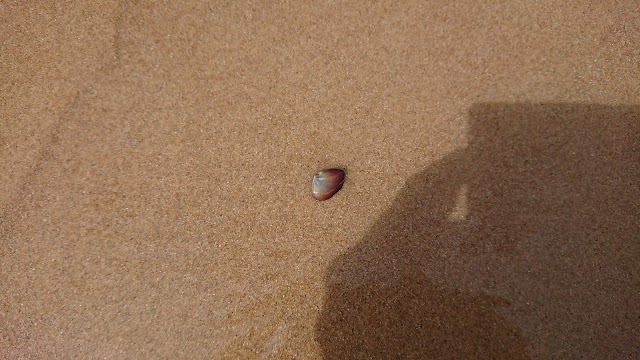 This was not my first time hunting for pippies on this beach, but you are no longer able to take them home to eat, which is fine by me because I don't eat molluscs anyway.

A RAAF Spartan transport flew very low overhead, on training runs along the beach. I later spotted the black speck of a F35 disappearing into the clouds in the distance. 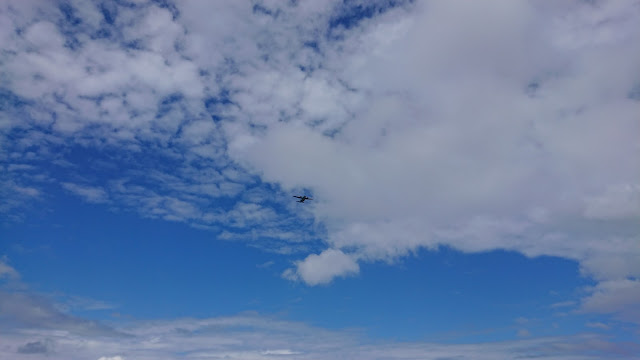 Returning to the bus, we then drove up into the dunes for sandboarding. B and Alex did the sandboarding while I videoed them. I've slid down the dunes on a board before, that's enough for me. 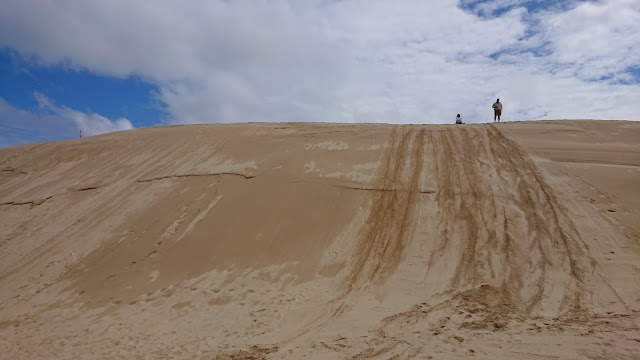 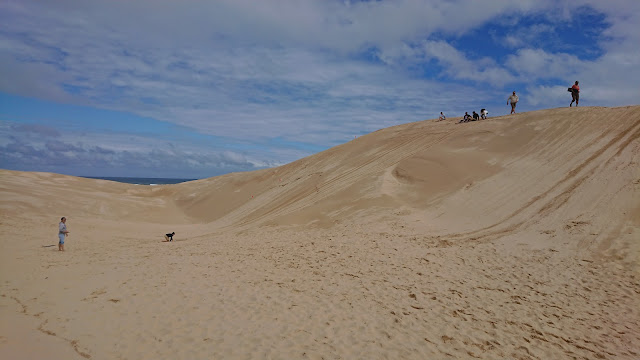 The bus returned us to Birubi Beach and we walked with sandy feet back to the car. Heading back to Nelson Bay, we turned off to Gan Gan Lookout, up a steep and winding road. At the top there were spectacular views across the Karuah River inlet and along the coast. We were fortunate indeed that the weather had cleared up for the day. 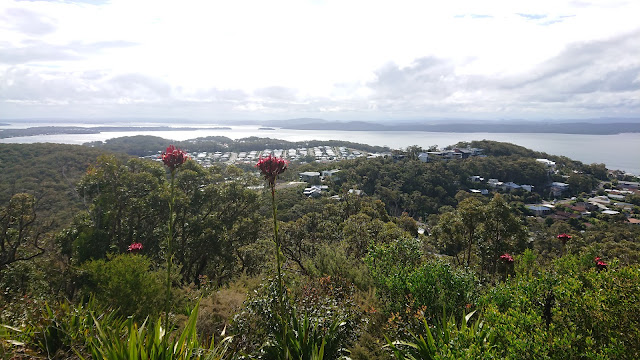 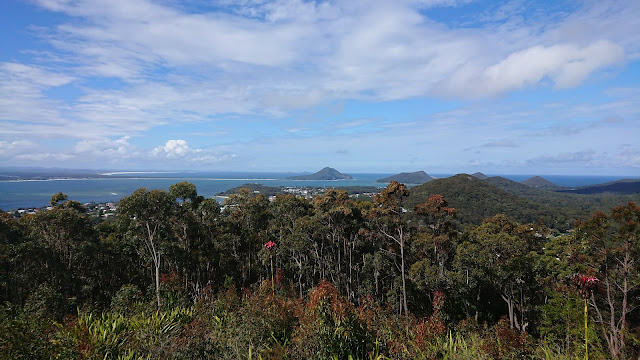 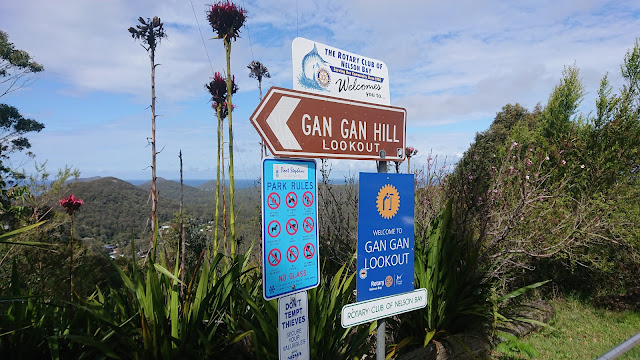 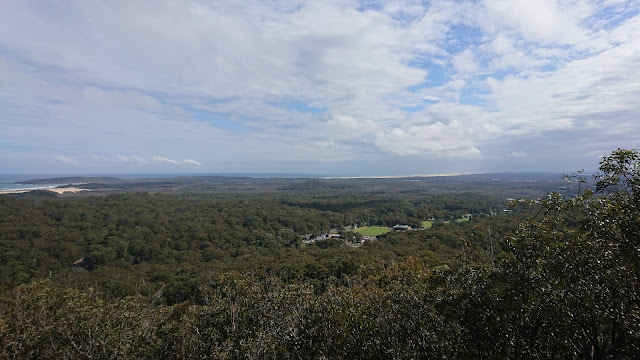 I dropped the others off at the apartment, the drove to Salamander Bay Square in search of petrol and more supplies, finding a K-mart and the major supermarkets.

Dinner was cold prawns and leftover snapper cooked in a cream sauce flavoured with stock made from the prawn heads and served, at Alex's request, with bowtie pasta (hence the need for additional supplies). I quite like being creative with the limited supplies. It's somehow easier than trying to decide what's for dinner at home.

Faced with the threat of heavy rains and heavy weekend/end-of-holiday traffic I wanted to leave early today. Rather than face the jams of Tomaree and Hexam, I decided to ignore the GPS and drive into Newcastle via the massive Stockton Bridge as I don't think I've ever gone that direction before.

The bridge was indeed impressive, as were all the port loading facilities we passed. Hopefully their time is limited as renewables replace coal.

I continued to avoid returning to the motorway by driving through suburban Newcastle towards Hamilton and Merewether and taking the route down through Belmont on the Pacific Highway. Eventually we returned to the M1, but I had missed a number of stretches of annoyance.

We passed a big jam in the opposite direction as we approached Mooney Mooney, whether it was because of an accident or holiday traffic I'm not certain.

The problem with driving between Sydney and Newcastle is that they are both large cities, which means a lot of idiots on the road, like the occupants of a green P plater van who were doing rapid lane changes and flipped us the finger as they stole gaps. There's probably a tree or lamp waiting for them in their future.

And there we were, back in Sydney, dealing again with all the crap.

It was a relief to get off the roads. It's a pity that I still have business back in Queensland (family, concerts - the QSO just realised their 2023 program!) because I'd be quite happy not to drive north again, at least not that stretch from Sydney to Newcastle.

I don't think I have any real desire to return to Nelson Bay. It's pretty, fish and chips were nice, but it lacks the atmosphere of some of the other coastal regions and I can do without the stress of the drive.