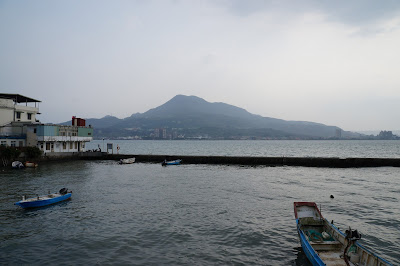 Both B and I agree. Taiwan is a place that we want to return to. On our last day in this island country the list of places we could visit was far too extensive. We could traverse the island on a high speed train or take another slow ride along a scenic route. The gold mining town of Jiufen is somewhere I've long wanted to visit, but means another train ride to Ruifang. Then there are many places accessible by the MRT.

After leaving our bags in the care of the CityInn II, a hotel which we would also be delighted to return to, we took a slightly different route to the station via the Museum of Contemporary Art (too early to enter) in search of breakfast. B thought she was getting fried noodles with a fried egg on top, but it turned out to be spaghetti with a tomato sauce. It still tasted great. My sandwich from the same place had a Taiwanese beef patty inside and was also good. Alex drank some "fruit salad" milk which tasted just like Fruit Loops. 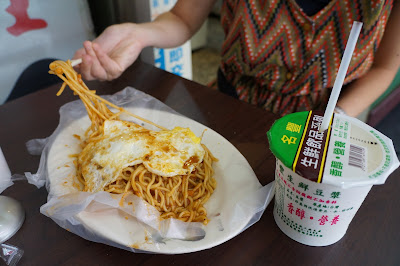 We almost chose to go to Jiufen, but instead took the easiest option of Tamsui on the northern end of the MRT line of the same name. Also known as Danshui, it sits at the mouth of the Tamsui River, which flows through Taipei.

We passed familiar Yuanshan, Jiantan and Shilin stations. Eventually the housing petered out, to be replaced by mangrove swamps by the wide river. 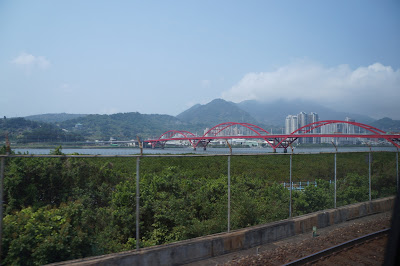 It was a warm, glaring, hazy day, but there was a lovely fresh breeze blowing across the choppy waters. We walked along the old streets, by shops selling souvenirs, crackers and vacuum packed "iron eggs", black preserved egg. 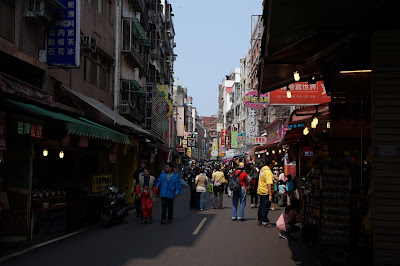 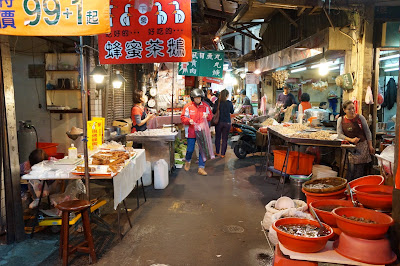 We took a detour into a narrow sheltered wet market, with stalls selling raw fish and meat, vegetables, fruits and clothes.

Then back down to the waterfront where an emigrant from Turkey sold a version of his home country's gooey ice cream. Other stalls sold grilled squid, fried pluto pups (battered sausages), and very tall softserve ice creams of their own. 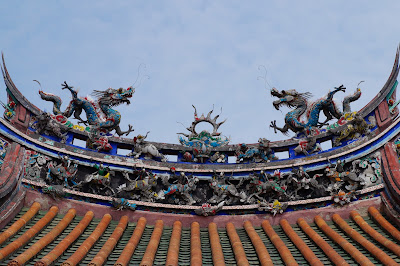 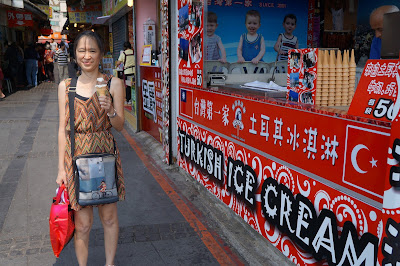 Near the Balinese thatched tourist office (the town of Bali is right across the water) there was a playground, where a young local couple we enamored with our son's cuteness. 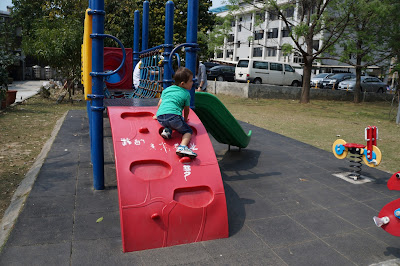 Fort San Domingo was nearby but it was our stomachs on the attack. So much so that we gave up looking for cheap local cuisine restaurants and picked an expensive looking option called Consulate opposite the fort.

It looked French and there were cakes on display out the front. We were lead out to the rear balcony overlooking the river. The menu had dishes ranging from all over, from Europe to across Asia. B chose a seafood hotpot, I had fried shrimp with apple and pineapple and we bought pasta for Alex. 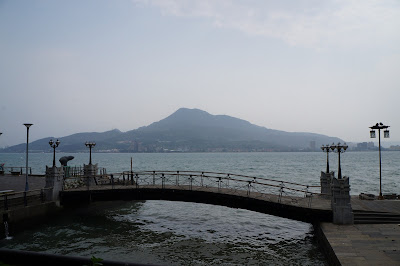 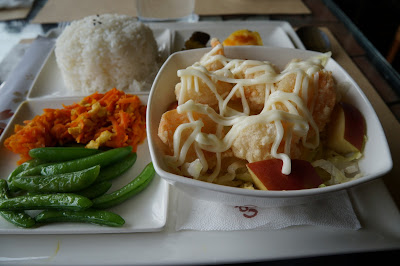 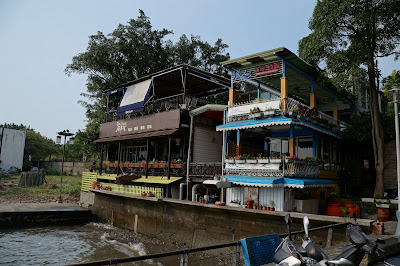 Corn soup entrees, non-alcoholic drinks and small but oh so smooth creme caramels were provided as part of the set. The food was utterly delicious, prepared to perfection. Who cares if it wasn't old fashioned Taiwanese cuisine - this French trained chef was good. And the price? About A$30 for the three of us. So cheap! Not only is Taiwan a fascinating destination, but a cheap one as well.

We walked back towards the train station along the waterfront, past small open fishing boats with eyes painted at the fronts, a Mississippi style paddle steamer berthed incongruously far from home, past temples squeezed between stalls, under the dangling roots of a fig tree, while couples, groups and individuals smiled and relaxed around us. 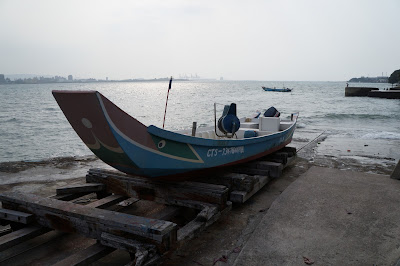 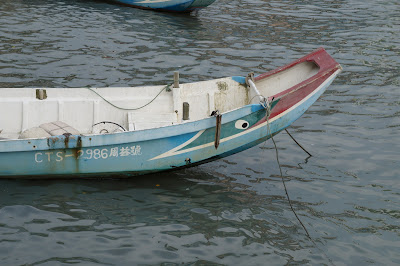 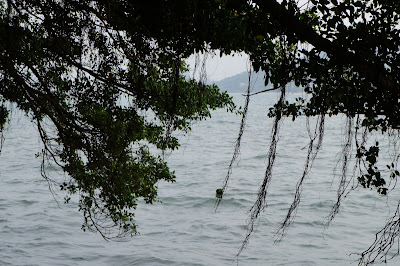 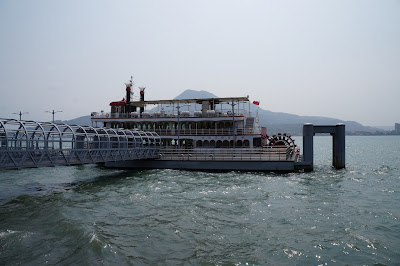 Alex saw some amusement parlours and wished he could have a go, so we let him play on a couple of grabber machines. I wasn't there to see it, because I had to make an urgent run to a public squat. That's one thing I won't miss about Taiwan (or Malaysia). At least the lobby bathroom of the CityInn II had a real Japanese bumwasher. 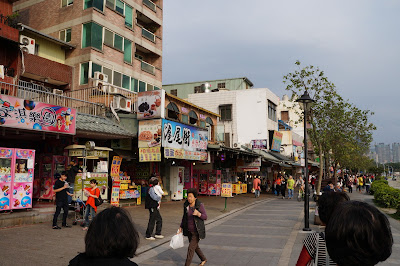 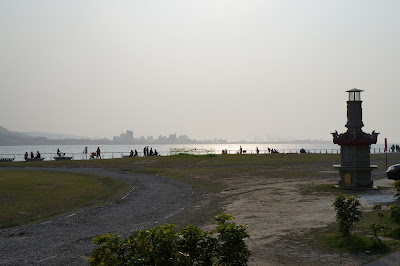 We ate one of the curly potatoes, which was just chips on a stick really, then it was time to return to Taipei's main station. To give B a chance to shop we walked through the Zhongshan underground mall, which runs all the way from the main station to Zhongshan's MRT stop. Other malls do the same on other lines, so they must have been part of the planning of the MRT. 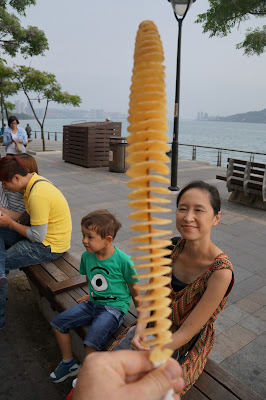 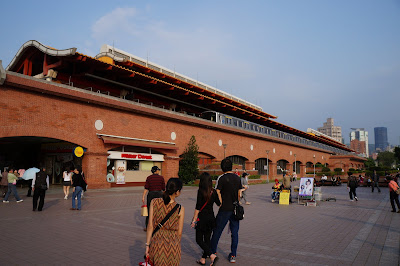 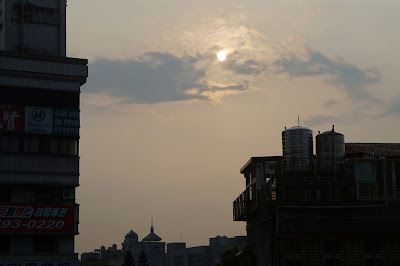 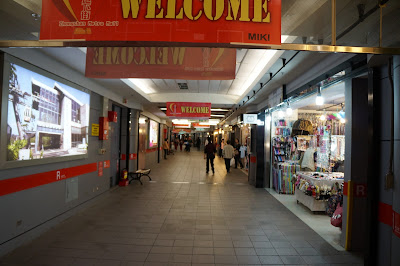 Though not particularly trendy, the shoes and clothes there were cheap.

We emerged again at the Museum of Contemporary Art, which was lit up with a big flashing heart. Dinner was Taiwanese versions of hamburgers in traditional buns and flat breads, while B had yu tiaow and soy milk. 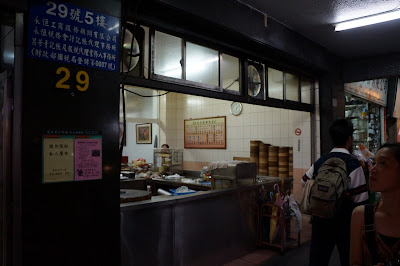 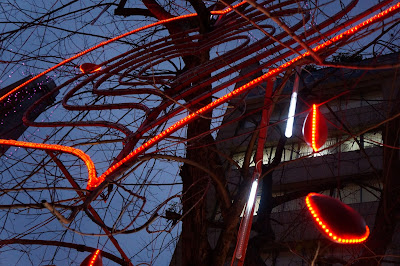 Then we collected our bags and trudged back to the train station. Our flight to Tokyo leaves at 6.50am, so I had booked us into the Novotel near the train station. There are a few ways to reach it, but I wanted to give the High Speed Railway (HSR) a go. The trains are comfortable Japanese Shinkansen derivatives, so very familiar, which whipped us to Chingpu Taoyuan station in less than 20 minutes. Then a bus transfer to the hotel (and airport). 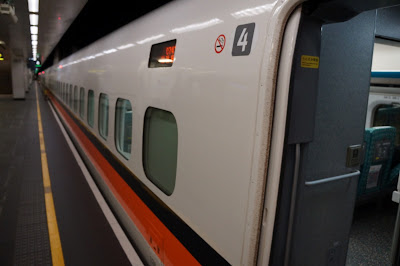 I wish that we had arrived at this hotel earlier. Alex went straight for the wooden blocks of the children's area while I checked in with the friendly staff in the funky lobby.

We had been upgraded to a very cool looking executive room and there was a fruit platter awaiting us, along with tickets for welcome drinks at the bar and a view of the airport out the window. Even more amazing was the giant panda stuffed toy sitting on the lounge. Alex jumped all over him and snuggled him. 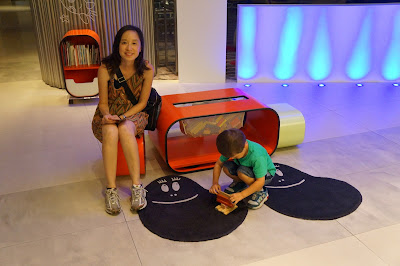 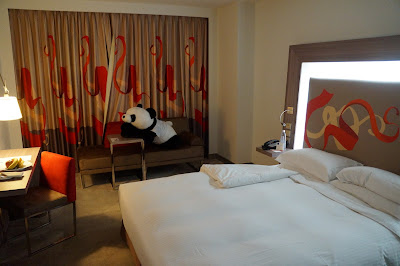 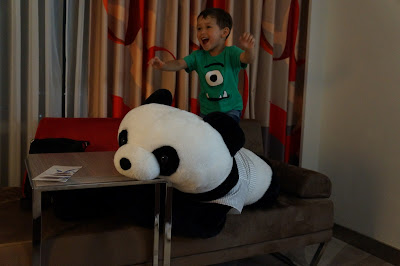 B was still hungry, so we went back down to the ornate looking Chinese restaurant, where we ordered mango and pineapple chicken and a Sichuan cold chicken dish. Finally I got a another chance to taste Taiwanese tea, oolong this time. I couldn't believe the tea at lunch was from Sri Lanka!

B returned upstairs while Alex and I stayed down for the welcome drinks. While they made his chocolate milkshake and my slushy (aren't we so sophisticated), we discovered another kids area with a Wii, big cushions, more wooden blocks and... wooden train tracks. Alex has missed his blocks and tracks so much during this holiday. They are bulky and heavy, but Alex loves to build things with them so much, and I was so happy that he had a chance to do so here.

I call on more hotels out there to provide toys and activities for kids. It makes such a huge difference when you are away from home so long. I suspect that we will try to include this hotel into our trip should we return to Taiwan in the near future.

And I think we will return. There is so much left to see and do in Taiwan that we have barely scratched the surface. Sure there are language and food difficulties (mainly relating to language), but the people are friendly and helpful and there is plenty to eat no matter what taste in cuisine. I look forward to return.

Tomorrow it is a wake up at 4am for a 6.50am flight (thanks Scoot!) to my favourite place of Japan.