After spending the year flying around the Asia it's time for a holiday closer to home, time to show Alex my old home. Time to give the car a nice long drive as well. But how would our increasingly active toddler cope?

Very well, as it turned out.

One of the biggest challenges turned out to be booking Kita into a boarding kennel. After a day of ringing around all over the state we finally found a boarding vet in Bexley. But a 10:30am drop of time meant that our departure from Sydney was delayed. 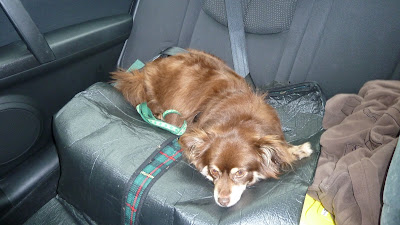 Eventually we made it on to the M5 and began our journey out of Sydney. It's a very familiar journey, one we have done many, many times. I used to live in Canberra, B in Albury for a year. At least every fortnight we would drive up or down to visit each other. And there have been countless drives between Sydney and Canberra over the years.

I find the drive along the Hume Highway between Sydney until the turnoff to the Federal Highway visually boring, though outside of Sydney we saw parachutists descend towards the road before swinging away to the open fields.

As it was already past Alex's early lunchtime we searched for rest areas to stop and eat lunch, but then he fell asleep, so we kept going. He woke up as we turned off towards Yass rather than Canberra. The landscape turned now to rolling yellow hills poked through with granite boulders. There were signs of recent heavy rains, flooded dams and fields of water.

Giant windmills atop one hill formed a huge kinetic sculpture. I can't understand the complaints about these power generating windmills. They are amazing to look at. 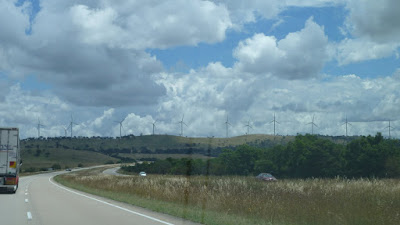 We pulled into a rest stop and hauled out our big Esky of Christmas leftovers. Alex was highly amused by the huge numbers of flies buzzing around us. "Shoo! Shoo!" 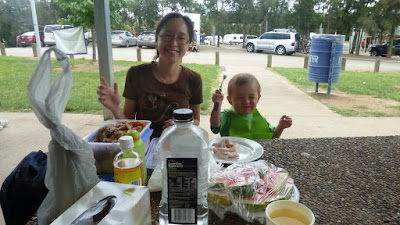 Almost as soon as we drove out the skies turned dark grey and the car was hit by very heavy showers. Outside we saw flashes of lightning. The dramatic grey skies contrasted beautifully with the golden hills still bathed by light. 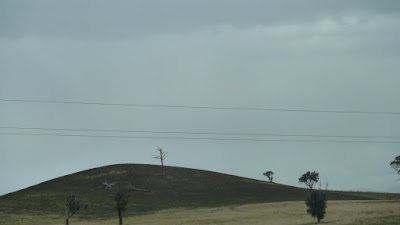 Soon the skies were blue again. There have been changes to the Hume since our last trip. More and more towns have been bypassed. This time it was Coolac and Albury. It might lead to a faster journey, but it makes the journey less interesting. 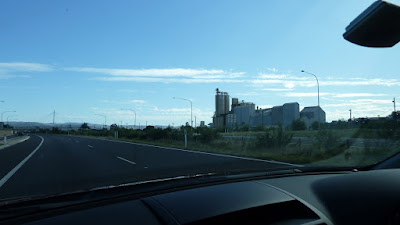 It's funny though how some things don't change. The drive out of Sydney, and the last 100km to Albury. Hurry up, are we there yet? It's not Alex asking, it's always me.

As we approached the Victorian border we were suddenly hit by swarms of locusts. Then when we turned off the highway towards our destination of Beechworth the swarm got worse. Splat, splat, splat! 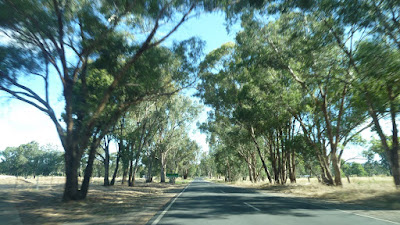 Finally we pulled into our motel in quiet, historic Beechworth, looking much as we remembered it, though a surprising number of buildings, even a church, were up for sale. 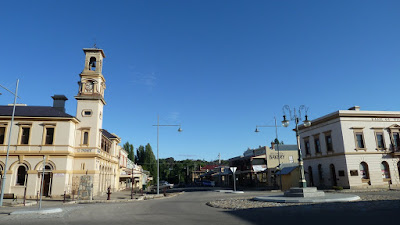 Back to the motel in time to watch the Doctor Who Christmas Special and another meal of Christmas leftovers.

Alex was fantastic on the trip. Much of it he spent asleep or singing along. He only complained when he was hungry, and that's fair enough.

The worst part of the trip? A few years ago we drove down to Melbourne one Boxing Day, stopping by the rest areas in the heat and while B slept I listened to the Ashes cricket. This time I switched on the radio to find Australia 6/77 then all out for 98. No way I wanted to listen to that!

Going down to Melbourne today.