June 02, 2010
It's very difficult to travel light with a child in tow. Nappies, clothes, books, toys and other amusements. So it was that we were dragging two big roller bags, a heavy daypack and, of course, Alex in his backpack, along the streets of Shanghai. It was probably quite a sight for the locals.

After dragging the luggage down the stairs, we caught the metro from East Nanjing Road to Longyang Road. We could have continued on to Pudong Airport, but instead I wanted to give Alex a new transport experience: maglev!

The tickets are expensive (for China), the city end of the terminal is nowhere in particular and the journey time is only around 10 minutes. Magnetic levitation trains are expensive to build. However, I was reading a recent Scientific American article which said that they can handle steeper gradients (not an issue in Shanghai) and require less maintenance than conventional high speed lines. The Japanese Shinkansen requires an army of thousands of workers to go over the tracks each night. You begin to wonder if countries like Australia, Britain and the US are prepared to engage in that kind of infrastructure maintenance. 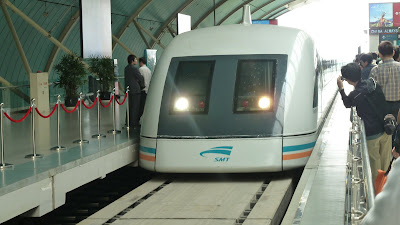 We dragged the luggage through the metal detectors and shortly afterwards a Maglev train arrived. Despite the tour group crowds we got a three seater row to ourselves. Then we glided off with barely an indication of the acceleration (unlike the Shanghai metro, which jerks you off your feet each time it starts up).

Before we knew it we were at 431 km/h and decelerating again. Alex was busy staring out of the window and seemingly excited, which made the "detour" worth it. 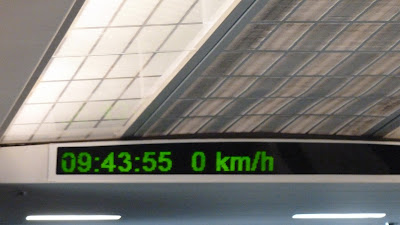 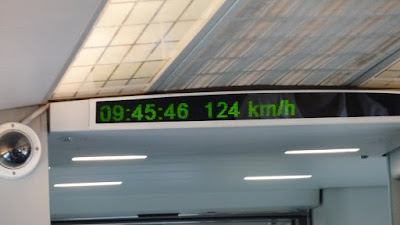 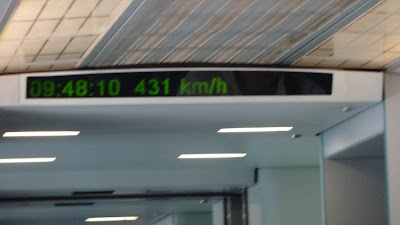 Shanghai's Pudong airport looked so much nicer in the day, very shiny and clean. The check in a bright and spacious. Checked in, bought some last minute Expo souvenirs, then passed through immigration and security. Both times that we have passed through Shanghai immigration the lady police officer has smiled cheerfully. We gave an extremely satisfied on the little performance rating device on their desks. 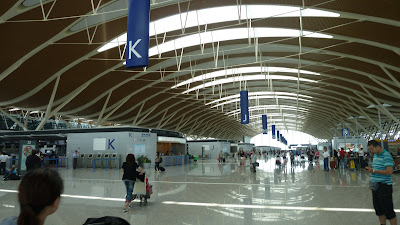 The very long Terminal 2 has superb views out across one of the airport's runways and out to the flat ocean. Apart from the numerous Chinese domestic flights we could see airlines such as Lufthansa, Asiana and Aeroflot waiting to depart. 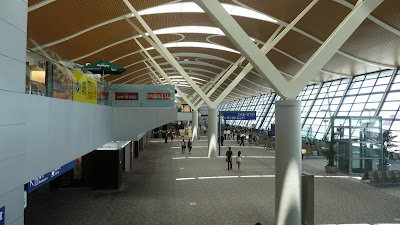 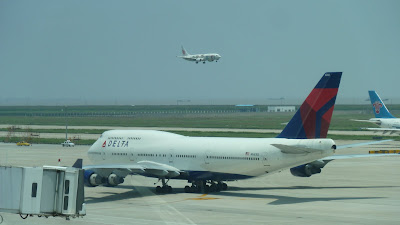 Both B and Alex were hungry and couldn't wait for onboard meals, so we dined at the restaurant level, dumplings for B, chicken and broccoli pizza for Alex (the strange kid loves broccoli). It was a slow process feeding Alex, so there wasn't much time to browse the rather expensive duty free shops below. Alex had fun running around the terminal.

There was already a long queue at our gate when we arrived. I had thought that we were to be flying on a Boeing 777-300, a new aircraft for me, but instead it was a Cathay Pacific 747-400 waiting at the gate. Oh well, the venerable old birds, now being phased out by many airlines, are probably my favourite aircraft to fly on. 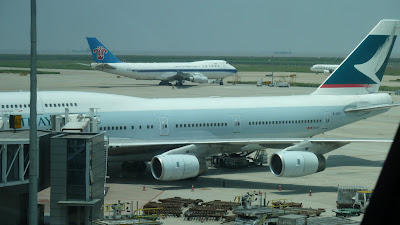 Also unexpectedly, we were seated on the bulkhead row at the front of economy, just forward of the wing. Initially I was disappointed, but then I realised that we had a lot of extra legroom and Alex couldn't annoy anyone in front of us. His presence must have irritated the aisle passenger in our row, because he took his precious little iPad toy and moved away. 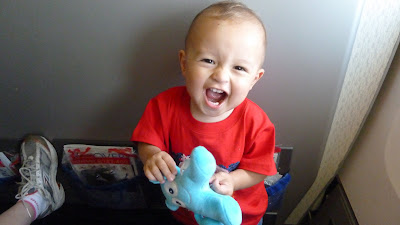 The Cathay attendants were very helpful and unexpectedly brought us the kids pack of stickers and colouring in materials. The sudoko puzzles were a bit too advanced for Alex, as was everything else. There was also a pack of two nappies and creams, but no wipes. I had to say that, although the Cathay staff were very quick to respond to requests, they lacked the warmth of their Qantas counterparts. 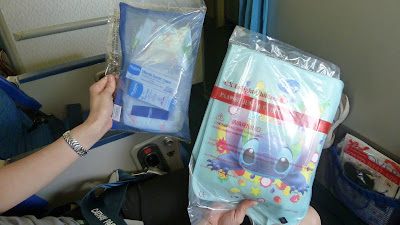 They did let me change his nappy while taxiing, saying that I could read up on the safety briefing later.

Taxiing out to the runway at Pudong airport took forever, which the Australian pilot blamed on congestion. It certainly seemed very busy, but the nearest runway to the terminal was being used for landings only, so we had to traverse much of the airport before we could take-off. 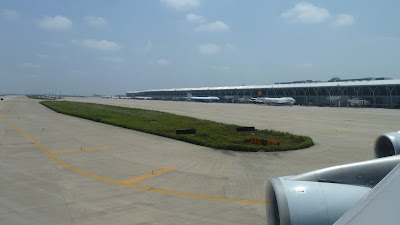 Alex was asleep before we took off and I found myself nodding off a few times. I love the way that the 747 takes so confidently to the air. We flew up over the paddy fields and over a brown sea muddied by the output of China's rivers. The coastline was dotted with islands, most seemingly developed. 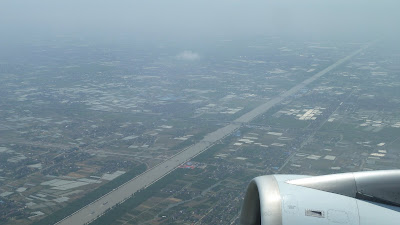 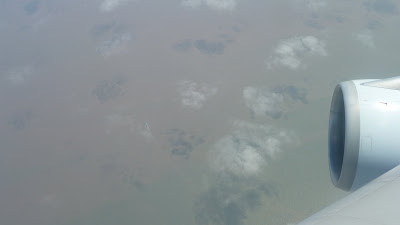 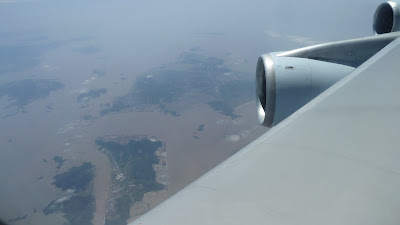 Lunch was served, chicken and rice for B, fish and spinach fettucine for me. We had to eat separately as there was not enough room for a tray table and Alex on the lap. The food was rather ordinary, especially in comparison to what I've had recently on Qantas (and no, I'm not just talking business class!).

Alex was given jars of baby food. He insisted on feeding me spoonfuls of cold pureed chicken and corn mix. It was dreadful! Yes Alex, now I know how you have suffered,

We were seated in a renovated Cathay cabin. Their hardshell seats were comfortable in the upright position, but awful reclined. At least the widescreen StudioCX inflight entertainment system was fantastic, with a lovely high resolution screen and at least three decent soundtrack CD's to listen to. I setup a playlist of Thomas Newman's Revolution Road (*yawn*), James Horner's Avatar (good flying music, had intended to listen on my MP3 player), and Nicholas Hooper's Harry Potter and the Half Blood Prince (good music I already own). Pity that the random function wasn't very random. and they used the old moving flight map.

The flight was a little bumpy, maybe due to the topography and the weather. We hugged the Chinese coastline and below us were some fantastic views of China from above. Cities and mountains, rivers and dams, estuaries and islands. And when we flew above the clouds it really looked like we were flying intercontinental. I love the 747! 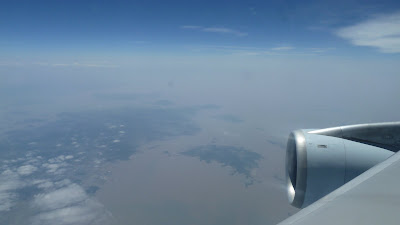 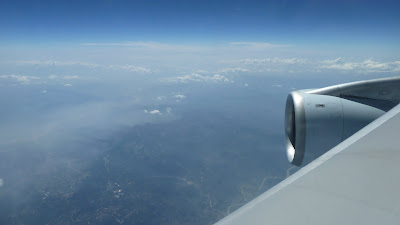 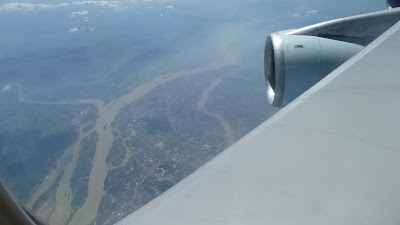 When he was awake, Alex was very difficult on this flight. He cried and complained, struggled to get free, everything we feared with flying with a toddler. It was a relief when we descended through the thick grey clouds into a wet and miserable looking Hong Kong. 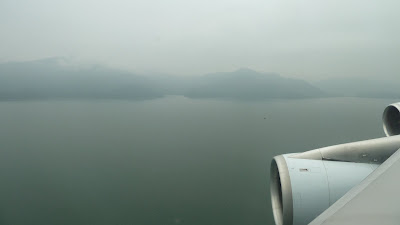 Once inside the terminal we were ushered through a priority lane for immigration, though the official with the silly haircut was rather unsmilingly in comparison with his mainland counterparts. Then we were into the arrivals area and ready to catch the minibus to our hotel, the Novotel CityGate. 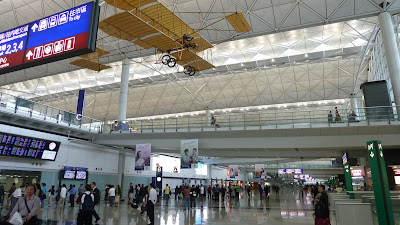 I had stayed in this hotel during my Hong Kong transit a year ago and been highly impressed by the rooms. So was B, but we discovered that the room, overlooking the pool, had no bathtub. I called reception and requested to change. They said they would see what they could do in 10 minutes time. We waited, then there was a knock on the door and a staff member with a trolley to move us.

Unfortunately, the bathtub rooms are not as nice as the shower only rooms and the view of the cable car and airport is not as nice as the pool and waterfall view. When they say airport, it's not like you can see much of it either, planespotters. Instead we could see a children's playground outside (must take Alex). Oh well, at least we had a bath.

Time then to explore the adjacent CityGate outlet shopping centre. I was disappointed to see that a couple of favourite shops, including the place I had bought my shoes and another that sold Sony goods, had both disappeared. At least the kids clothes shops were still there.

It felt a little strange eating Malaysian and Vietnamese cuisine in the food court, though the quality was reasonably good. The huge supermarket was a lot of fun too, with brands from all over the world.

When we returned to the hotel I was so tired that I just bathed Alex (yay, a decent bath with clean water at last!) and dropped fast asleep. Too tired to blog or upload pictures straight away.