A night by Botany Bay

November 04, 2008
Realising that this would probably be the last anniversary for a long time that we could spend alone as a couple B and I stayed Sunday night in a hotel at Brighton Le Sands. The Novotel Brighton Beach has a pretty poor reputation amongst my work colleagues, but it was there that B and I spent our wedding night. That time, along with our subsequent visits, have always been enjoyable experiences. Indeed we have a great fondness for the beaches around Botany Bay.

I will admit that one of the attractions for me is that Sydney's major airport juts out into the bay's otherwise serene waters and I can watch and dream as the big jets fly over the bay. 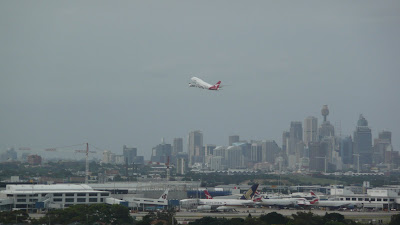 Our hotel room was high up on the cornered ziggurat building, overlooking the bay, the airport and the city. Sadly the hotel had changed since our last stay. The large Balinese-style decorative pool and waterfall had gone, converted into additional outdoor bar seating. So too has the waterslide disappeared, now a children's playground. I had loved both. 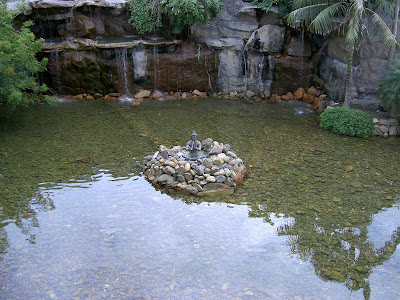 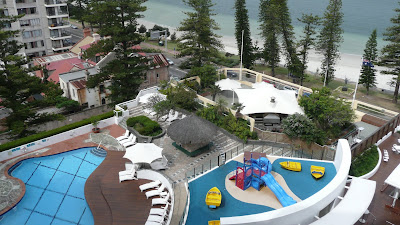 Now
When we had arrived late in the afternoon I was already a little disappointed. The hot days of the past fortnight had been replaced by a cool and dreary overcast day. Nothing weather, I thought.

However, there was champagne (untouched) and chocolate dipped strawberries waiting in our room in celebration of our anniversary. And the low clouds lifted, revealing a more interesting cloudscape better for silhouetting the beach and the aircraft.

As a weary B slept in the soft, soft bed I sat on the balcony and watched the activity outside. Through my binoculars, a wedding present, I could see planespotters crowding around the runway fence.

Watching those aircraft take-off and land wasn't about the actual aircraft themselves. It was about the adventures they represented, the memories and dreams. Seven years ago one of those Qantas 747's had flown us across to London en route to our honeymoon in Paris, to Tokyo and Singapore later on. Staring in through those portholes, listening to the roar of the engines as it gathers speed down the runway, I was inside the aircraft once more, setting off on another journey.

As evening fell B was too tired to walk, so I set off alone along the beach. It was wonderful to feel the sand beneath my feet, to watch the wading birds frolic in the shallows. I saw long thin worms leaving squiggles in the damp sand, felt squeamish. Windsurfers raced along the bay. The path to the mouth of the Cooks River was blocked by the construction site for the new desalination plant pipeline under the bay. 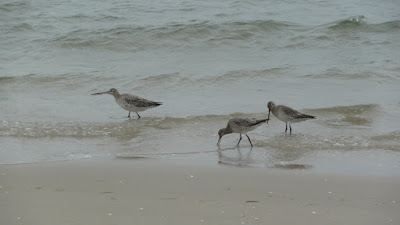 I had already walked quite a few kilometres earlier in the day as I sought to tire Kita out along the Still Creek firetrail near our house. Poor Kita was left to guard the house in our absence, but he was too exhausted to care.

Upon my return to the hotel we treated ourselves to a fine dinner in a nearby restaurant. The hotel's room service menu also looked delicious, better than their actual restaurant. Our dessert was gelato from the shop beneath the hotel. Green apple gelato, just like on our honeymoon.

Early mornings are my favourite time at Brighton Le Sands. The morning Sun shimmers across the calm waters against a hazy golden grey backdrop, it is a beautiful sight. I stepped out on to the balcony just in time to watch an A380 land over the water. 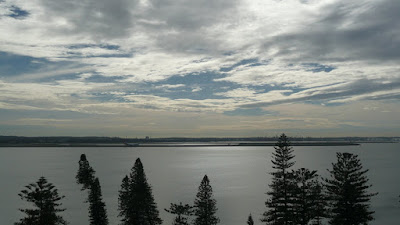 While B continued to sleep I went down for a dip in the hotel spa. I'm not certain that I would have risked the cold waters of the swimming pool had it not been closed for cleaning.

The big buffet breakfast was unfortunately rushed due to an appointment at the hospital. I love these hotel breakfasts, but they are best enjoyed over multiple mornings so that you can sample the choices properly, rather than feeling the need to try everything. A sit down breakfast together is such a rare event on weekdays that it is to be savoured.

I felt so calm after our stay, so relaxed. In my ideal journey I would stay the night there before setting off on a journey overseas late in the day. Watching the other aircraft take-off would set me in the mood, while relaxing in the pool and walking on the beach produces a sense of contentment that makes the start of the journey so much more enjoyable. I look forward to sharing it with our child.