July 08, 2008
How do I write this blog when I'm out there on holiday? My routine is usually as follows.

We return to the hotel room generally not earlier than 8:30pm after a day exploring and travelling. While B kicks off her shoes and showers I swing into action. The first task is to setup my notebook computer, a gorgeous little Sharp CV50F Muramasa that I bought second-hand in Japan. It weighs less than a kilogram, and is not much larger than a hardcover novel and much thinner. I can easily carry it around in the notebook section of my daypack or lock it away in most hotel room safes. Even a 14" laptop is too big and heavy for this - I've tried it on my way to work. The Muramasa runs a Japanese version of Windows XP, has a slow processor and no optical drive, but it is super portable and does what I need on the road.

Into the Muramasa I plug a Western Digital Passport 160GB portable hard disk. Like the notebook PC, the Passport is also very thin and is entirely USB powered, meaning one less powerpack to carry. I use the external hard disk to store my photos as the notebook only has a 20GB hard disk. The notebook does have a built-in SD card reader, so I plug the SD card from my camera into this as I find it works better than copying the files over a USB cable and that's one less proprietery cable to carry. In the meantime I am recharging the camera's battery.

Picasa is my software of choice for transferring and organising my photo albums. Once the photos are in Picasa I then upload them to my Picasa web album as another backup against loss. This saved my bacon once when I deleted my photos of Beijing's Temple of Heaven by mistake. I have paid for extra storage on the Google servers as I don't bother to edit or cull photos: I just don't have the time.

I try to choose hotels that have room internet access, especially free access as I would rather use my own computer than go to an internet cafe. Access can be expensive, especially in the big name hotels! My notebook has built in wifi access (which is good for blogging from bed), but I need to use a USB LAN dongle for wired ethernet connections.

In the half hour or so while the hundreds of photos are uploading I'll be off doing something else. Once the process is finished it's blogging time! I use Blogger as my blog software, generally typing directly into the web browser. Occasionally, say on a long train journey over familiar territory, I might have written some content offline on my Zaurus PDA (more about that later). Images are linked in from my Picasa web albums. Then I publish and can go to bed, or view some other websites.

Generally it's midnight or later by the time everything is finished. Sometimes I do regret spending so much time on the blog, time that could be spent resting, relaxing, reading or watching some videos on the computer, or just being with B. But I also enjoy reading my entries later on and regret that I kept such a scant diary on some of my earlier trips. 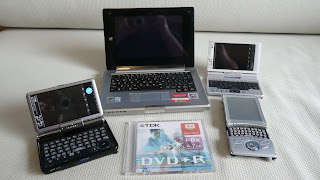 Clockwise from left: Zaurus C3100, Muramasa, Zaurus C700, Zaurus SL-5500
The above process has been refined through numerous trips. Today we are starting to see decent, highly portable mobile PC's sold in the west, thanks to Asus' Eee and more hotels have internet access. When I first started travel blogging things were more difficult.

My first go was in 2004 during a trip through Europe via Korea. At the time I was studying an online course in astronomy and had to write a couple of essays and participate in newsgroup discussions during the trip. So I had no choice but to go online regularly and to carry a computer.

The problem was the computers that I brought with me. I had a couple of Sharp Zauruses, a SL-5500 and a C700. These are both handheld PDA-like devices that run the Linux operating system. The 5500 has a slide-out keyboard while the C700 is a clamshell design with a VGA screen, a real micro-notebook PC.

By default the Zaurus comes with a cut-down office suite and basic email and web capabilities. I had flashed the C700 with another version of Linux called pdaXrom that allowed it to run many full scale versions of Linux software, thought it was really too demanding for the poor little device. I also had a wireless compact flash and dial-up modem cards that I hoped to use to connect while travelling.

Before I left Australia I printed off a list of global roaming internet service providers in each of the cities we intended to visit. Unfortunately, I never could get global roaming (GRiC) dial-up access to work. I did have free wireless access in a couple of hotels, which was always much nicer than using hotel internet kiosks with their regionalised keyboards.

When I did have internet access I spent most of the time researching astronomy, responding to emails, posting astronomy related information and checking timetables. Blogging came second, it was brief and I could never post any pictures. Looking back now, I'm disappointed by the lack of details in my posts.

A year later we were back in Asia and Europe and I had a new toy, a Zaurus C3100, imported direct from Japan. This updated model is faster, had a built in 4 GB hard disk and was capable of acting as a USB host, meaning I could plug external devices into it, including an ethernet dongle.

Unfortunately, I lost the cable that enabled USB hosting at Changi airport when leaving for Europe. I couldn't find another cable anywhere from London to Tokyo (funnily enough I found a number of shops selling them within a quick walk from our house!), meaning I only had wireless access, a problem because a number of our hotel rooms were only equipped for wired access. I solved this by purchasing an Apple Airport Express, which I hooked up to the wired LAN port and output wireless access!

I still couldn't post my images, though this was a problem with my website, not the Zaurus. But I did manage to post more detailed descriptions of our trip.

In 2006 we visited Japan again and here I also used the Zaurus C3100 as my blogging tool. I now had image manipulation software with me (GIMP) and image upload support enabled. But due to limitations in the browser software of the Zaurus image uploads still proved to be difficult. Certainly I couldn't post a whole album while on the move. However, by the end of this trip I had the Sharp Muramasa notebook PC that I have used on all of our subsequent holidays.

I still like the Zaurus for taking quick notes - it's instant on/off and portability is great for writing in trains and its battery life is also superior to the Muramasa. But for posting these long tracts and hundreds of images, a full PC can't be beat.

More recently I have purchased a Japanese version of a Sony MyLO, which has built-in WiFi, we browser, RSS feeds and keyboard. This should prove to be more convenient than the notebook for connecting online in situations like airports and cafes. It's yet to be tested!

Finally, there is the mobile phone! I have a Motorola V3x 3G mobile and, with global roaming enabled, it has proved a useful tool for keeping in contact while on the move. The best example was in China, sitting on a train and receiving an SMS about my niece's birth, then later on sending emails to a travel agent to change our itinerary via a 2.5G connection.

Many blog systems allow you to post via email and I have sent in short blog entries via my mobile phone when other connections are unavailable.

My perfect blogging-on-the-go tool hasn't been invented yet, but miniature computers are becoming more and more popular so I don't think it will be too long before it does. And then all I'll need is the money to buy one and the holiday to use it!